Collective West against Eurasia. Sanctions and countersanctions. People should not suffer from external economic pressure. High responsibility of labour team leaders. What other topics were tackled by the President at the meeting on countering the sanctions measures taken against Belarus.

Sanctions are not a pleasant issue, but still not fatal. In fact, through almost all its sovereign history, Belarus has lived in conditions of external economic pressure. Somehow it makes us stronger, sometimes more flexible, teaching us to respond quickly to challenges. This is not an easy path, but it works. Therefore, Aleksandr Lukashenko asserts, “Another set of measures has been introduced against us. Despite the fact that they will have a certain negative effect, we need to continue to live and work in peace, preserving the dynamics of the work of all sectors of the economy.” 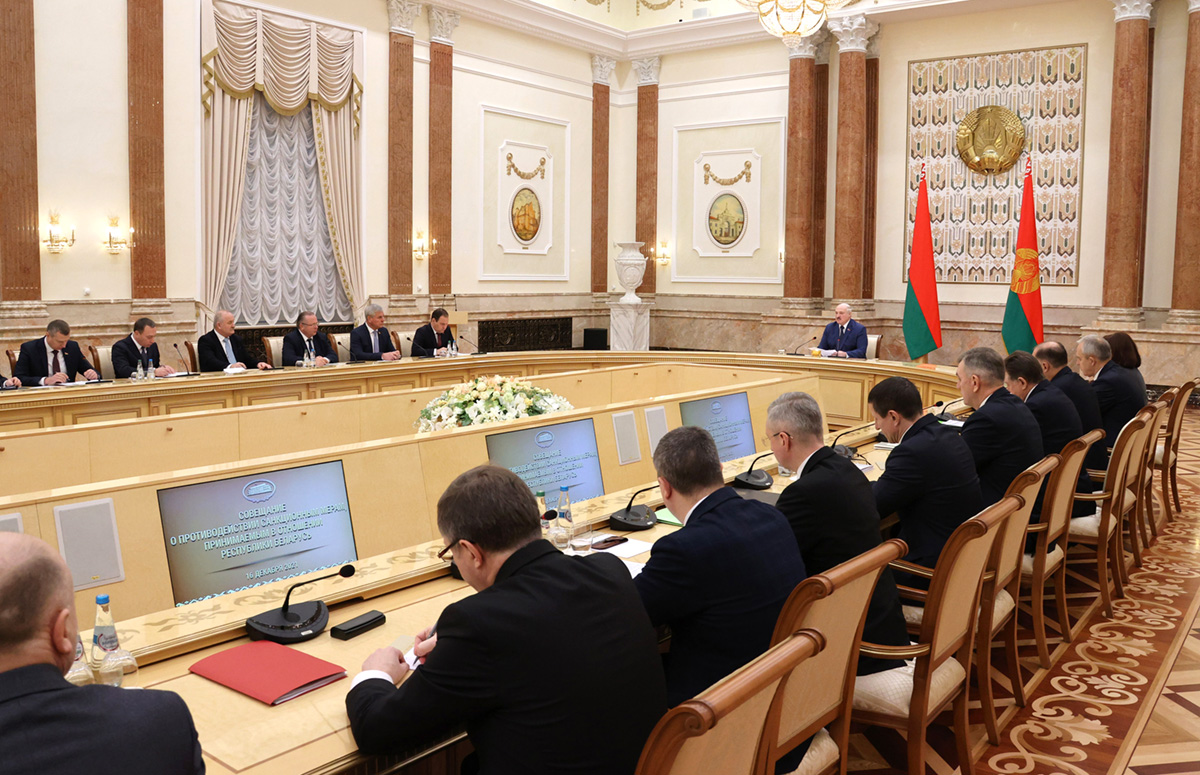 Addressing the participants of the event, Aleksandr Lukashenko noted that the sanctions are not something new, “There are many countries in the world against which unreasonable and discriminatory measures are constantly applied. An example of this is our neighbouring Russia. Unfortunately, this has become the norm, and no one even looks at the violation of international law. One gets the impression that common sense has left those who make such decisions.”
The Head of State drew attention to the background and consequences of the economic aggression against Belarus,

“The collective West does not abandon its attempts to reduce the level of integration interaction in Eurasia. And when it comes to pressure on our economy, the blow is also aimed at the welfare of Belarusian citizens.”

The President emphasises that sanctions exist, and this should be perceived as a given. It turns out that now the task is to learn how to live and work in such realities. The Head of State pointed out that sanctions have already become a part of our life, “Therefore, I would like to hear not so much an assessment of the possible consequences, but proposals for minimising their impact and countermeasures.”
The country is going through a difficult time. In this regard, the President outlined the task of the entire vertical structure of power,

“We are experiencing one of the most difficult stages in the life of our country: sanctions, COVID, attempts to undermine stability from inside in order to change the state system. However, in spite of these and other challenges, it is necessary to prevent deterioration of the main economic indicators and — most importantly — to protect people and to preserve their well-being, at least at the level of the current year.”

The President demands, first of all, that people do not suffer under the conditions of external economic pressure,

“Here the issue should be considered from at least two positions: saturation of the market with necessary goods and the inadmissibility of price rises. I strongly warn everyone present about the need to observe both conditions.”

Today is not a situation where our opponents will leave us alone and the President pays special attention to this,

“Nobody promised us a quiet life as we are fighting for our land and for the right to be masters on it. Therefore, now, more than ever, we need to mobilise all our resources: production, technological, financial and intellectual, so that both the people and enemies can see that we are an established state.”

To achieve this, the Government, the National Bank, local authorities and parliamentarians will have to develop a set of measures to support and develop internal potential and expand the production of goods and services in demand. Moreover, Aleksandr Lukashenko notes that this doesn’t refer to helping people with money or offering special benefits, “Often, it is enough to remove old barriers, obstacles, unnecessary approvals, and so on.”
Special attention will be paid to the domestic market and the players in it. There is also an equally important task here,

“If domestic manufacturers are ready to occupy the domestic market, where foreign competitors previously ruled, it is necessary to give the green light to such initiatives and to provide them with maximum assistance at all levels. Think about how to assist with such initiatives!”

The President clarified, “If you need additional powers, particularly for the governors, to make quick decisions locally — submit them immediately. Control will be over the final results.”
As far as the response measures that have already been taken and will still be developed are concerned, this is not an active position of our people. Aleksandr Lukashenko pointed out,

“We do not have the spirit of war in our blood, and, by the way, we did not start it. Therefore, we are always open to constructive dialogue on an equal basis without conditions and ultimatums.

I am glad that there are no signs of hysteria or nervousness in the Government and the National Bank. This business spirit must be maintained in the future.”

The President demanded to focus close attention on some of the department heads, “We need more solidity and diligence than ever! We have too many leaders who take an anti-state position.”
The President stressed that if a person leads a labour team, he is already a statesman, “It doesn’t matter whether it is a private or a public company. Moreover, if you wear shoulder straps or work in the state apparatus, you should understand where you are. Otherwise, as I have already said many times, we will regard this as a betrayal.”
The attitude towards those who have crossed the line is unambiguous, “We must deal with those who broke the law, those who pushed people to violate the law (we also have a lot of them), but this must be done carefully.”
The Head of State summed up, “We must not allow distortion, we must not shy away, we must deal with specific cases, lead people and check people on specific cases. We must be tough: who is to blame, who is a traitor, who is simply not on our side. But I stress once again: this is a painstaking, calm work of special authorities that exist in the country. I ask you to bear this in mind.”
There should be a principled position: traitors can’t be forgiven, “There will be no forgiveness for those who tried to turn the country upside down and hand it over ‘there’. We see them and identify them in dozens or even hundreds. Those organisations that were financed from abroad and organised the coup and rebellion were liquidated by us.”
According to Aleksandr Lukashenko, any funds can exist in the country, but these ‘should be engaged in a specific business for the good of the Motherland’, “Let them protect the sick, cure COVID, let them help the Chernobyl victims, the poor, the disadvantaged, people with disabilities, let them cure children and so on — you are welcome, the road is open. If someone wants to establish funds, please do it.”
In summary, the President concluded,

“This chaos must be ended today, a new Belarus must be rebuilt.”

ADDITION
The government spoke about the impact of sanctions on the Belarusian economy
During the meeting on countering the sanctions measures taken against Belarus, the First Deputy Prime Minister Nikolai Snopkov spoke about the impact of sanctions on the Belarusian economy.
In particular, he stated that the simultaneous introduction of new sanctions packages by the EU, Great Britain, the USA and Canada testifies to the coordinated approaches and coordination of actions of key western players with regard to Belarus, “At the same time, a subjective factor is characteristic when choosing enterprises that are subject to sanctions, there are no explicit criteria; in fact, unscrupulousness is applied — ‘I include whoever I want’. Obviously, if the sanctions do not work, they will intensify, and their direction is problematic to predict.”
Nikolai Snopkov also named three main areas of the impact of sanctions on the economy: the financial sector, product exports, and technology imports. As far as the financial sector is concerned, the key risks are concentrated in the ability to provide settlements for enterprises and in attracting external financing. The First Deputy Prime Minister gave the following figures,
“According to calculations, in just ten months of this year, funds in foreign banks were detained in the amount of up to $10m in equivalent, which is 0.01 percent of the average monthly turnover in foreign economic transactions. More than $200,000 has been blocked for the current date. That is, based on the proposed figures, the situation is far from critical.”
Tackling the issue of attracting external resources, Nikolai Snopkov said that as of December 1st, the total amount of non-residents’ funds in all banks of our country amounted to Br17bn in equivalent, an increase over this year of Br1bn. The volume of funds from Russia and China is increasing, while the funds of the EU countries are expected to decline at the same time.
Simultaneously, a sensitive factor is the sanction imposed by the fifth package of US sanctions against the Belarusian state debt: this is a direct risk of the possibility of its refinancing, including on domestic foreign exchange government borrowings. The First Deputy Prime Minister said that, in 2022, Belarus has to pay off $3.3bn, in 2023 — $4.7bn of external debts, including servicing, “At the moment, the conclusion of a new stabilisation programme with the Eurasian Fund for Stabilisation and Development with the allocation of a state financial loan by the Russian Federation is under consideration. The total amount of the requested funds is $3.5bn, which will compensate for the falling European money to refinance the debt.”
As for the state of affairs in the field of attracting investments, in the context of the refusal of most international financial organisations from co-operation with our country and other options for attracting investment funds, almost the only source of development and economic growth are internal resources and reserves.