Riots and street violence. The deaths of dozens of people, including children. This is how the beginning of 2022 will be engraved in the memory of Kazakhs. According to press reports, the situation in the country is gradually returning to more or less normal. All administrative facilities have been cleared, the security forces continue their counter-terrorist operation. Earlier, the President of Kazakhstan made it clear that there would be no negotiations with criminals. Terrorists will be killed without warning. Local law enforcement agencies have the time, energy and resources for this. They are looking for those who are involved in the riot even in the government. Some, without waiting for the investigation and trial, commit suicide. Recently it became known about the death of three high-ranking officials of the Ministry of Internal Affairs and the National Security Committee... 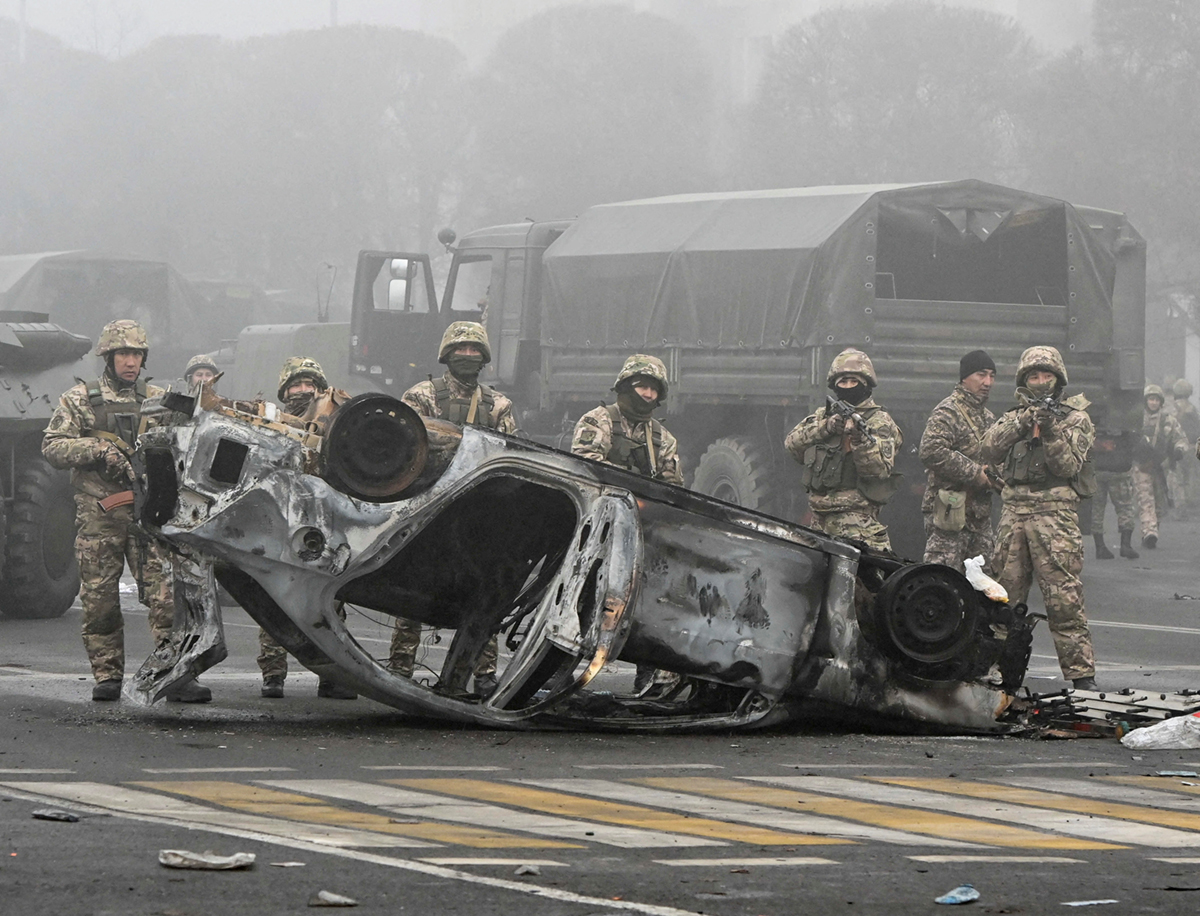 It is clear that the protests in Kazakhstan were in no way peaceful, despite the attempts of the West to present them as such. There is a well-developed scheme for the forcible seizure of power, fragments of a scenario that they tried to ‘test’ in August 2020 in Belarus. In just a few days, Kazakhstan turned from a calm country into a stronghold of revelry and banditry with numerous victims and burning buildings. At the same time, the main thesis remains unchanged for Western propaganda: the violence of the rebels is a response to the violence of the security forces. This is one of the insidious hoaxes, where unscrupulous telegram channels overturn cause and effect. Indeed, in reality, it is the ‘peaceful protesters’ who ‘suddenly’ have Molotov cocktails, machine guns, sniper rifles, grenades and other weapons with them.

The main agents of terror are not fighters for a better life, but professional provocateurs with a decent experience of urban turmoil and resistance to law enforcement.

One for all and all for one 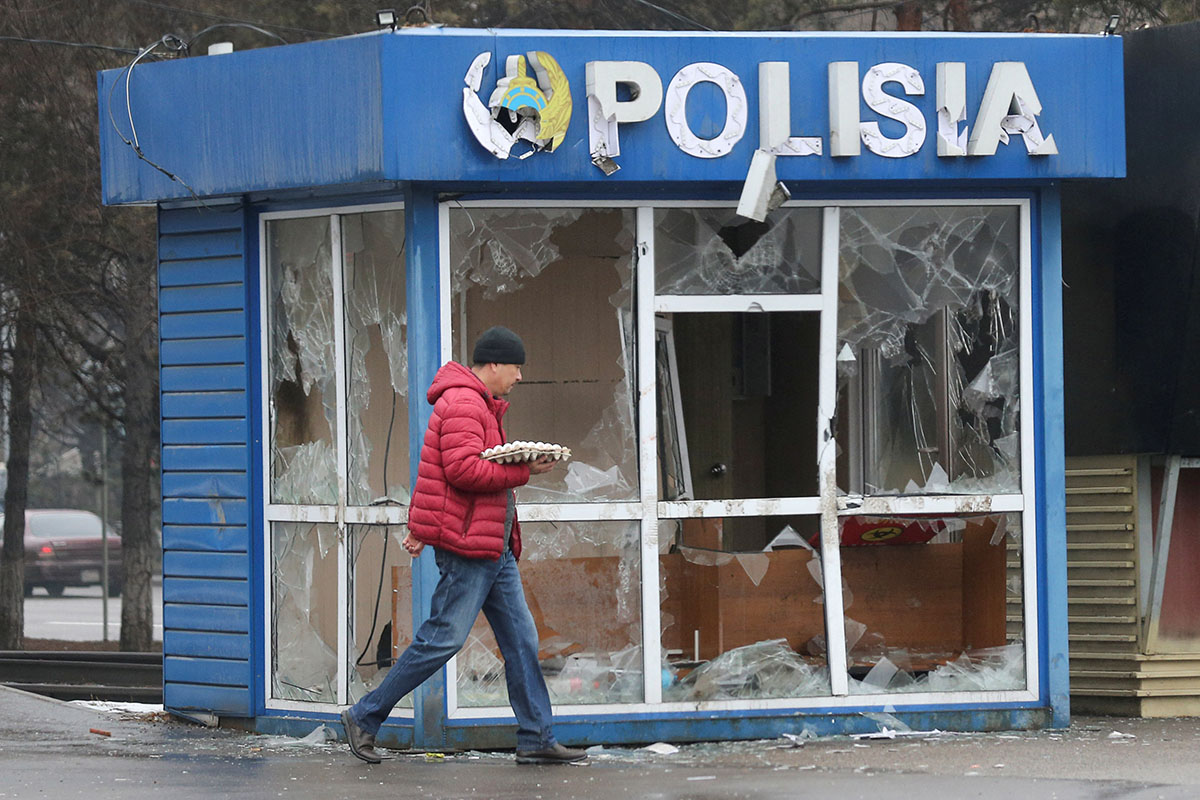 Commenting on the events in Kazakhstan, member of the Council of the Republic Igor Gedich noted that we are faced with a situation when it is time to move from words to actions. And the Collective Security Treaty Organisation, whose Charter stipulates, among other things, protection against the encroachments of international terrorists, in this case is expressly called upon to fight against terror. According to Igor Gedich, it is absolutely appropriate and necessary to provide assistance to our Kazakh brothers, “It’s time to check and feel that unity when we were one. For the first time we are witnessing the moment when the Collective Security Treaty Organisation is taking real steps to protect our partnership, our relations within the post-Soviet space, which is absolutely natural and necessary.”
After the appearance of the first peacekeepers in Kazakhstan, it became noticeably quieter. The situation was brought under control. In this regard, Sergei Rachkov, Chairman of the Standing Committee of the Council of the Republic on International Affairs and National Security, stressed that the extraordinary session of the CSTO Collective Security Council convened at an extremely important moment when it is necessary to continue coordinating the actions of the Organisation’s member states to stabilise the situation in Kazakhstan,

“The introduction of the CSTO peacekeeping forces gave a specific signal to terrorist groups and made it possible to stop the development of the situation according to a negative scenario, to stop killing representatives of law enforcement agencies, the military, looting, seizing state and public buildings, strategic infrastructure facilities.”

When money is more valuable than principles

However, the West did not even listen to arguments that the mission of the CSTO contingent is not to fight and kill, but to provide a strong and reliable rear for the military and law enforcement in Kazakhstan. US Secretary of State Antony Blinken demanded an explanation from Kazakhstan with regard to why it turned to the CSTO for help. In turn, the international ‘human rights’ organisation Human Rights Watch called on the President of Kazakhstan to cancel the order to ‘shoot without warning’. Apparently, the so-called human rights organisation believes that only ‘peaceful’ protesters are allowed to shoot without warning.

A reasonable question arises: where were you when the Poles shot, killed and mocked peaceful refugees, when they poured chemicals on innocent people and Belarusian journalists who were on the Belarusian-Polish border. Or when human rights were violated during the storming of the Capitol? Apparently, this is different again.

The events in Kazakhstan have shown that the CSTO is a real counterbalance to NATO, says Yuri Shevtsov, Director of the Centre for European Integration. The appearance of peacekeepers gave psychological confidence to the security sector in Kazakhstan and demoralised the enemy.
“We cannot know the details while the investigation is still underway. But it is already clear that the political crisis in Kazakhstan was primarily set up to coincide with the negotiations between Russia and the United States in Geneva,” noted the political analyst. “Before these negotiations, the Russian Federation put forward an ultimatum to NATO and the United States on security issues. And the importance of these negotiations is very difficult to overestimate. If we assume that the crisis in Kazakhstan could not have been extinguished if the city of Almaty was now in ruins, then there would be no clear position of Russia in these negotiations. And so everything turned out the other way around.” 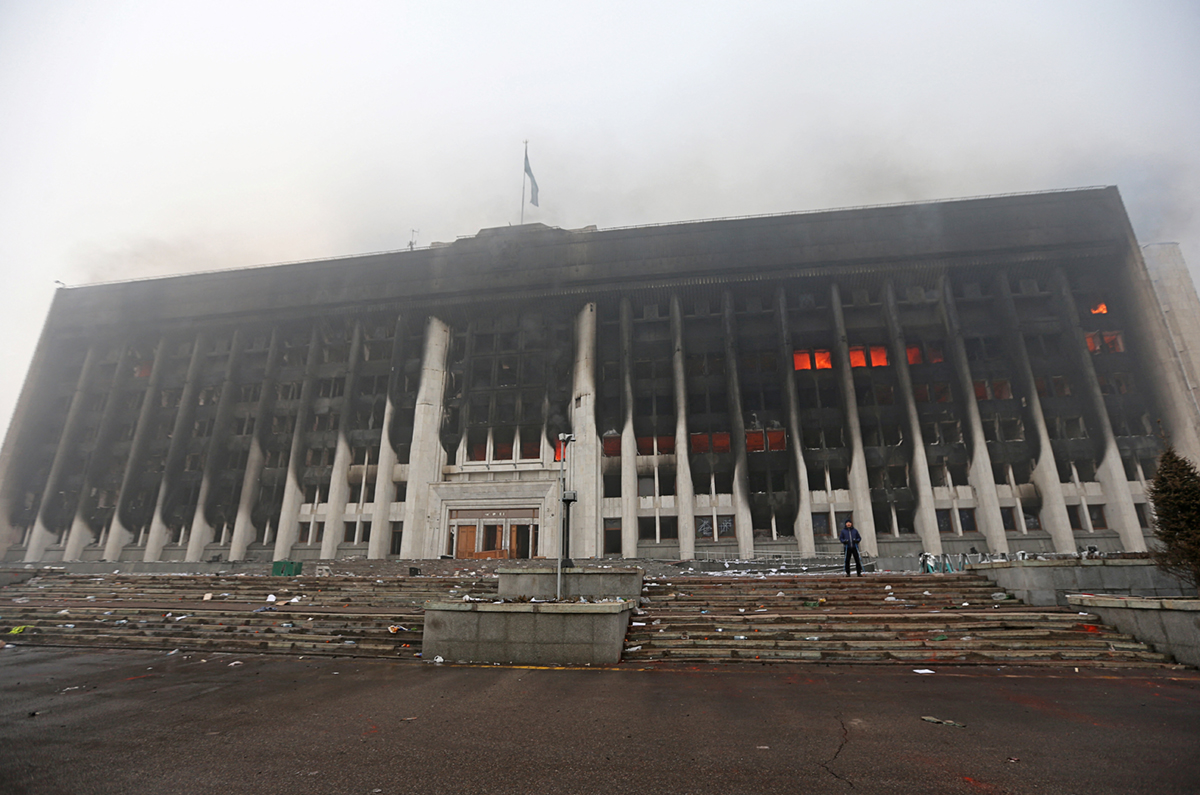 Burnt-out building of the local administration in Almaty

Kazakhstan is in the centre of attention of the world community. All these days, the Head of the Belarusian State not only keeps an eye on the situation in this country, but also actively conducts negotiations with partners in the CSTO.
Important statements and assessments made by Aleksandr Lukashenko:
►I warned you all in detail about what would happen. And so it happens. But this is not anywhere near the end. In many ways, we do not know what awaits us, but we must be ready for anything... Most importantly, everything was coordinated and planned in many cities. And the distance is thousands of kilometres. And the distances there, of course, are frantic. And frosts, and so on. But nevertheless, everything happened synchronously. It was planned. Outside interference, naturally.
► I just want to turn from Belarusians to these protesters (someone calls them bandits, different people there). I would simply tell them that well, they made some noise, shouted, that’s enough. Enough. We need to negotiate before we go far. And you can come to an agreement with President Tokayev. This is a normal person, a diplomat with whom you can negotiate. A very smart, educated person... Turning the country upside down — it will be expensive to restore it later. And there are contradictions between clans, groups, which will still have to be resolved.
► We are not fighting for anyone. There is only one company of our military peacekeepers. These are peacekeeping forces. We have informed the UN that we will help maintain peace. We did not come to Kazakhstan to kill or even fight. We are peaceful people. And our servicemen are also peaceful people. We came there to help Kazakhstanis... Now we need to stop the fratricidal war. This is what we are doing.