The situation in the economy requires prompt, but balanced decisions. This was discussed during the report to the President on budget policy in the current circumstances. Finance Minister Yuri Seliverstov was the keynote speaker. The event was also attended by Chairman of the State Control Committee Vasily Gerasimov, Chairman of the National Bank Pavel Kallaur, First Deputy Prime Minister Nikolai Snopkov and Deputy Head of Belarus President Administration Dmitry Krutoi.

“The budget is an indicator of the economy and the state of affairs in the country. I would like to hear what measures have been taken by the government to consolidate the budget. The meeting is focused on people’s wellbeing in the first place. This is the reason for which we are discussing something here, for the sake of which we are carrying out this balancing of the budget. This means salaries, our state employees, and, of course, retirees. The budget, like a mirror, reflects all our problems and today’s achievements.” 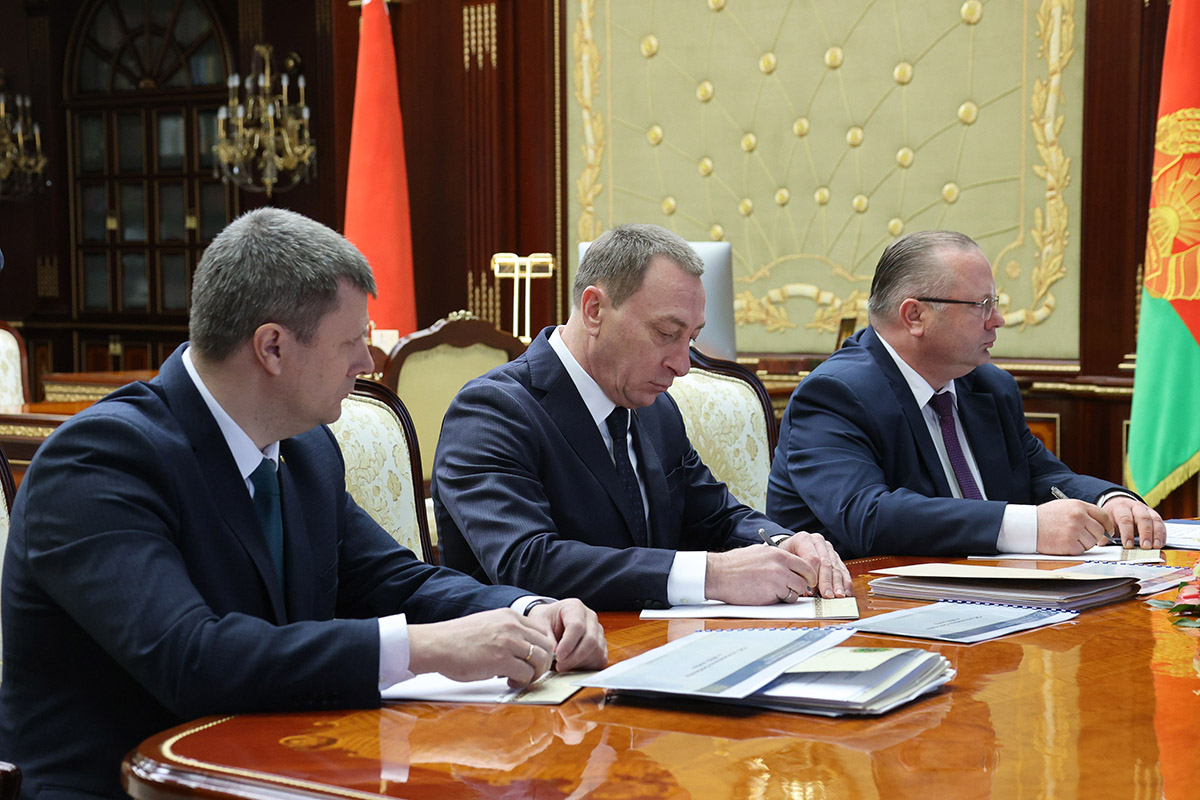 The Head of State drew attention to the fact that the Chairman of the National Bank was specially invited to the conversation, “So that those present here (and you are mainly involved in economic and financial issues in our country) understand that the economy is the number one issue. The rest, including the exchange rate, inflation and so on, comes second.

Aleksandr Lukashenko pointed out that today is not the time for professional disputes, “Realising that the government and the National Bank sometimes have different approaches to financial matters (they were, are and will be), but it is necessary to come to common solutions, so that the economy does not suffer. We need to do everything possible to keep the economy going. Then we will have a stable exchange rate of the national currency and no inflation.”
The President demanded an objective report on the situation. At the same time, he admitted that he was pleasantly surprised by the results of work for the first quarter,

“I am informed and, frankly speaking, I was even surprised, but I was glad that in the first quarter our budget even grew a little, a little more than a percentage point. But this does not mean that we should relax. There will be even more pressure against us.”

“The budget policy priorities include people’s incomes, national defence and security financing, purchase of medicines and support of the agro-industrial complex.”

After the meeting, Yuri Seliverstov explained to journalists some issues and peculiarities of the state budget policy. He also spoke about the importance of budget consolidation at the current stage, “Consolidation of the budget provides, let’s say, for gathering everything into one pool, gathering all the revenues in order to cater to the goals we have. Refusing to cover some expenses is part of it. At the same time, all expenses that are associated, for example, with the purchase of medical equipment, those things that are needed for budget facilities to function, will be financed.”
The surplus of the republican budget that formed in the first quarter, as Yuri Seliverstov noted, is a good indicator,

“The budget execution is steady. Certainly, there are new challenges we have to address. But as the Head of State instructed, all the social things, all the commitments of the state will be honoured as usual, unconditionally.”

First Deputy Prime Minister of Belarus Nikolai Snopkov:
“Despite all the complications and the difficult economic situation the government should be primarily concerned with interests of ordinary people. Not economy for the sake of economy but economy for the sake of people. Including in matters concerning today’s budget issues. People should get salaries, welfare benefits, and pensions. It is undoubtedly what the government has to secure regardless of all the difficulties caused by the sanctions-fuelled pressure.
Welfare benefits, pensions, and salaries will be paid in full and on time. As for the possibility of raising them due to inflation, the government and the Finance Ministry will consider it depending on the budget execution and inflation in order for people not to feel the problems the country is experiencing due to the pressure of sanctions…”