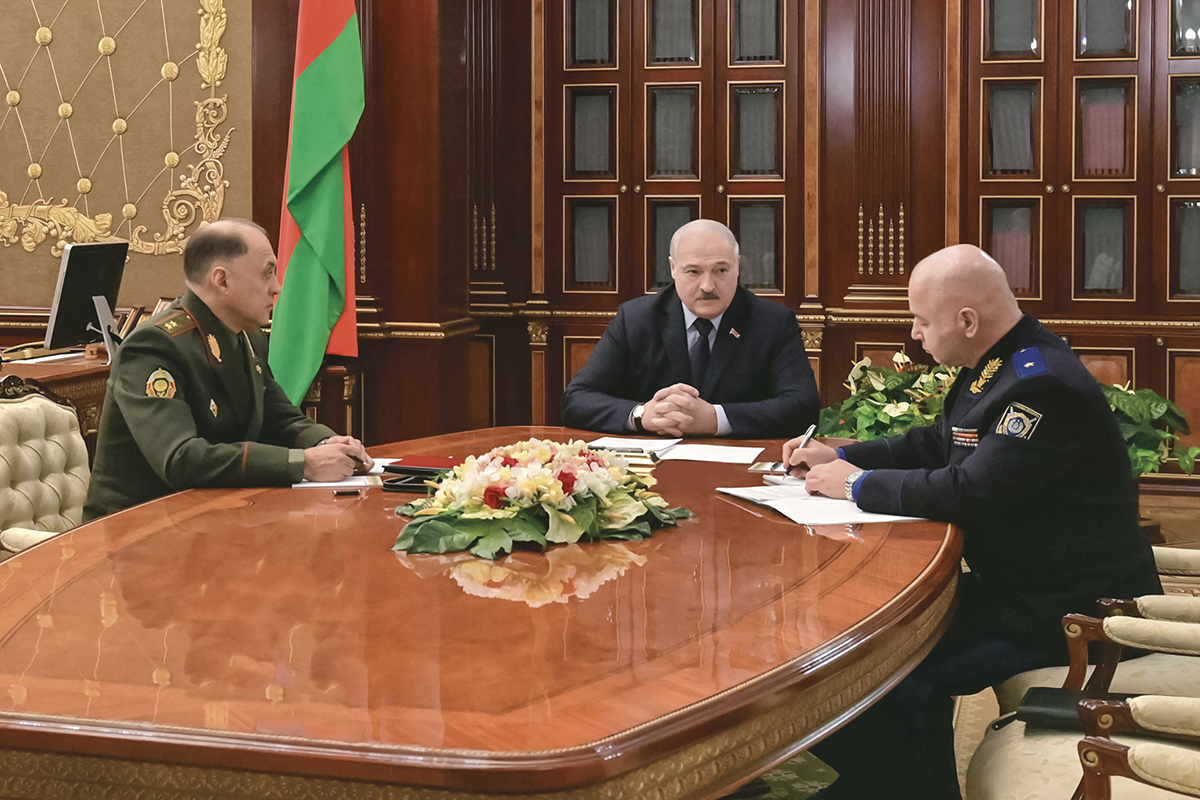 “Let’s skip self-evaluation reports and jump right into the main thing,” Aleksandr Lukashenko said at the beginning of the meeting.
The Belarusian leader first pointed the topic of countering extremism,“We had a lot of criminal cases related to extremism. There was even a backlog of such cases, figuratively speaking. Back then we agreed that we should promptly handle criminal cases related to extremism. Where are we now?”
Aleksandr Lukashenko also mentioned the creation of a cybercrime unit within the Investigative Committee.
“I come across an increasing number of media reports saying that this is a very important area of work as cybercrimes are not decreasing, unfortunately. That is why this unit was created. What is the situation in this field, how is this unit handling its tasks?” the Belarusian leader asked.
Another topic discussed at the meeting of the President with Chairman of the Investigative Committee dealt with the state of affairs in the committee itself, work with the staff. The Head of State recalled that earlier, before the appointment of Dmitry Gora, there were certain alarming signals about the Investigative Committee, “Therefore, the senior officials of the committee had to be brought to their senses. You took charge of the Investigative Committee. What has changed since you were appointed? How do the committee and its employees work?”
According to Dmitry Gora, one of the priorities of the Investigative Committee is to fulfil the instruction ‘to reduce the number of pending criminal cases related to extremism’, as well as to identify and investigate new crimes of this type together with operational services, the Ministry of Internal Affairs and the KGB.
As Dmitry Gora later told reporters, during the report, special emphasis was placed on issues of countering extremism, “This refers to the instruction of the Head of State, which was given at the beginning of this year, to reduce the balance in the extremist criminal cases. This is the establishment of criminals, bringing them to justice established by law. It was reported that the KGB, together with the internal affairs bodies, is working very hard, and quite effectively in this direction. A quarter of all criminal cases that were initiated on an extremist orientation were sent to courts in 10 months of this year. That is, we have a positive trend in this direction.”
In general, with regard to the work of investigators, the persons who have committed more than 69 percent of the crimes registered this year have been identified.
In addition, issues of special procedure were reported. This is the prosecution of persons hiding abroad.
“I reported on criminal cases that have already been transferred by the Investigative Committee to the prosecutor’s office for referral to court. Currently, lawyers appointed in criminal cases are getting acquainted with the materials of the case against Tikhanovskaya, Latushko and other members... I won’t even name this organisation... Who imagined themselves to be the leaders of our country. This case will also be forwarded shortly,” Dmitry Gora told.
With regard to economic crimes, Dmitry Gora emphasised, “The position was agreed with the Head of State on sending to court in special proceedings and criminal cases not of an extremist nature, but against people who committed economic crimes, causing enormous damage to both citizens and state organisations. And they have quite large assets left here that will make it possible to compensate for this damage. We will also work in this direction.”
Answering whether there are any alarming trends that are visible in the work of investigators, Dmitry Gora confirmed that there are such, “A year or two ago, we were concerned about the growth of cybercrimes, or crimes in the field of information and communication technologies. Now there is a huge increase in scams also using the Internet, the so-called traffic accident scams, when they call citizens, usually the elderly. They say that a relative got into an accident and urgently needs to transfer the money either to the investigator so that he somehow investigates this case correctly, or to the doctor so that he treats their relative appropriately. That is, people blindly believe and lose a lot of money. There is a huge rise in this area.”
The Investigative Committee is also concerned about the increase in the number of recorded crimes against sexual integrity and sexual freedom, especially those involving minors.
“Here we also note growth. We will analyse this situation. I think we have increased visibility. But all the same, all subjects of prevention will need to make efforts in order to rectify the situation in this area,” noted Dmitry Gora.
Based on the results of the report, instructions were given in the field of personnel work, improvement of work in all areas. It was instructed to focus efforts on completing the investigation of extremist criminal cases.
“We should not lose sight of those cases that, due to certain circumstances, we cannot complete at the present time. This applies more to crimes committed on the Internet. These are insults, threats and so on. It was instructed to accumulate a database, record all illegal acts, so that in the future it would be possible to bring the perpetrators of these crimes to criminal responsibility,” Dmitry Gora explained.

Based on materials of sb.by and belta.by
Lukashenko Investigative Committee security