The Head of State warmly congratulated the children on the holiday and spoke with them in detail about the future of the Belarusian pioneers.
“We have to seriously revise the work of the pioneer organisation and our youth organisation. The biggest drawback is that pioneers and the pioneer organisation have weak-tie relationships with the youth organisation, the BRSM Youth Union, while BRSM is not very interested in your work. We had an iron prescription in the past: Komsomol members were the elder brothers who led the way. In other words, a new generation of young people was raised from pioneers,” said Aleksandr Lukashenko.
The Head of State set a task for the government and the Belarus President Administration to develop proposals on how to improve the structure of the pioneer organisation and the BRSM Youth Union,

“We’d better complete this work by the end of the year. We should start with the youth, with the BRSM Youth Union. The BRSM grassroots organisations should be ubiquitous and cover all youth groups, including young people living in the countryside, students, young workers, and so on, like it was in the times of the Komsomol.”

According to the President, the pioneer movement might fail without the active participation of the BRSM Youth Union. The Head of State believes that this youth organisation should play a bigger role, just as big as it played during the Soviet times. Back then, the Komsomol committee was involved in many activities, including the payment of scholarships, the provision of a place in a dormitory, and the organisation of cultural events.
“We should move forward, and we should rebuild the structure, and most importantly, get rid of formalism. To be honest, there is plenty of formalism there. It should be sincere. There should not be any activities just for the sake of appearances, report to the public, show on TV or so on...” the President criticised.
Addressing the pioneers, Aleksandr Lukashenko added,

“The present is a very exciting time. It has chosen you first of all. The future of the country is in your hands, and you must preserve it. You will never feel better anywhere than at home.”

The Head of State recalled that following the presidential election in 2020 some of those who did not agree with the results of the vote, especially those who actively took part in the protests, decided to leave the country, “I am receiving information that many of them want to come back home but do not know how. First, they feel ashamed: they ran away, how can they return? Now, let them think for themselves how to do it.”
Aleksandr Lukashenko drew attention to the importance of this event for him. The President emphasised the great importance of the fact that pioneer traditions were preserved in Belarus. The other former Soviet countries have destroyed and replaced them by other public organisations.
The children asked the Head of State what qualities a leader should have and whether it is necessary to be born with special potential in order to become a leader. 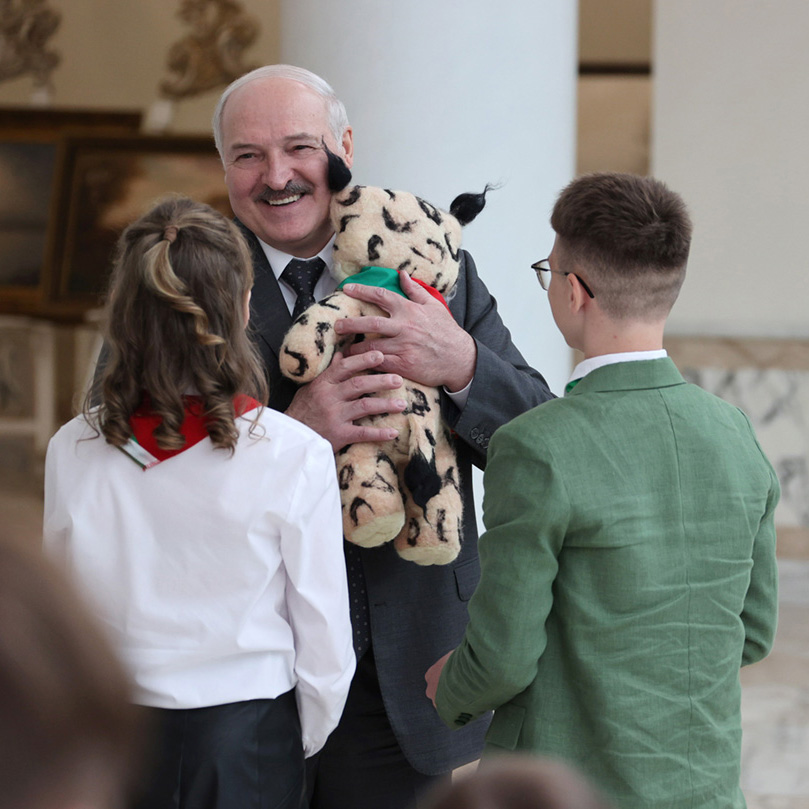 “To be a leader, you must prove your worth, establish your authority in the eyes of your peers. To be a leader is to be followed. If they don’t follow you, what kind of leader are you. Leadership should be earned by deeds. This is important,” answered the President. A person born with leadership potential should develop leadership skills throughout their entire life, the Head of State is convinced. In this regard, he recalled his well-known expression: ‘Presidents are not made, presidents are born.’
Aleksandr Lukashenko answered the question about what specialists are in demand in Belarus today,

“We need all kinds of skill sets. We do not have so many natural resources to live on: oil, gas, gold, metals, and so on. We buy them all. And we provide for ourselves thanks to people’s brains. Moreover, our brains are so to speak our main asset. Therefore, all professions are good. Yet, professions that give a boost to the nation’s development are important.”

The President noted that this is exactly why Belarus embarked on the active promotion of the IT industry. Belarusian specialists are working in the field of space technology and biotechnologies. “The most advanced, science-based professions are in bigger demand. In fact, it will help us to be at the forefront, ahead of others, and not trail behind. If we fall behind, these oil, gas and gold mining giants will simply overwhelm us. We will not even be visible. Therefore, we should be running ahead so that we will not be crushed. And these professions, the most advanced ones, will be in demand.” 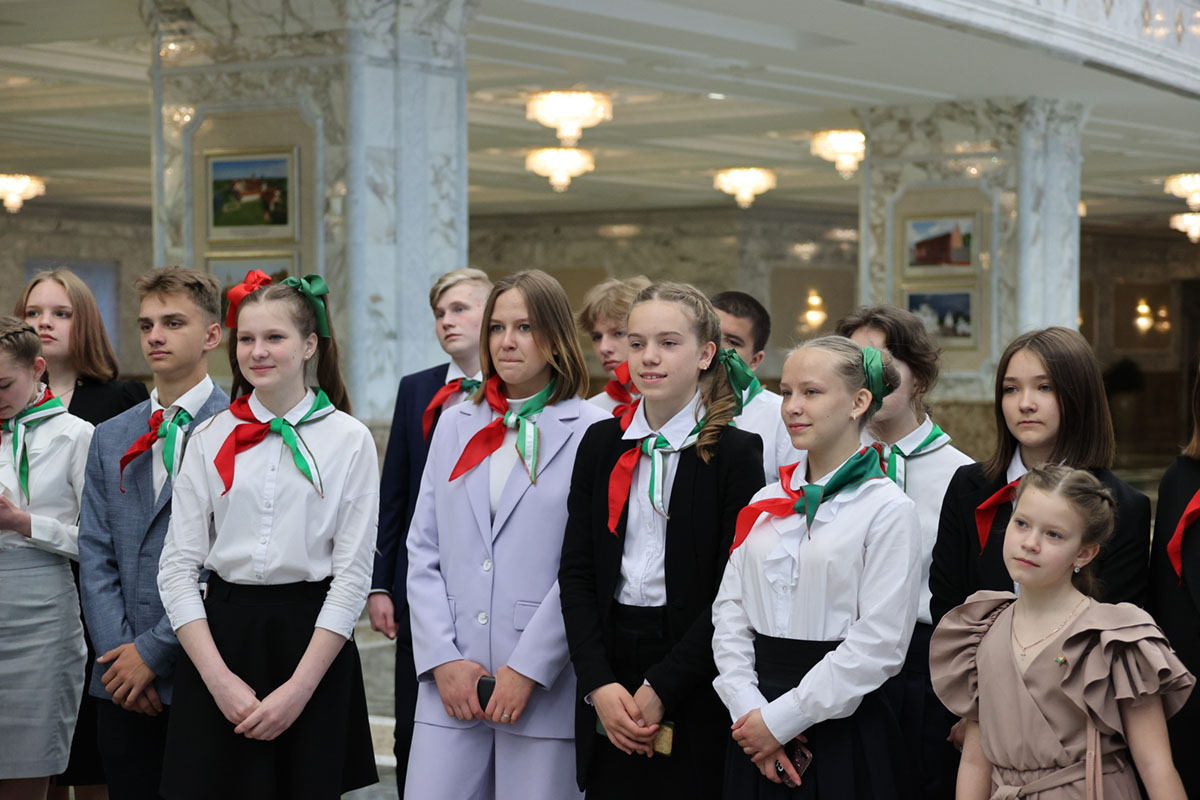 During the conversation, Aleksandr Lukashenko spoke about the role of smartphones in the life of modern youth. He noted that the smartphone should be used primarily for its main purpose — as a means of communication, and the Internet — to obtain the necessary information.
The President considers mobile communications, of course, a great achievement of mankind, but, in his opinion, it also has negative aspects. Nonetheless, young people need to spend less time on their phones so as not to turn into ‘little old men poking their phones all the time’. Aleksandr Lukashenko is convinced, “It should be sometimes put aside, and you should live real life — and to use it at your age and especially later only when necessary. A telephone is primarily a means of communication and the Internet access. The Internet should be used to get the required information, but not to hang out online all time.”
At the same time, the Head of State added that he personally does not use a mobile phone for a number of reasons, including security issues.
Aleksandr Lukashenko has approved of the idea of arranging a memory lesson and has agreed to stand in as a teacher. He suggested timing the lesson to, for instance, September 1st and holding it in the Palace of Independence. Arranging the event in the Great Patriotic War museum was also proposed.
On the whole, Aleksandr Lukashenko approved of the endeavours of pioneers and young Belarusians, which are meant to preserve historical memory, including the nation’s heroic deed and deeds of individual heroes during the Great Patriotic War. After all, there is no place without scars of war on the territory of Belarus. Answering the children’s question about relations between Belarus and China, the Head of State noted,

“An ancient and strong civilisation. Nobody doubts now that future belongs to China.”

These relations were built over a long period of time. Aleksandr Lukashenko visited China back when he was a member of the parliament.
“I got familiar with China when they started developing. I came to Minsk and said in the parliament that future belongs to this country, let’s learn how to take care of the past and look into the future. Look, it’s been 30 years. It turns out I was right,” told the President.
Aleksandr Lukashenko stressed that China is becoming a world leader and clashes with the USA in this regard already, “Americans don’t want as a strong world centre as they are. Because Americans exploit this leadership. They have a currency — the U.S. dollar. The economy is strong because they are strong. And here comes China with its own currency — yuan — and with its desire to be a leader.”
The Head of State noted that the Chinese are very dedicated to their country and love it.
Speaking about Belarus-China relations, the President remarked that they had managed to build kind, close, and humane relations not only in economy, diplomacy, and politics but also at the level of the leadership of the countries.
“Trust is the key,” he stressed.
Aleksandr Lukashenko told the pioneers about his motto at the meeting. The Head of State said ‘Only forward!’ and explained his choice of the motto,

“Remember, guys, you can never stop. Life is very fast, frenzied, and exuberant. I say it to adults, too. If you stop, the large crowd behind you will stomp all over you… Or you will simply drop behind. Little by little every day but only forward!”

Pioneer activists of the Belarusian Republican Pioneer Organisation presented the Head of State with their talisman — the little lynx Vognik [Spark in Belarusian]. It symbolises active and creative, responsible and hardworking, polite and modest, honest and cheerful pioneers of Belarus.
“We’ll find a place for him at the Palace of Independence,” Aleksandr Lukashenko promised.
The pioneers took a commemorative photo with the Head of State. A tour of the Palace of Independence was another great event for them.