In Tugolitsa, founded in 1924, there was never a church and locals went to Bobruisk to pray, baptise their children and get married. In 2005, they turned to the Bobruisk diocese with a request to organise a parish in their village. It was decided to arrange it in a building from the 1960s, where at one time there was a kindergarten and a post office, which had been empty for a long time and had fallen into disrepair. It took several years to agree on all the issues and repairs. In 2017, Rector Father Fiodor held the first service in the new church in honour of St. Sergius of Radonezh. 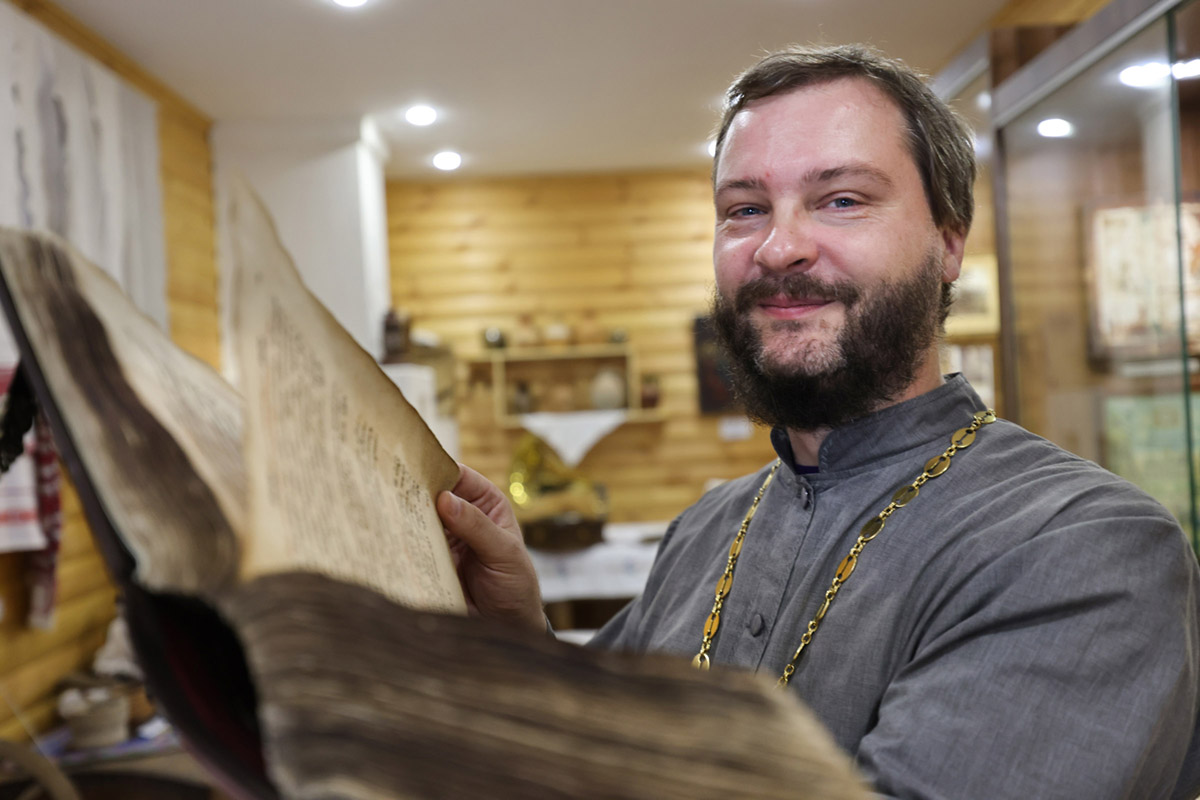 Although Fiodor Kashenok was born in Kaliningrad, in the family of a sailor, he considers Belarus to be his homeland. The ten-year-old boy was brought here by his mother, a native of Chausy. Once Fiodor discovered the 1840 prayer book in the closet of his grandmother: shabby, with no cover. Then he became interested in engravings and at the age of 14 he decided to learn the Church Slavonic language. 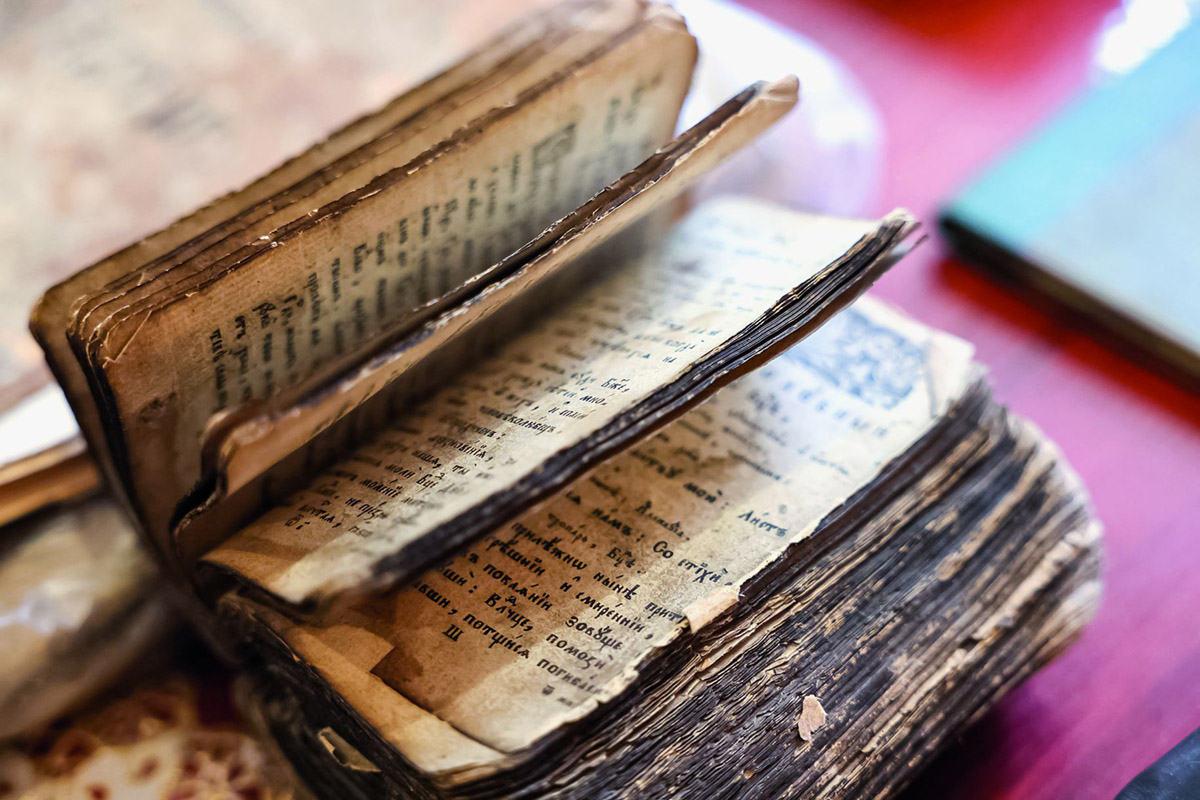 “In a bookstore I saw a textbook, according to which in 1904-1915 they taught rural children reading and writing. I mastered the alphabet and writing and wrote in a notebook with ink and a quill pen, which could be easily found in the private sector.”
Nevertheless, after school, Kashenok chose a completely earthly specialty: a cameraman. After graduating from the specialised school of culture, he worked for a year in a club, located in the village of Antonovka, Chausy District, and at the same time he taught fine arts at a local school. But over time, he realised that the worldly life was not for him and submitted an application to the Minsk Theological Seminary.
“The competition was big: 150 applications while the recruitment was 40 people... I didn’t get it the first time, I had to go to the preparatory department.”

Fiodor restored the first old book even before he became a seminary student. The Spiritual Poetry of 1910 was given to him by his grandmother’s sister, Valentina Bolozhko — Darya — who lived in the village of Romanovichi, Mogilev District.
“The book was in a deplorable state. I looked for a special paper similar to the original, cut it into ‘ribbons’, glued the pieces of paper to it. I did it in a week. I knew little about restoration, but the process carried me away. Moreover, I also inherited the Psalter of 1880 and the December Menaia of 1788 from my other grandmother — Anastasia Dushko (Olshevskaya).” 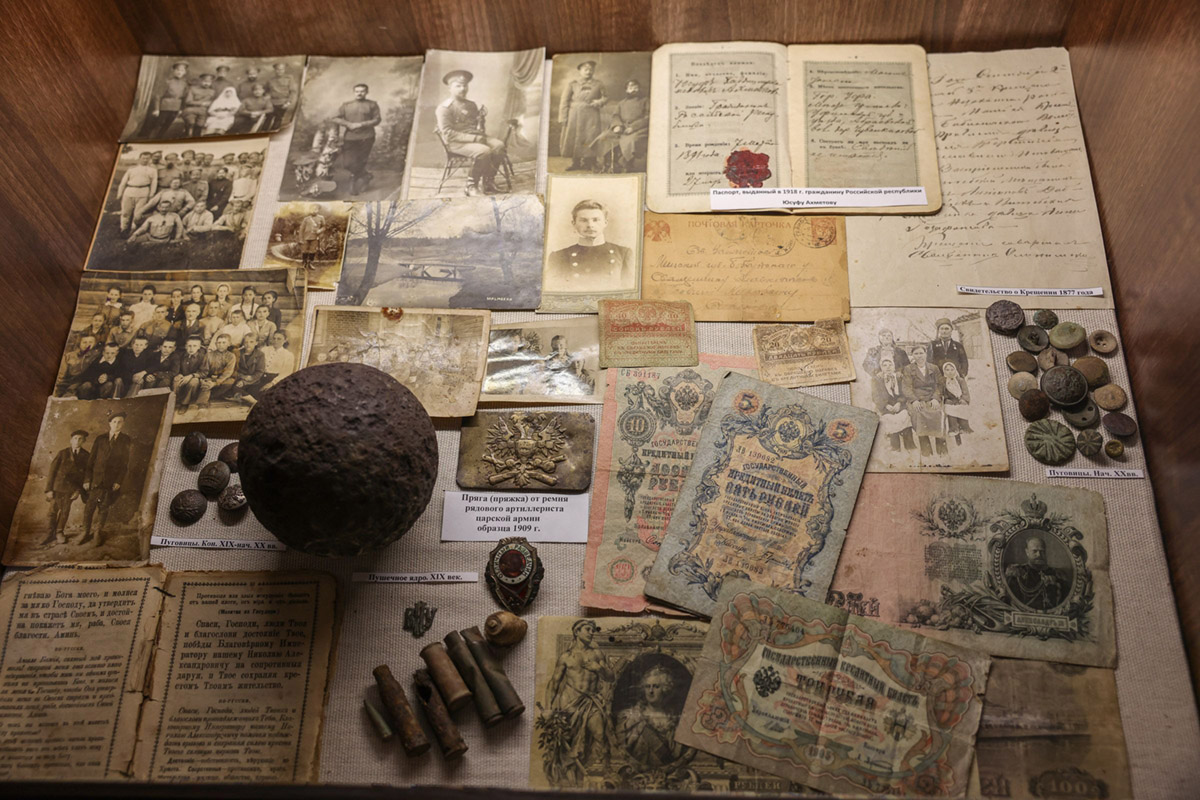 …In a small room on the table there are brushes, matte tracing paper, newsprint (paper for restoration is even brought to Father Fiodor from Germany), twine, linen threads and a special binding machine.
“We scrape off the wax from the rarities, soak the pages in a solution of washing powder for 30 minutes, glue the damaged areas with a carbon copy, and sew them together again,” explains Father Fiodor. “The cover of the Menaia was wooden, covered with blue satin. But I had to replace it with a leather one. The embossing was done by Grodno masters, the cover itself — by Bobruisk masters, from a tannery. We ‘disassembled’ the book, restored it and bound it again. Folios from the 18th century were made not of newsprint, but of fabric. You cannot cut it off, therefore you need to work extremely carefully so that the edges are even.”
Father Fiodor has already restored about 500 ancient books — handwritten and Church Slavonic texts from the 17th-19th centuries. The restoration of one takes from a month to three years!
Together with him, the parishioner Ksenia Berezovskaya, who specially moved to Tugolitsa from Grodno, mastered the art of restoration and binding. She is a restorer, a psalm-reader and a cook (there is a kitchenette at the church, where they prepare meals for Sunday school pupils and pilgrims).

Plunging into the past

Father Fiodor has not only been reviving old books for 25 years now. He has created a unique museum, which contains about 300 exhibits, at the church. Ancient icons (he gives them to Aleksei Lipsky of Minsk for restoration), objects of peasant life, antique furniture, pre-revolutionary photos, coins, church utensils... 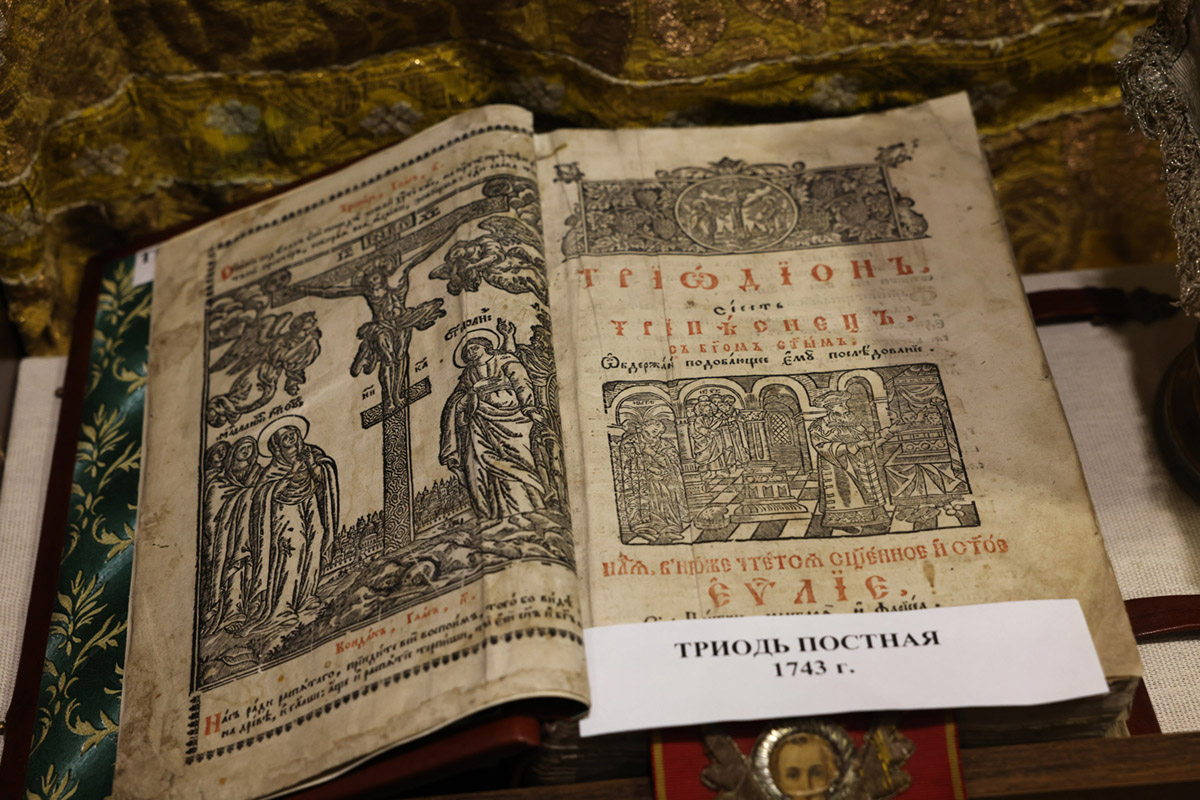 Things get to the museum in different ways. Local villagers donated a spinning wheel, a fragment of a loom from the middle of the 20th century, their great-grandmother’s towels and pottery. Father Fiodor brought Kuznetsovsky porcelain from Nizhny Novgorod, as well as the pictures showing the dressing room during WWI. The icons of the 18th-19th centuries were donated by priest Pavel Lukin while Raisa Putilina of Bobruisk donated the icon from the 1880s ‘The Entry of the Lord into Jerusalem’. Meanwhile, the vestments of the priest, brocade of the late 19th century were presented by Archimandrite Kirill Badich from Khotimsk. This garment, embroidered with golden threads, is very heavy, and it is not easy to serve in it.
A corner of peasant life adjoins a noble one, which displays photographs of the Shchigelsky family (1914-1935), merchants Ageiko and Kerkevichs. Moreover, there is also a chic neo-Renaissance oak sideboard from the early 20th century with handles in the shape of a lion’s head. It was donated by a parishioner from Brest, the delivery was paid for by the Bobruisk’s enterprise Krasny Pishchevik (the rarity costs about 5,000 Euros). Next to it there is a German piano, a 19th century wall clock that regularly counts time, a kufar chest — pasted over from the inside with pictures from an old fashion magazine — handed down by the descendants of the peasant poet, Pavlyuk Bagrim.
There are pre-revolutionary photographs of priest, Stefan Semenov, from Glusk (his son Aleksandr was a famous doctor) in the exhibition. The grandson knew very little about his grandfather. Father Fiodor filled this gap by working with the documents of the National Archives of Belarus. Relatives of the executed priests often turn to him, passing old photos of loved ones and asking to trace their fate. And he helps.
Father Fiodor’s special pride is vinyl records. He received them from a resident of Tambov. One of them bears the voice of Tsar Nicholas II. It is turned on once a year, on special occasions. An exception was made for us, they brought in an antique gramophone with a bell and a handle. The feelings are inexpressible, as if you’re plunging into the past...

When the time came, they sacrificed silver

At the request of the villagers, Father Fiodor also restored a wooden chapel in the village of Voronovichi, which had been burned down in the 1970s. 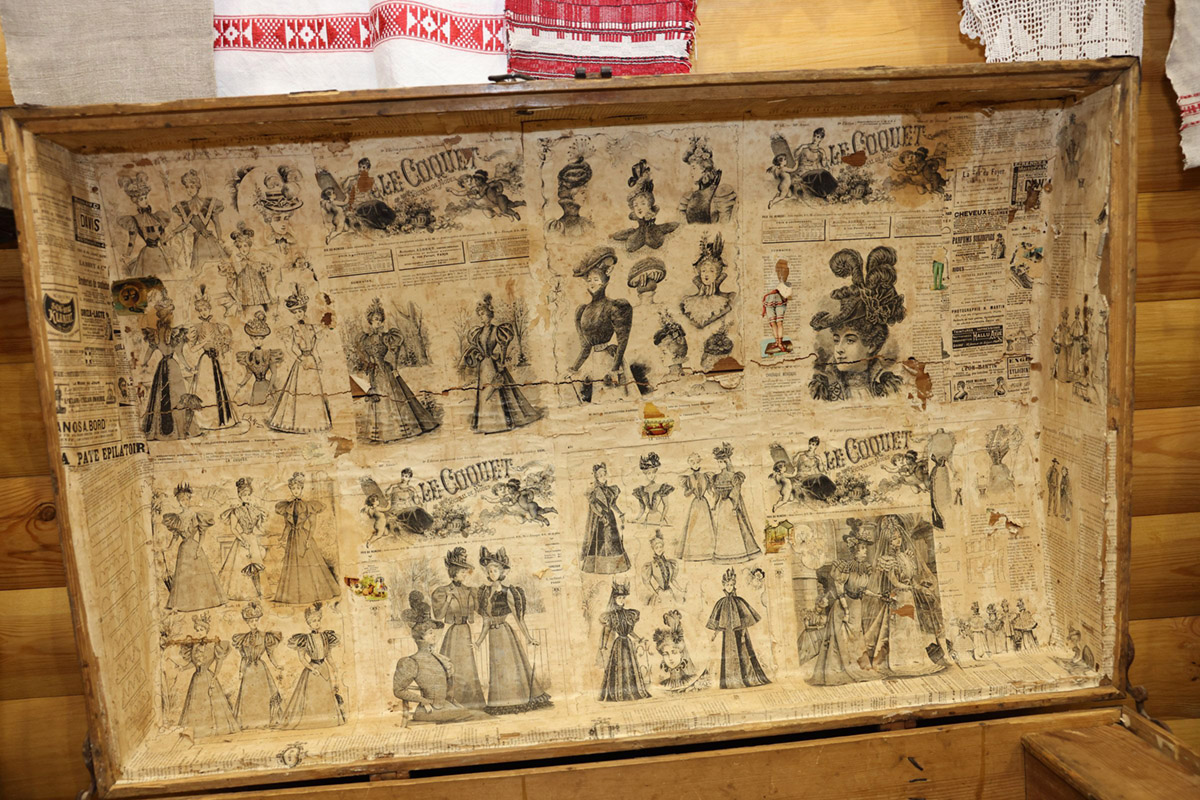 “To put it in its former place, the locals cut down the bushes, took out 15 trailers of garbage and collected money for construction. They decided that everyone will pay for their own personalised log. The money was collected quickly, in two weeks they made a blockhouse. A capsule with the names of the donors was laid at the entrance. However, there was not enough for the roof, therefore, we went to Minsk, to the St. Elisabeth Convent.
Having listened to the service, we went to the porch with a donation box, into which the parishioners threw money. When we returned home and calculated what we had collected, we were amazed. The amount was exactly what was needed for the roof of the chapel!”
When the time came to buy church utensils, Father Fiodor asked the parishioners to donate silver items that could be melted down, and people carried torn chains, rings, earrings... Of these, a master from Minsk cast a liar with a cross for communion and a star — one of the sacred vessels used in the liturgy.
Today Father Fiodor conducts services in Tugolitsa and Voronovichi. He is glad that people are drawn to faith and are interested in history. On Sundays, tourists from the capital and a professional guide from Mogilev come to the museum at the church. Pilgrims to Tugolitsa travel from all over Belarus, as well as from Kazan, St. Petersburg, Moscow, Georgia and Greece.