The long autumn-winter evenings are no reason to fall into ‘tourist hibernation’. Instead, it’s time to get acquainted with the traditional culture and way of life of Belarusians. In ethnographic museums and farmsteads, the season of soulful ‘Vyachorki’ (evening rural parties) is in full swing with songs, dances and, of course, incredibly tasty potato pancakes. 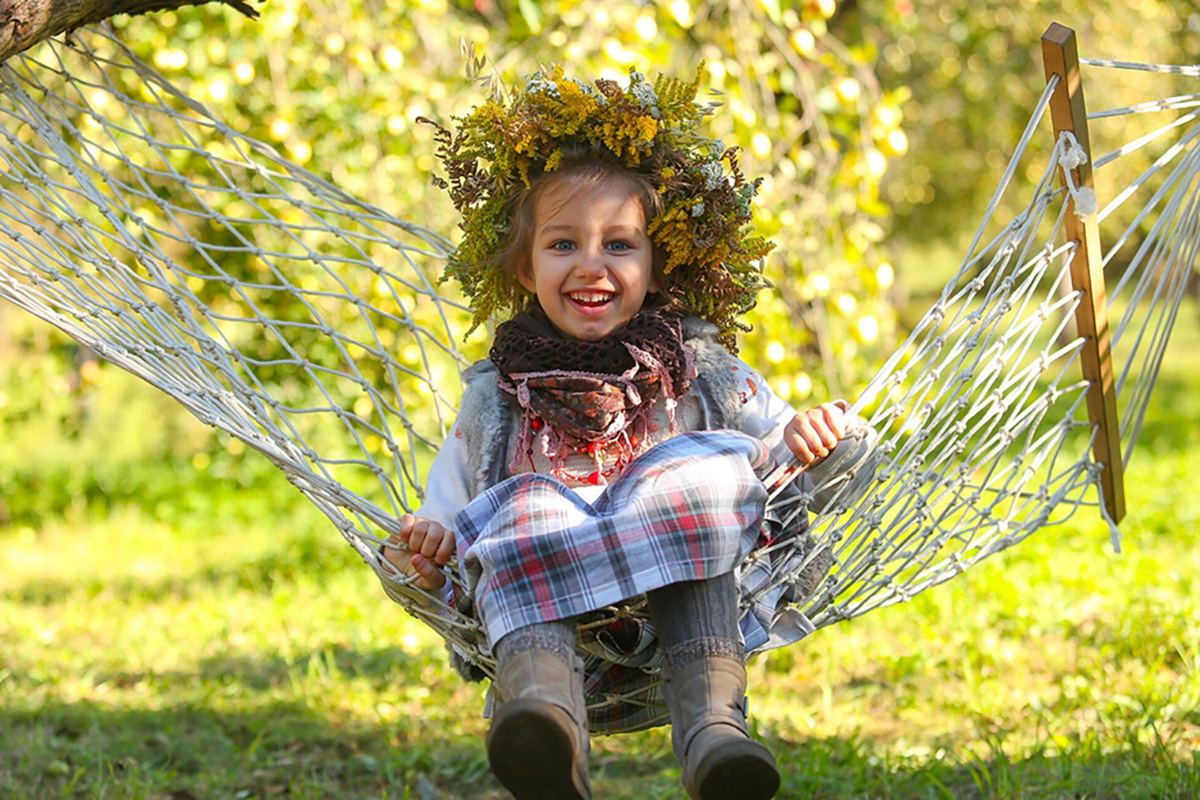 
Moving to the past

Just a couple of kilometres from noisy Minsk, there is a Belarusian skansen — a Museum of Folk Architecture and Rural Lifestyle. Dozens of estates and outbuildings, churches and shops, mills and barns, which were erected in the 19th century, are collected in the village of Ozertso. You can wander around the site looking into houses with narrow windows all day long. Each hut has its own atmosphere and an exhibition of peasant belongings: from chests and household utensils to bast shoes and children’s toys. The museum collections boast tens of thousands of original items that once belonged to our ancestors. If you like something, you can immediately sign up for a creative master class during which they can teach you how to forge, weave belts and weave ritual dolls. 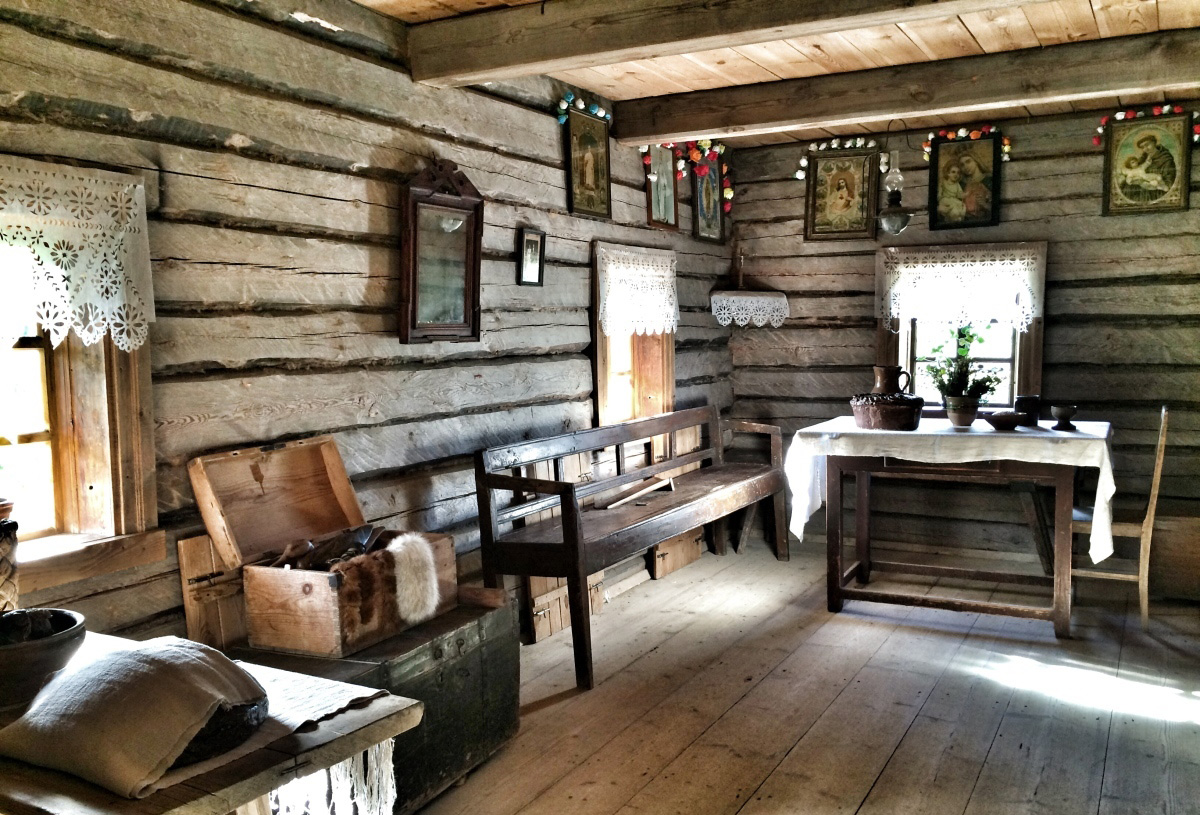 In the Museum of Folk Architecture and
Rural Lifestyle
PHOTO:WWW.TRAVELING.BY

If you’re lucky, you can get to the folk holiday. Our ancestors enjoyed these celebrations: they invoked the spring with rituals, in summer they had a good time during Kupala Night (a traditional pagan holiday celebrated in eastern Slavic cultures), and in autumn they celebrated Zhiten (a national holiday of grain-growers), organised fairs on the Protection of the Most Holy Theotokos holiday while also dancing on Kolyadki and Shchedrets (Belarusian Christmas traditions). An important note: there is even an authentic tavern at the museum, serving machanka (a very traditional Belarusian dish of meat stewed in broth), vereshchaka (a traditional Belarusian sausage and meat dish, a sort of dressing for pancakes) and kolduny (stuffed dumplings made of unleavened dough in Belarusian cuisine).

Do you think hand weaving has sunk into oblivion with the advent of factories? Look for flax and get your rippling combs! The branch of the Vetka Museum of Old Believers and Belarusian Traditions named after Shklyarov ‘collects’ marriageable brides. No jokes and pranksters — only perfect mastery, which will be given to everyone free of charge. Now they are learning how to deal with a tow, and by spring they will start using spinning machines.
To make things go faster, an accordion player is invited, so any work ends with songs and dances until you drop: ‘Oh, the music plays on and on!’


Catching Tereshka by the tail 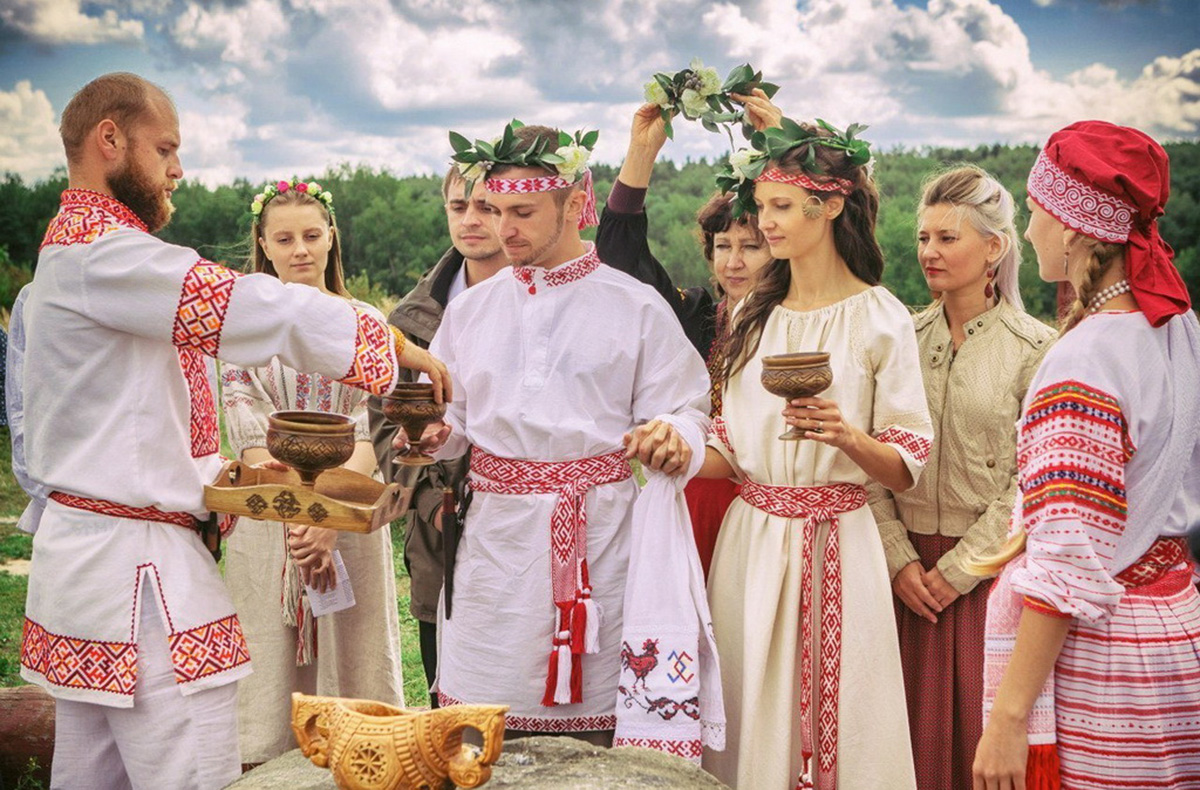 Lepel District in the Vitebsk Region is the land of blue lakes and mythical creatures. One of the most beloved legendary monsters is Tereshka. Who is he and where did he come from? No one will ever remember. But for local residents the phrase ‘Shouldn’t we marry Tereshka?’ is a prearranged signal for the beginning of traditional fun, which is held here in winter. Dancing to the village orchestra, young boys and girls meet and get married for one evening. Adults — so that young people do not get embarrassed — serve drinks in a shot glass, crispy fat and arrange all kinds of funny contests and games, with jokes in the local dialect. Surprisingly, often these ‘fake’ couples continue their acquaintance afterwards and get married in real life. 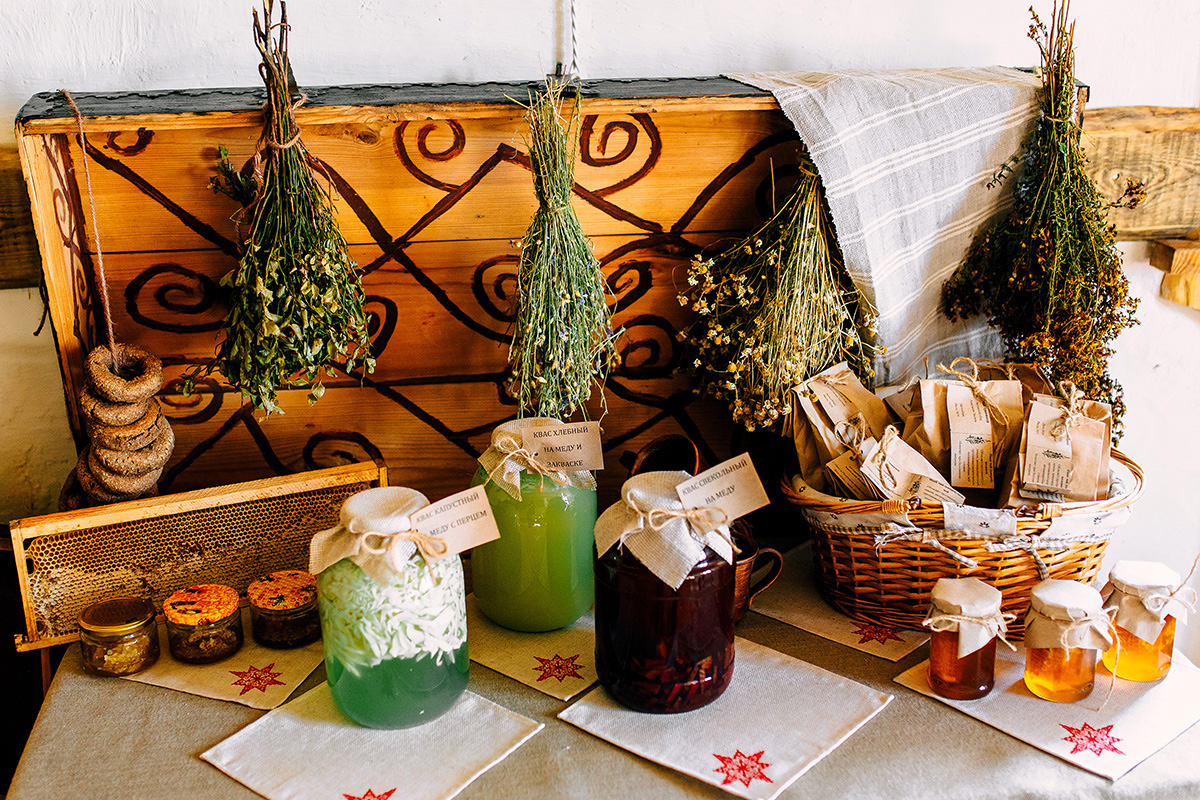 Exciting aromas of herbs, teas and honey
Open source photo
Seeking a quiet rest, you should go to Polesie. A young Muscovite Anastasia Teslyuk fled to the village of Khvoensk several years ago. She says that you don’t need the Internet or TV to be happy. It’s better to have a stove, a bathhouse and wild herbs! The girl, like a forest fairy in the Belarusian way, bakes bread from her own grain, does needlework, collects gifts of the forest and life stories of local old-timers. The fame of Anastasia has long gone all over the country and Minsk’s IT specialists and families with children go to retreats in the wilderness with great pleasure. This is understandable as they are offered an unusual hunt ... for herbs. Even the names of the routes sound tempting: badger holes, wolf trails. And in winter you can experience an indescribable delight from fragrant teas (which are jokingly called wild potions here!) and sleep on pillows filled with hay. Khvoensk ‘Vyachorki’ in the cold season are distinguished by a special soulfulness, with local grannies gathering around a large stove, knitting, embroidering, singing and remembering their youth.


Having fun at the wedding 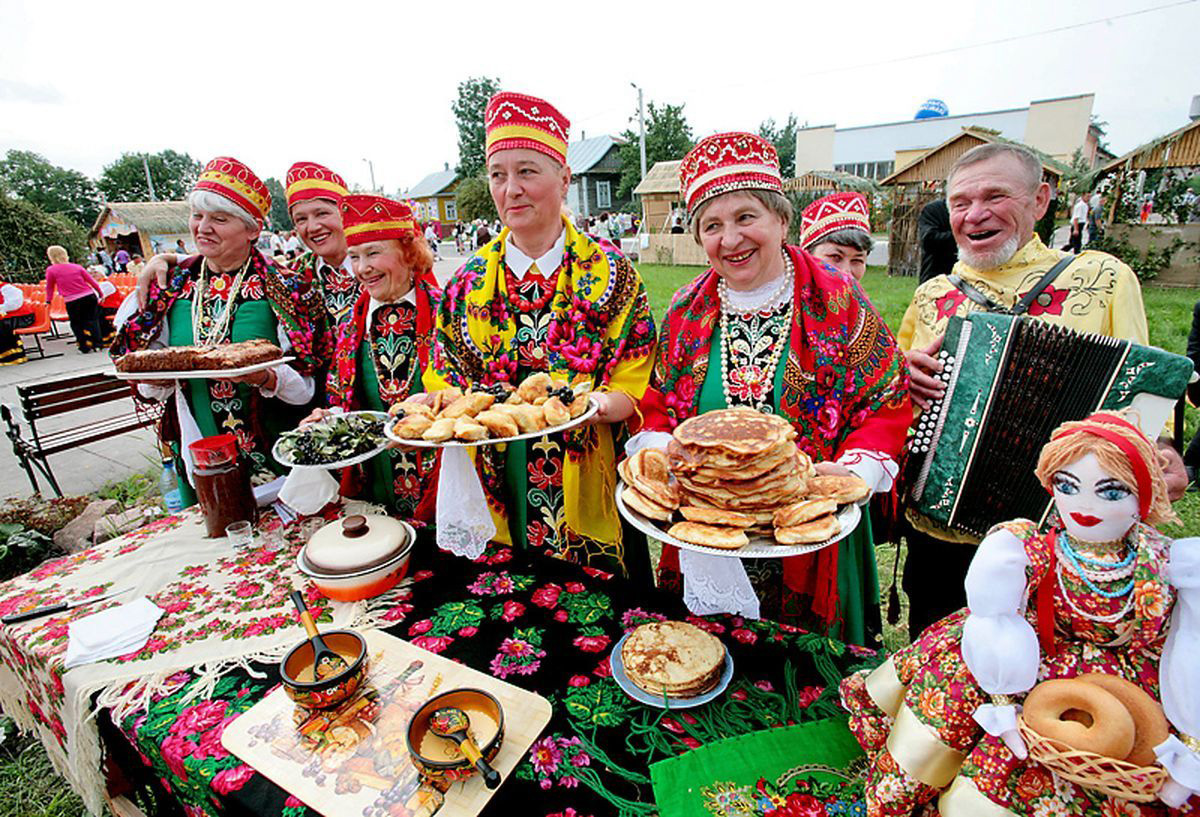 Motol delicacies are the most famous in Belarus
Photo: www.labur.by
The best ethnic parties are undeniably rural weddings in the provinces. What if there are no relatives and friends there, but you want to attend a rural wedding? You should go to Motol. In the Folk Arts Museum, wedding ceremonies are arranged especially for tourists. True, in the centre of the event are not young people, but ... a loaf! According to a special tradition, the local hostesses bake a lush bun over the whole day. They sing, dance, pray and read special secret words around the dough. Here, they will not wash their hands even without special ritual actions, let alone approach the stove.
The Motol wedding loaf does not look ordinary. It is decorated with ‘cones’ — pear twigs with bouquets of green barley and handmade paper flowers. Moreover, you should also taste the local sausage — the most famous in Belarus.