There’s nothing quite like a festive market to bring out the Christmas spirit in people, so it is time to stroll through the elegant squares 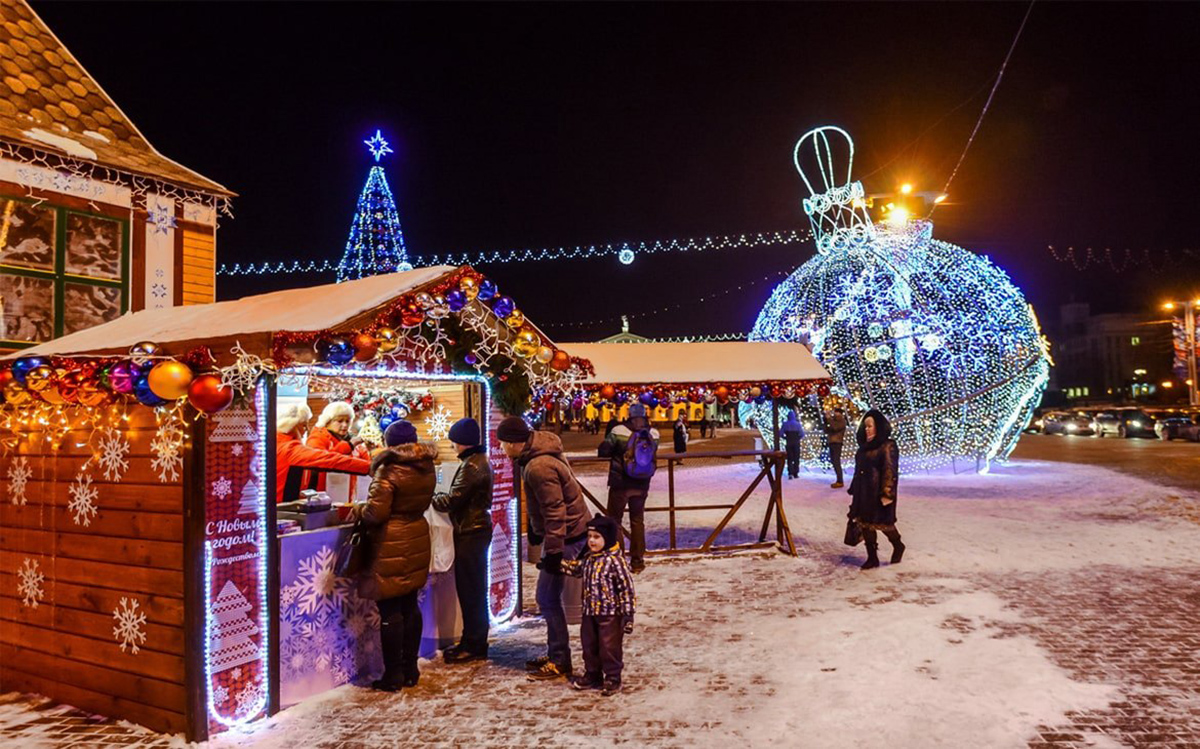 
Getting lost in the looking glass

You can’t go past the main Christmas tree of Belarus which is more than thirty metres high and has four thousand red, silver and golden balls, alongside a kilometre of garlands and a high-tech pixel veil — a nano-tree in all its glory! 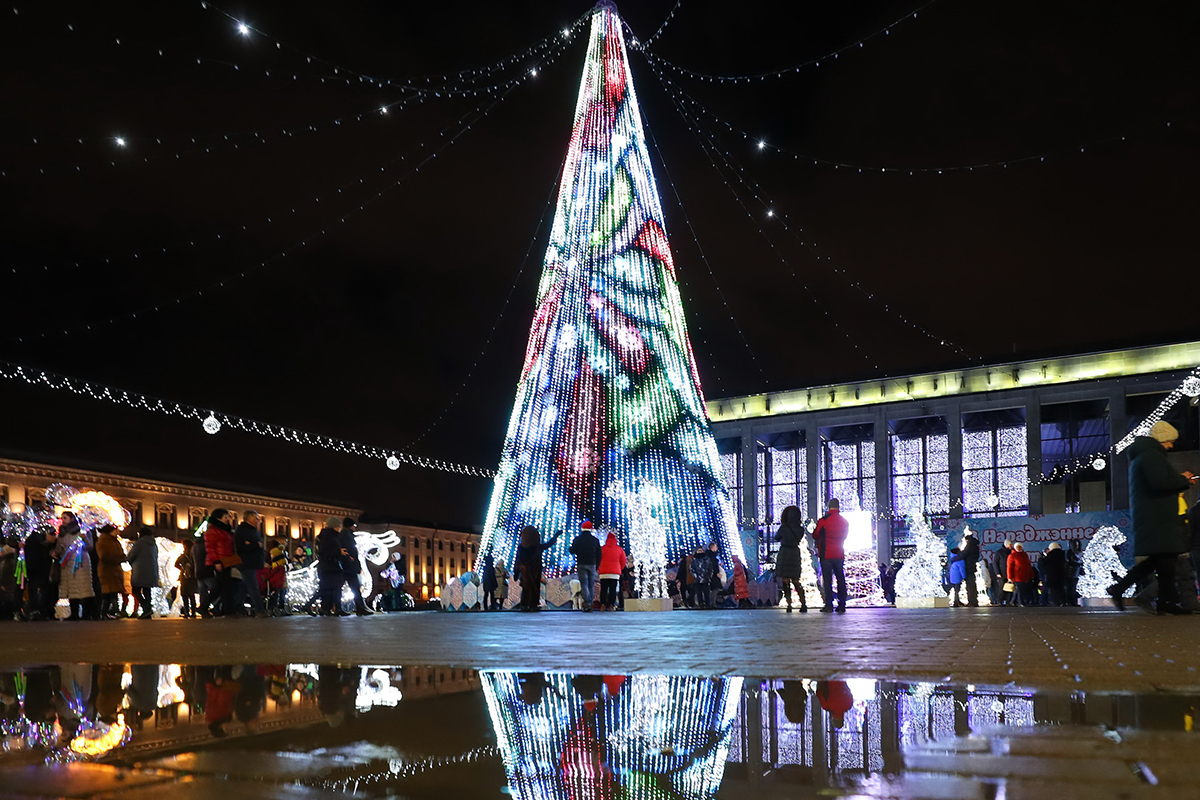 
You can get to it through numerous light installations: fairy tale characters, tunnels and huge balls. The lights are already switched on while the traditional Kalyadny Kirmash has started working around the green beauty. Unusual glass pavilions offer fragrant mulled wine, medovukha (Slavic honey-based alcoholic beverage very similar to mead) and herbal teas, as well as pancakes, potato pancakes, hotdogs and cakes from Minsk bakeries. Everything costs a penny and the taste is delicious.
In addition, two years ago, the holiday winter fair on Oktyabrskaya Square was recognised as one of the best in the CIS.
When: until January 15th
Where: Minsk, Oktyabrskaya Square


Choosing an outfit for a green beauty 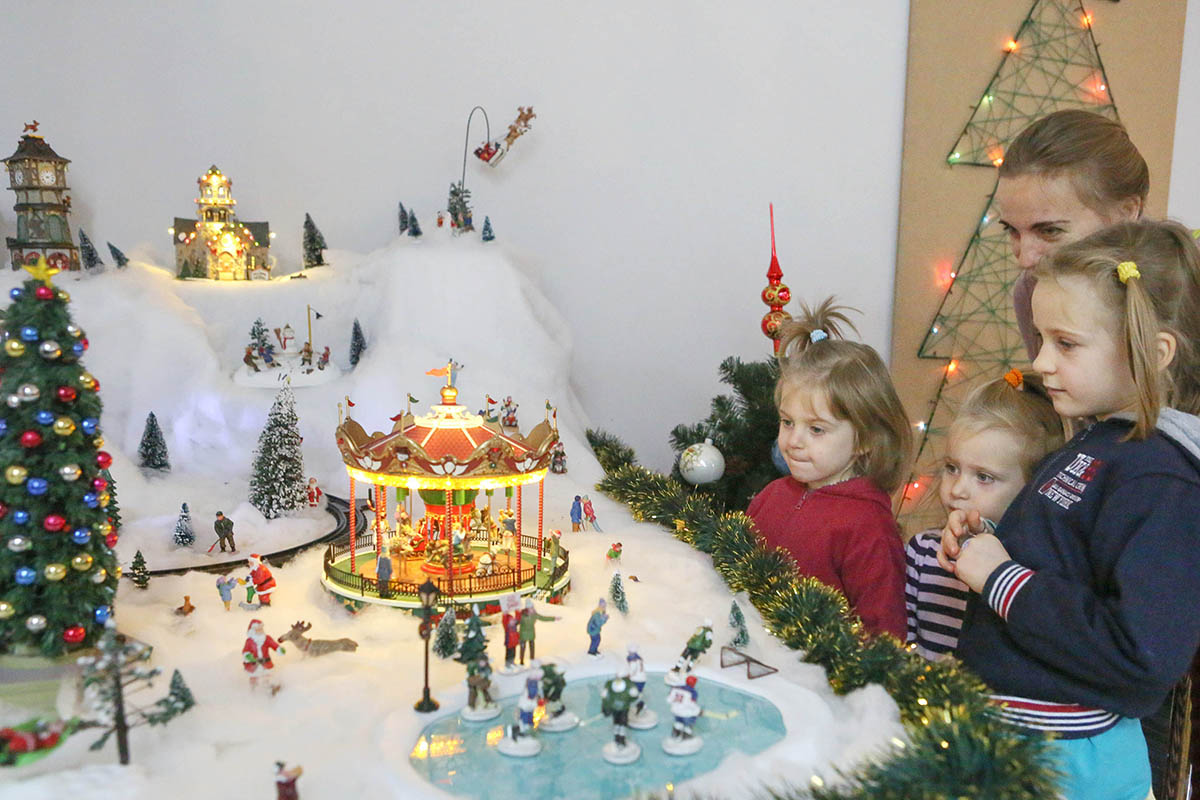 PHOTO BY BELTA
If you don’t feel like freezing at street fairs, then you are welcome to the winter fairy tale of the National Historical Museum. Every year the museum organises an exhibition and sale of unique Christmas tree decorations from 75 countries of the world. Characters made of glass, cotton wool, pressed paper, rare balls and icicles with a story, gingerbread and houses — children plunge into magic while adults recollect their childhood. The collection includes toys from Congo, Peru, Indonesia, New Zealand and even North Korea.
From mid-December, the museum launched master classes on making and painting Christmas tree decorations while the laziest are offered the chance to buy ready-made copies from Belarusian producers.
When: until January 23rd
Where: Minsk, 12 Karl Marx Str.

Starting a round dance 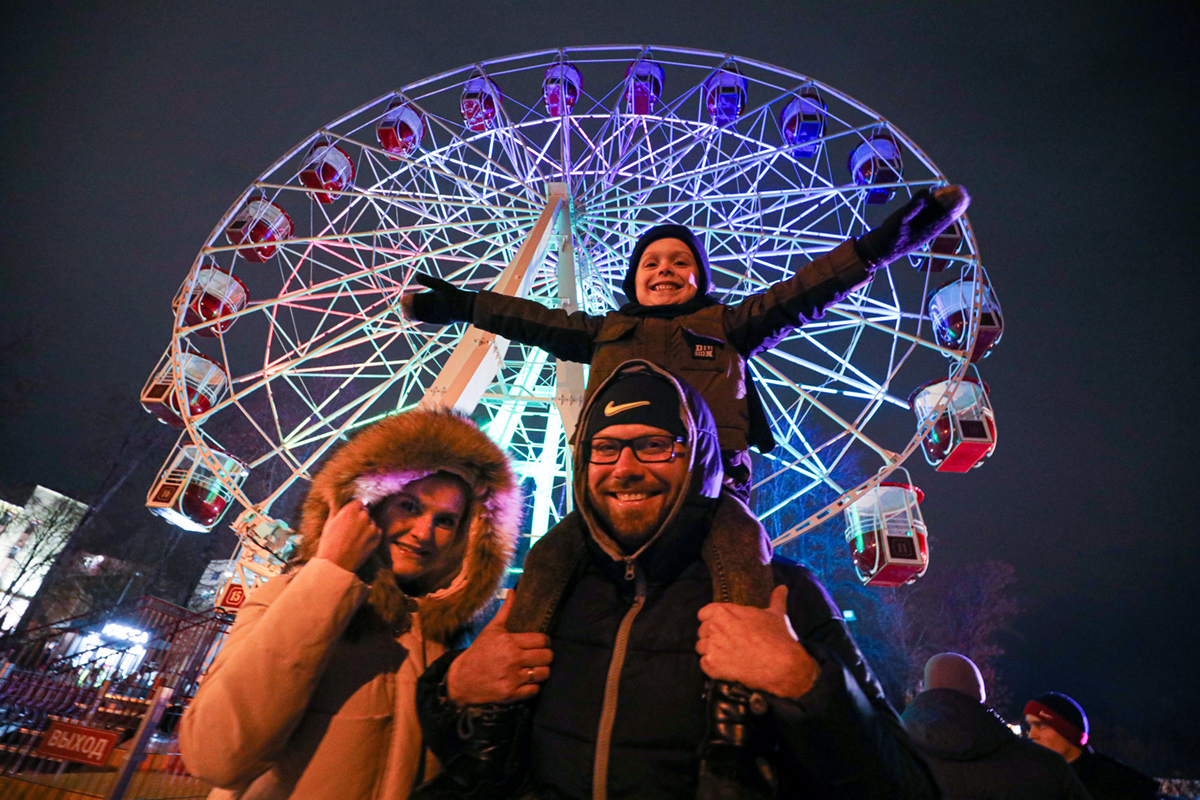 Photo by Anton Stepanishchev
This year, a holiday in ethnic style is held on the banks of the Mukhavets River with old fun, round dances and horses with bells. The first festival-fair Beresteiskiye Sani offers a rich three-day programme. It will be possible to stock up on wooden, clay and forged souvenirs from hereditary masters from all over the Brest Region while also tasting national dishes from the oven in the cold. Moreover, they promise to organise official swims in the winter river for the most daring. For this purpose, a field bath is equipped near the Tashkent restaurant.
Nadezhda Babkina and her Russkaya Pesnya ensemble will be the headliner at the event.
“I wish everyone to be well prepared for the holiday and be sure to take care of their health. After all, the festivities should be joyful, rather than a burden,” said the People’s Artiste in her recorded video message to the Brest residents.
When: January 7th-9th
Where: Brest, F. Skaryna embankment

The central square of the westernmost city of Belarus creates the atmosphere of traditional European Christmas markets, with majestic churches, dolls’ houses with balconies and millions of festive lights on Christmas trees: this is the Winter Fest in Grodno. 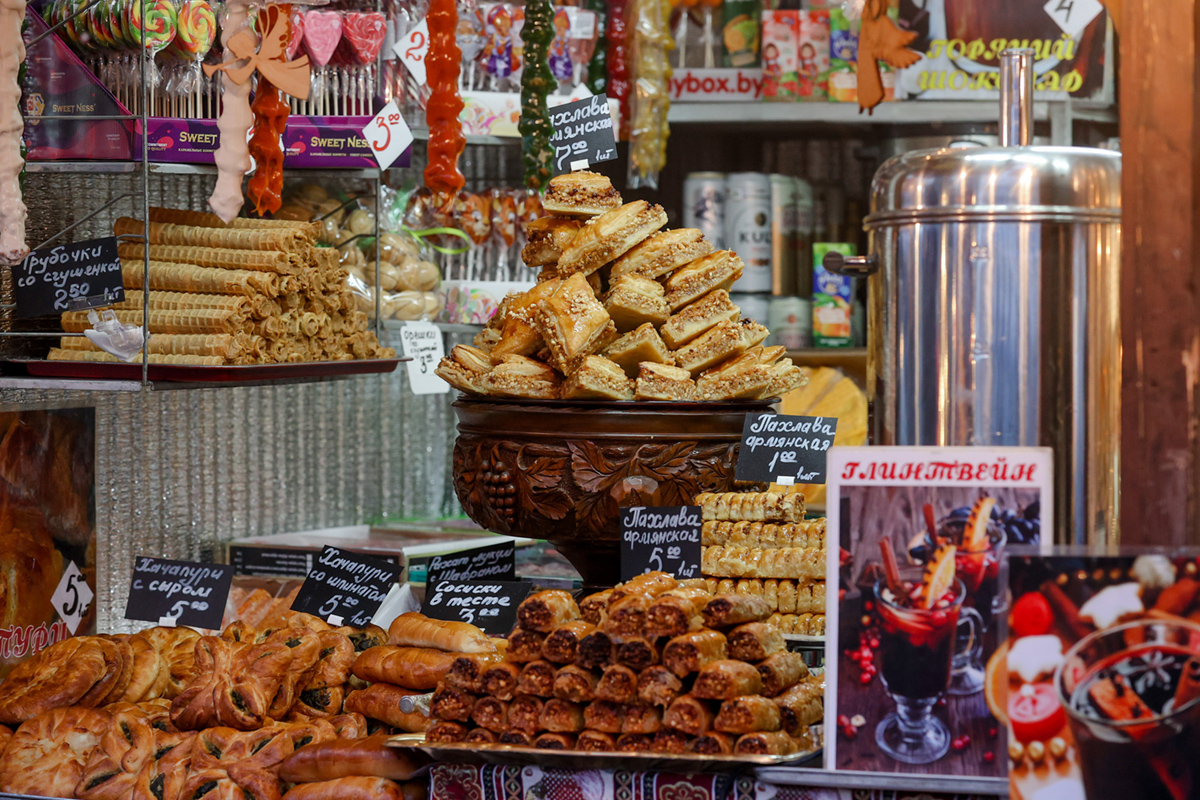 
Prepare your smartphones for memorable photos. The main feature of this fair is the cuisine of the peoples of the world. Azerbaijani Qutab (dish made from thinly rolled dough that is cooked briefly on a convex griddle), Georgian barbecue, Czech trdelník (a sweet, fire cooked, cylindrical cake), German Berliner (doughnut) and, of course, all kinds of Belarusian potato dishes. Entertainment for adults is a bar serving warm cocktails, including grog this year. They also took care of entertainment for the children and installed a Christmas carousel.
When: until January 9th
Where: Grodno, Sovetskaya Square 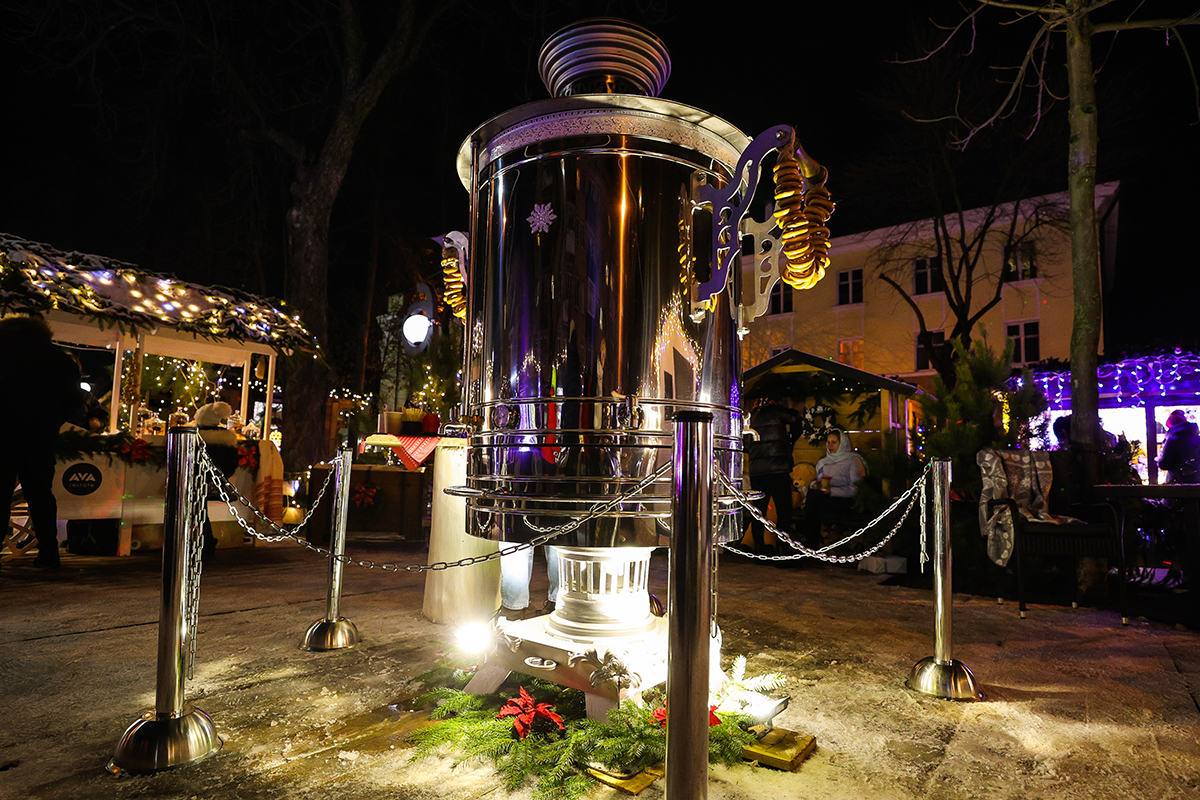 PHOTO BY BELTA
“How beautifully the moon shines! It would be difficult to describe the charm one feels in sauntering along on such a night among the crowds of maidens who laugh and sing, and of lads who are ready to adopt every trick and invention suggested by the smiling night,” Nikolai Gogol wrote in the immortal story The Night Before Christmas. They tried to recreate the festive atmosphere in Brest along the street, named in honour of the writer. Next to the sculptures of characters from his works people are already crowding in lines for treats: gingerbreads, soft rolls and new langosta (with cheese and without, served with sauce). From early morning to late evening a four-hundred-litre pot-bellied samovar is working here. They say that it can prepare tea for 1,500 people at once.
When: until January 15th
Where: Brest, Gogol Str.