A reception hosted by the President on the Old New Year is a sincere tradition in our country. On the evening of January 14th, athletes and journalists, civil servants, public figures and scientists, analysts and experts gathered for a holiday with the participation of the Head of State. Like-minded people were invited, representatives of various fields of activity, those who fearlessly defended the honour of the country last year. Many of them received medals, orders and thanks from the hands of the President. 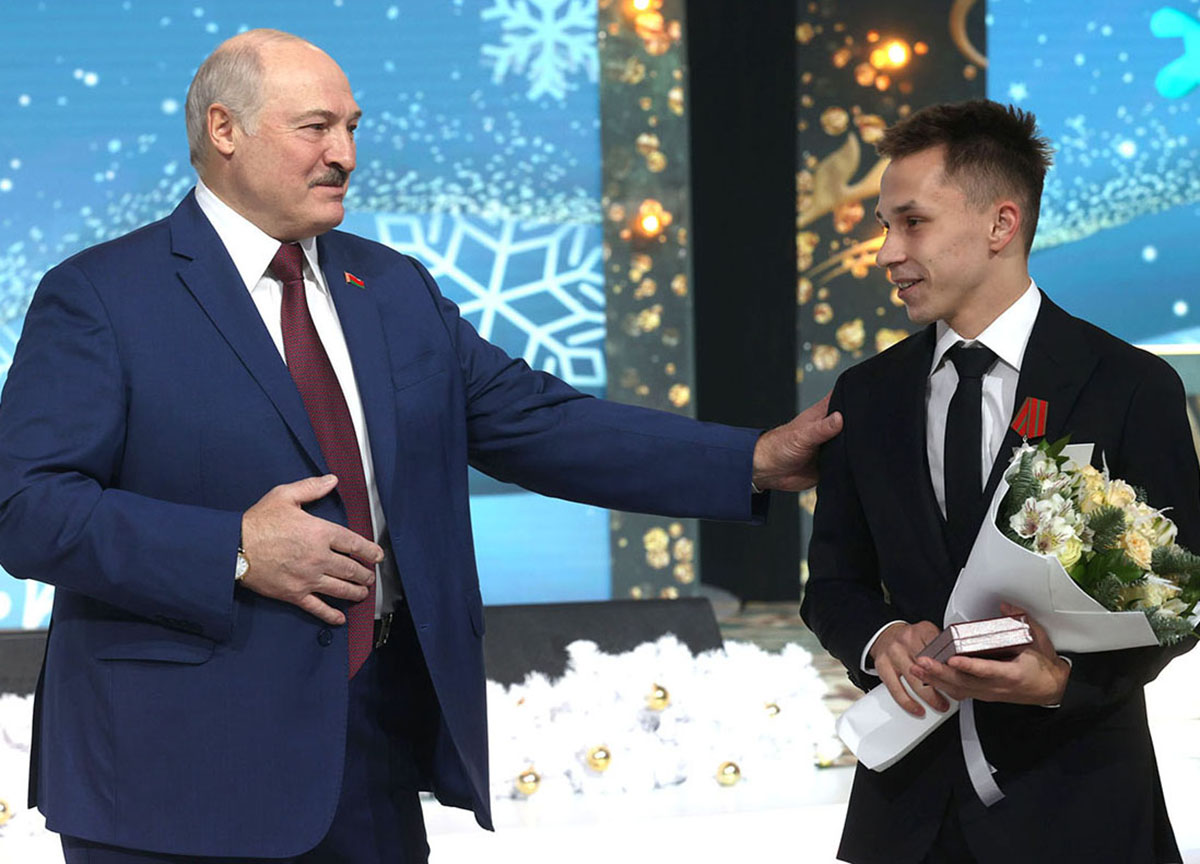 “Our Belarus occupies a small place on the map, but it attracts huge geopolitical interest. So it has always been in the history of our land, so it is happening now. Yes, we are different today, the world is different, but the plot of political intrigues around us is the same. It repeats over and over. We have already done a lot to ensure that the chronicle of Belarusian statehood continues. And we will do even more, because we are united in our goals.”

Aleksandr Lukashenko began his speech with a reminder that the first days of the new year immediately dragged Belarus into a whirlpool of extremely negative foreign policy events, “The events that shocked and forced Belarusians to mentally return to that unfortunate 2020, once again analyse and evaluate what we could lose, what national tragedy we prevented. Throughout the years of independence, Belarusians have been anxiously following the fate of many peoples defeated by the ‘colour revolutions’. But what is most shocking is the reluctance of people to learn from the mistakes of others, from the experience of others. And it is horrifying how fatal unlearned lessons can be.
We have consciously and, I believe, timely declared the current year the Year of Historical Memory. After all, in order not to be mistaken in the future, we must look back to the past as often as possible. And value it.”


Rise to the occasion

The Head of State, addressing those present, expressed warm words of gratitude to those who defend the honour of the country. Aleksandr Lukashenko first of all turned to journalists.
“You, dear friends, especially now, are at the forefront of events. You pass facts and opinions through yourself, work out informational attacks, beat them back in our direction. Last year I urged you to work harder, you heard me. And you didn’t let me down, firmly taking the informational agenda into their own hands,” said the leader of the Belarusian state.
The reception was also attended by our colleagues who covered the events that took place in Kazakhstan (among them — editorial columnist Lyudmila Gladkaya). The President admitted that he was very glad to see them. And he said that all the restrictions that journalists experienced there in terms of work were needed to protect them,

“That was my order. It was unacceptable to lose at least one person in this terrible massacre that unfolded in the first days of the new year in our Kazakhstan. I received information from all sources from other states, how you were hunted there.” 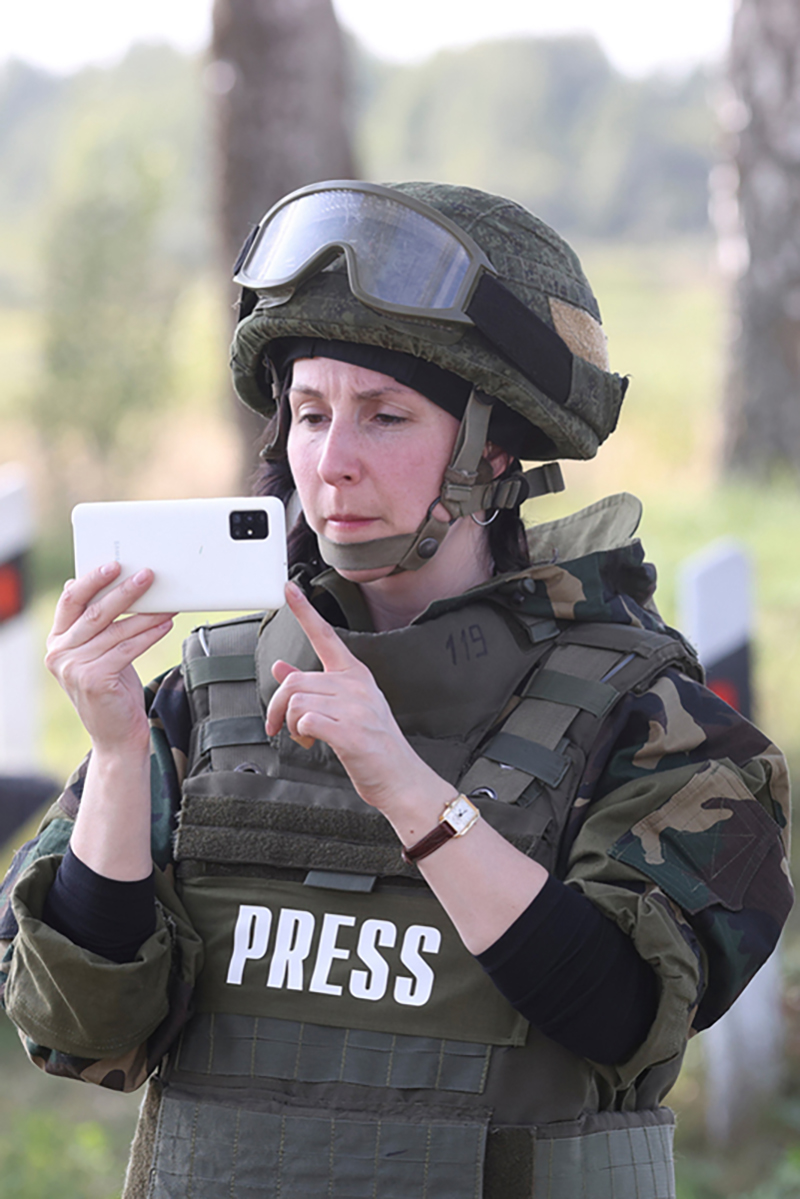 Our fellow journalists are constantly
at the forefront of the information wave.
The photo features Lyudmila Gladkaya.
Photo by Vitaly Pivovarchik

The Head of State emphasised the role of public opinion leaders, analysts, historians, political scientists, sociologists, who were also present at the reception. In his speech, Aleksandr Lukashenko noted that in the conditions of the information war, their intellect is a powerful weapon, “At a critical moment in history, you stood up on one front to protect the interests of your state, proved to be true patriots.”
The President addressed special words of gratitude to the winners of the Tokyo Olympics, “Last year, you had to simultaneously defend both the sporting honour of the country and the political position of the nation. And this is a new, if you like, trend of our time. Have you noticed that we no longer say that sports, education, culture, healthcare are out of politics? Today it has become obvious: it is not enough to win in sports, it is not enough to delight people with your creativity and just to be a professional.”
Aleksandr Lukashenko is sure: an athlete should be a patriot, be proud of his native country and broadcast it to people, as well as defend national interests and the state course in public, and not sit, as people say, under a broom.
The President said, “Everyone in his place — we all serve the country. This is our duty to the land that has nurtured us, to the state, which gives us the opportunity to reveal our talents and realise our potential.”
The Head of State noted that the theme of the evening — good moments and traditions of the Soviet Union — is more relevant than ever. The President congratulated those present on the upcoming New Year holidays, wished them health, happiness and success,

“Live long! And don’t worry. We are facing psychologically difficult times with this unfortunate pandemic, but this is no longer the pandemic that was in 2020, which converged on politics and other issues. Be healthy. And remember that our health is in the head.”