The President of Belarus, Aleksandr Lukashenko, has visited the assembly shop of Minsk MotoVeloZavod, drawing attention to the localisation of production. The Head of State subjected the enterprise to harsh criticism, saying that there is nothing Belarus-made here and that the goods are assembled from imported components. This topic was already discussed a year and a half ago, but there is still no progress. In particular, the Belarusian leader asked Nikolai Ladutko, the Director of Motovelo Plant, how localised the Belarusian motorcycle is. 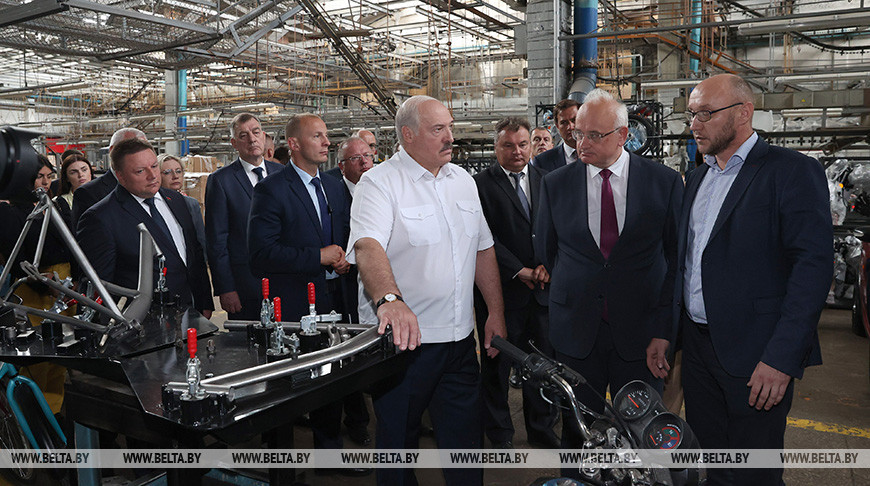 “Which Belarusian components are used in a motorcycle?” the President asked.

“A design project, an idea, a layout, a range of components...,” Nikolai Ladutko began to enumerate.

“Where are headlights, shields and engine manufactured?” clarified the Head of State.

“They are Chinese,” answered Mr. Ladutko.

Aleksandr Lukashenko drew attention to the fact that many components are currently being purchased abroad, stressing that we should strive to make our own. For example, localisation reaches only about 20 percent for separate items while this approach carries certain risks taking into account the current situation in the world and sanctions pressure, “We must produce our own!” the Head of State emphasised. “It’s not rocket science to import spare parts and assemble them here... It’s good that we have good relations with the Chinese. However, it should be ours as much as possible and the same refers to all motorcycles and bicycles.”

The Head of State was dissatisfied with the fact that nothing has changed at the enterprise since his last visit. He set a new challenge, “From January 1st, you have to surprise me. Nobody wants this job. Everything here remains in the same way since I visited the site a year ago.”