Single market for gas, oil and oil products. Common digital space of the EAEU. What other topics were tackled by the President of Belarus at the Supreme Eurasian Economic Council. 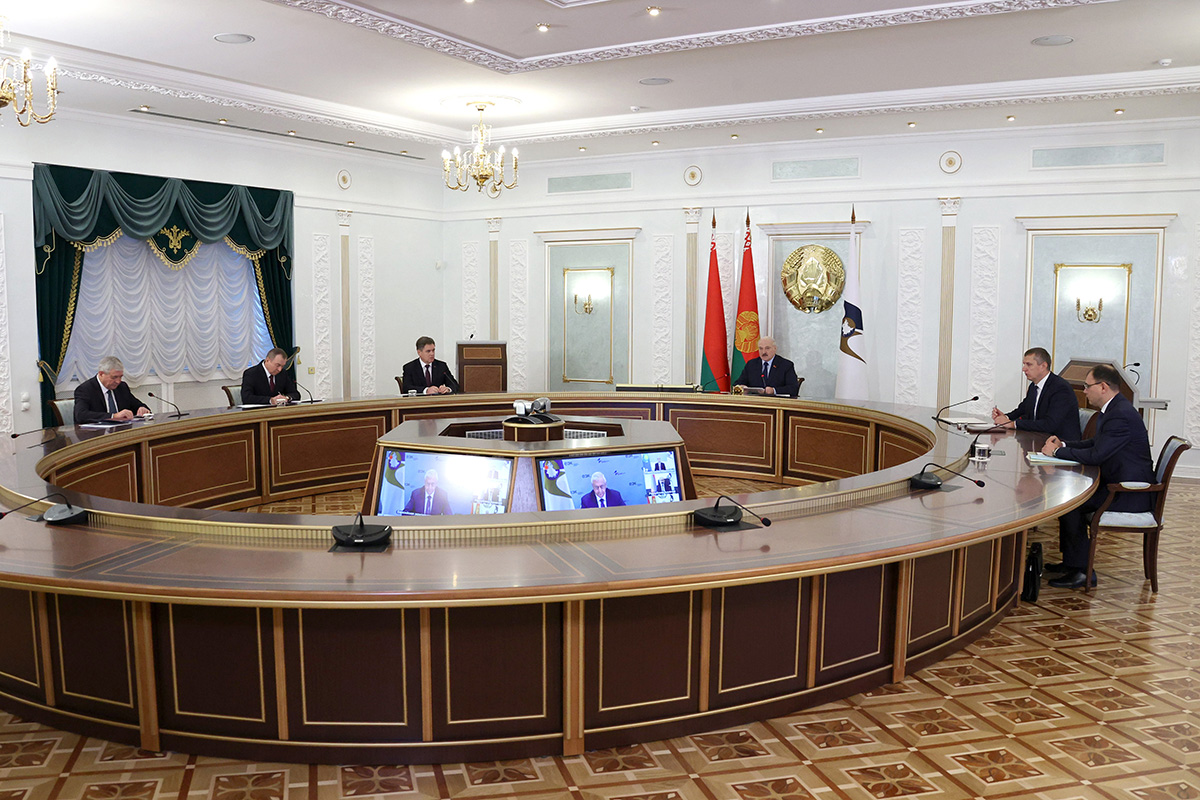 The online summit focused on the economic aspects of co-operation, with Aleksandr Lukashenko stressing the need to negotiate the most sensitive issues,

“Let me remind you, this is the formation of a single gas market... In an effort to create a common market for energy resources, it is necessary to take into account the interests of all member states of our Union. Only in this way can we ensure its stability and durability.”

The Belarusian Head of State outlined a number of areas that should be prioritised in integration. First of all, this concerns the formation of the digital space, and here, according to Aleksandr Lukashenko, there is still work to be done.
Prospects for a deeper development of transit potential are also associated with the digital space,

“The development of the draft agreement on the unified customs transit system should be accelerated. Its adoption, along with an agreement on the use of navigation seals in the Union for tracking shipments, will contribute to an increase in the transit flow of goods.”

As far as the development of co-operation in the field of agriculture is concerned, Minsk proposed the following,

“We must seriously focus on the food security of our countries, protection from external price shocks caused by panic demand for certain agricultural products.”

The President added that it is necessary to reach a final solution to the problem of unilateral bans and restrictions on the supply of goods.
Moreover, Aleksandr Lukashenko drew attention to the need to furtherimprove the financial infrastructure of the EAEU,

“To increase the number of joint projects with a high integration component, it is necessary to provide access to project financing in the form of long-term loans with a preferential interest rate. To do this, it is necessary to change the way the Eurasian Development Bank operates.”

The President of Belarus also raised the issue of expanding the use of national currencies,

“Excessive use of one or another foreign currency in calculations deprives us of competitive financial and economic advantages, threatening the security of our countries. Therefore, the EAEU should step up efforts to promote the use of national currencies.”

At the end of the summit, the participants approved a statement on economic co-operation between the EAEU member states within the framework of the climate agenda.

Deputy Prime Minister of Belarus, Igor Petrishenko, commented on the gas issue after the summit at the request of journalists, “It was reported about two fundamental disagreements, which, unfortunately, still exist at this stage. These disagreements are not new. They were back in 2018, when we signed concept documents. This refers to the tariff setting for gas transportation through the territory of the EAEU countries.”
Igor Petrishenko explained that those countries that do not have these resources are interested in equal tariff conditions for the transportation of blue fuel, “Not that there are certain conditions for national entities, but for entities that are located outside the territory of the country that has these resources there are different ones.

Aleksandr Lukashenko suggested to discuss this long-standing issue in person and decide finally: either we are doing it at this stage, or we are acting in other directions.”

The most important issue of the narrow-format meeting was the economic pressure exerted by third countries on the EAEU states. From now on, they will oppose it together. Igor Petrishenko recalled that it was the initiative of the Belarusian leader, and at this stage it was possible to come to a consensus, “A set of six responses has been developed. And if a request is received from one of the states, the Eurasian Economic Commission will prepare proposals and inform the Supreme Eurasian Economic Council, which will decide on the launch of a toolkit of these six measures...

It is a big step that we will collectively respond with our integration education to unreasonable economic pressure.”

Economic growth has resumed in almost all EAEU states. In January-June, trade between the EAEU member states increased by almost a third (31.9 percent), and the volume of foreign trade of the Eurasian Economic Union with third countries — by a quarter. Moreover, such indicators were achieved despite the fact that some member states of the Union are subject to illegitimate sanctions from some countries.

It is important to develop the potential of cross-border transport arteries and logistics hubs. The integration of the Eurasian Economic Union with the Belt and Road initiative and the formation of a modern logistics infrastructure will significantly increase the economic impact of the Union on world commodity flows.

The important issue of further integration today is the formation of common markets for gas, oil and oil products. These issues directly affect the energy security of our countries. The Kyrgyz Republic is in favour of adopting a draft international gas treaty agreed by all countries within a realistic timeframe.

Elimination of obstacles in mutual trade in the EAEU is one of the priorities of the Union, the purpose of which is to ensure the functioning of the internal market without exceptions, restrictions and barriers. Fulfilment of the existing agreements in this area will strengthen the foundations of the Union, and the absence of barriers will increase not only the level of confidence of states in each other, but also competitiveness in foreign markets.

In a pandemic, it is important to search for new points of interaction in this area based on the competitive advantages of our countries. It is about consolidating efforts in order to more efficiently use human, land, water and financial resources, as well as scientific and technological advances. We propose to develop a joint programme of co-operation to strengthen food security within the Eurasian space.

Challenges can be most effectively confronted only by working together. Collaboration is key at a time when our agendas set a common priority — tackling the COVID-19 pandemic, which is already considered the most difficult health crisis that humankind has faced in the past century.