The Nature and Ecology Museum of Polotsk is housed in… a former water tower. The central spiral staircase symbolises the tree of life. Each floor has its own theme and zest. 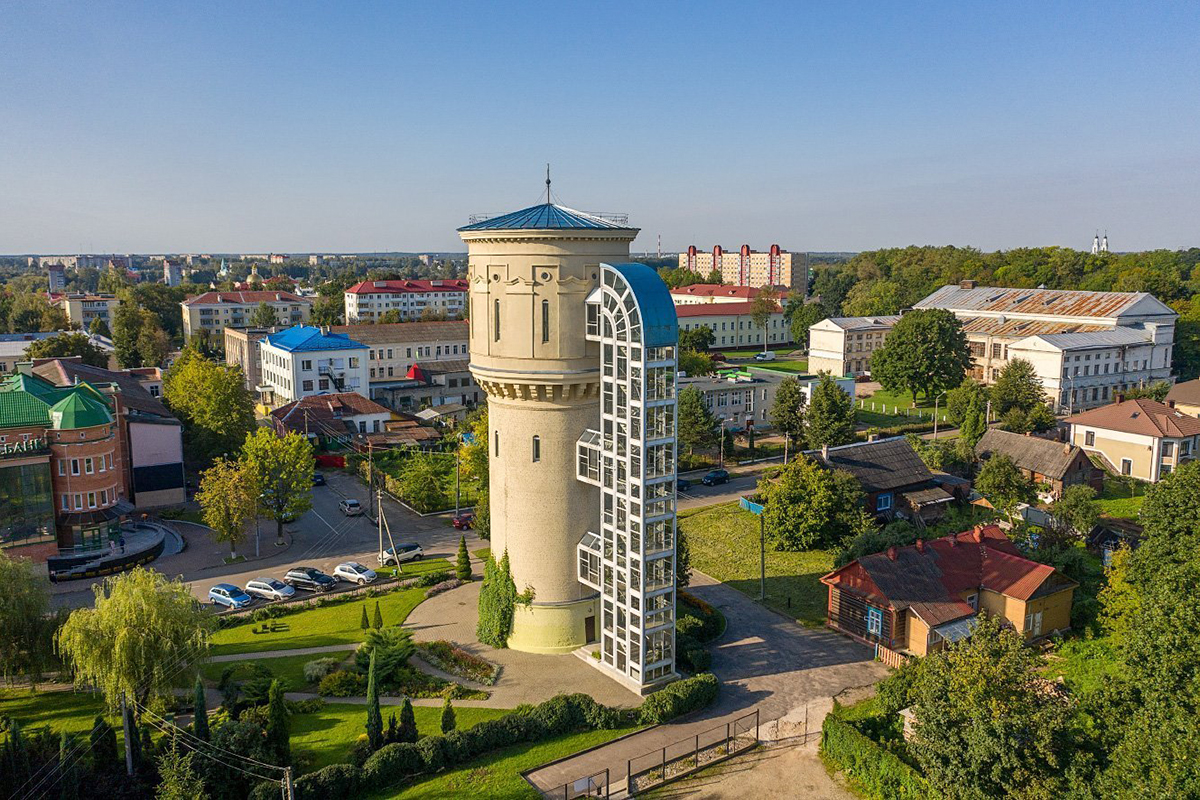 The ‘hostess’ of the tower, the Head of the Museum Natalya Mikhal loves her native city. One could offer her golden mountains — she will always choose Polotsk for its special atmosphere, comfort and history, she admits, “This is my city, my relatives are from here. As a child, I read the Young Naturalist magazine to rags. As a result, I didn’t surprise anyone with admission to the Biology Faculty of Vitebsk University. According to the assignment, I worked as a teacher in a rural school, and after the maternity leave I learned about a vacancy in the museum. A real gift of fate! From the first days I realised that it is my profession — and I was not mistaken.” 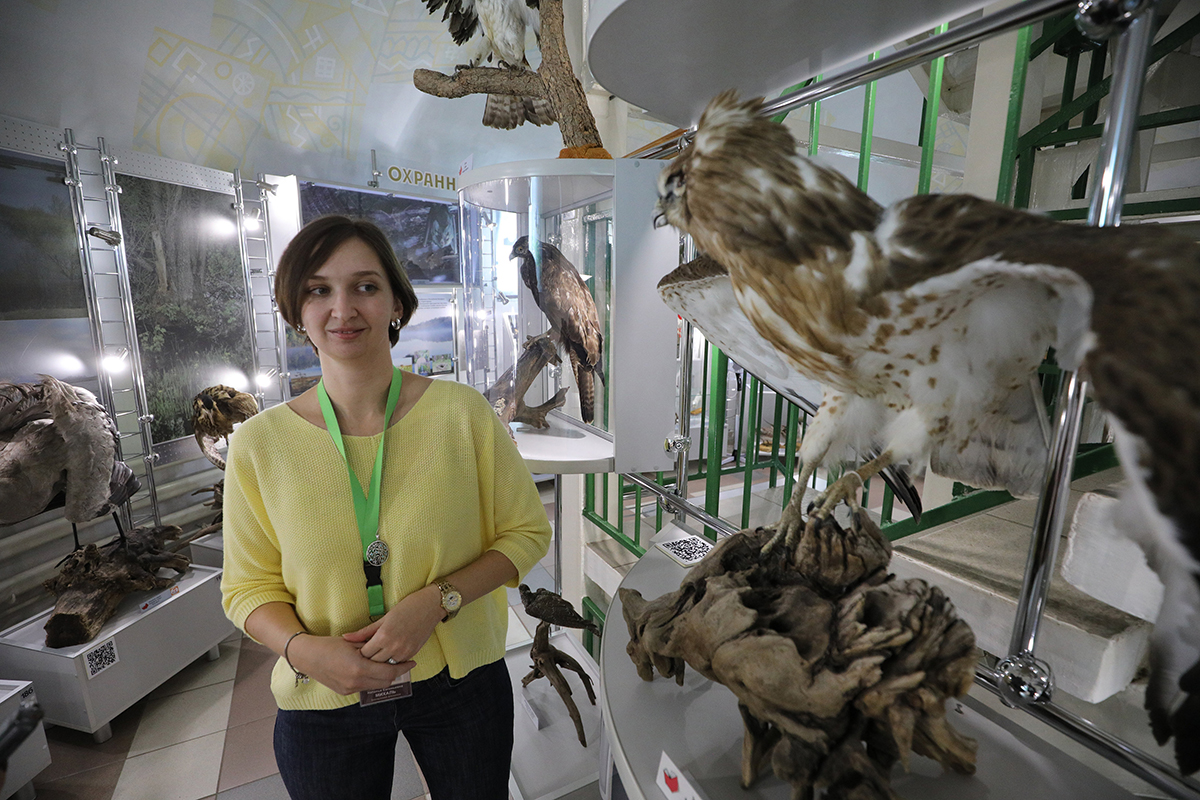 Together with her husband Sergei, Natalya is raising her ten-year-old son Matvei and four-year-old Anya. Their children are frequent guests in the tower. Every time her daughter asks her to show something new, the mother explains, “Today it’s a swan, tomorrow — bats. I think my work leaves its mark: Anyuta wants to be either a palaeontologist, or an animal tamer, or a farmer... Matvei knows every corner of the museum, he takes his sister by the hand and conducts excursions for her.”
The head of the family is a military man, so it is not often possible for everyone to get out somewhere together. This year they were lucky, Natalya notes, “Camping in Narochansky National Park was a great time. And in winter, the children and I went to Belovezhskaya Pushcha to visit Ded Moroz together with the family of my older sister Marina. We also visited the local museum of nature.”


In the footsteps of the aurochs 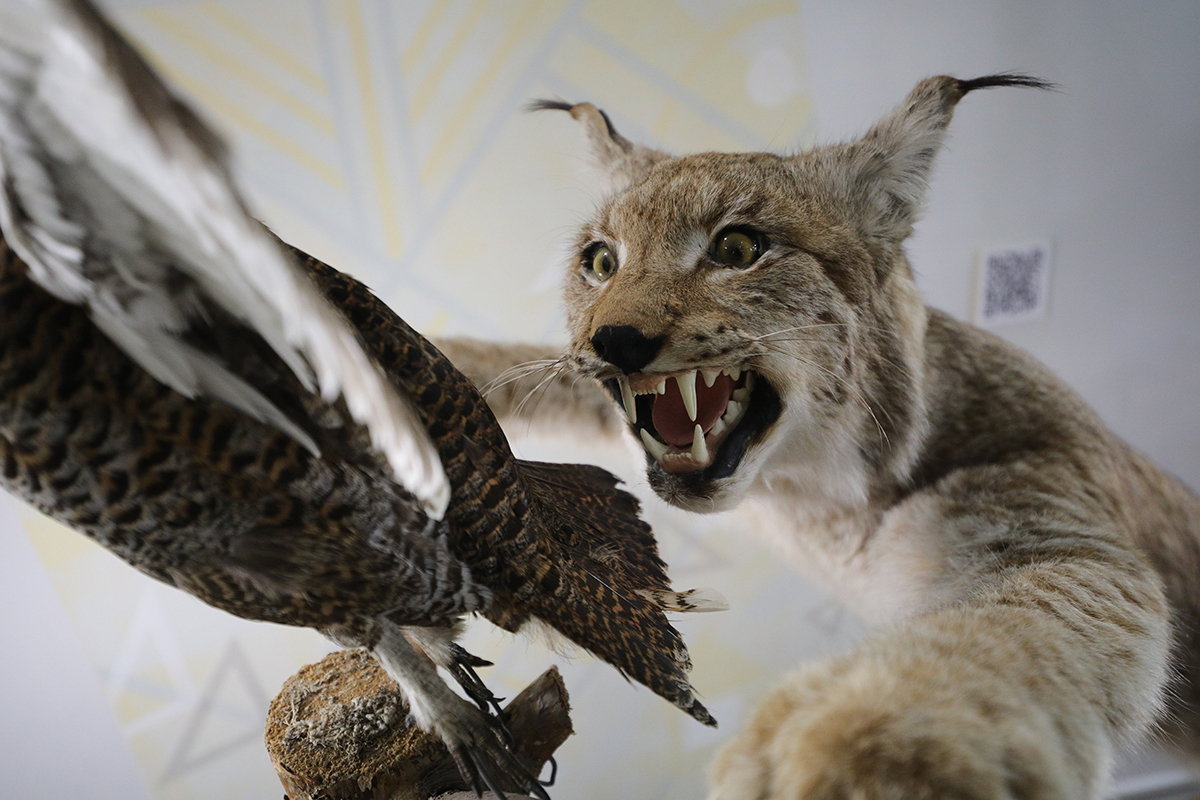 The height of the former water tower, built in the mid-1950s, is almost 33 metres. Since 2005, a museum with an impressive staircase has ‘signed in’ at it, like in a castle. The number of steps is a secret, intriguing Natalya Mikhal, “Let everyone count for himself. In addition to the inner screw, there is a glass outer one. It imitates a waterfall, indicates the connection between nature and man.”
All floors of the museum are a mirror of this concept. The first one is dedicated to the richness of the flora and fauna of Belarus. The second is environmental issues. The third demonstrates the policy of our state aimed at protecting the animal and plant world. At the top, the fourth level, there are dioramas. Standing at one of them it may seem: take a step — and you are in the abyss. This artificially created abyss is a symbol of ecocatastrophe. 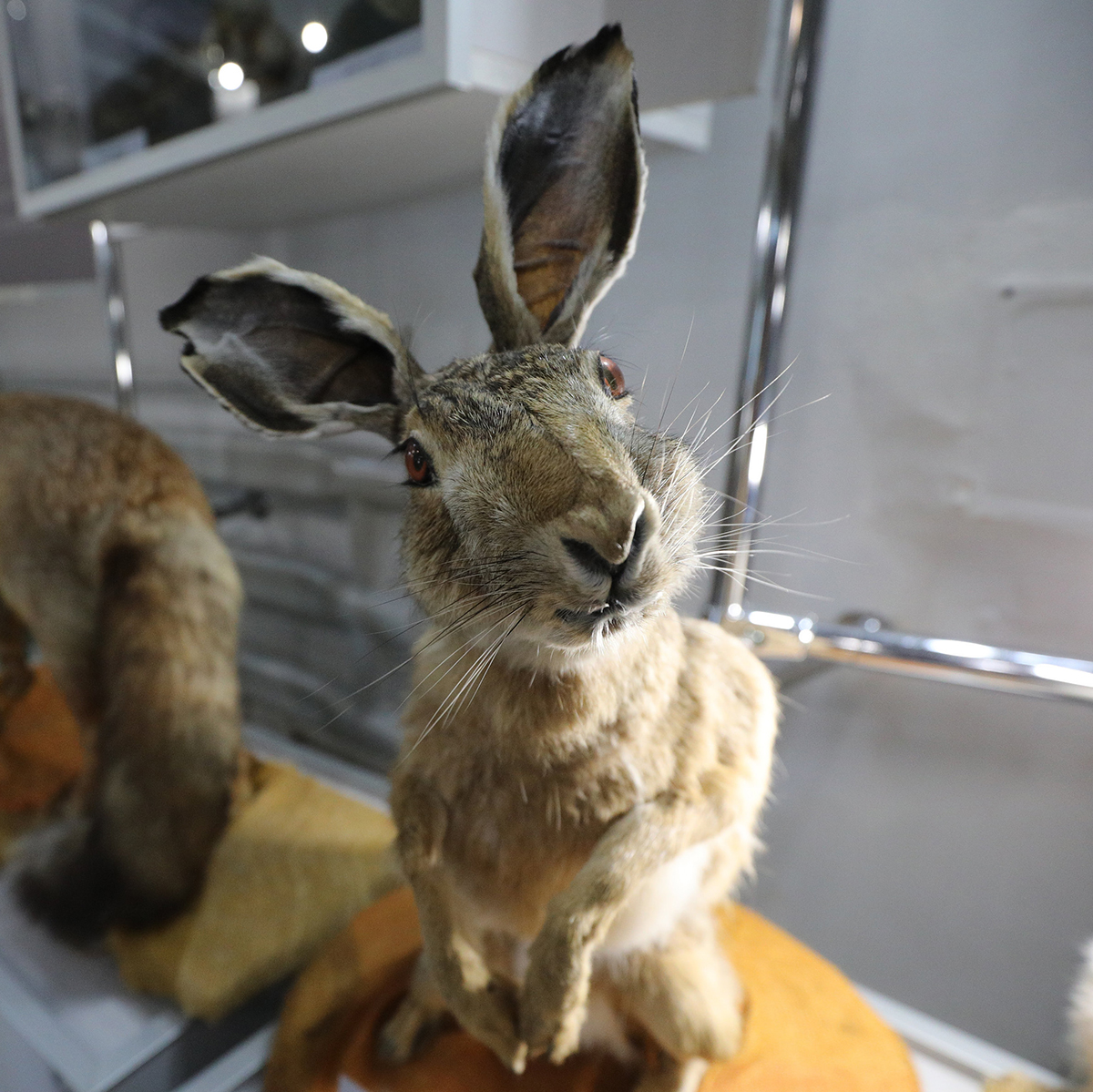 We are examining the exhibits, which, by the way, are more than 1000 in the museum. Stuffed animals are mostly open: one can study them in detail. One of the rarest specimens — the horns of the aurochs — is still under glass. The last of them died out in 1627, Natalya gives a brief background, “All that reminds of these giants is their remains. These horns were found while digging a reclamation canal in the Polotsk District. The degree of their preservation is unique.”
There are even more ancient finds. For example, fragments of the humerus and mammoth tusk.

The Nature and Ecology Museum of Polotsk is never empty. This year it was visited by people not only from our country, but also from Russia, China, even earlier — from England and France.
What exhibits are in the spotlight? Children are delighted with the huge dragonflies and praying mantis, ‘soaring’ between the floors. By the way, the models are life-size, but taking into account the realities of the Carboniferous period, when giant insects dominated the planet. 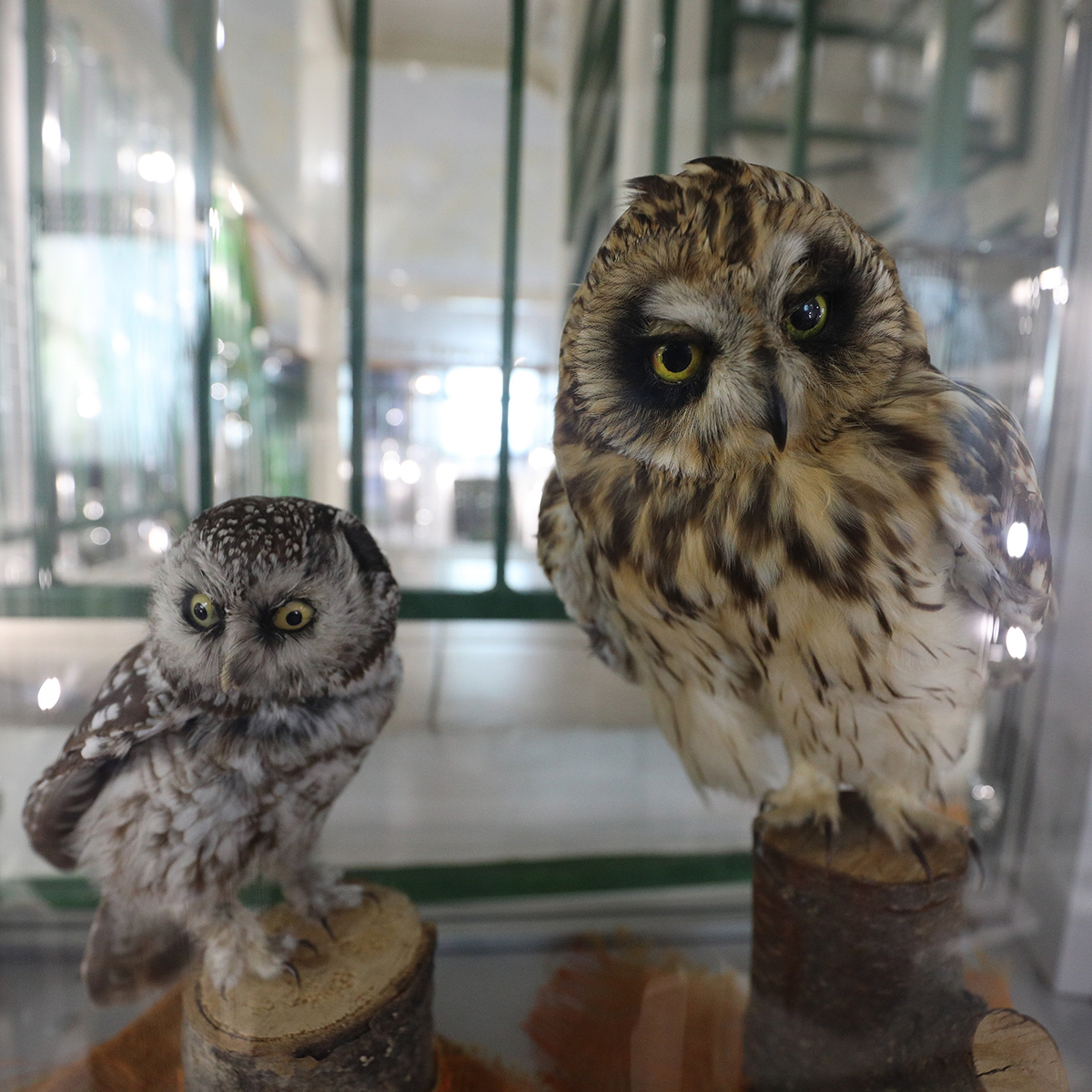 The guide draws our attention on the floor dedicated to environmental issues, “Shells, corals, the luxurious shell of the nearly extinct hawksbill sea turtle — unfortunately, many perceive them not as part of wildlife, but as décor and souvenirs... Thus, this is a tragedy, a huge loss for the ecosystem.”
In their whims, people went further — they began to get exotic pets. However, even stick insects got the works. Right now, the museum is waiting for a new exhibit: a stuffed green iguana. Natalya catches my watchful eye, “Almost all the stuffed animals, birds that we have presented died a natural death or perished, for example, freezing in winter or receiving an electric shock... Children often ask this question with tearful eyes. We reassure that our museum is not built on bones, but stuffed animals are an opportunity to remind people of the fragility of wildlife...” 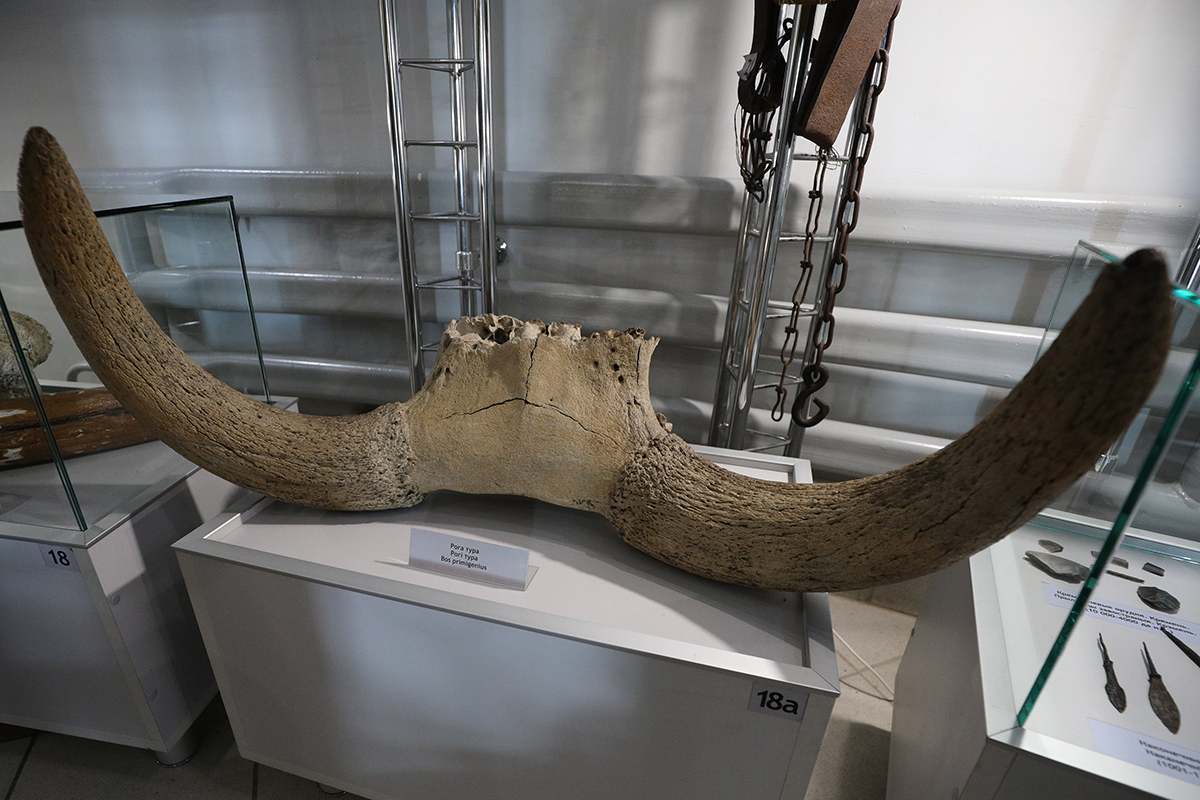 At the same level there is a stand dedicated to environmental issues with miniatures of factories, plants, even a garbage dump. There is also information about reducing waste emissions, about technologies that help to live in harmony with nature. Natalya Mikhal outlines, “Naftan is a good example, where a delayed coking complex was commissioned in 2021, which reduced sulphur dioxide emissions by almost 17,000 tonnes!”
The third exposition level is dedicated to protected areas. The real kingdom of rare animals and plants, many of which are listed in the Red Book. The short-toed snake eagle is one of Natalya’s favourites, “We arrived at the museum at the same time. I came to work as a senior researcher, and it was presented for the tenth anniversary of the institution. This bird is powerful, beautiful, and also brave. It has no immunity to snake bites, so every hunt of a feathered predator is a risk and at the same time jewellery work.” 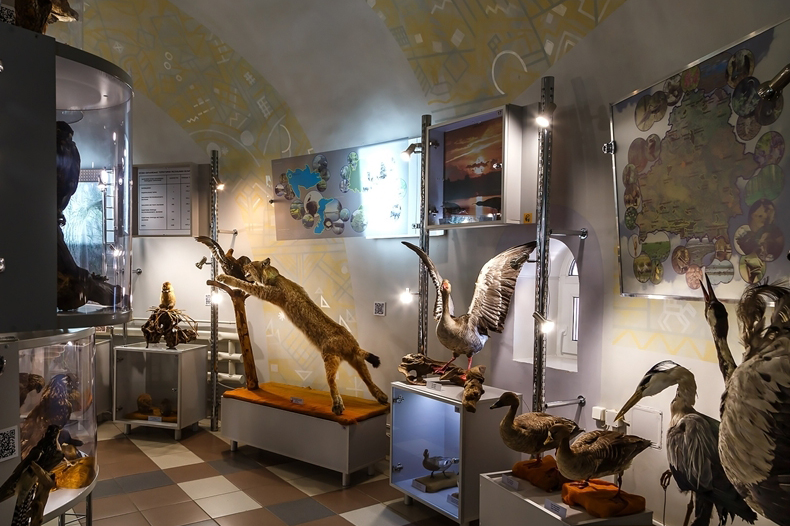 A lynx is a favourite exhibit for a photo, the head of the museum states, “On the fourth floor, in addition to stuffed animals and dioramas, there are aquariums with live fish and turtles. A two-metre catfish, which was moved here from the local museum of local lore is the pride of the hall. That’s where I saw it as a child. Now I also talk about how 66 years ago this 100kg miracle was caught on Lake Lisno in the Verkhnedvinsk District.”

From the height of the museum tower, its garden, divided into three zones, looks just magical. There are also Red Book species among all the richness of plants: mountain violet, anemone, European globe flower