The time from Christmas to Maslenitsa in past centuries was full of dancing. Receptions were arranged everywhere — from the brilliant St. Petersburg to Nesvizh. Today, the tradition of winter evenings takes on a new meaning. 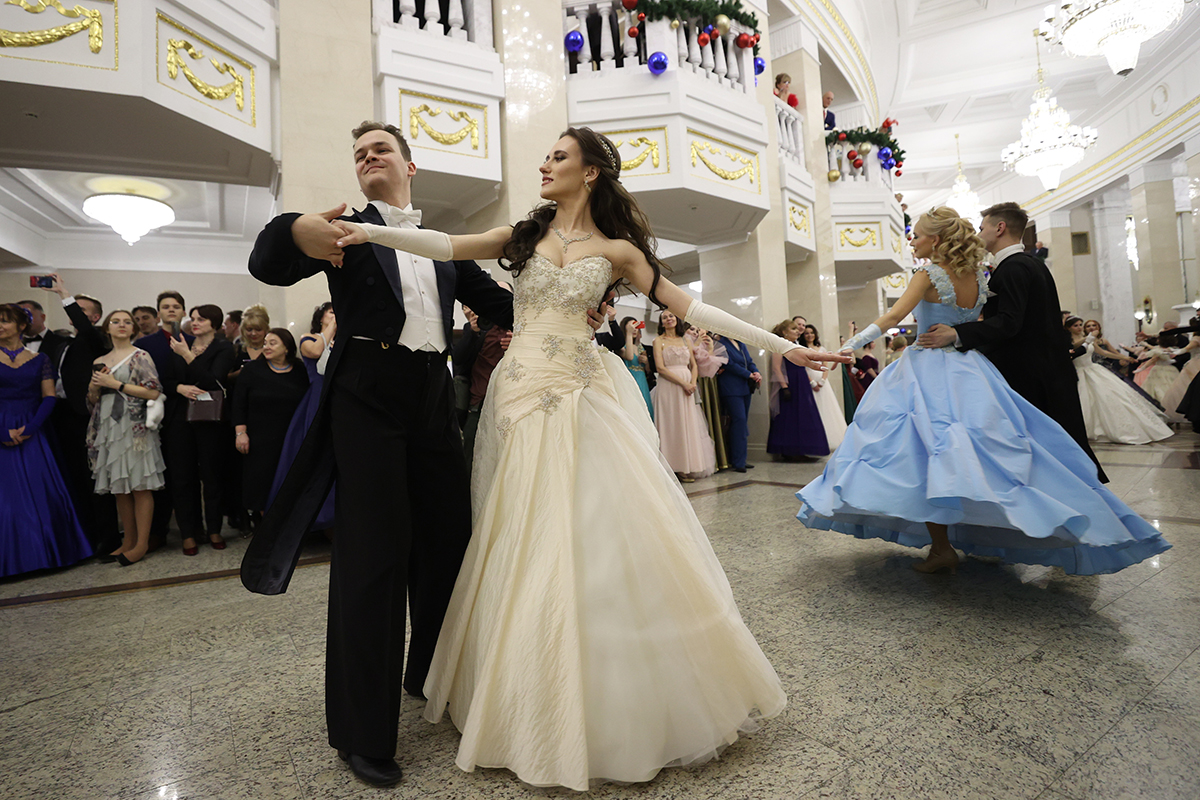 Plunge into the love affairs of the Bolshoi 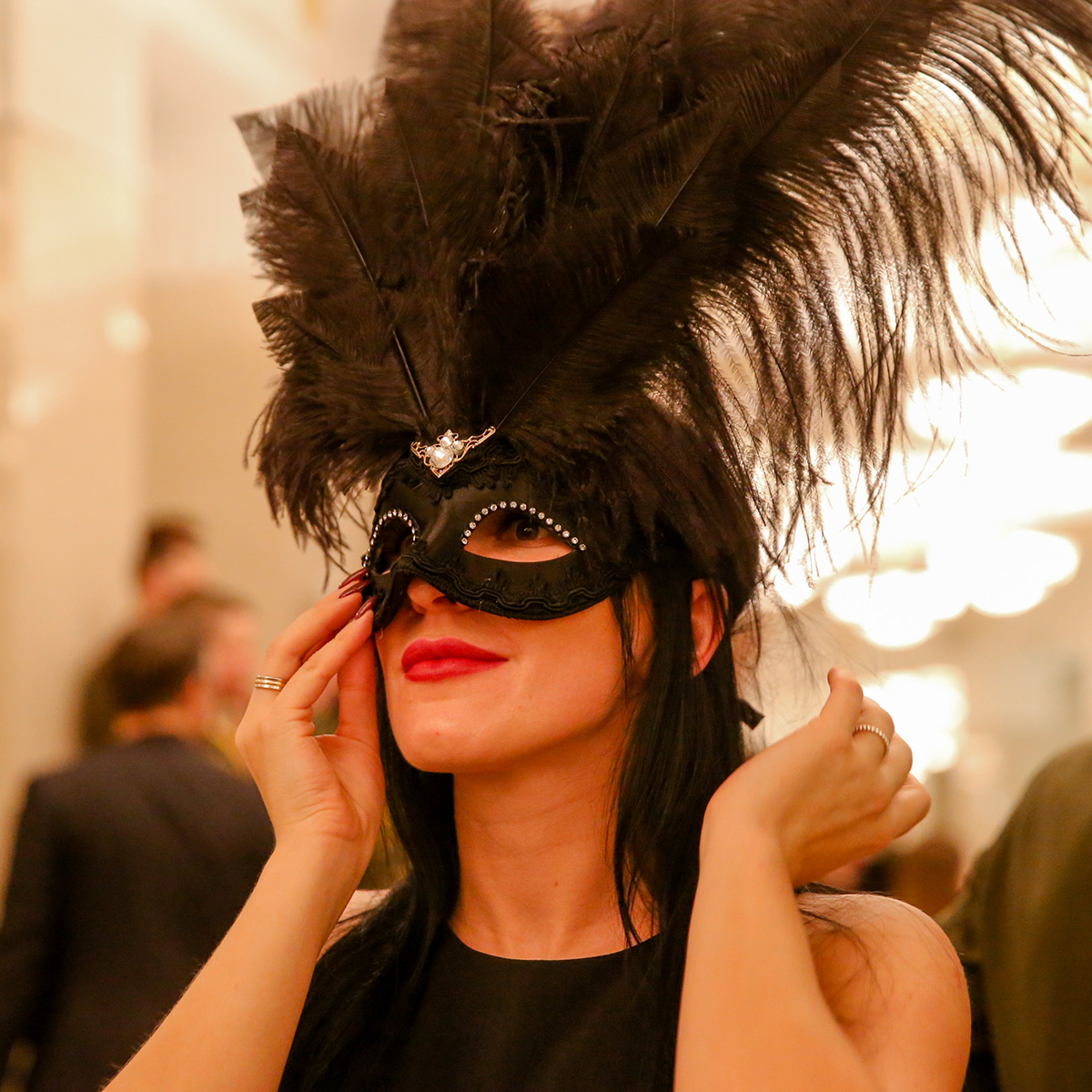 Do I know you? For more than ten years, on the night of the Old New Year, a magnificent masquerade ball has been held at the Bolshoi Theatre of Belarus. The date was not chosen by chance. In Russia, dressing up was associated with paganism, which is why they were held at Christmas time.
The dress code in the Bolshoi is strictly observed: they will not let you in without a carnival costume and a mask. Harlequins, Spanish women, Greek goddesses, hussars and mysterious strangers with flirtatious fans — everyone is here! The programme is rich in entertainment: locations with astrologers, fortune-tellers working with coffee grounds and Tarot cards are created in the theatre lobby. You can take part in a tea ceremony or watch a Christmas-themed performance. But the main thing is that the leading singers of the opera give the concert Love, Intrigues and Passions of Kings, after which a real ball begins with the participation of several orchestras. Dancing is planed until late at night. Towards the close of the masquerade — namely at three o’clock in the morning — fireworks bloom at the fountain. 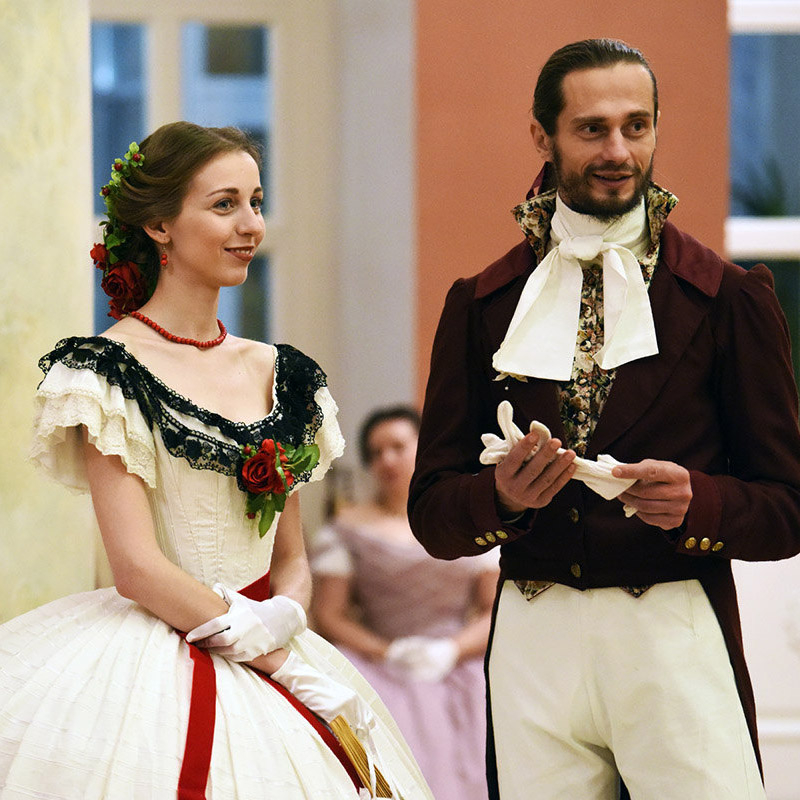 ‘You can also look at the whirling couples under the rumble of impetuous bows’ in Gomel. On the high bank of the Sozh, in a luxurious palace that once belonged to the generals Rumyantsev and Paskevich, social events are arranged according to all the canons. They invite the manager of the ball, the dance master, as well as the best orchestra in the city. The participants waltz in a spacious two-story columned hall, which still remembers Emperor Nikolai I. The Russian ruler personally came to Gomel three times. It is likely that he had a chance to dance as a guest of his beloved ‘father-commander’ Paskevich.
With this in mind, modern Gomel residents focus on classical dances that existed in the 19th century: polonaise, waltz, polka. A detail that may be of interest to the ladies is that there are many officers of the Gomel garrison among those invited. 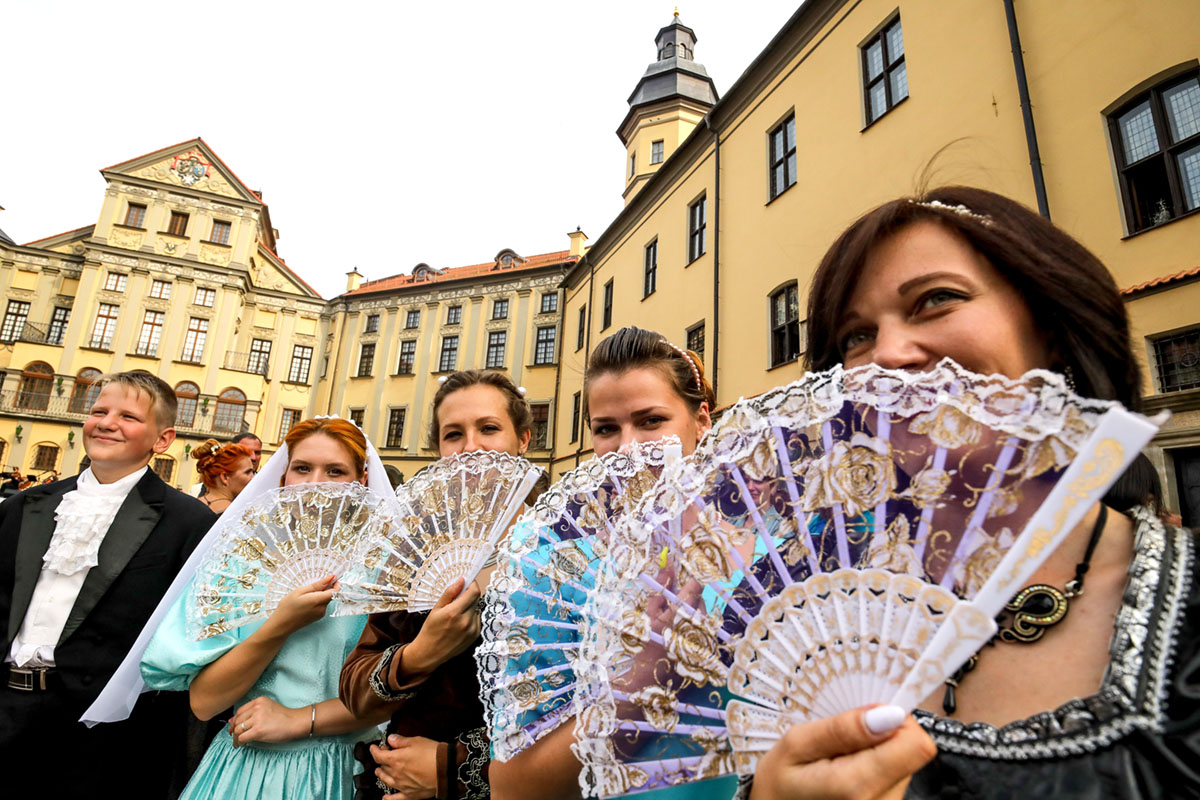 The Nesvizh Castle was the main residence of the Radziwill family for several centuries. It is known that Karol Stanisław Radziwiłł, popularly known as Panie Kochanku, organised the largest festivities here. Noisy feasts with hunts, fireworks and plays from the fortress theatre. The archives contain information that thousands of bottles of the best wine and champagne, barrels of oysters and other delicacies were brought to the balls. 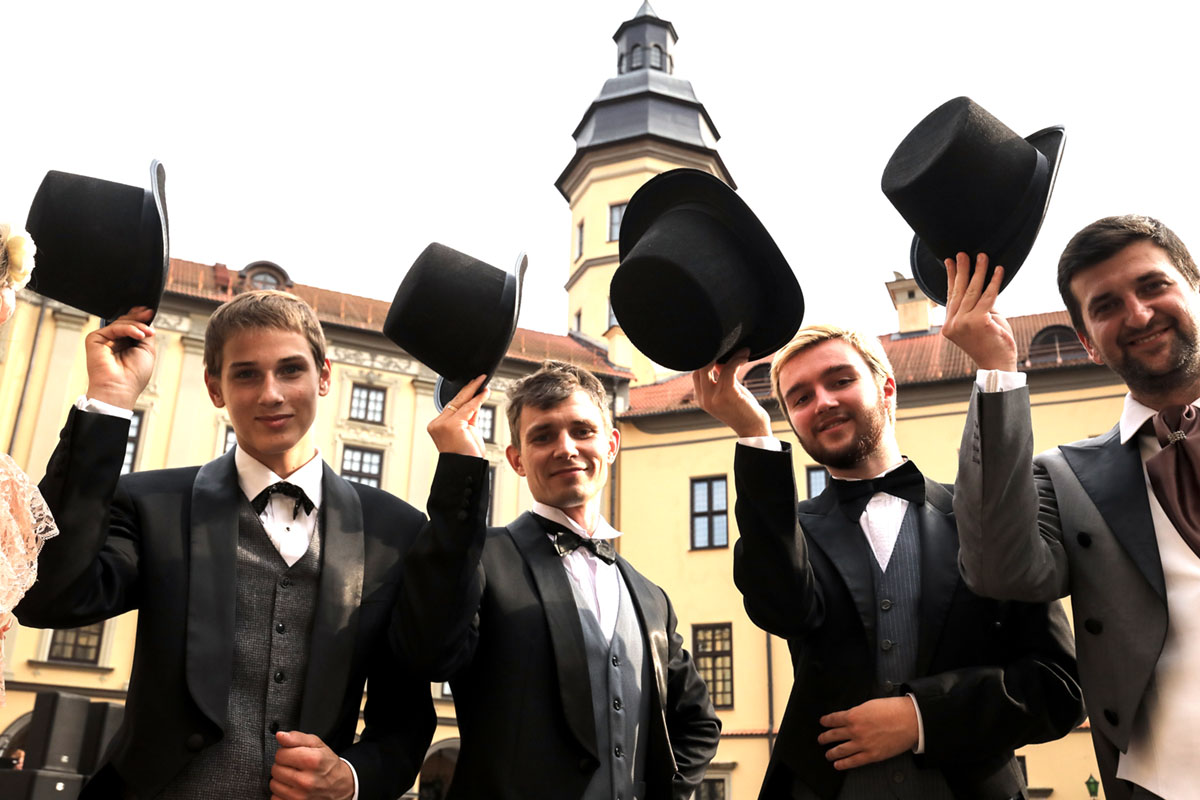 Once, a rich host even arranged a winter in the middle of summer for the entertainment of the guests: he strewed the road from the castle to the church with salt and invited everyone to ride a sleigh!
Today, guests are invited to the Nesvizh Castle to Christmas Balls with Adventures. The programme includes dancing, ballroom games and gifts. Everyone can feel like a gentleman here.

Waltz in the capital

The ball, which all the young boys and girls of the country dream of attending, takes place in the Palace of Independence. The best students, scholarship holders of special funds, olympiads, laureates of creative and sports competitions are invited. 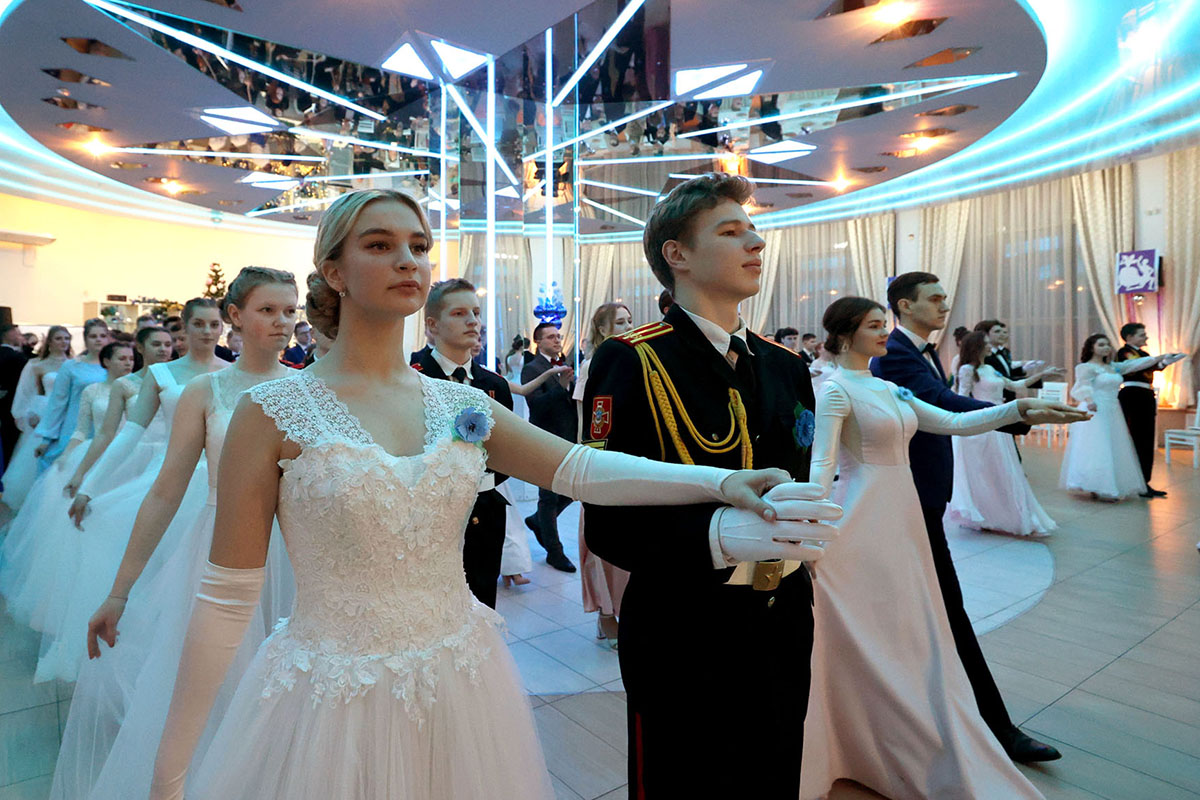 At the same time, you need to endure a tough dance casting: the guys are trained for the cherished evening for six months! The host of the evening is President Aleksandr Lukashenko.
The main dance in the Palace of Independence is waltz. It’s simple: it was the most popular one with youth in the 19th century. However, the entrance at the presidential ball is always made with polonaise, which is a complex, but sublime and solemn dance.


Return to the time of Potemkin 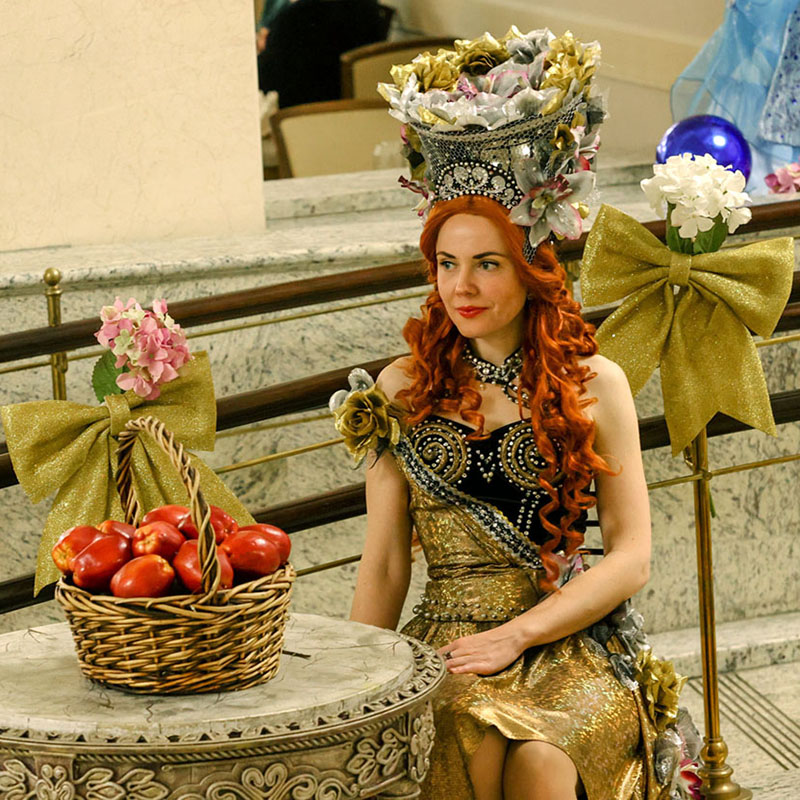 The favourite of Yekaterina II left behind a rich legacy in the small town of Krichev — the palace of fascinating beauty still amazes with its decoration. It’s no wonder! The author of the project is the creator of the Tauride Palace in St. Petersburg, Ivan Starov. Balls with an imperial scale were in place here.
In our time, Krichev museum workers focus on the historical component of receptions. Therefore, there are always many reenactors from all over Belarus among those invited. Powdered wigs, tight corsets, fluffy skirts and snow-white boots — the brilliance of the outfits impresses with authenticity. And mazurkas, country dances, cotillions will help you to feel the Yekaterina’s era.