The President of Belarus gave an interview to Dmitry Kiselyov, General Director of Rossiya Segodnya international news agency. This  interview, as the well-known Russian journalist later emphasised in his conversation with his Belarusian colleagues, has one important subtext. It allows a deeper understanding not only of the logic of the actions of Aleksandr Lukashenko himself, but also of the Belarusian people when they support the President. Among the topics raised were bilateral relations between Belarus and the Russian Federation, integration within the framework of the Union State and constitutional reform. They could not help touching on perhaps one of the most discussed issues in our countries and worldwide: the refugee crisis and the approaches of the European Union to our country. As always, Aleksandr Lukashenko was sincere and frank, “They throw a noose around my neck, tighten it and say: protect us. I honestly told them at the very beginning: guys, you decided to aggravate relations. You accuse us of this plane and so on and so forth. Although not a single fact is on the table. You started strangling Belarus.” 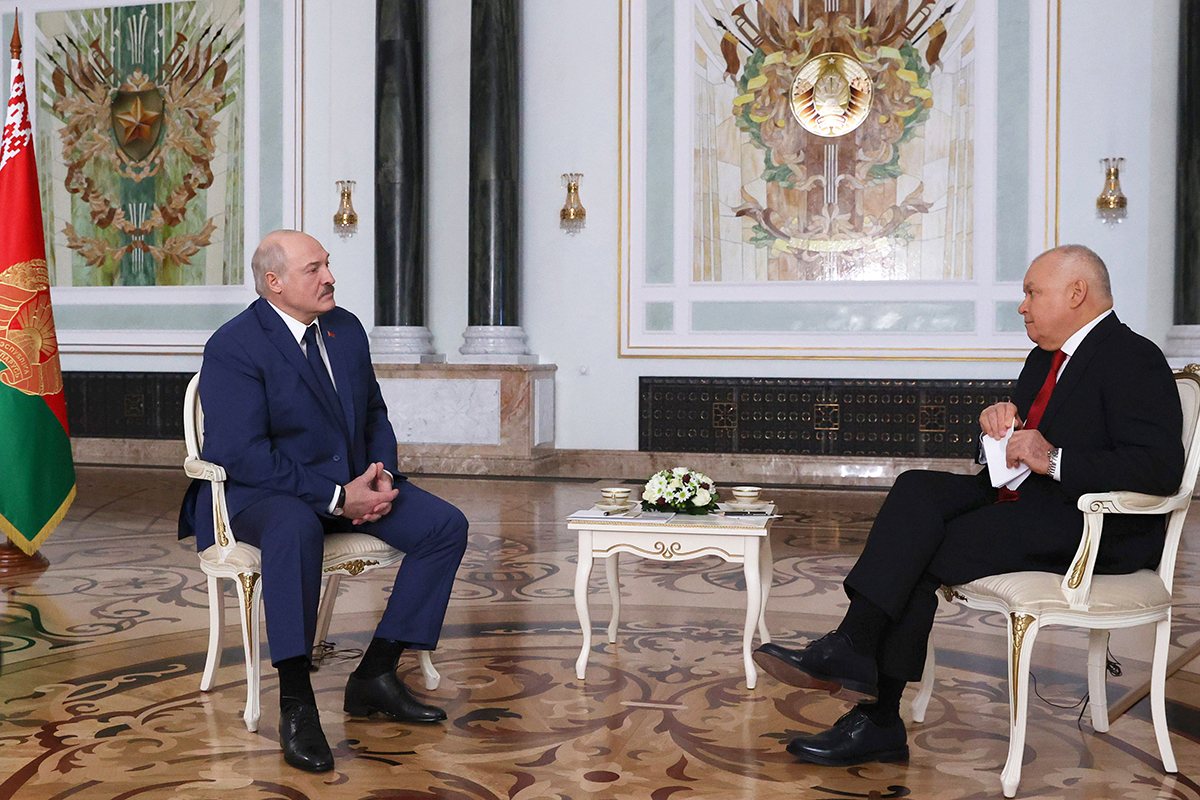 As you know, the demand for an interview with the President of Belarus is huge. More than four dozen publications from all over the world wish to talk with the Belarusian Head of State. Dmitry Kiselyov’s conversation with Aleksandr Lukashenko lasted two and a half hours. On its completion, the Russian journalist noted that the conversation was intense, but with very good feeling, absolutely sincere, after which there is a feeling of well-done common work.
Dmitry Kiselyov gave the following characterisation to the Belarusian leader as his interlocutor. For him he is a ‘human discovery’,

“The decisiveness with which Lukashenko is ready to defend the state he created was a revelation for me. In fact, he is the founder of the state of Belarus, there is no other founder and it is impossible to imagine otherwise.

The interview was full of significant questions of the day. One of the topics, for example, concerned the strengthening of NATO’s positions on the western borders of the Union State. In particular, a couple of weeks ago at the NATO Talk 2021 conference in Berlin, the Secretary General of the North Atlantic Alliance, Jens Stoltenberg, said that if Germany refuses to deploy US nuclear weapons on its territory, then it will be transported to the east, in particular, to Poland. What does the President of Belarus think about this?
“Then I will suggest that Putin should return nuclear weapons to Belarus,” replied Aleksandr Lukashenko calmly.
“What kind of nuclear weapons?” the journalist tried to clarify.
“We will agree on what kind,” the Belarusian leader remarked calmly and confidently, adding that, “The nuclear weapons that will be most effective in such an engagement. I said that we are ready for it on Belarus’ territory. As a thoughtful landlord I haven’t destroyed anything [of the USSR infrastructure for nuclear weapons], all the depots remain in place.”


“Why did I become an enemy for the West? Not because I am a dictator and the rest but because all the sites, except one, where Topol [road-mobile ground-based strategic missile systems] used to be placed, have been preserved and are still ready for use. You know how the West reacts to nuclear weapons and other things,” said the President.

The President said that, against the backdrop of NATO exercises in neighbouring countries, he is forced to have response plans, “They have launched these manoeuvres in Poland, Latvia, Lithuania and Ukraine. What should I do as Commander-in-Chief? I should not succumb to provocations, but I need to anticipate what will happen to avoid a repeat of 1941 events. Stalin told everyone then not to succumb to provocations. Signals were coming from the Kremlin, while the war had actually begun here.

Therefore, I need to have plans, subdivisions and units of the Belarusian army that will respond to any attempt to create a conflict here — on the border of the Baltic states, Poland and Ukraine.

Unfortunately, they, Ukrainians, have run ahead of even NATO troops — as ever. They closed the airspace for Belarusian planes earlier than the European Union and Americans; it is exactly the same here, too.”

Representatives of the ‘democratic European Union’ believe (sincerely or over-confidently) that it is Belarus that should deal with the repatriation of refugees. This opinion was voiced to Aleksandr Lukashenko during his telephone conversation with German Chancellor Angela Merkel, “I say: you know, Angela, let’s not speak with such harsh words: grab from here and take out by force.

I told her straight away and at the end of the conversation I repeated twice more: I will try to solve this problem before the New Year, because we do not need it. People are out in Minsk, Grodno and elsewhere. You know how the population reacts. We will ask these people, who are legally with us on a tourist visa in a hotel and so on, to go back, because there will be no humanitarian corridor. And I have already returned more than a thousand of them to Iraq.”

“Have you returned them at your own expense?” Dmitry Kiselyov asked.
The Head of State replied that the evacuation flights were paid for by Iraq. However, our country also incurred expenses, already spending $12.5m on the maintenance of refugees (according to data from a week ago).
“Now it will be twice as much,” asserted Aleksandr Lukashenko.
“That is, all the care, food, heating, treatment...” asked Dmitry Kiselyov.
“Absolutely,” confirmed the President. “WHO members — the World Health Organisation — sent some socks, pads, diapers and things like that.” 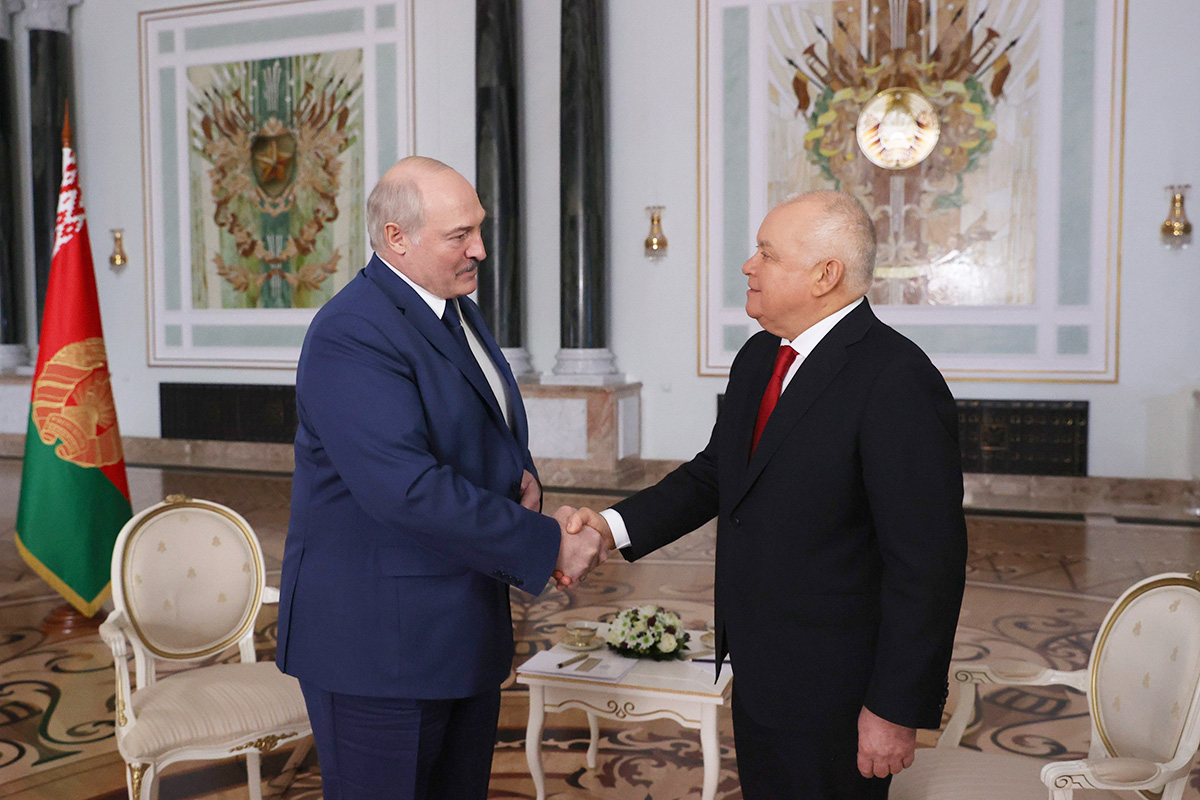 The interview also touched upon the status of Crimea. When asked by Dmitry Kiselyov, Aleksandr Lukashenko said,

The Belarusian leader also spoke about his intention to visit the peninsula, which he agreed with Vladimir Putin during his visit to Sochi and a joint boat trip on the Black Sea. At the same time, Aleksandr Lukashenko stressed that he has ‘every right’ to visit Crimea under whoever’s protectorate, management or ownership.
“It is my Crimea, too,” said the Head of State, noting that his first trip to the seaside was a trip to Crimea back when he had only one son.
According to Aleksandr Lukashenko, Vladimir Putin suggested they should go to the Crimea some time, “This is what was said. When we were on a boat with him in the Black Sea, the conversation touched on this matter. I said he could show me Crimea. He said no problem. Only, I said, on an aircraft and not by this boat, because, it turns out, you’d have to sail for a whole day to get there.”
The President noted that he would like to start such a trip by visiting Sevastopol, where the Russian Air Force base is located. At the same time, according to Aleksandr Lukashenko, the very fact of his arrival in Crimea will already mean the recognition of the peninsula as part of Russia,

“If the President [of Belarus] and the President of Russia come there, listen, what other recognition do you need? It is not a secret for me or for Putin. Moreover, it is an issue that does not exist. There is no issue about that between me and Putin.”