The state invests tens of millions of rubles in the restoration of palaces, castles, temples, churches and other monuments of architecture

A lot of work is being done in Belarus to restore the historical and cultural heritage. The goal is to maintain the proper technical condition of the facilities, adapt them to new functions and involve them in tourism and cultural movement. At the state level, these tasks are solved within the framework of a number of state programmes and local investment projects. In addition, measures for the protection of historical and cultural heritage, including repair and restoration work on historical and cultural heritage, are financed from the Fund for the Support of Culture and Art of the President of the Republic of Belarus. As a result, hundreds of monuments of architecture have been restored in Belarus over the past decades.  Sergei Sarakach, Deputy Culture Minister, spoke about which of them will be restored this and subsequent years, how much money has been spent on this, and how projects are prioritised. 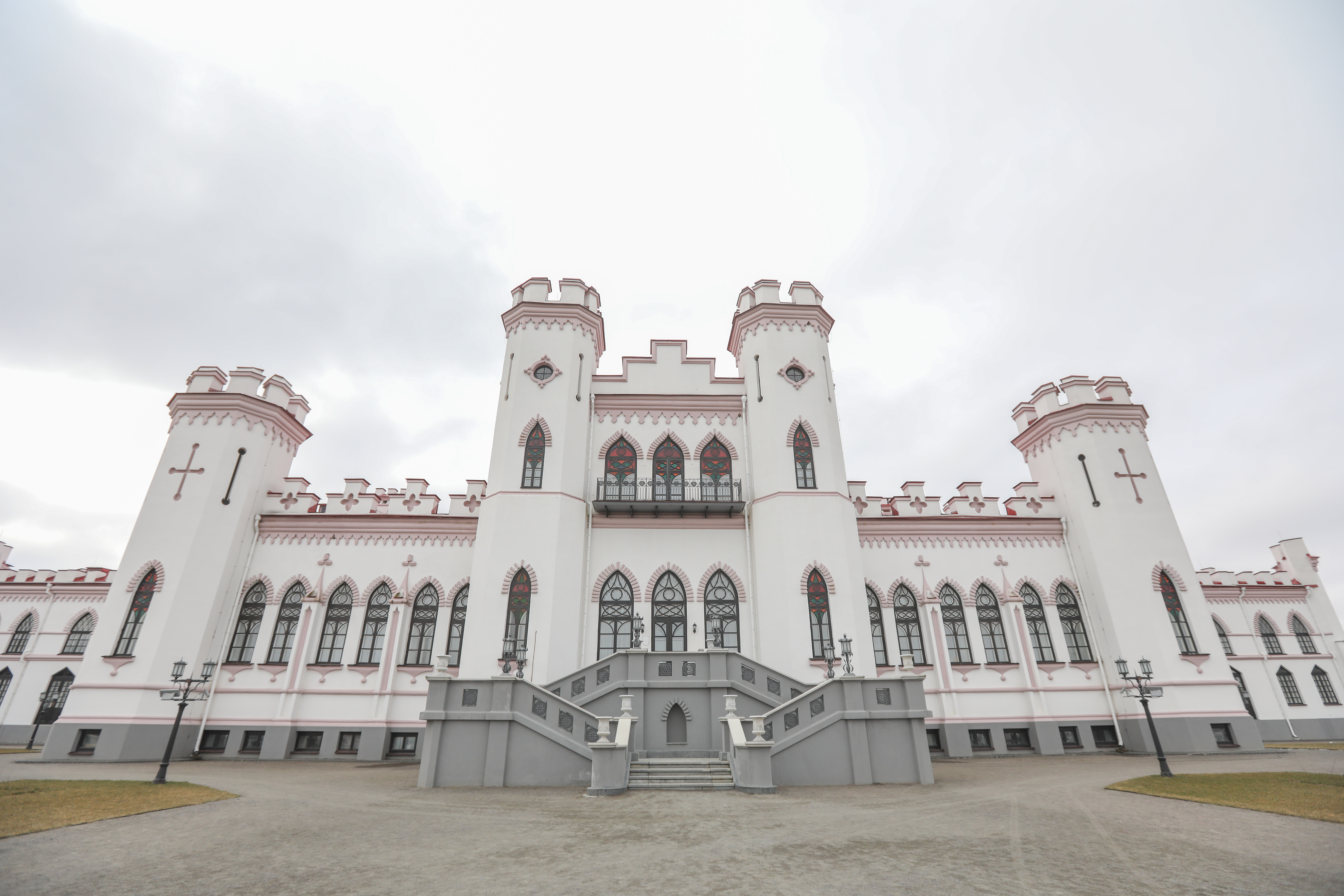 — What facilities of historical and cultural heritage are undergoing restoration work this year?
— As part of the State Investment Programme for 2022, it is planned to carry out work on a number of landmark facilities. This is a palace complex in the town of Ruzhany, Pruzhany District, Kossovo Castle and park ensemble. Reconstruction of the Transfiguration Church in Polotsk is underway. Monuments of architecture of the 18th century are being restored — the complex of the former Jesuit Collegium in the village of Yurovichi, Kalinkovichi District, and the palace and park ensemble in the village of Zhilichi, Kirov District. Work is ongoing in the Corpus Christi Church in Nesvizh and in the National Art Museum. Construction and installation work has been resumed on a facility that is not related to historical and cultural heritage, but no less significant — Minsk State Art College named after A. Glebov.
In addition, a huge number of facilities are being restored and reconstructed within the framework of regional programmes. These are the Old Grodno Castle, Novogrudok Castle, castles in the agricultural towns of Golshany, Krevo and many others. 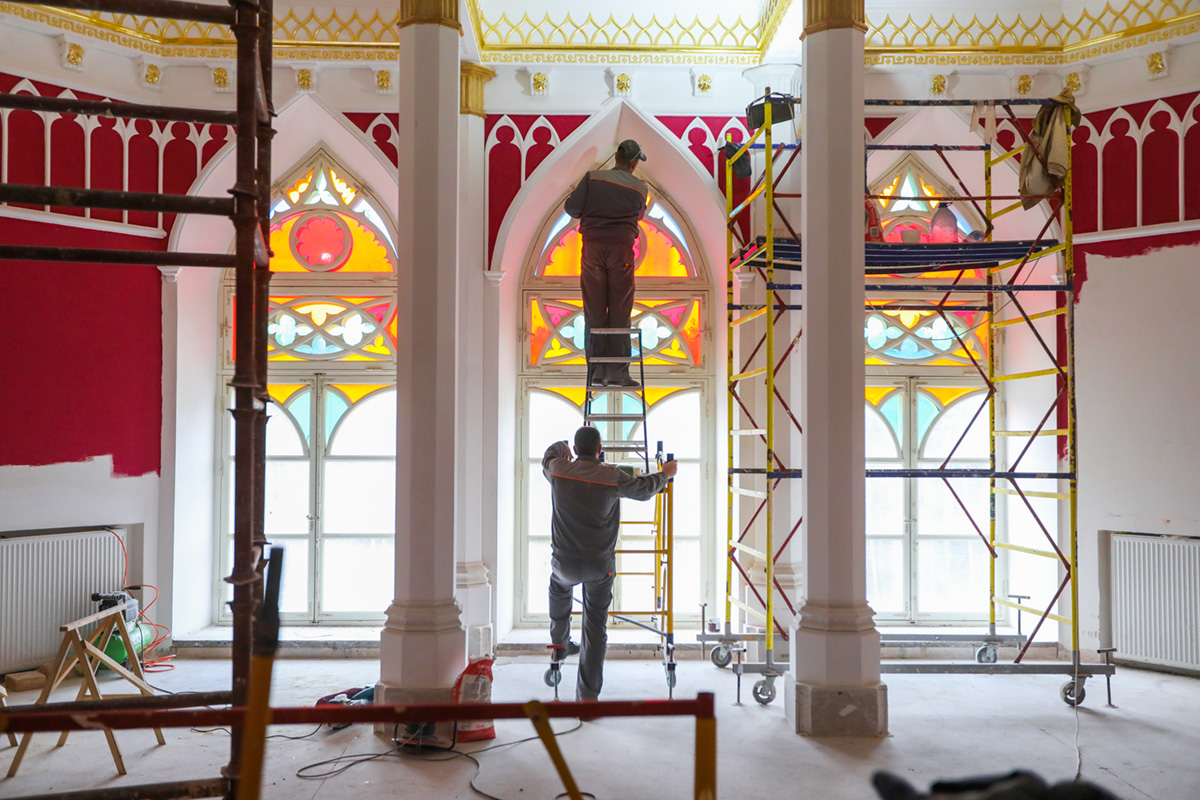 — Please, tell us how much money has already been invested in the reconstruction of, say, several facilities?
— Let’s take, for example, the ‘Restoration and adaptation of a single complex of buildings of the National Art Museum of the Republic of Belarus’ renovation project. From 2011 to the present, 38.5 million rubles have been allocated for its construction. A total of 18.2 million rubles have been spent on the ‘Monument of architecture of the 18th-19th centuries — a palace and park ensemble in the village of Zhilichi, Kirov District, Mogilev Region. Reconstruction with restoration and adaptation’ renovation project since 2010. Since 2010, more than 10 million rubles have been invested in the ‘Reconstruction and restoration of the Corpus Christi Church in the city of Nesvizh’ renovation project.
— What monuments of architecture will be put into operation over this year?
— First of all, it is planned to complete the entire complex of restoration work on the Kossovo Castle and park ensemble. In the fourth quarter, we plan to put it into operation and fully open it to tourists. Funding for these purposes has been allocated in full — more than 5.5 million rubles.
Work continues on the rest of the projects. Their commissioning is scheduled for 2025.
— And which ones were fully restored in 2021?
— Since the restoration work is long and expensive process, we try to allocate either queues or start-up facilities so that tourists can visit the facility until its final restoration. This is a kind of advertising for such a monument of architecture, and obtaining additional funds, which are also invested in strengthening the material and technical foundation of the facility, museumification, and development of expositions.
Last year, among the most iconic monuments of architecture put into operation, one can note ‘Reconstruction and restoration of the Corpus Christi Church in the city of Nesvizh, 3rd stage of construction. Crypt’. In addition, the North Tower of the former castle and the exposition of the Palace of the Sapieha family with fragments of defensive structures in the agricultural town of Golshany, Oshmyany Region, were put into operation. The fifth start-up facility of the first stage of conservation with the restoration of historical and cultural heritage — fragments of the castle of the 14th century in the village of Krevo, Smorgon Region. Certain works were finished and started in the Old Grodno Castle and the Novogrudok Castle. In November 2021, the first and fourth launch complexes of the National Art Museum were put into operation. 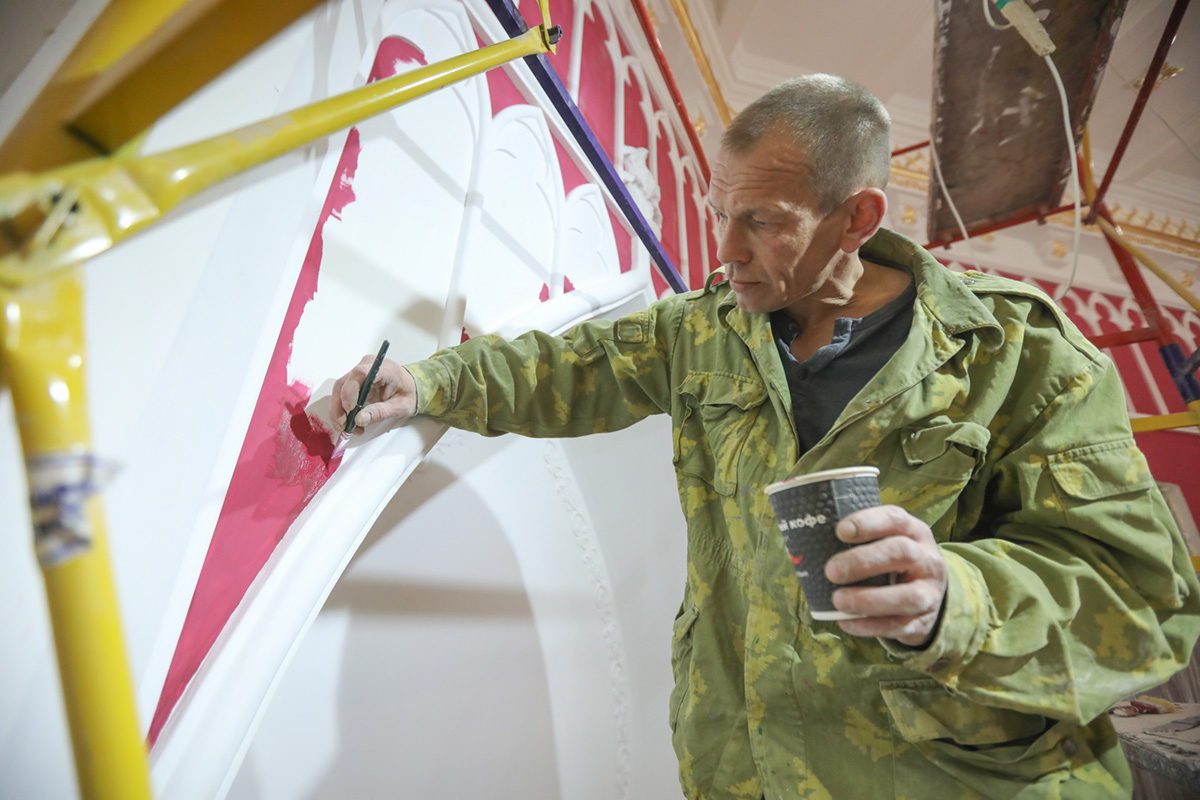 Interior work and decoration is a long and expensive process

— How the financing of the restoration work of certain facilities is prioritised?
— Of course, it is not easy to single out higher priorities. All facilities of historical and cultural heritage are important for us. The Ministry of Culture always pays special attention to them. Our task is to preserve them, stop their destruction, restore and adapt.
Still, there are priority facilities. As a rule, they are symbolic, have nationwide, state significance for Belarus.
We also do not forget about the rest. Considerable funds are annually allocated for major and current repairs, as well as for strengthening the material and technical base of cultural institutions within the framework of the ‘Culture of Belarus’ State Programme, which is settled until 2025.
— The Kossovo Castle and park ensemble will be completely finished this year, but what about the next year?
— In 2023, the commissioning of several landmark facilities is planned. This includes the complex of the former Jesuit Collegium in the village of Yurovichi, the Corpus Christi Church in Nesvizh, and palace and park ensemble in the village of Zhilichi, Kirov District.
— There are 1804 monuments of architecture in our country. How many of them have been restored in the entire history of sovereign Belarus?
— It is difficult to give an exact number. These are hundreds of facilities that have been restored, reconstructed and adapted for other functions.
If we talk about the most iconic, then these are, of course, the Mir and Nesvizh castle complexes, the Kamenets Tower, the Rumyantsev-Paskevich Palace and park complex in Gomel. An archaeological complex was created on the basis of ancient Turov. The city halls in Mogilev, Chechersk, Minsk have been restored, the Upper Town historical centre of Minsk, the Trinity Suburb has been recreated. The estate-museum of Pyotr Bagration, the Krasny Bereg estate in the Zhlobin District, the Lida Castle and many other facilities have been restored. Our state pays close attention to the restoration and preservation of its historical and cultural heritage. 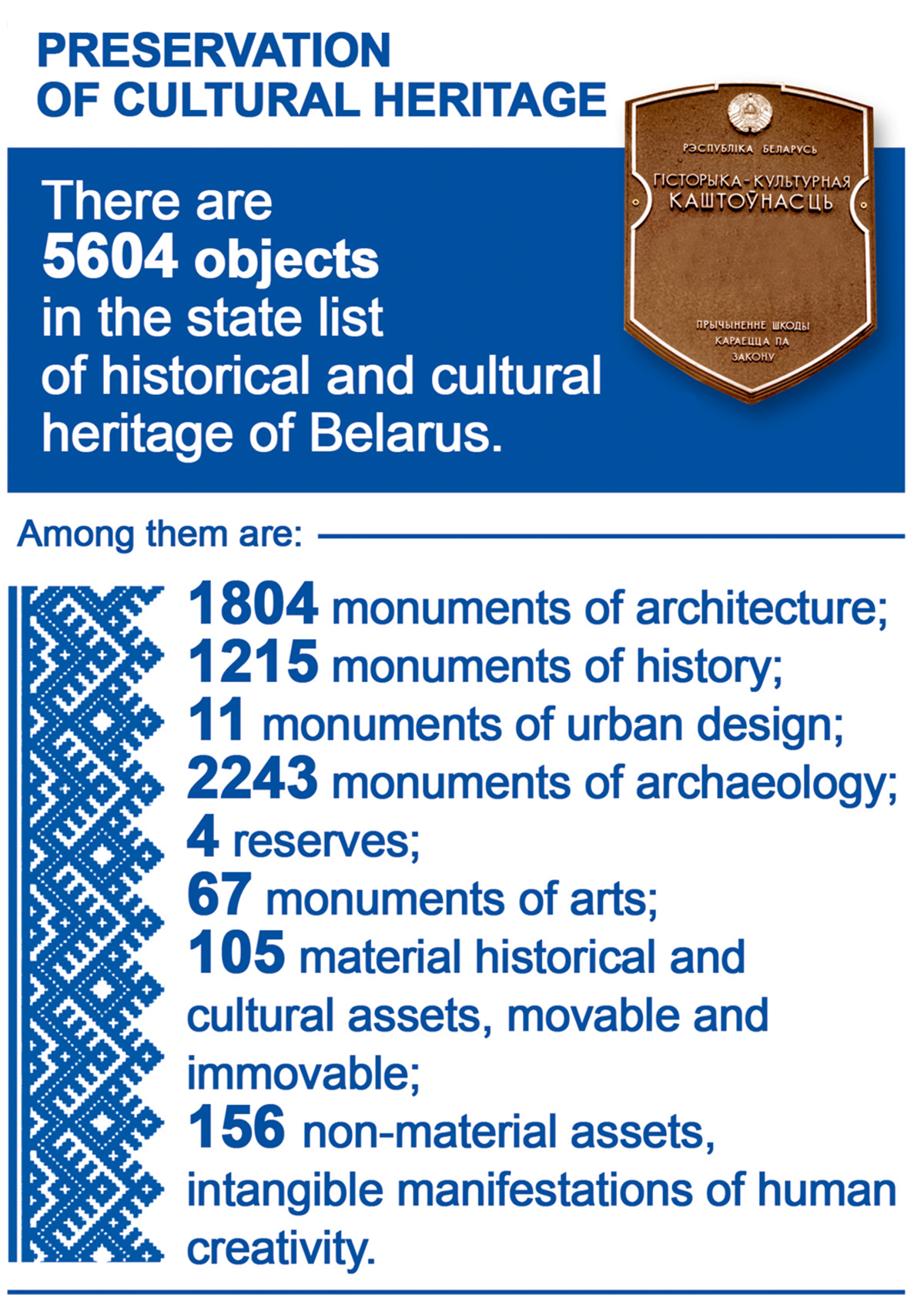