From Batleika to Bolshoi: the history and traditions of the Belarusian theatre in old photographs

Probably, it is not really fair to unconditionally agree with the statement that the theatre begins with a hanger. For some, it begins with the repertoire, for others — with the stars entering the stage, and for others, like a book — from the cover or, if you like, the facade. For someone it is emphatically ascetic, for someone it is openwork, sometimes even pretentious, and for someone it is epic-monumental, like the appearance of the heroes of antiquity. After all, you see, looking at the building of the Bolshoi Theatre of the Republic of Belarus or Yanka Kupala Theatre, there is an irresistible desire to get inside at any cost. Well, there is already the hanger at hand, that is, the wardrobe... 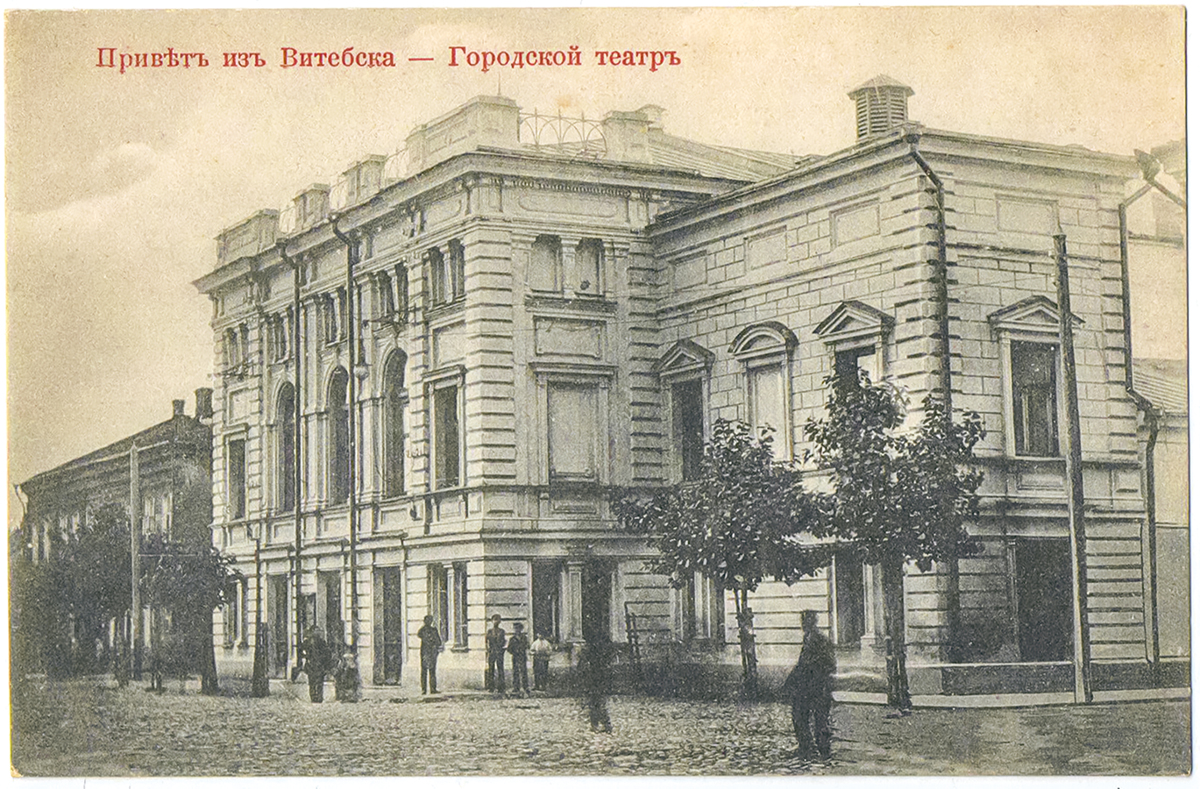 Vitebsk. City theatre. The beginning of the twentieth century.

The Belarusian theatrical art has a rich history and splendid traditions. The initial and quite successful attempts to create a theatre in Belarus were already in the time of the Grand Duchy of Lithuania — school theatres arose at collegiums and seminaries, the first of them was organised in Polotsk. At the same time, the Batleika folk puppet theatre arose and became hugely popular.
The influential Belarusian nobility began to create their own theatres in the middle of the 18th century. Their stage halls, erected, as a rule, by Italian architects, existed in the estates of the Tyshkevichs in Pleshchenitsy and Svisloch, Khreptovich — in Shchorsy, Prince Lubomirski — in Dubrovno, Count Chernyshev — in Chechersk and Mogilev. The most famous theatre project of that time was carried out by Mikhail Kazimir Radziwill, whose wife Franziska was not only an ardent admirer of theatrical art, but also personally wrote 16 comedies, tragedies and opera librettos for the theatre. Unfortunately, Radziwill’s theatres in Nesvizh and Slutsk existed for a relatively short time: just over ten years. The next bright milestone in the Belarusian theatrical history was the temples of Melpomene in Grodno (the oldest theatre building in Belarus, which has survived to this day, erected by order of Anthony Tizengauz) and Slonim.

Pinsk. Casino cinema. The beginning of the twentieth century.

Built in 1788 with the courtesy of Mikhail Kazimir Oginsky, the Opernhaus two-story building, which accommodated about 2,000 people, became a real gem of the city, theatregoers from many European cities came to admire it and attend amazing performances.
It is impossible to ignore one of the most famous theatres that existed in the 18th century on Belarusian land — the Shklov theatre of count Semyon Zorich, the performances in which, according to eyewitnesses, were not inferior, and sometimes even surpassed the best court theatres in the luxury of productions and scenery.
In the 19th century, theatre life began to gradually change direction: city theatres began to appear on the basis of private enterprises — almost all large Belarusian cities acquired them. 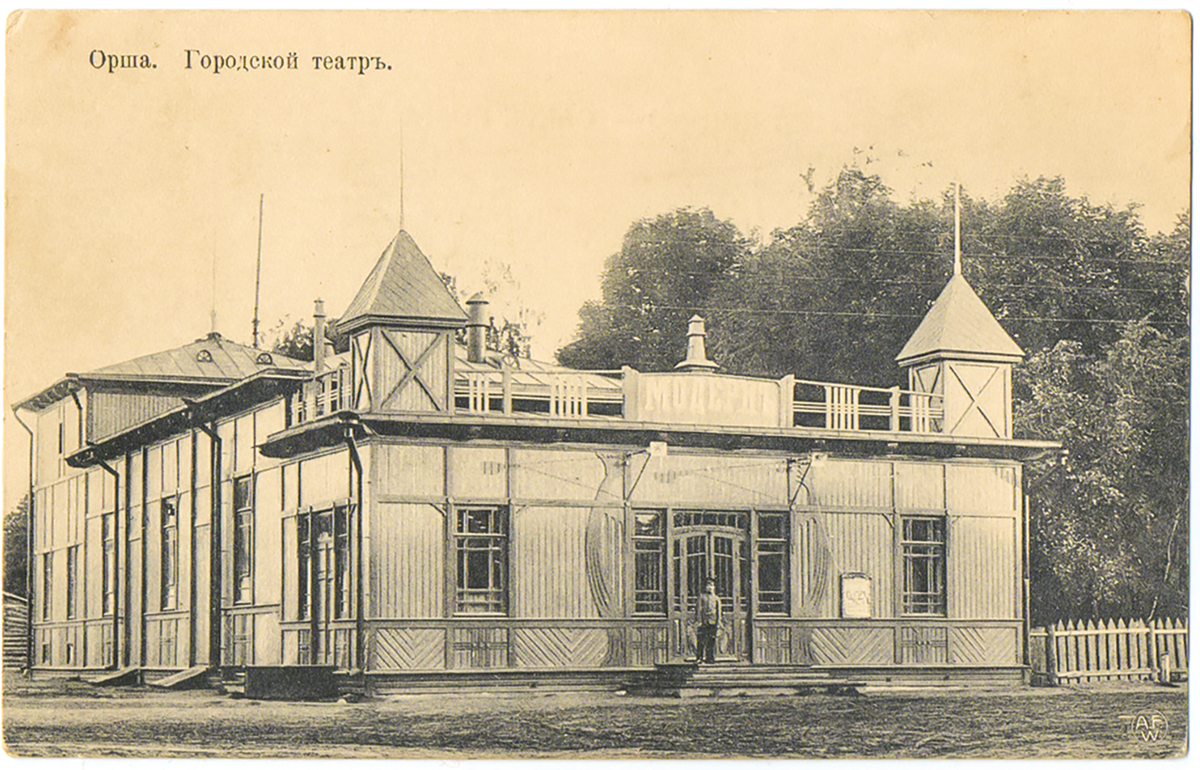 Orsha. City theatre. The beginning of the twentieth century.

In 1845, the first permanent professional theatre was opened in Vitebsk in an old residential building on Castle Hill, which was later rebuilt into a theatre by architect P. I. Chervinsky. And in 1874, the Rostovtsev Theatre on Smolensk Market Square appeared in the future cultural capital, about which the press wrote the following: ‘A building that can compete with theatres in big cities’.
Mogilev was the next city that acquired its own temple of arts — the building of the city theatre was built according to the project of the architect Kamburov in 1888, which is still one of the main city attractions.
The main theatre stage in Minsk was located in the former house of Solomonov on Cathedral Square at the beginning of the 19th century — it was there that in 1852 the premiere of the Sielanka comic opera by Dunin-Martsinkevich took place. Then the city hall became a haven for theatregoers. And only in 1890, the grand opening of the Minsk City Theatre took place in Aleksandrovsky Garden, in 1920 it was renamed the Belarusian State Theatre, and for modern Minskers it became simply Kupala. 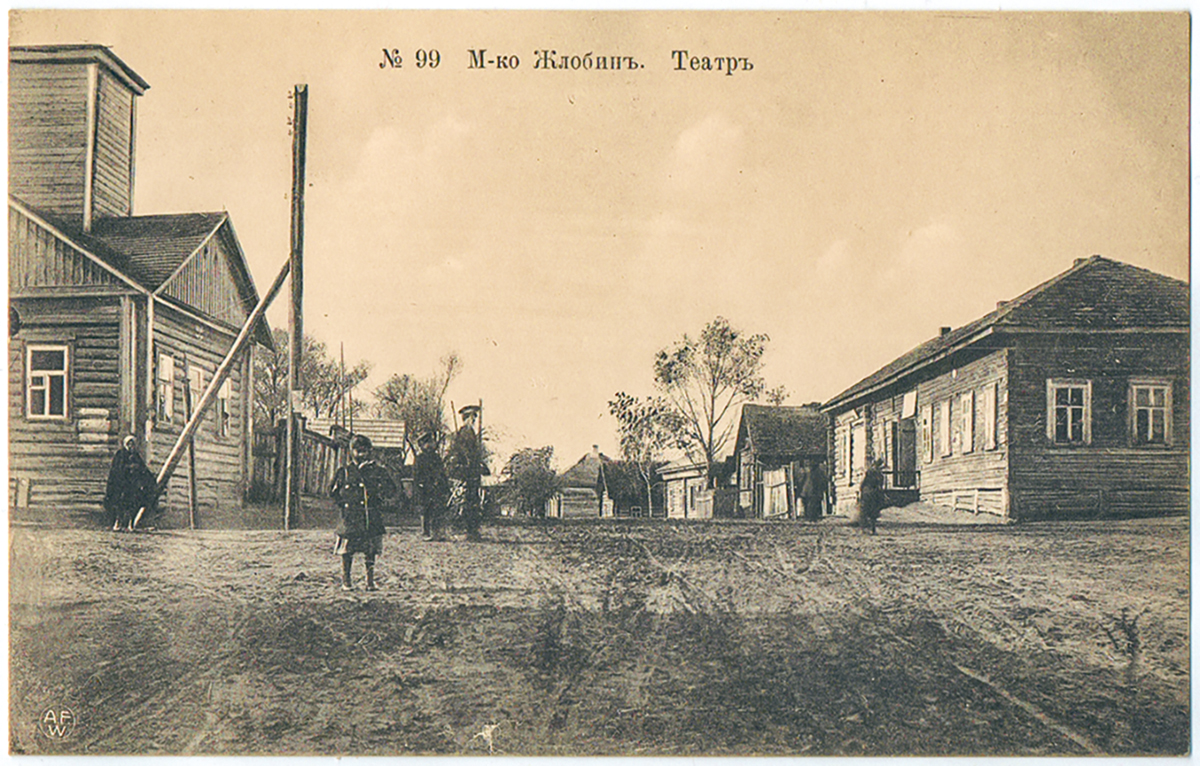 Zhlobin. Theatre. The beginning of the twentieth century.

Theatrical life was also in full swing in small provincial towns. In 1872, when work on the improvement of Orsha began, the city’s English Garden was laid — a place was found in it for a wooden two-story theatre, which bore the pretentious name Modern. At the beginning of the 20th century, there were even two stage venues in Pinsk: the wooden building of the merchant Yankel Boltzmann, built back in the 80s of the previous century, and the Korzhenevsky Theatre, erected in 1901 and, having an auditorium for a 1,000 seats, was considered the largest in provinces. Another architectural landmark of Pinsk, the Casino cinema, which has a 110-year history, now houses the Polessky Drama Theatre.
There used to be a theatre in Rogachev as well. It was built in 1912, had a quite solid hall for 500 seats and was known as a real cultural centre among the local intelligentsia. 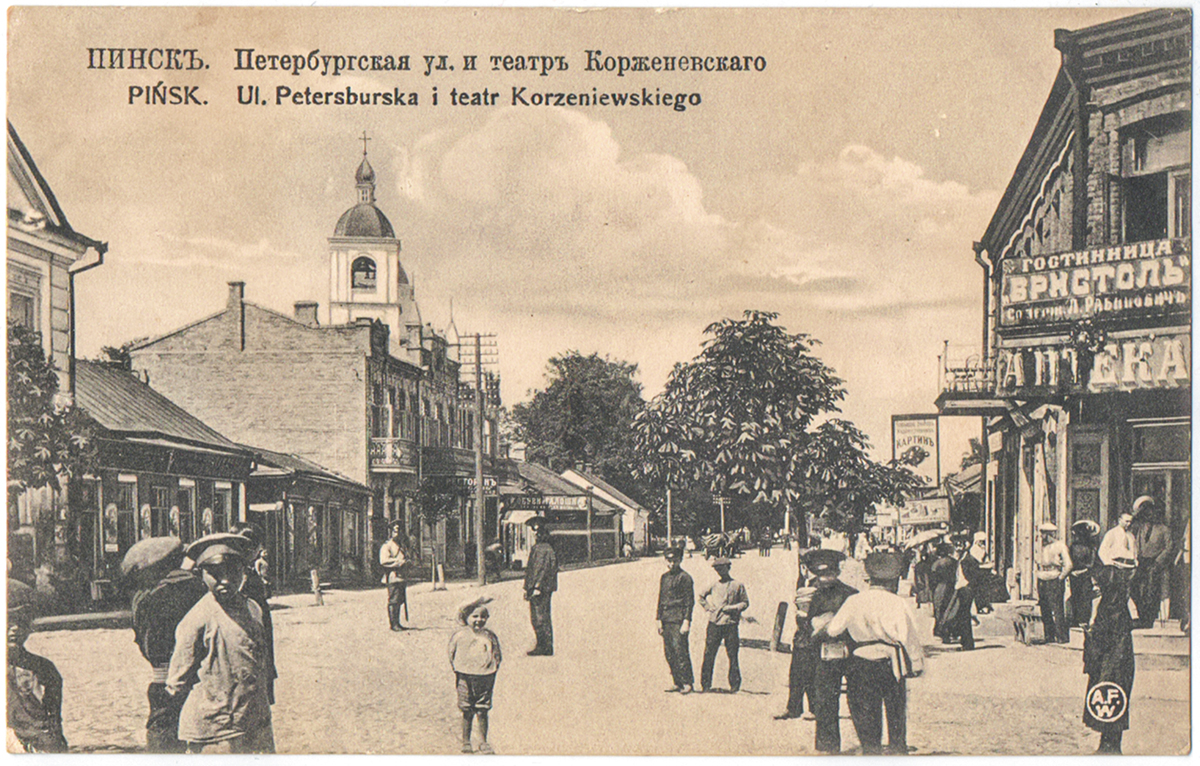 Pinsk. Petersburg street and Korzhenevsky Theatre. The beginning of the twentieth century.

At the beginning of the last century, a small wooden theatre existed in Zhlobin as well, which at that time was far from the large industrial city that we know today, but just a small town.
Most of the professional theatres, of which there are now 28 in Belarus, including the Bolshoi in Minsk, regional drama theatres in Vitebsk, Gomel, Brest, Grodno and many others, were built in the post-revolutionary and post-war periods. However, this is another separate and very large-scale story that cannot be put into a few paragraphs of a newspaper text.

By Vladimir Likhodedov
Photos from the personal collection of the author