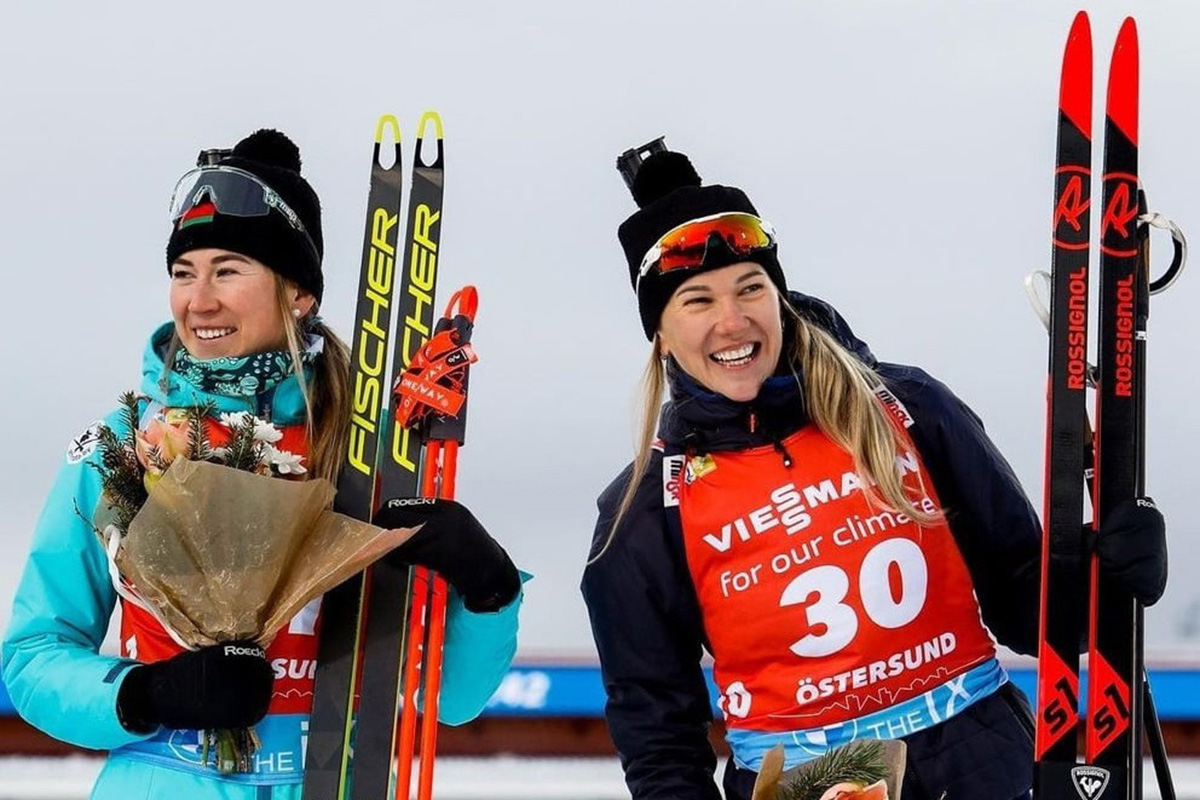 The biathlon season has started, with the first stage of the World Cup finishing in Swedish Östersund. Individual races and sprints, struggle against rivals on the track and shooting range, as well as against one’s own excitement — the premiere stage turned out to be very successful for some of our team’s biathletes.
This especially refers to Dzinara Alimbekava. In the very first individual race of the season, the leader of our women’s squad stopped one step away from the medal podium: despite two missed targets, the biathlete conceded only to Czech Markéta Davidová, Austrian Lisa Teresa Hauser and German Denise Herrmann in the final protocol. At the same time, the lag behind Davidová (who did not make a single shooting mistake, for which one minute is added in the individual race) was 1 minute 46 seconds. It is noteworthy that for many of the last season’s leaders, this race did not work at all: Norwegian Tiril Eckhoff took 30th place with five misses, Italian Dorothea Wierer finished 37th with four errors on the shooting range while the Pyeongchang Olympic champion in this discipline — Hanna Öberg — finished only 74th with seven misses. Alas, the first race for the rest of the Belarusian women was also not quite as successful. Hanna Sola, who spent a lot of time fixing shooting problems in the offseason, was placed 35th with four misses. Our other girls were placed even lower in the final protocol.
However, the next women’s race — the sprint — brought more positive news, with two Belarusians getting into the flower ceremony at once: Dzinara Alimbekava, who again came fourth, and Hanna Sola, who took fifth place. Hanna Öberg celebrated victory in the sprint, followed by Anaïs Chevalier-Bouchet of France and Marte Olsbu Røiseland of Norway.
After two stages, Dzinara Alimbekava is placed second in the World Cup overall standings, gaining the same number of points as Markéta Davidová, while Hanna Sola is in 13th position — a great start!
Men have more modest success. In both races the best among our guys was Anton Smolski, who finished 19th twice. After the races, the biathlete wrote on Instagram: ‘The condition is excellent, the skis are fast, the shooting is nervous’. In fact, none of the guys have managed to cope with the shooting so far. Smolski missed three times in the individual race and twice in the sprint. Dzmitry Lazouski, who scored his first World Cup points, was the most accurate of our athletes in the 20km race with two misses but made three mistakes in the sprint. Most of all, alas, Raman Yaliotnau missed: in the individual race with four firing lines he missed seven targets, in the sprint — three. Therefore, the biathlete will spend the next stage in the IBU Cup while at the World Cup he will be replaced by Mikita Labastau, who started last week in Idre, where he finished 17th in the sprint and 12th in the pursuit.
The World Cup continues, with the second stage taking place on December 2nd-5th in Östersund. Its programme includes sprints, pursuit and relay races.