Minsk will do everything possible to solve the refugee problems. Western politicians should come to their senses.  The confrontation in the centre of Europe is beneficial only to the United States. What other topics were tackled by the President during his visit to the refugee camp in the transport and logistics centre near the Bruzgi border crossing. 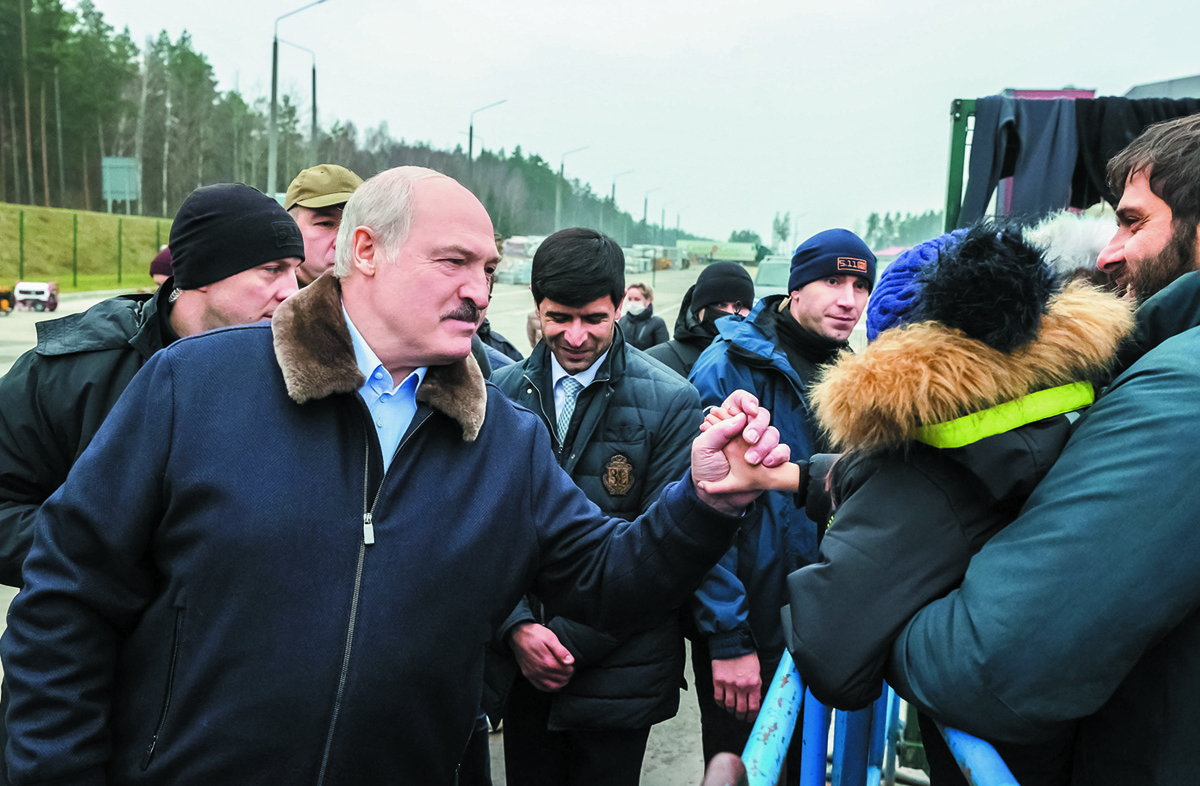 These people became guests of Belarus against their will. Well-fed Europe, under the strict leadership of the United States, destroyed their homes and their usual way of life, then called them to Europe, but deceived them. The refugees who have found themselves in Belarus today face a dilemma: what to do next? In a conversation with refugees, Aleksandr Lukashenko stressed, “Anyone who wants to go home, we will help them do it. But we will not force them. It is your right. Anyone who wants to move westward is also your right. We will not catch, beat or hold you behind barbed wire. If you want to leave, we will help you. If you don’t want to, well ... we will do everything to save your lives and especially your children and wives.”


The Head of State examined the food distribution point very carefully and asked if there was enough food for everyone. Inside the centre, the President paid attention to fire safety issues and, of course, got acquainted with the conditions for accommodating people on the spot.
The migrants greeted the leader of Belarus with applause.
“Do you have enough space for accommodation in the centre? Do you need more?” the President immediately asked the people.
“In general, everything is fine,” they assured him.


Politics shouldn’t be made out of human fates

Refugees, of course, are not to be envied. Behind them there is chaos, devastation and war at home. Ahead of them is still an insurmountable wall, cold-bloodedly erected by the hand of the Polish authorities. They do not want to stay in Belarus. Their ultimate goal is Germany, where their relatives and friends have already settled some time ago. People go to reunite with their family members. The President encouraged them saying,

“We are all humans. There can be difficulties and there can be troubles. But I am sure that we will overcome these problems together... The truth is that we are in no way going to toy with and make politics out of your fates.”

Aleksandr Lukashenko called on the Polish side to let refugees into Germany, “I am addressing the people of Poland not because there is no government there. It’s just that the authorities in Poland have gone insane, they have lost touch with reality.

Dear Poles, bring your politicians back to their senses! You certainly understand that they want to solve their domestic and external problems at the expense of these disadvantaged people.”

The Head of State drew attention to the fact that Warsaw expects to bargain billions of Euros from the European Union, which blocked this assistance because of disagreements with the country. In addition, the Polish leadership, using the situation on the border, is trying to distract its citizens from internal problems. The President reminded them, “The Poles are not happy with the ruling coalition and they are becoming increasingly vocal about it. In order to divert the public attention from these issues, they [the Polish authorities] unleashed this mayhem at the border. Therefore, I ask the Poles once again, I persistently ask: we do not need any clashes, let alone wars, let these people through to Germany. After all, neither Belarus nor Poland is their final destination.” 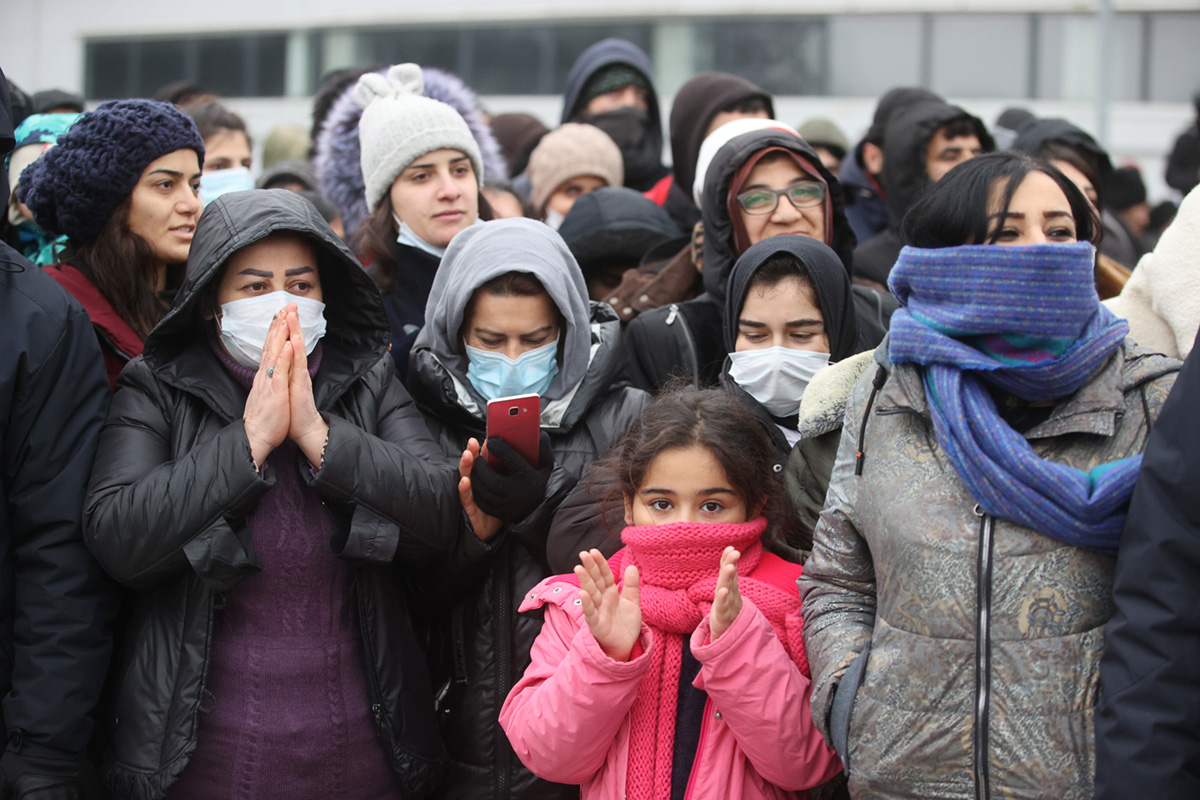 Aleksandr Lukashenko also called on the people of Germany to shelter refugees from the Belarusian-Polish border,

“I want to appeal to the people of Germany. Here, most of the people want to reunite with their families, find their loved ones who are in Germany.

Please take these people to your place. This is a small burden, they want to live in Germany. Two thousand people is not a big problem for Germany. And Chancellor Merkel agreed with this, but the Poles are blocking it.”


We will help as much as possible

Aleksandr Lukashenko noted earlier that our country — unlike the West — will do everything possible to somehow help refugees. The refugees greeted this promise with warm applause. The President stressed,

“We will persistently ask the western states to help you. This is not only a human problem, I look further: if we do not solve the refugee problem in Belarus now, it will be much more powerful not only in spring, but also in winter. We understand that a huge number of refugees will rush here, and it will be impossible to contain them at the border.”

Concluding his visit to the Bruzgi transport and logistics centre, the President talked to the media. There was no shortage of questions. Merkel will soon be replaced by a new chancellor — Social Democrat Olaf Scholz. Therefore, the journalists did not fail to ask the Belarusian President if he expects a common language with the new leadership of Germany. The answer was,

“We do not count on anything, but we act like normal people, civilised neighbours. We do not want any war, any confrontation here, in the centre of Europe. If they stick to the same policy, they are welcome, we will meet and embark on talks tomorrow. If they want confrontation, I think they will only lose.”

In a conversation with Aleksandr Lukashenko, the media representatives touched upon the statements made in Poland about the blocking of air routes for the delivery of refugees. Such a policy by the European Union will not work, as refugees will look for other ways, including walking routes. Here is what the Head of State thinks about this,

“For Russia, and for us, and even for Ukraine, it will be a problem if they go by land. It will be a disaster. And it is not clear who will walk in these crowds. After all, it is impossible to carry weapons and explosives on an airplane, it’s all controlled. And all this will not be under control. These thoughtless scoundrels [in the West] do not understand what they are doing. If it happens in Belarus and Russia, things will turn nasty, we will be forced to defend ourselves, and we will use any methods.”

Aleksandr Lukashenko noted that today it has already been proven how refugees get to Belarus and further to the EU, “There is a large travel company, headed by Kurds, and they promoted this route. Why? Because on this route billions of US Dollars are earned. There they are loaded onto airplanes, transported to Minsk, where taxi drivers and motorists take them to the border. They cross the border; it costs 3,000-5,000 Euros in Poland to take them to Germany. It’s already been revealed.”

Reporters also inquired about the opinion of the Head of State as to why some representatives of the West, international organisations do not make contact with journalists.
“They come here in order to blurt out three words to you and strut around and promote themselves,” replied Aleksandr Lukashenko. “Keep in mind their monthly salary equals to what we all, including me, are paid every month. What kind of conversations and negotiations can we have with them? They are empty people.

Those, who pay their salaries — mainly Americans, Europeans and the rest — call the shots.”

‘We will never forget this’

A young girl from Iraq addressed the Head of State, “Mr. President, first of all, I would like to thank you for everything that you are doing for us. It is very important for us.

If all presidents in Europe were like you, there would be no problems at all. We would be received cordially everywhere.

It is extremely important for us to get to Europe and start a new life simply because we cannot go back to Iraq. This is a big problem for us... We hope that Germany will finally open its borders for us, and the Poles will let us through and receive us with a warm heart. Like Belarus. Like you do! We really hope that Europe will do something good for us, like Mr. Lukashenko! We will never forget this! I say all these kind words on behalf of everyone who has gathered here today, from all children, from all who have suffered, who have injuries. I am grateful to you for giving us shelter and providing us with food.”