This area is rich in lakes and swamps. It is no coincidence that the town of Glubokoye got its name from the name of the lake. And the village of Mosar, located not far from the distict centre, means ‘swamp’ in Finno-Ugric. By the way, one of the largest swamps in Europe, Yelnya, which is more than 9 thousand years old, is located in the Vitebsk Region! 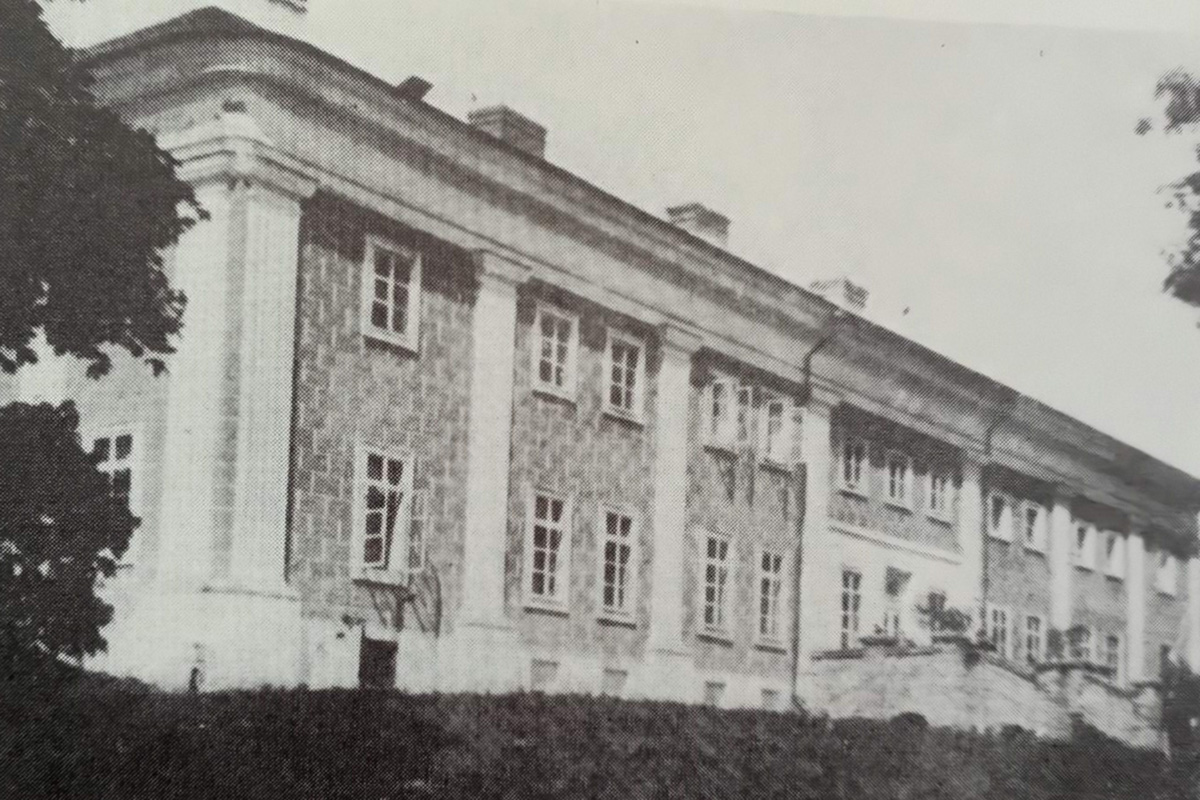 But let’s return to Mosar, which for 507 years (!!!) of its existence has turned from a ‘swamp’ into a Belarusian Versailles. This is proved not only by the Belarusians spoiled by the splendour of their native nature, but also by numerous tourists, including those from Europe. The town passed as a dowry for brides from one gentry family to another. Mosar was owned by the Vilna zemstvo clerk, the hunter of the Grand Duchy of Lithuania, the Samogitia colonel, and the Trakai castellan. History tells us that in the 16th century, during the Livonian War, Stefan Batory stayed for the night in Mosar.
However, the greatest trace in the history of the village was left by the Brzostowski family, who ruled Mosar for almost 200 years. It was by order of Robert and Anna Brzostowski in 1775-1779 that a two-story palace designed by Italian architects was founded on the estate. A year later, the St. Anne’s Church was erected, which has survived to this day. Surprisingly, the church did not cease to function even during the Great Patriotic War. In its entire long history, it has never been closed.


In the maelstrom of dark times 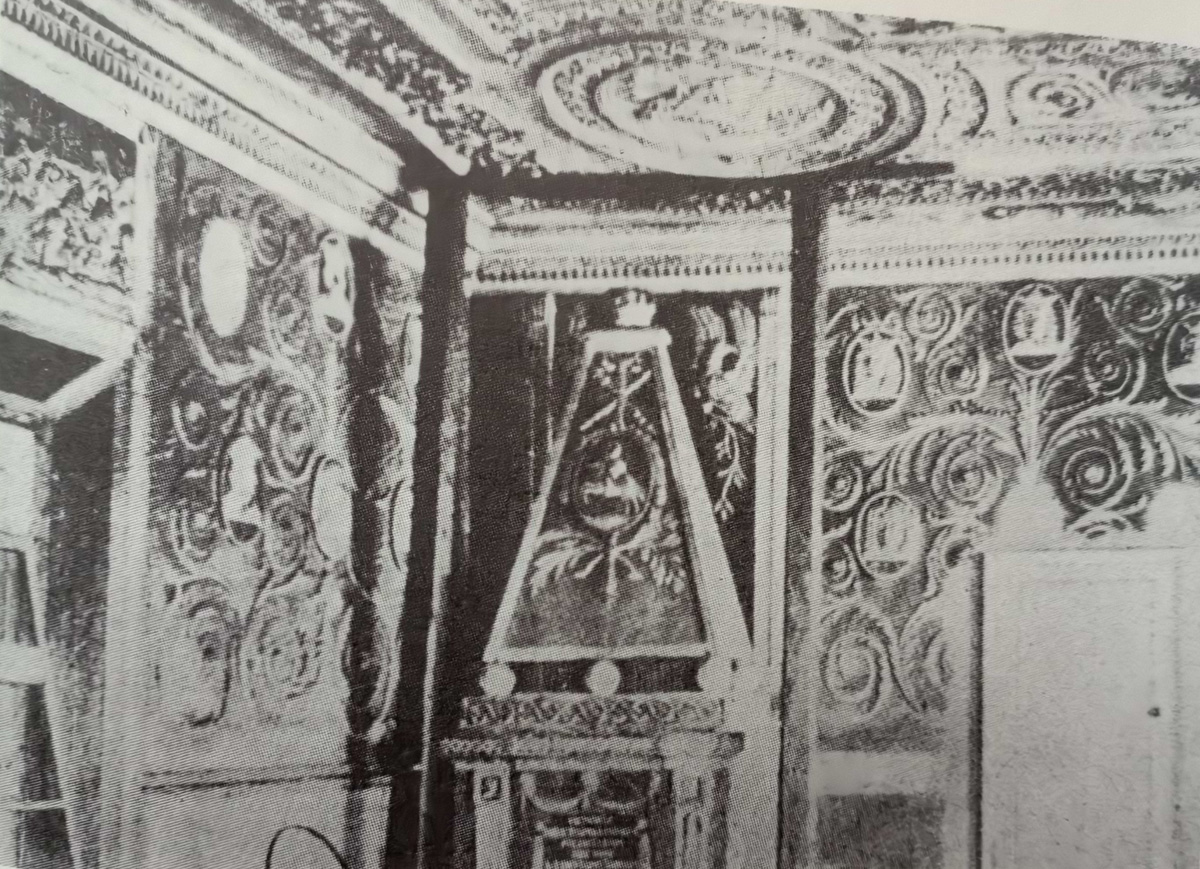 Mosar. Fireplace in the Royal Hall of the palace. 1914
It can be assumed that Mosar is also called the Belarusian Versailles because the palace here was built a little more than 10 years after the Petit Trianon, one of the Versailles palaces. They even look similar: both are made in the style of elegant classicism. However, there is one significant BUT. The French palace withstood the maelstrom of historical events, while the Belarusian, alas, could not survive the post-revolutionary dark times: on November 24th, 1918, the palace burned down. The fire destroyed all floors, decorations, fireplaces, parquet ... Aleksandr Khainovsky, a senior researcher at the Glubokoye Historical and Ethnographic Museum, says:
“Nothing remains of the once magnificent palace: no ruins, no foundation. Where it stood for almost 140 years, now there is the Mosar Flax Factory. The homestead buildings of the flax mill were used as warehouses for some time. The ruins were completely destroyed even before the start of the Great Patriotic War. When, after the signing of the Peace of Riga, Mosar became part of Poland, the building still existed, but partially: there were dilapidated walls, the roof was missing, the internal partitions were dismantled, furniture and interior elements were looted ...”
All that can now refer us to those times is the St. Anne’s Church and two oak trees near it, planted, as the legend says, at the time of laying the foundation. The giants continue to delight residents and tourists alike. The only material rarity of the former greatness was a miraculously preserved embedded tablet, informing that Stefan Batory stayed in the palace when he went to the Livonian War.
In addition, fortunately, rare photographs of the palace facade and interior rooms have survived to this day. The photographer captured the luxurious decoration, which was in no way inferior to the palaces of Versailles. Even black and white images are able to convey all the grandeur and splendor of those times. 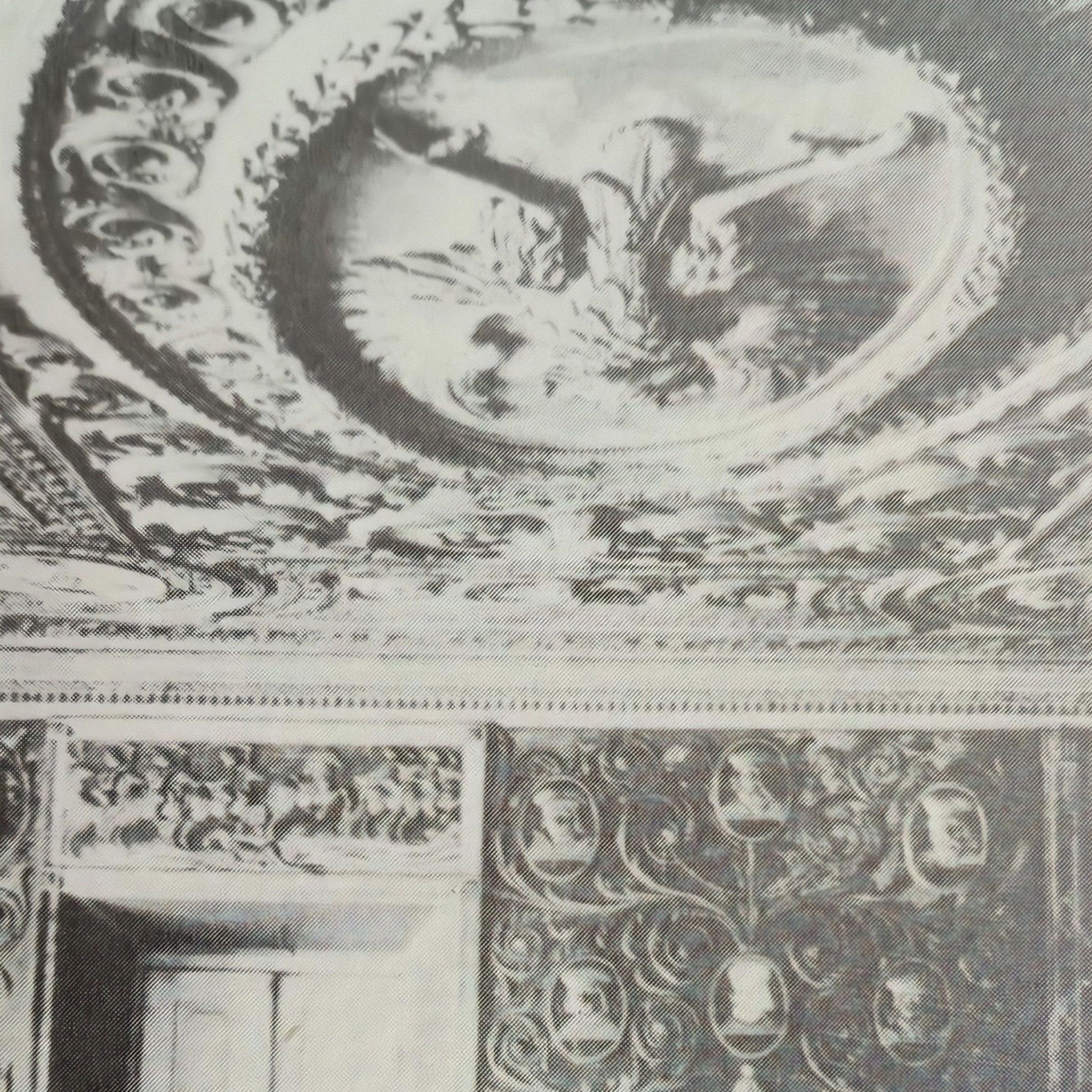 Fragment of the Royal Hall. 1914
Note: despite the fact that the facade of the building was distinguished by classical modesty, the internal decoration was striking in splendour. The royal hall was decorated with a stylised family tree. Winter heating of these rooms was carried out by means of a huge stove, decorated in the form of a pyramid and a French fireplace with a bust of King Stanislaw
August. In addition to the Royal Hall, the palace housed the Ballroom with a rich black marble fireplace, which depicted ancient nymphs. The walls of the Hall of Mirrors were lined with mirrored panels. The fashionable trend of that time was the Chinese Room, where Confucius sat in the pose of a Buddhist monk, surrounded by his disciples. The guests were attracted by the philosophical inscription on the plinth of the fireplace: ‘The wise man is the most severe critic for himself. He is himself a prosecutor, a witness and a judge.’
It is noteworthy that Lieutenant General Adam Ignatievich Tsvetsinsky, a hero of the Russian-Turkish War, was born in Mosar in 1826. His son Maximilian, who followed in the military footsteps, also became a general and took part in the First World War. These are the glorious sons of the boggy Mosar land.
In 1939, after the liberation campaign of the Red Army, Mosar was returned to its country. 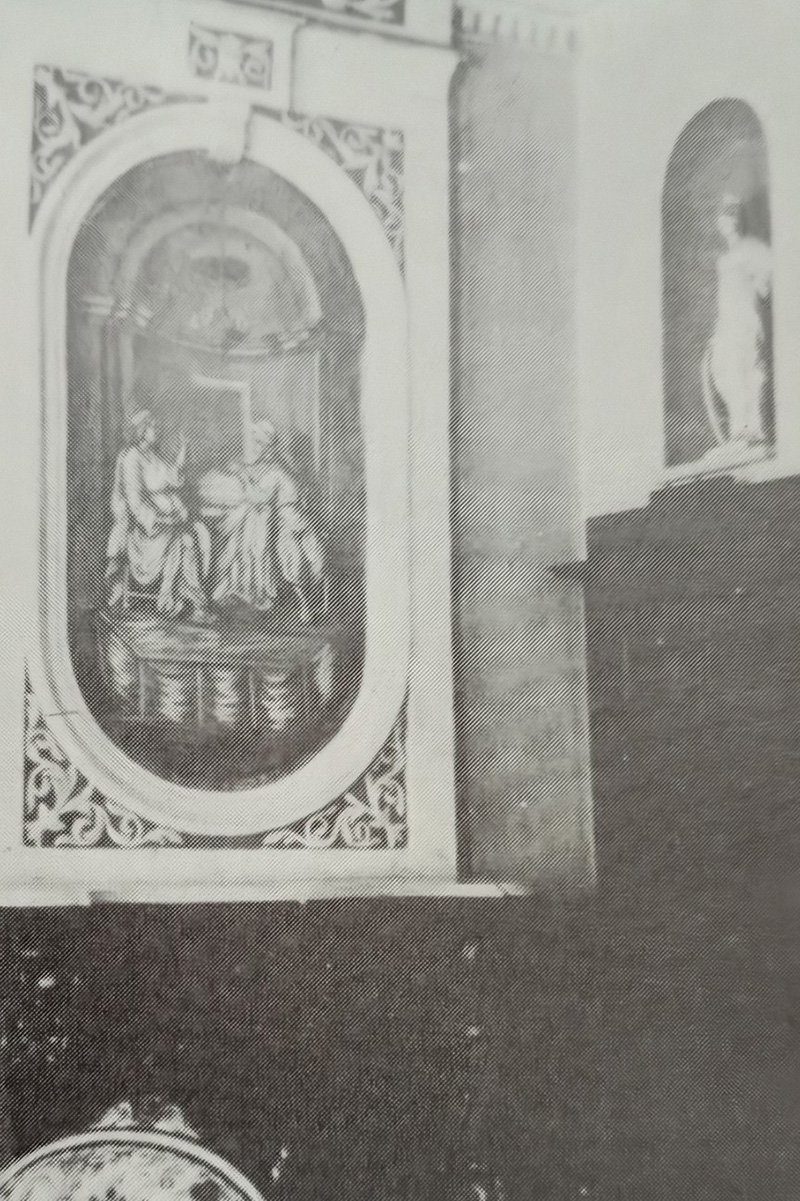 Hall with fireplace and stained glass. 1914
Modern Mosar is part of the Glubokoye District of the Vitebsk Region. About 500 people live here. In summer, there are up to a thousand tourists a day. People are attracted here not only by the St. Anne’s Church, but also by the magnificent cultural and dendrological complex with many sculptures and architectural monuments. A Catholic cross, the highest in Belarus, rises 23 metres above all this into the sky. It is visible from a distance of 25 kilometres.
The cemetery is also notable in Mosar. It is unique in that both Catholics and Orthodox are buried here. There is no division into denominations. And this is an excellent example of the unity not only of those who are no longer with us, but also of those who are now living. In the central part of the cemetery, there is a five-metre white statue of Christ the Saviour.
In addition, famous springs flow in Mosar, the water of which contains useful minerals and is considered healing.
You can talk endlessly about the village, but it is better, as you know, to see once for yourself. And feel the atmosphere of this amazing corner of Belarus with every cell of your body. 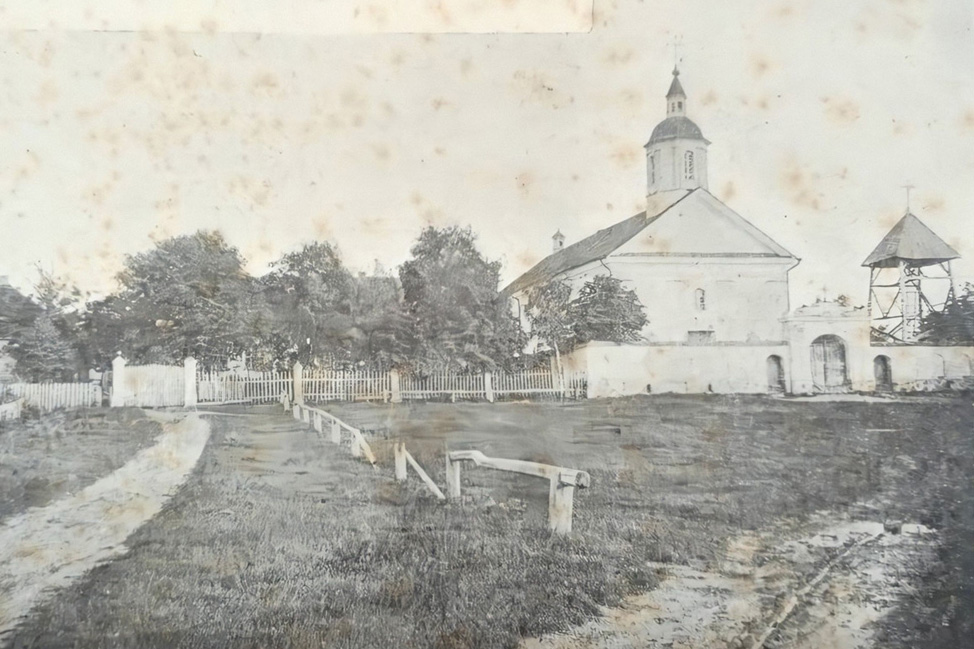 The distance from the capital to Mosar is 180 kilometres. You must go along the M-3 highway to Begoml and then turn onto the P-3 road to Glubokoye. From there it is 18 kilometres to Mosar, and any local will show you the right path.