Belarusians celebrated Independence Day on a large scale. The President delivered a keynote speech at a solemn meeting in the Palace of the Republic on the eve of the main state holiday. It is symbolic that Aleksandr Lukashenko’s address to his compatriots was performed in two state languages. On the morning of July 3rd, the President laid a wreath at the Mound of Glory memorial complex and talked to the youth, participants of the joint Belarusian-Russian patriotic youth project Memory Train. In the evening, the Belarusian leader presented orders, medals and honorary title badges to cultural workers. 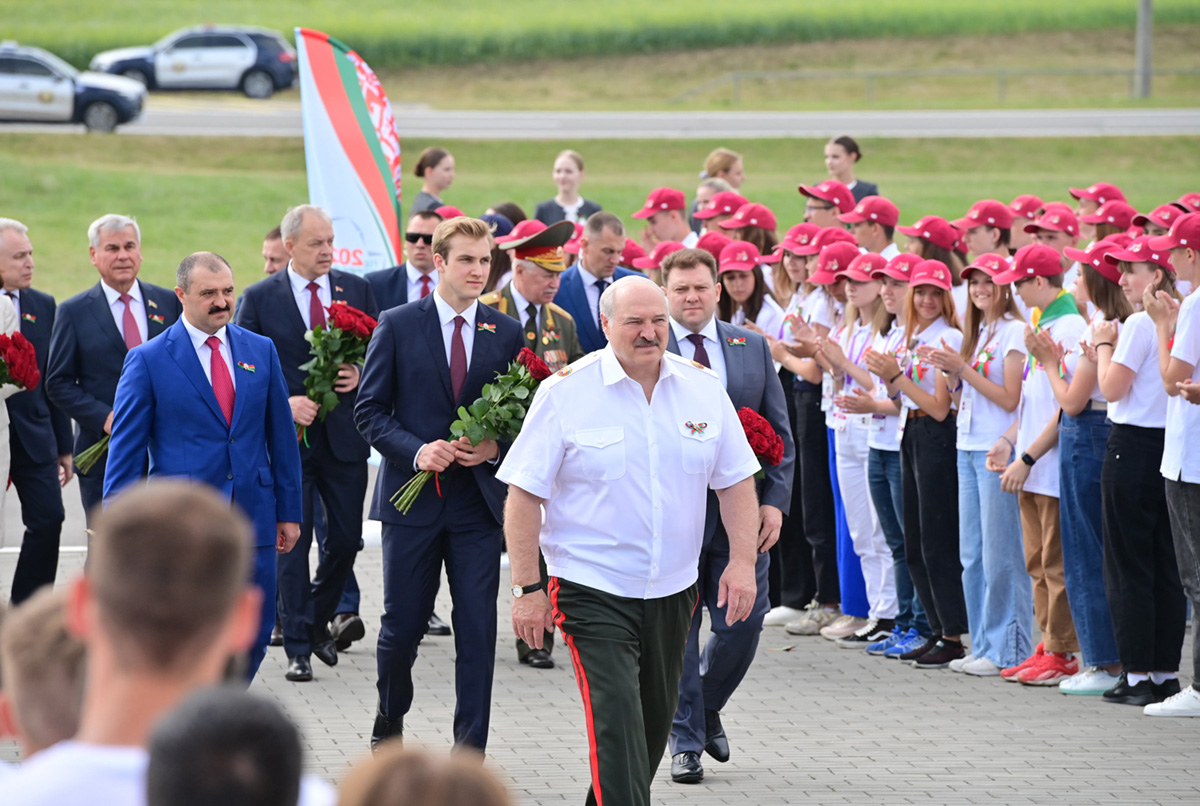 As Aleksandr Lukashenko stressed at the solemn meeting, the Belarusian people carefully treat the historical memory of each era.
“July 3rd, a sacred date for the Belarusians, is a national symbol of the people’s unity and victory in the fight for their freedom. In ancient times the Belarusian people had many names: Krivichi, Dregovichi, Radimichi, but they were united by one faith — the faith in truth and justice; one aspiration to cherish traditions and protect their homes and families; one love for the Motherland, the land where Belarusians were born and became a nation. We carefully treat the historical memory of each era, the events of which forged the spiritual basis of the nation, tempered the will and character of the Belarusians,” said the President.
In general, there are many glorious pages in the history of the Belarusian people, and the Head of State made a special emphasis on this, “The names of our compatriots who were born in this holy land — Rogneda, Vseslav the Sorcerer, Euphrosyne of Polotsk, Francysk Skaryna and Simeon of Polotsk — have been forever inscribed in the history of the East Slavic Middle Ages. It is important for us to remember that the Belarusian ethnos was the backbone of the Grand Duchy of Lithuania, a unique state association for its time. It was the defensive alliance with the Baltic tribes, where the Slavs taught them how to read, introduced them to the philosophy of Christianity.”
According to Aleksandr Lukashenko, while the countries that the Soviet army liberated from fascism are destroying the graves of our grandfathers and great-grandfathers, we will be building a new Belarus, examining the archives and restoring the story of every soldier, every innocent civilian victim.
The President emphasised,

“These are very painful memories for us. Until now, they have been our quiet sorrowful memory. Now they will become an alarm bell. Whether the West wants it to or not, will show the world the truth about all the atrocities committed by the Nazis. They will have to listen and hear again about the murdered people, the unborn, the children, the women pressing infants to their hearts, the babies who, as the examination shows, were buried alive. We will show the heirs and supporters of the Nazis the evidence of the crimes of their ancestors, so that the whole world understands what will happen to it if modern Nazism grows into fascism.”

The President noted that Belarusians defended not only their own lives in the Great Patriotic War, “It was the war to destroy the Slavic ethnos, culture and entire peoples. Today we often say that this war is not over yet. It is not over because we still have not reburied the last soldier who died and the last civilian who was brutally murdered in that war. It is not over yet because not everyone who was involved in the monstrous facts of that war, the genocide of the Belarusian people, has been punished. That war is not over yet because once again, as at the frontline, we are defending our historical memory.”
Aleksandr Lukashenko urged to face the truth: the new Nazism is no longer just rearing its head, it has become as real as ever,

“We see it in the geopolitical appetites of our western neighbours, who are greedily eyeing the border territories of Belarus and Ukraine. They even talk openly about possible annexation... We were delicately silent. In our Slavic way we believed that children were not responsible for their parents. We still think so. But the time has come for the forgetful Europe to give itself a moral cleansing. Let them look and draw conclusions. We, while reminding them, will remember that freedom for us is a synonym for the word ‘to live’. “

The President is convinced that the United States and the West failed to unite the world against Russia and Belarus, so new provocations will follow. At the same time, the West and Ukraine are still trying to drag Belarus and Russia into the war in Ukraine.
“The goal is to get rid of both Russia and Belarus at one fling,” said Aleksandr Lukashenko. 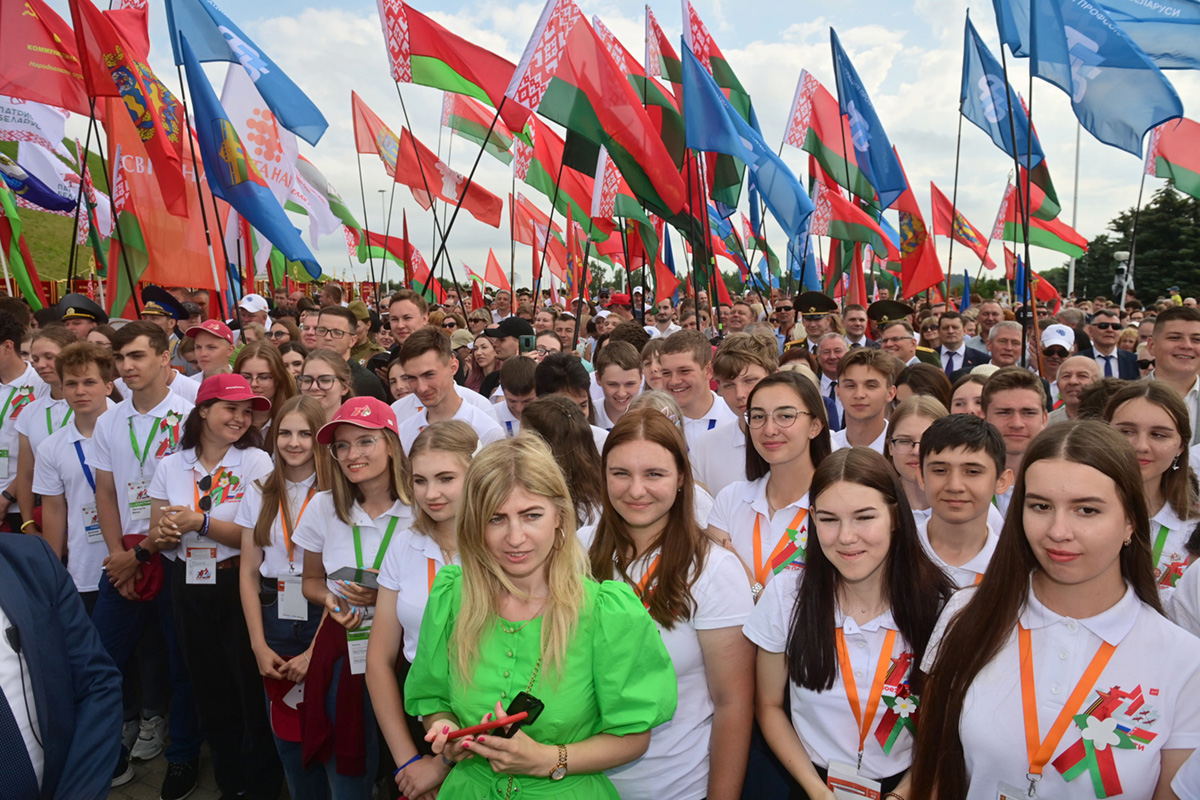 They in Ukraine are allegedly concerned that Belarusian troops could invade them through the northern border, “Don’t believe them! They would be happy if we went in. Furthermore, they want it because they have orders from outside, and they do not care about the deaths of civilians. Ukrainian politicians and the president follow the one and only policy: the more Ukrainians die, the more he will shout to the world about the atrocities of ‘fascists from Russia and Belarus’. I repeat once again what I told you a year or more ago: we will not go to war with Ukraine. We do not need this war. We are being provoked. I must report to you: three days ago, maybe a little more, they attempted to strike at military facilities on the territory of Belarus from the territory of Ukraine. The Pantsir anti-aircraft systems intercepted all the missiles that were launched by the Armed Forces of Ukraine What is it? I swear to you: not a single soldier of Belarus is fighting on the territory of Ukraine.”
Answering the question of those who are worried about ‘whether Lukashenko will fight or not’, the Head of State stressed,

“We will fight only in one case: if one cross the last metre of our land and invade our country. If you kill our people. We will answer! Therefore, as President, I will say: hands off my state, hands off my Belarusian people, if you still have a sense of self-preservation... We are military people, and we know what to do. I would like to warn the hardliners and I tell you frankly that a little less than a month ago I gave an order to the Armed Forces to target decision-making centres in your capitals with all the ensuing consequences.

If only you dare to strike, as they are planning, at Gomel in the south, or Mozyr oil refinery, the airport, the airfield in Luninets or Brest, the response will be immediate. In one second! We have something to answer with…  I’m not going to look at who’s sitting there in offices or palaces. We will respond decisively!”

Do our best to hold out and win!

On the morning of July 3rd, thousands of people gathered on the majestic Mound of Glory — the legendary place where during the Bagration operation the defeat of a large group of Nazi troops began in July 1944. On this day, Aleksandr Lukashenko laid a wreath together with his sons and warmly addressed his compatriots.
According to the Head of State, the time has come for young people to take over from the older generations and keep the memory of the past days, “Our detractors have long been living with the idea of erasing the memory of the Great Victory. Having crossed all moral lines, they have already come to deny Khatyn, Babi Yar and the siege of Leningrad today. They are ready to forget the tragedy of their peoples, to erase the memory of Buchenwald, Auschwitz, and Majdanek. What can we do to counter that? We tell the truth, the harsh and cruel truth of history.”
Participants of the Belarusian-Russian the patriotic youth project Memory Train were also present at the Mound of Glory that day. During a conversation with them, Aleksandr Lukashenko noted that he had already determined the attitude of Belarus to the special operation in Ukraine a long time ago, “On the first day of the operation, I said: we will not allow anyone to shoot Russia in the back. We are holding the fort from the Brest Fortress to the southern borders and have Russia’s back against NATO troops. They can’t forgive us for this. However, it turned out to be the most important direction for us today. You know about the decisions of NATO to increase the number of troops in Eastern Europe by 10 times. Why do it in peacetime? They are doing it in order to fight. We will do our best to hold out and win, so that this silver-haired mound will always see our unity and understand that we do not betray memory.”