Vilnya has been the capital of Lithuania since the 14th century. Sited on the border with Belarus, it has played a major role in our country’s history and hosted the first publishing of Belarusian books, printed by Frantsisk Skorina in the early 16th century. In the early 20th century, the first Belarusian newspapers were published in the city and the first Belarusian schools opened. In addition, Bronislav Tarashkevich’s Grammar was released there, becoming the foundation of modern Belarusian literary grammar. Vilnya has been a common capital for Belarus and Lithuania, from the 14th-early 20th century. 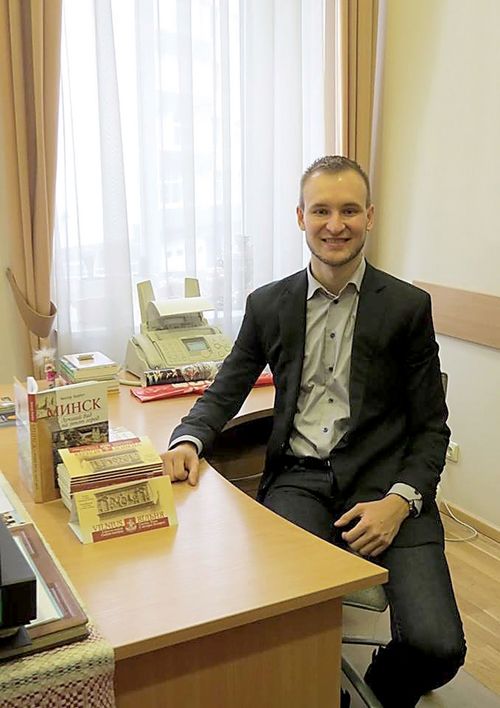 Anton Lutskevich — a resident of Vilnya and a Belarusian public and political figure — came to the conclusion in 1918 that the city was equally valuable to Lithuanians and Belarusians. He asserted that ‘Vilnya must service both nations’ having been ‘a cradle of their culture’. To comprehend the city’s role in our history, in 2013, Belarus Segodnya newspaper launched its educational project entitled Vilnius — Vilnya: The Capital of Lithuania in Belarusian History: Walking Through the City with Victor Korbut. It explores Vilnya’s sites relating to the life and artistry of Belarus-born personalities, in their interaction with outstanding Lithuanian, Polish and Jewish cultural figures in the city. News on the project is available at https://www.facebook.com/KorbutVilnius

As part of the project, Minsk’s Riftour Publishing House has produced a collection of nine postcards, featuring buildings connected with the life and activity of famous Belarusian, Lithuania and Polish cultural figures in this ancient city. Most came from the territory of modern Belarus or hugely contributed to Belarusian cultural life in Vilnya. Prepared by journalist Victor Korbut, these are the first Belarusian language postcards devoted to Vilnya and its sights in the history of Belarus and Lithuania. Using archive documents and scientific literature, the postcards were designed by artist Alena Zhdanovskaya, with support from the Lithuanian Embassy to Belarus, Ambassador Evaldas Ignatavicius, the Return voluntary fund, Pavel Beregovich, Riftour Publishing Agency (and its Director Sergey Plytkevich) and Alexander Gil.
The collection of postcards makes a wonderful gift or tourist souvenir — for history lovers and all those eager to know more about Belarusian-Polish-Lithuanian sites in Vilnya.

From 1600, known as the property of Yevstafy Volovich and, from the 18th century, called Poteev Palace. From the late 19th century to the 1930s, it was owned by the Umyastovskys.

From 1906 until the mid-1940s, the Lithuanian Bookshop was located on its ground floor — belonging to Marija Piaseckaitės-Šlapelienės. From 1906, Lithuanian and Belarusian books and newspapers were sold there. Yanka Kupala and Mikalojus Konstantinas Čiurlionis were regular visitors.

A collection of ancient rarities by Yan Lutskevich was kept in the building and the site was home and workplace to Vatslav Lastovsky (1910-1920) and his wife Maria Ivanauskaitė-Lastauskienė (Lazdynų Pelėda).

The site of St. Nicholas Roman Catholic Church, built in the early 16th century. From 1901-1939, it was the only church in Vilnya where sermons were read in Lithuanian. From 1901-1906, its priest was Juozapas Kukta. The building kept a secret collection of editions published by Martin Kukhta’s publishing house. From 1921, services were offered each Sunday at 10am, with Belarusian language sermons. Until 1940, priest Adam Stankevich served there and, in the 1920s, its priests included Konstantin Stepovich (Kazimir Svayak), Wincenty Godlewski and Yazep Germanovich.

The site of a former Basilian monastery, built in the early 17th century (operational until 1827). From 1823-1824, it housed a prison, where Adam Mickiewicz and Ignaty Domeiko were kept. From 1845—1915, an Orthodox seminary was located there and an altar. It was used for the editorial offices of Belaruskaya Dumka newspaper (1919), and Vilno’s Belarusian Rada (1919).

Constructed in the late 16th or early 17th century, the building is thought to have been owned by Kuzma and Lukash Mamonich (merchants of Belarusian origin). The latter opened a publishing house there, printing the third statute of the Grand Duchy of Lithuania (1588) in Old Belarusian. In 1990, a memorial plaque was unveiled on the building, bearing an inscription in Lithuanian and Belarusian: ‘From 1522 to 1525, here — in the city of Vilnya — Belarusian enlightener Frantsisk Skorina published the first printed books in the Grand Duchy of Lithuania’. 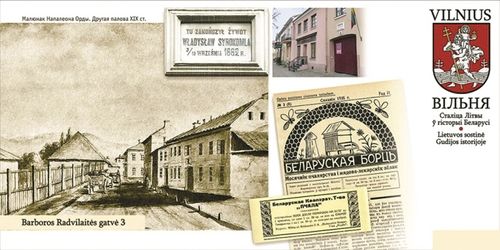 Adam Maldis — a Doctor of Philological Sciences and a researcher of Belarusian-Lithuanian cultural ties:

The project unites more information than I had realised existed, disclosed vividly and interestingly. The wisdom will help anyone travelling to the ancient city.

Arsen Lis, a Doctor of Philological Sciences and a researcher of Vilnya’s 1920-1930s cultural life:

The project is innovative, creative and topical. The author reminds us of the common history of Belarusians and Lithuanians during their life in Vilnya. It contributes to mutual understanding and tolerance between our nations.

The project is a compressed yet substantial narration of the beautiful and ancient city. The past of our Motherland — connected to Vilnya through diverse events and figures — comes to life. The postcards show us its streets and houses.