The blind draw set our old acquaintances from Luxembourg as Belarusian national team’s rival in the first match of EURO-2016 qualification.

The blind draw set our old acquaintances from Luxembourg as Belarusian national team’s rival in the first match of EURO-2016 qualification.

The blind draw set our old acquaintances from Luxembourg as Belarusian national team’s rival in the first match of EURO-2016 qualification. The spot, made once by this squad on the reputation of our national team, isn’t fully removed yet. Unfortunately, this time, we failed to get rid of damnation and the Luxembourg ‘rakes’ again beat on the Belarusian forehead — 1:1. 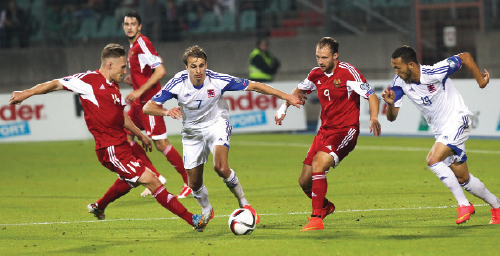 The Belarusians simply failed in the first half of the match, failing not only to attack but even to defend. Only luck, and their rivals’ inability to realise their 100-percent moments, saved the guests from a large score. Nevertheless, at the end of the first half, the hosts achieved their aim, pouncing on another mistake of the Belarusian team and took the lead 1:0 while Belarusians only once hit Jonathan Joubert’s goalmouth.

After the break, Georgy Kondratiev’s team began to play more actively, and gradually pressed the Luxembourg players to their penalty area, making them think only about defence. The persistence of the guests was rewarded in the 78th minute of the match, when Timofey Kalachev’s sharp pass was finished by Stanislav Dragun — 1:1. The Belarusians continued to attack, creating a range of goal moments, but failed to score. The draw evidently disappointed all the Belarusian fans. The footballers didn’t show a harmonious game in the meeting with a nominal outsider of the game, and now have to make conclusions before the next meeting.

The favourites of the group — current European champions Spaniards — defeated in Valencia Macedonia — 5:1 — while Ukrainian footballers lost to Slovaks in Kiev with minimum score — 0:1.

The next stage in Group C will be held on October 9th, when the Belarusian squad will be welcoming Ukraine at the Borisov-Arena, the Macedonians will be facing their guests from Luxembourg in Skopje and the Slovak team will be playing against the Spaniards in Žilina.
Заметили ошибку? Пожалуйста, выделите её и нажмите Ctrl+Enter