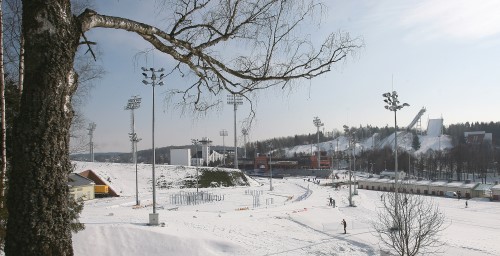 Raubichi is known for hosting significant sporting events and was originally built in 1990 to host the first USSR World Biathlon Championship. Later, it became a hub for the country’s winter sports, gathering world-class sportsmen twice, and junior colleagues on many occasions. Raubichi’s history is rich but the recent event has opened a new page, marked by the first significant reconstruction in 25 years.

Poland’s Tomasz Sikora, returning to Belarus as team coach for the first time after his 2004 European Championship win, can hardly hide his surprise at the improvements, saying, “I’ve heard that much had changed but could never imagine the scale. It’s impossible to recognise Raubichi. It was a great complex even in the past but now it’s incredible. I think few rival it in Europe.”

Most guests seem to agree, with a great many athletes having now chosen to train at the centre. Belarus has bold yet realistic plans to bring world biathlon back to Raubichi, wishing to host a cup round or the world championship. Franz Berger, the Race Director of the International Biathlon Union (IBU), is full of praise for the facilities, although IBU First Vice President Victor Maigurov believes that the stands could be improved upon: a suggestion to which Raubichi’s directors concur. Russian Victor Tikhonov, who won the first World Championship in Raubichi, has guaranteed assistance to the Belarusian application for hosting the world event in 2021 or thereafter: until then, the sporting calendar is already scheduled. However, as recent junior battles have demonstrated, the local slopes will never be empty.

All junior biathlon competitions arouse interest since our young athletes tend to make the shift to adult tournaments more easily, moving from ‘youth’ champions to winning ‘adult’ medals (although not with100 percent success of course). Such countries as Brazil, Australia and New Zealand have been taking part in recent biathlons, although hardly with an idea of claiming victory. Rather, Norway’s Ole Bjørndalen and Tarjei Bø, France’s Martin Fourcade and Belarus’ Darya Domracheva (who many times won junior competitions) are the rising stars of our time.

The head coach of the Belarusian national team, Andrian Tsibulsky, is cautious in making too many assumptions but feels quietly confident of success. Among those he sees that future stars of the track are Norway’s Ingrid Landmark Tandrevold (who won four medals in Raubichi) and Russia’s Alexander Dedyukhin (who also won several medals in Belarus). He praises France’s Lena Arno and Ukraine’s Yulia Zhuravok (who hit every one of their 60 targets over four races) and agrees with silver relay winner Emilien Jacquelin who, being asked about standing alongside Fourcade and Jean-Guillaume Béatrix, commented that ‘time will tell’. These words are true of almost every situation. 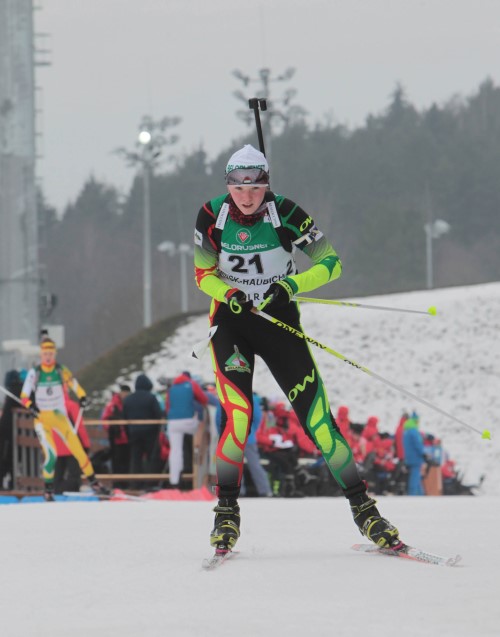 It’s always pleasant to win at home and, without wishing to place undue pressure on our young sportsmen and their coaches, we cannot help but yearn for medals. Coach Vladimir Makhlaev, who trains our Belarusian girls, was smiling after the sprint race in which Dasha Blashko, 19, took her first ever gold. Her success alone quietened any sceptics regarding the future of Belarusian biathlon. In the pursuit, she sadly missed out on a medal but Mr. Makhlaev is optimistic, saying, “The key to victory is confidence: everyone has seen that Belarus’ sportswomen can compete and win at the world level — given necessary attention and support. We shouldn’t ignore the outer regions: Dasha Blashko comes from Vitebsk Region and Anya Sola is from Novopolotsk. I hope it will be easier for promising young athletes to prepare for major competitions now.”

Those who won the relay on the last day of the junior competition couldn’t agree more. Their first ever such victory will surely not be their last.

The World Junior Championship saw Darya Blashko taking the limelight, amidst much excitement and a victorious mood. Her individual gold and relay triumph soon had fans and journalists comparing her with triple Olympic medallist Darya Domracheva. After an amusing incident in the pursuit, when Blashko mistakenly placed herself at her rival’s stand, shooting with 100 percent accuracy (repeating Ms. Domracheva’s past error) the association was certainly to the fore. If only all our young sportswomen might demonstrate such impressive results. 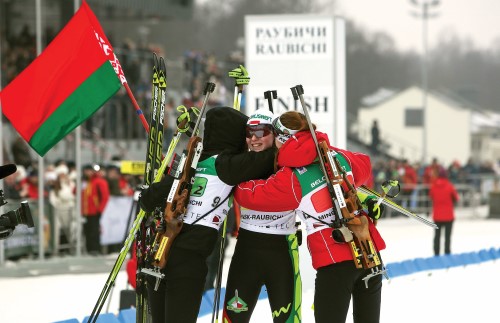 The team of Belarus won in the girls’ relay race at the Junior World Championship in biathlon. Photo BelTA

Medals won at junior events do not foretell automatic future success but, as coaches admit, Dasha has great potential. She admits, “There’s no need to compare me to Domracheva. Dasha is a great sportswoman while I’m just beginning my path. I shifted to biathlon just six years ago, from cross-country skiing. Two years ago, I had a fiasco at the World Championship in mountainous Obertilliach; I was unprepared for its conditions.”

Ms. Blashko’s Raubichi gold follows four race victories during the national selective championship; she also won the Belarusian summer biathlon championship. While others read detective or romance novels in their spare time, she is fond of researching the life of great Norwegian biathlete Ole Einar Bjørndalen.

It’s not so difficult to compare the championships of two decades ago with those of today. People think that biathlon has changed, with all athletes skiing faster, raising the level of competition many-fold, but this is rather an exaggeration. It’s true that much has changed since my own days but, believe me, it’s always been a challenge to win a world championship. Accordingly, junior medals are much appreciated, although they guarantee little. Those who win medals in Raubichi gain the chance to work with the national team, participating in IBU Cup rounds. Victor Krivko and Maxim Vorobey are up and coming biathletes, alongside our victorious sportswomen. We need to support them all, helping them make further progress.