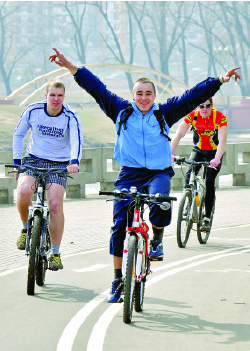 By 2015, Minsk may enter the top-twenty of world cities based on their cyclist network. This forecast was made by the Deputy Director on development of Velozona network, Igor Davydenko.

According to him, the total length of arterial and combined cycle tracks in Minsk may, by 2015, reach 500 kilometres, giving the city one of the most extended cycle path networks in post-Soviet territory. It recently passed Moscow, where cyclists have about 150km of dedicated paths. The Belarusian capital may surpass many European cities, including Madrid, Budapest, Milan, Brussels, Prague and Barcelona. Minsk also will leave behind Singapore, Tokyo, Rio de Janeiro and Buenos Aires. At the same time, the city will still concede to them on number of physical cyclists.

The most extended networks of cycle tracks are in Copenhagen, New York and Vienna, with each of these cities having more than one thousand kilometres of dedicated cycle paths, with cycle networks in Berlin and Montreal, extending over 700km, developing quickly. The Parisian network will reach the same length by the end of this year.

“The feature of Minsk consists of a considerable quantity of combined paths on which bicycles are compelled to divide the space with pedestrians. If in the European Union countries cyclists more often go on separately allocated strip of road, then in Belarus they cycle on the pavements,” the expert noted.

The basic obstacles for cyclists are high curbs. “Partly it is the reason for the big popularity of mountain bicycles among Minsk residents. While interest in city bicycles, on the contrary, is not high. Belarusians prefer unpretentious bicycles which can be used both in a city, and outside its limits,” Igor Davydenko explained.

Infrastructure development promotes the growth of the number of cyclists. Now, more than 400 thousand people — every fifth — use a bicycle in Minsk, with their number increasing by 40 thousand annually. Whilst Minsk is in the lead in Belarus with the number of cyclists (20 percent against 16 percent in all country), active cyclists — those who regularly use two-wheeled transport in the capital — are only slightly more than 1 percent.

The expert pointed out several indicators on which it is possible to create friendly cities for cyclists. Among them is the extent of cycle paths, the number of bicycle parking points, hire stations, routes and relation to cyclists. “Minsk has succeeded on all indicators during the recent years. As a result, we have more cyclists and the average distance of a trip has grown. More and more people use a bicycle to go to work or to spend their days off with a family. With this plan, we have come nearer to the leading cities of Europe,” Igor Davydenko is convinced.

In the summer, over 200 cyclists an hour travel on separate areas of Minsk cycle paths. “It is high indicator which specifies the popularity of this type of transport. And if the overwhelming majority of Minsk residents use a bicycle, even only once a week, people will begin to perceive a bicycle as convenient means for daily trips and we would need more time than required on arrangement of cycle paths,” noted the Deputy Director of the Velozona network.