The Mound of Friendship is a unique place. It was built in 1959 in commemoration of the fighting commonwealth of veterans of the Great Patriotic War, the guerrillas and resistance of Belarus, Russia, Latvia at the joint of three states. This summer, when Belarus celebrated the 70th anniversary of the date of liberation from fascist aggressors, symbolic activities were carried out near the Mound of Friendship. At first, with the participation of veterans a capsule with a message to descendants was laid there. And then the traditional international youth camp Be-La-Rus was opened. 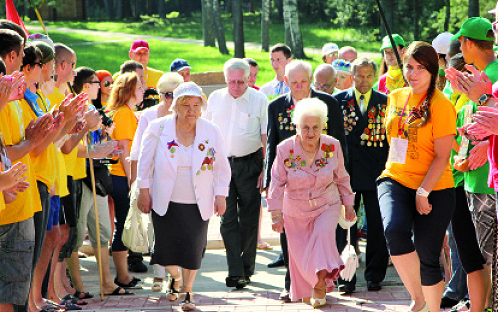 The Chairman of the Vitebsk Region Executive Committee, Alexander Kosinets and temporarily Acting Governor of the Pskov District, Andrey Turchak took part in the laying of the capsule containing a message. In the message, it is said that young people should remember the ordeal which fell to the lot of their ancestors and to protect the friendship between the people. Perhaps, one of the most vivid examples of friendship between young Belarusians, Russians and Latvians is the international camp Be-La-Rus. This year, it opened for the 23rd time. 500 most active, talented and creative members of such public associations, as the Belarusian Republican Youth Union, the Youth Progress Union of Latvia and the Russian Youth Union gathered near the mound. According to Igor Buzovsky, the First Secretary of the Central Committee of the Belarusian Republican Youth Union, the guys consider participation in patriotic activities an honour. “The Mound of Friendship and the monument to the Hero of Soviet Union, Imants Sudmalis, are located today in Latvian territory. It is impossible to approach them, but we transfer flowers there via the Latvian frontier guards. As for the museum of fighting glory, and also monuments to the Komsomol-underground members of the village Proshki and to the Hero of Soviet Union Maria Pynto, they are located in the territory of Belarus and Russia. We visit them, we keep them in order. In the year when Belarus and the Pskov Region marked the 70th anniversary of liberation from fascist aggressors, the camp gave special attention to the patriotic theme.”

The Russians were responsible for the organisation of Be-La-Rus this year. They chose ‘The Cultural Revolution’ as the main theme — a contest-entertaining programme dated to the Year of Culture in Russia. A habitual parade of bivouacs in a camp was transformed into a competition — Come to My House... Participants of the camp got acquainted with Russian traditions and heard sincere Russian songs. A competition for married couples — Belarusian Dawns, Reloading was also carried out. In it, Yana Kurzanova and Alexander Kurzanov from Yaroslavl, who brought their six nice children to the camp, shared their secrets of family happiness. And, certainly, a camp cannot do without a special dish. According to Alexander Shlyk from Bobruisk, it is boiled rice porridge with raisins, based on condensed milk. Football and volleyball matches are also traditional.

The Chairman of the Russian Youth Union, Pavel Krasnorutsky, considers that the ideas of Be-La-Rus need to be developed even further, “Our main purpose is to unite young people from the different countries. We want ideas of the camp to continue to live beyond its limits. We have already discussed with colleagues from Belarus and Latvia more than ten directions, among which are educational programmes, sports, volunteering, patriotic education and student’s self-management. We will choose one or two of the most significant from them and will try to develop and realise them within a year.