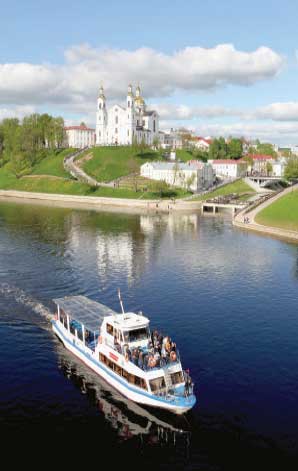 Vladimir Dedyul is one of the few people who know the ‘deep character’ of the River Neman, being one of a team of captains for the steam-ship ‘Olga Solomova’. The vessel has been launching from Grodno’s quay for over 60 years. He tells us that the rules are identical whether sailing on a river or at sea. “Only the water is different: the sea is salty, while river water is fresh. In order to steer a vessel along the twisting and unpredictable Neman, without running aground, you need to be well informed!”

Mr. Dedyul boasts experience of two combat missions in the Atlantic and 15 years of service with the Northern Fleet. To become a captain on the ‘Olga Solomova’, he began as a seaman, and trained for five years as a river transport worker. Steam-ship river cruises are still considered exotic in Belarus, although ten popular pleasure vessels operate. Gomel and Pinsk are the most frequented destinations for people wishing to sail, with Grodno close behind, having restored the Avgustovsky Canal. Besides the ‘Olga Solomova’, the 50-passenger Neman launches from Grodno (constructed by Pinsk ship builders to suit the Avgustovsky Canal and able to run even at night).

The ‘Olga Solomova’ was almost retired a while back, having been set-aside for five years, needing major repairs. At last, in 2006, it was revamped, gaining everything from a new engine to modern internal furnishings. The veteran not only competes with new vessels but was the first from sovereign Belarus to cross the EU river border. Its trial voyage from Grodno, along the Avgustovsky Canal, to Druskininkai was made last summer — thanks to an agreement between Belarus and Lithuania to restore navigation and tourism along the coastal border of our two countries.

Of course, the river fleet caters to more than tourists, transporting about 5.5 million tonnes of cargo: particularly timber and wood products, as well as sand and gravel, used in construction. The Pripyat, Dnieper, Berezina, Sozh, Neman, Western Dvina and Dnieper—Bug Canal are all busy thoroughfares. Moreover, sand, and sand and gravel mixes are extracted from their riverbeds.

Demand for river transportation in Belarus is satisfied by about 700 vessels. Moreover, river transport costs far less than that by road (10 times cheaper) or rail (1.5-2 times cheaper). Of course, geography of delivery is limited to areas served by rivers but demand continues to grow. Belarusian ports are capable of transporting over 20 million tonnes of cargo annually: where one truck can carry 20 tonnes, a barge can hold 400. Clearly, the branch has great potential.