The exhibition’s strong theme was evident everywhere, and most poignantly in the symbolic flowers worn proudly by visitors. All those wishing could write messages to veterans at the stand organised by the Belarusian Telegraph Agency: ‘Proskynesis to You, Veterans’. A childish hand had written such words as: ‘Thank you very much for protecting our land!’ Meanwhile, the 70 Years — 70 Faces photo project, on Gomel Region’s stand, presented the wise expressions of those who brought us Victory. 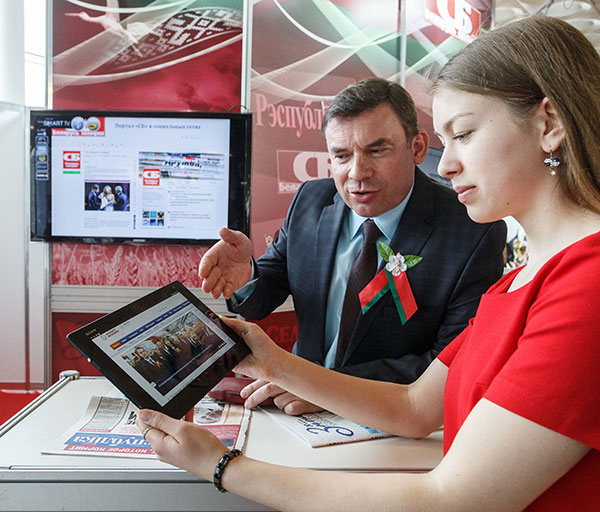 During the solemn opening ceremony, the Deputy Head of the Presidential Administration, Igor Buzovsky, read the President’s greeting. It stated that the event was both bright and significant in the life of the media community. Deputy Prime Minister Natalia Kochanova underlined, “It’s vital that every citizen preserves not only the memory of our war heroes, but gratitude towards the older generation. They should do all they can to prevent repetition of such events.”

Belarus’ Information Minister, Lilia Ananich, commented, “The motto of the exhibition is ‘Words in the Service of Peace and Creation’. In those years of  the most difficult suffering, when partisan Belarus fought Fascism, words forged victory. Underground and partisan brigades released a total of 162 newspapers.”

The exhibition has long become an international event, featuring guests from Russia, the CIS, China, Venezuela, Cuba and elsewhere. Although the current forum is dedicated to the Press Day, the electronic media is presenting its achievements on an equal footing with printed editions. It’s a wonderful opportunity for journalists, editors and creators of the Internet portals to share experience and expertise, learning something new from our ever-changing information space.

Each year brings new technologies, especially in the field of information, influencing mass consciousness and public opinion. Discussions at the exhibition included how to tackle new types of content, how to best use new information transfer channels, and the stylistic trends of online journalism. Of course, the major topic was the accurate coverage of the Great Patriotic War events, under the motto ‘No one is forgotten, nothing is forgotten’.

Information Minister Lilia Ananich believes that the forum is a landmark event. She announced, “The forum brings together over 400 printed media and TV channels from various countries. The exhibition has shown how dynamically the media is developing in Belarus; of the 1,573 printed editions registered, fewer than 27 percent belong to the state. Regional television is expanding, with non-state TV channels appearing.”

Ms. Ananich emphasised that Belarusian people tend to have more trust in the national media than in their counterparts abroad. In this respect, she asserts that there is a duty to ensure that news stories are of the highest integrity and accuracy.

As is traditional, the forum ended with the Zolotaya Litera (golden letter) awards: a photographic contest involving over 500 photographers.