For three decades, the Memorial Church in Honour of All Saints and in Memory of Innocent Victims of Our Fatherland  has become not only a place of repentance for believers, but also a truly national shrine 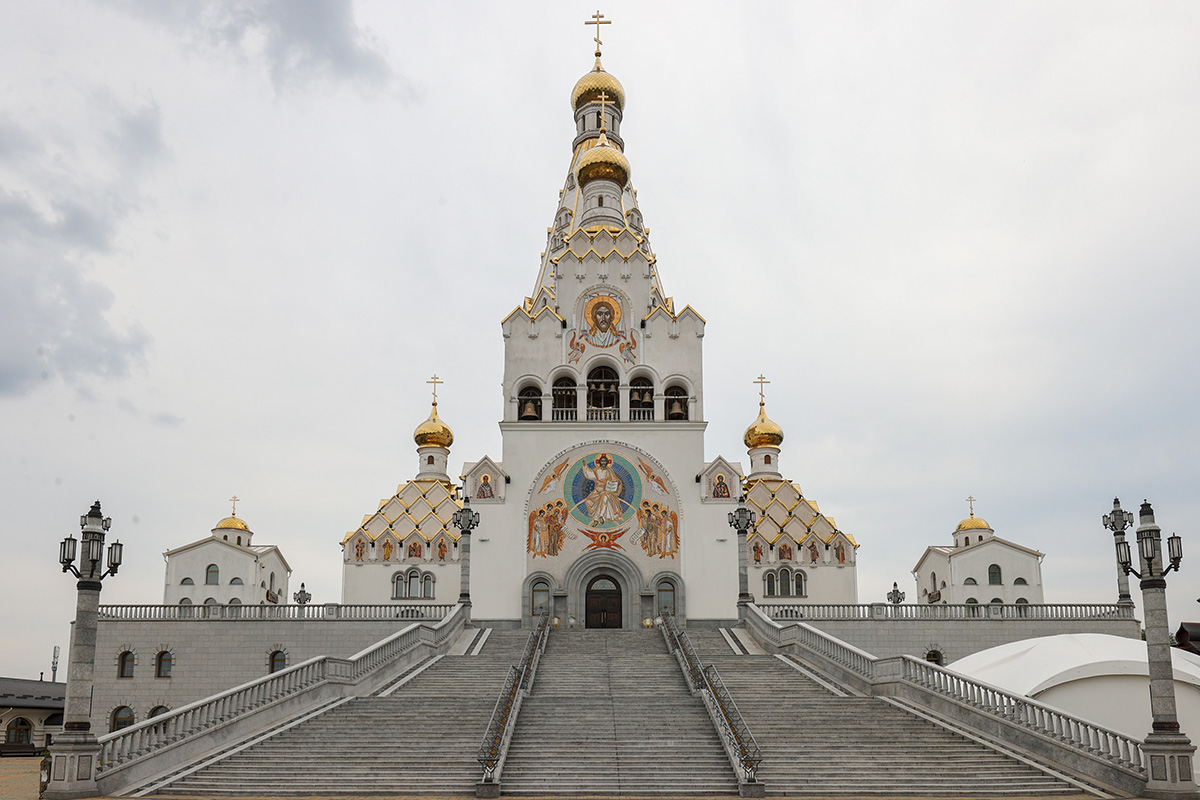 This church is the same age as our young state. The temple was conceived as a symbol of a nation that honours the memory of their heroes and does not repeat the mistakes of the past. It was erected with the blessing of His Holiness Alexy II, Patriarch of Moscow and All Russia, under the patronage of the Belarusian Head of State, Aleksandr Lukashenko, the now-deceased Metropolitan Filaret, the now Honorary Patriarchal Exarch. Today, the memorial temple is a great support for those seeking the deepest meanings of being, a living connection between times and generations.
The white-stone church with golden domes amazes with its grandeur from a distance. Built on a hill in the form of a tent, it creates an impression of both solidity and lightness. It is impressive with its decoration and if you get to know it better, it will reveal itself to be a large-scale complex of historical memory and a spiritual symbol of the Belarusian state. 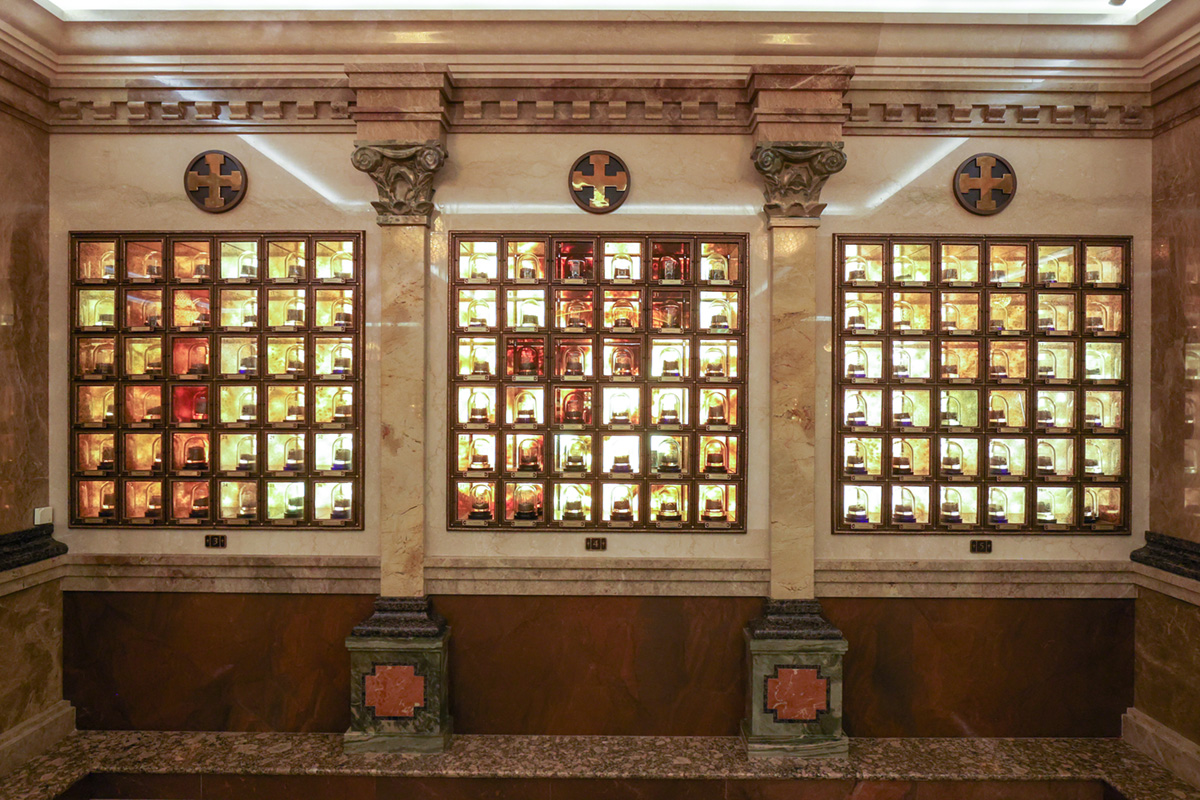 The Rector of the All Saints Church, Fyodor Povny, accepting the congratulations, confesses that it’s hard to believe in the number, “Three decades have flown by in an instant!” 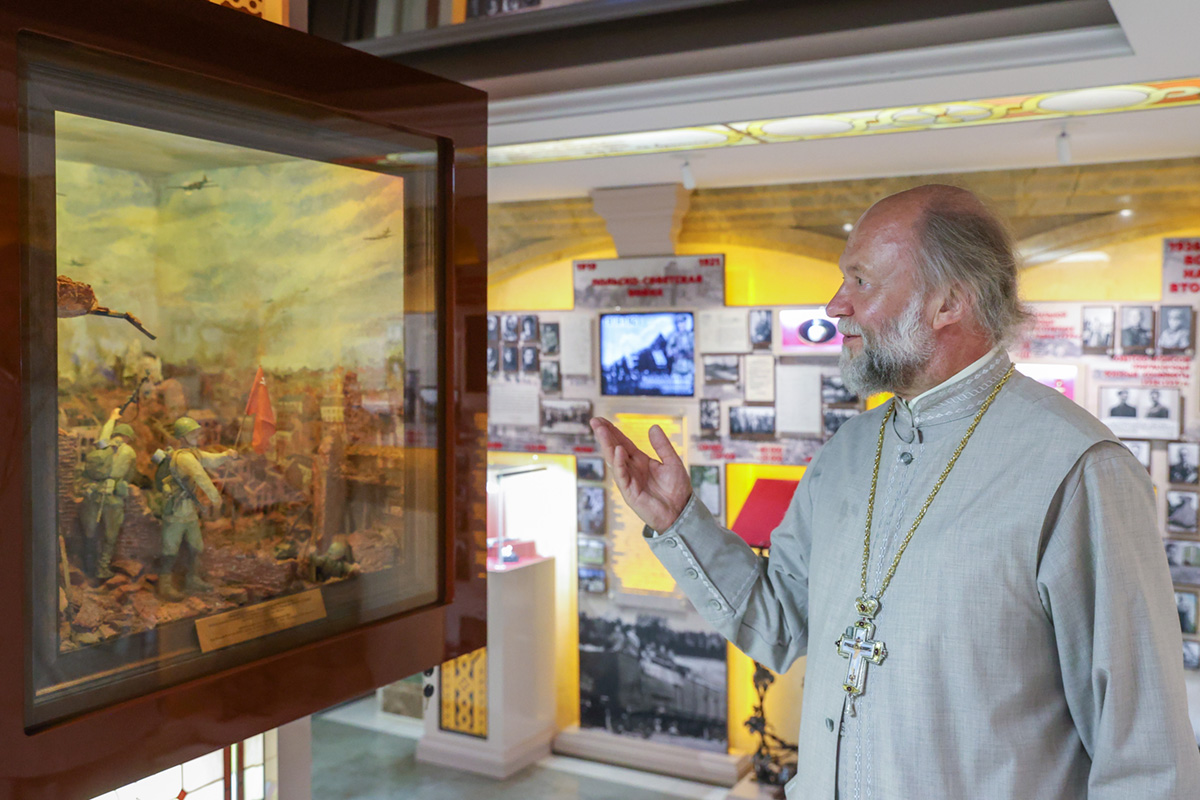 The history of the All Saints parish began with the consecration of the foundation stone of the Memorial Church in honour of All Saints in June 1991. During this time, many events from the chronicle of the parish have become part of the newest biography of modern Belarus. One of these is the solemn burial of sarcophagi with the remains of three unknown warriors — soldiers of the Patriotic War of 1812, the First World War and the Great Patriotic War — in the crypt of the memorial church. Then, on the eve of Independence Day — on July 2nd, 2010 — in memory of the millions of defenders of their native land, Head of State Aleksandr Lukashenko and Metropolitan Filaret of Minsk and Slutsk lit the Unquenchable Lamp with Holy Fire, delivered from Jerusalem from the Holy Sepulchre.
Today it is the largest unquenchable lamp in the country. Anyone can see this symbol of incessant prayer and eternal memory. We go down to the crypt where the lofty idea of the entire memorial temple is revealed.
An everlasting light on a high stand in the centre of the hall is the heart of the crypt. It’s here that people of different faiths come to offer prayers. Orthodox and Catholic believers, Jews and Muslims — everyone can light a candle from the lamp and pray for one’s own ancestors to the best of one’s own faith and spiritual experience.
From the foot of the lamp, it’s as if streams of primordial matter rush upward. The large ball symbolises disembodied spiritual forces. The green crystal bowl changes colour due to special illumination. And even its framing carries meaning. The vine is a sign of the image of Christ. The branches are believing Christians, bunches of grapes symbolise communion and life in Christ. The top of the bowl is made in the form of tongues of flame. Beneath it, the Holy Fire glimmers.
In the centre of the crypt is the icon of the Resurrection of Christ. Below are small arks with particles of the relics of saints: John the Baptist, Saint Luke, Sergius of Radonezh and Yevfrosiniya Polotskaya.


The memory of the victims of military events and peacetime tragedies is kept here. Within the walls of the crypt, there are memorial capsules with earth from the places of battles, the graves of compatriots who gave their lives on the battlefields. However, there is no feeling of mourning. On the contrary, unearthly beauty and solemnity are maintained everywhere.

Niches are located on both sides of the crypt. There are 504 of them. Today more than 220 are filled. Each of them is a symbol of the memory of innocent victims and real heroes. In the small windows of the onyx niches they appear as if they were alive... Veterans of the Great Patriotic War and their descendants come here to honour their memory. 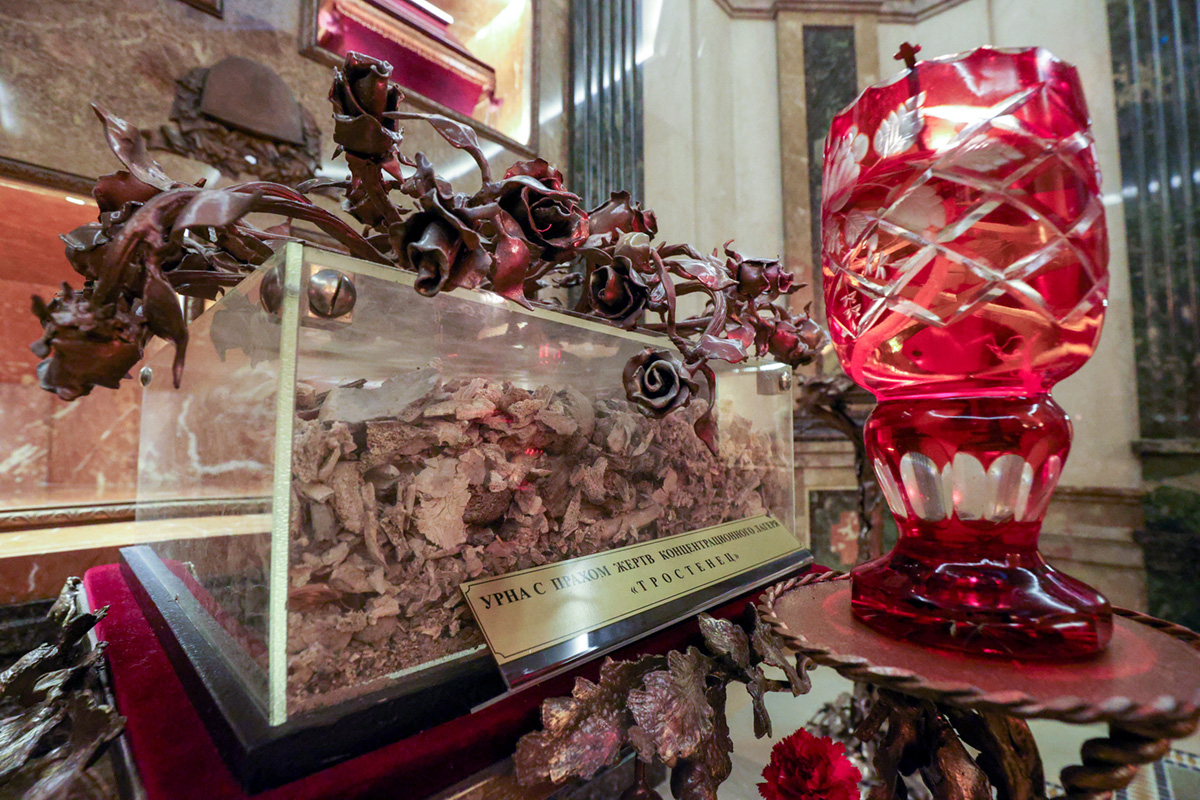 They pray for the repose of the soul of the Soviet ace tank driver, Zinovy Kolobanov. On August 20th, 1941, during the Kingisepp-Luga defensive operation, the crew of his KV-1 tank in one battle near the strategic transport hub Voiskovitsy-Krasnogvardeisk knocked out 22 enemy tanks in the convoy from an ambush. The earth from the place of this battle is in one of the niches of the crypt.
The memory of the Hero of the Soviet Union, Feodosy Smolyachkov, is also honoured. This native of the Bykhov District of the Mogilev Region went to the front as a young boy. He defended Leningrad. He is considered to be one of the best snipers of the Great Patriotic War. Of the 126 sniper bullets given to him to destroy enemies, 125 hit right on target. The earth from his grave was brought from St. Petersburg to the crypt.
There is also a capsule with earth brought from the Verkhnedvinsk District of the Vitebsk Region. According to the plans of the Nazis, 40 square kilometres of the region’s territory was to be wiped off the face of the earth along with the people. Eight decades have passed, and the population in this area is only half restored. How many such corners are there, incinerated by the Nazis throughout the country... Ozarichi concentration camp, Krasny Bereg, Semkovo, Khatyn, Ola... In every window of the memorial wall there are millions of deaths and mutilated lives. Here a person understands that war is not a dry paragraph from a history textbook. This is a huge amount of lives given up. Here they are, these lives...
The urn with the remains of prisoners of the Trostenets concentration camp was presented at the Nuremberg trials in November 1945 as one of the proofs of the atrocities of fascism. From 1944 to 2016, it was kept in the Museum of the History of the Great Patriotic War. Later it was transferred to the memorial temple. This is how symbolically six thousand people — burned by Nazi occupiers — found peace.
During the tour, the abbot leads us through the halls of the memory museum — located next to the crypt, describing the exhibits and showing dioramas depicting war scenes from different times. Considering them, one cannot but think about what spirituality and patriotism are and why these concepts are so closely intertwined in the museum of the memorial church. 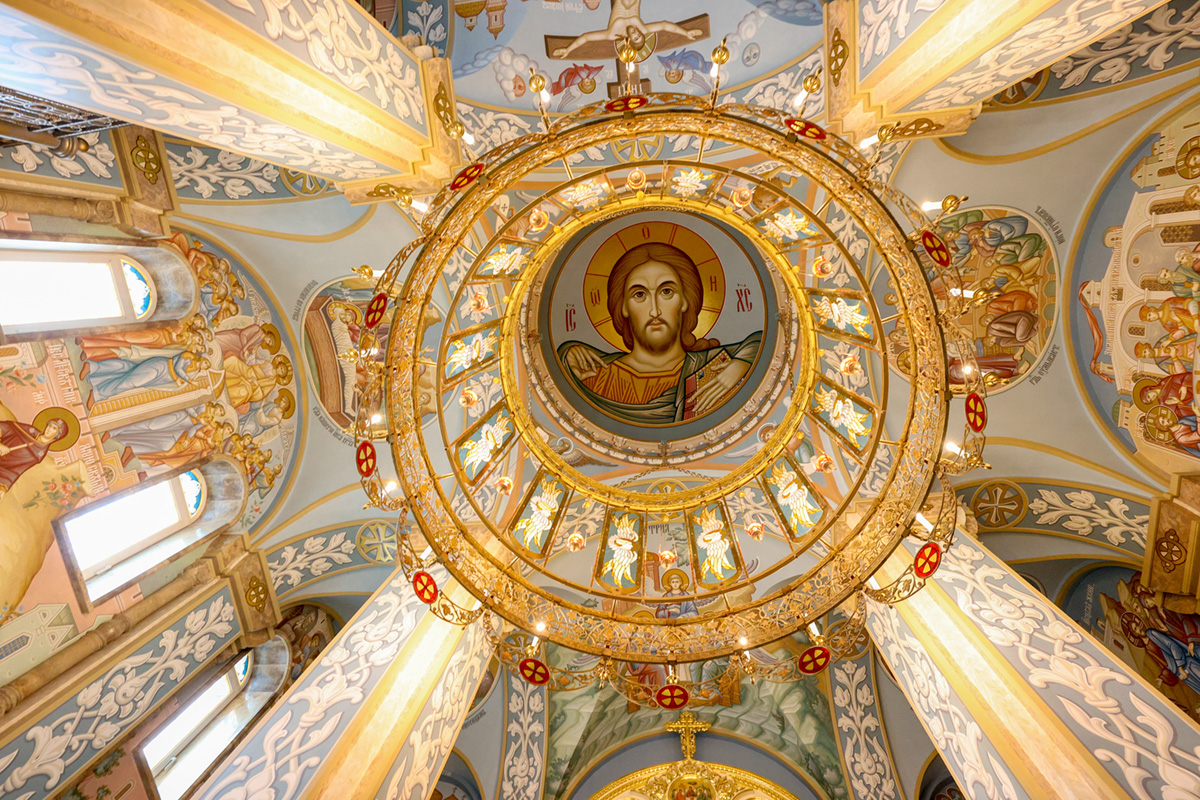 In All Saints Church, everything is in live contact not only with the history of the country, but also with the Belarusians themselves. One of the niches — it was the first to be filled — contains part of the inner skin of the Kursk nuclear submarine, which sank in 2000. Three of the 118 crew members were Belarusians. Every year, submariners who now live in Belarus meet in the crypt during the litiya, when a prayer is read.
The tragedies of peacetime are remembered by the bas-reliefs dedicated to the memory of those killed in the war in Afghanistan, the liquidators of the consequences of the Chernobyl disaster, the tragedy on Nemiga in May 1999 and the explosion at the Oktyabrskaya metro station in April 2011.


In the crypt and the museum of memory we see an example of heroes and their feats, while saints look at us from icons in the main temple space. These are not only the ancient ascetics of Egyptian deserts and monasteries, but also compatriots who fought for the faith and served God. 74 Belarusian saints are depicted on the icons of the local row of the iconostasis, on the walls, columns and vault of the temple.

The main temple space unfolds in the form of a 54m tent. Its height indicates that prayers for the souls of soldiers who fell on the battlefield, whose ashes are symbolically buried in the crypt under this main altar, are heard in heaven. From there they bless us and pray for we who are living today.