The draft decree On Property Management was submitted for consideration at a meeting of the President of Belarus with the Government leadership. Starting the conversation, the Head of State recalled that, last year, it was decided to concentrate in one legal act all the most important provisions in this area with an absolutely transparent scheme for the implementation of certain provisions. 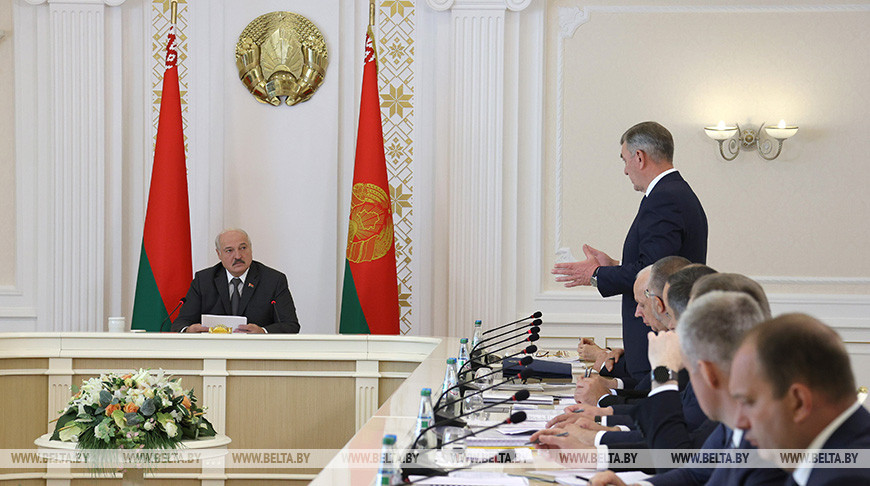 At the same time, Aleksandr Lukashenko stressed, “We’ve managed to avoid, as they say, frenzied, indiscriminate privatisation in Belarus. As it used to be called earlier (you already forgot), shock privatisation. Long-established enterprises are working steadily in the country, new production facilities are being created, including at state industrial sites. Both private and state enterprises are being set up. However, the efficiency of the use of state property needs to be improved. This also applies to private production.”

As the President pointed out, the Government has prepared a comprehensive draft that regulates how to manage both fully state property and property of business entities with a state share. The main changes are related to the redistribution of powers between state authorities, “That’s right, but please note again, as I’ve mentioned before, powers are redistributed mainly from top to bottom: from the President to other bodies of power vertically. This must be done.”

At the same time, Aleksandr Lukashenko pointed out that there are fundamental issues that should be controlled by the President. Obviously, these are large property complexes, as well as agricultural and forest lands. The Belarusian Head of State underlined, “The President, no matter how much he wants, cannot completely transfer these powers vertically down. It shouldn’t be like that. Control is necessary.”

As far as powers of a smaller scale are concerned, they may well be delegated to lower levels. Aleksandr Lukashenko recalled the recent decision to provide land plots. On certain points, the right to make corresponding decisions has been given up to chairs of the district executive committees. It is not the level of the Head of State to consider land disputes between neighbours or a private developer and the state. As far as other issues are concerned, the President strongly recommends not to rush, “There are issues dealing with allocation of agricultural and forests lands for development. This remains under the control of the President. I’m still the President and I think it should be so. Probably, after me you may decide differently, it’s up to you. However, now the situation is as follows, and the President (I mean myself) is fully coping with these powers. There is no need today to address these issues even to the level of governors.”

Moreover, Aleksandr Lukashenko noted that there was such an experience, and it turned out to be unsuccessful. The President emphasised, “Land resources, state property, finances are the three pillars of any government. I repeat once again: we are moving carefully and calmly in this direction. Maybe we will come to the conclusion that the President will not deal with these issues at all. Maybe even the Government will only partially deal with them while local authorities will be responsible for this.”

However, these are possible changes in the future while at the moment the system is already built. The Head of State continued, “Most decisions will now be made locally. We’ve agreed on this a long time ago, except for the ones I have mentioned. But I would like to hear what these proposals of the Government will lead to? Won’t the state lose control over the sale of the most attractive assets? Won’t we create loopholes for corruption and speculation? The experience of the neighbouring countries warns us of this."

The Head of State also asked, “What innovations are proposed in relation to business entities? What mechanisms are envisaged for the involvement in the turnover of unused areas of enterprises? Once we made a decision that empty facilities – unfinished construction sites since the Soviet era – will be involved. What did local authorities suggest in this regard and – most importantly - will it have an effect?

Aleksandr Lukashenko noted that he was informed that there are proposals on the draft by the expert council under the Council of the Republic and the Minsk City Executive Committee. It is important to read these opinions as well. The President noted, “You know my requirements well: the legislation should not change too often. If we see that changes are urgent, then we must make sure that everything is taken into account.”