Fires in areas contaminated with radiation carry an additional danger: hot air raises settled radioactive substances, with smoke they can be transferred to other areas, and also adversely affect the health of firefighters. Therefore, a prototype of a specialised manoeuvrable highly passable fire complex was developed under the Programme of joint activities of Russia and Belarus within the framework of the Union State for the protection of the population and the rehabilitation of territories affected by the Chernobyl disaster under the control of the Department for the Elimination of the Consequences of the Chernobyl Disaster of the Emergencies Ministry.

The height is about four metres, the length is 11 metres, the weight is 17 tonnes without loading, and all this is on massive pneumatic trucks — the dimensions of the fire complex are impressive, but at the same time it looks compact. The unique machine of the Belarusian design is equipped with everything necessary not only to extinguish fires, but also to protect the crew, as well as preventive maintenance. It demonstrates its capabilities at the testing and research site of the Emergencies Ministry near Borisov in the presence of participants in acceptance tests, including representatives of the Department for the Elimination of the Consequences of the Chernobyl Accident of the Emergencies Ministry, specialists from the Research Institute of Fire Safety and Emergency Situations of the Emergencies Ministry, the Zubr Republican Special Forces Detachment of the Emergencies Ministry. The performance of the unique manoeuvrable machine is also observed by its creators from the POZHSNAB LLC and, of course, by those who will operate it — a delegation from the Polesie State Radioecological Reserve.
According to the plans, the complex should take up combat duty by the end of 2022. 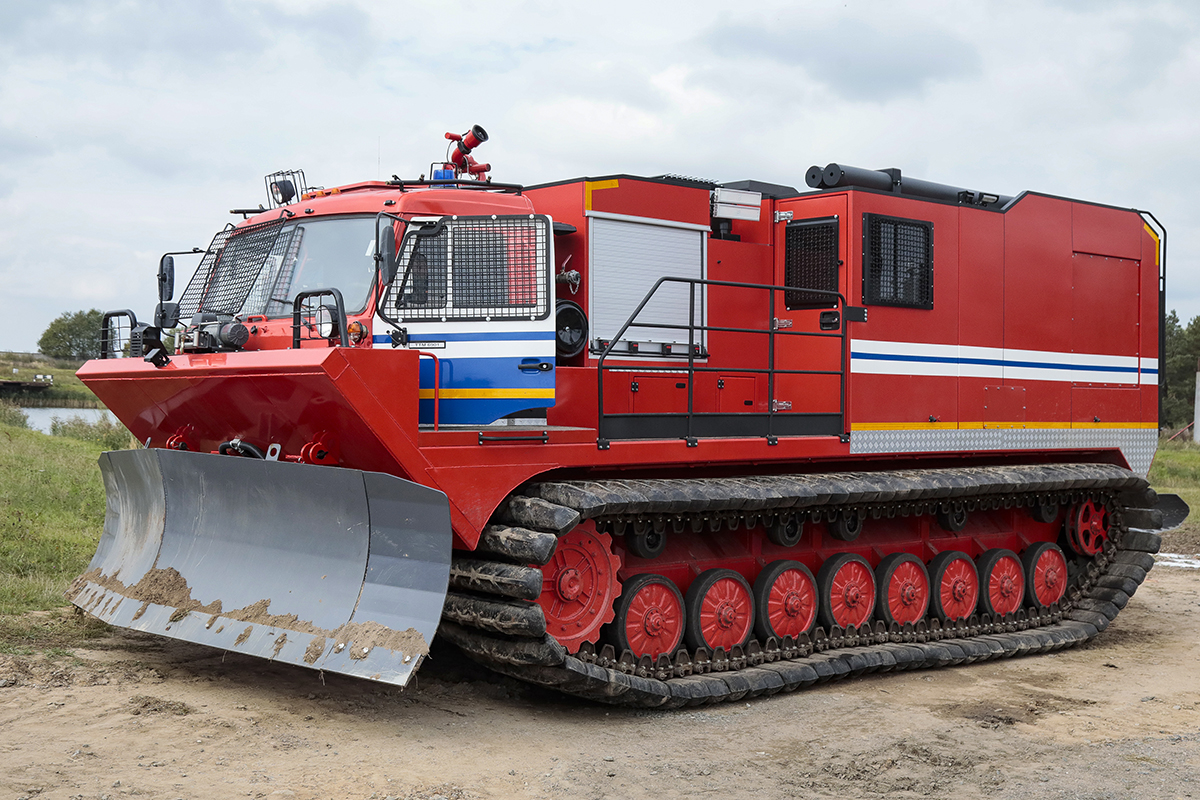 With a short roar of the engine, the fire complex slowly but surely approaches a pile of automobile tires burning with a bright flame and extinguishes the fire with a jet from a fire monitor within a few minutes. The maximum distance that the jet hits is about 60 metres.
The fire emits the last wisps of smoke and dies. It seems that the fiberglass tank, protected by a metal case, is empty. But this is not a problem: the complex can be ‘refuelled’ with water from a third-party source, which is demonstrated to the audience. In reverse, it gets to the reservoir and goes down a rather steep slope. At some point, it even seems that it is about to roll into the water — and this, by the way, does not matter at all: the boat body structure and rubber tracks will allow the car to swim if necessary. But the tracks keep the complex on a slippery surface, and in a matter of minutes the barrel is full again.
“The volume of the tank is 3.5 tonnes. This is not too much, but it corresponds to the priority tasks of the complex. The time of arrival is the determining factor in extinguishing a forest fire. In the first half hour, one hundred grid squares are extinguished, after an hour — kilometres, after two hours — hectares. The main task of this complex is to extinguish a ground fire in a timely manner by plowing the site and clearing hard-to-reach places until it is completely localised,” comments Pavel Kovalev, chief designer of POZHSNAB LLC.
In case the car is in the epicentre of a fire, a self-extinguishing system is installed to protect the crew. Its lower contour irrigates the caterpillars, and the upper one — the cabin and buildup.


There is always room for improvement 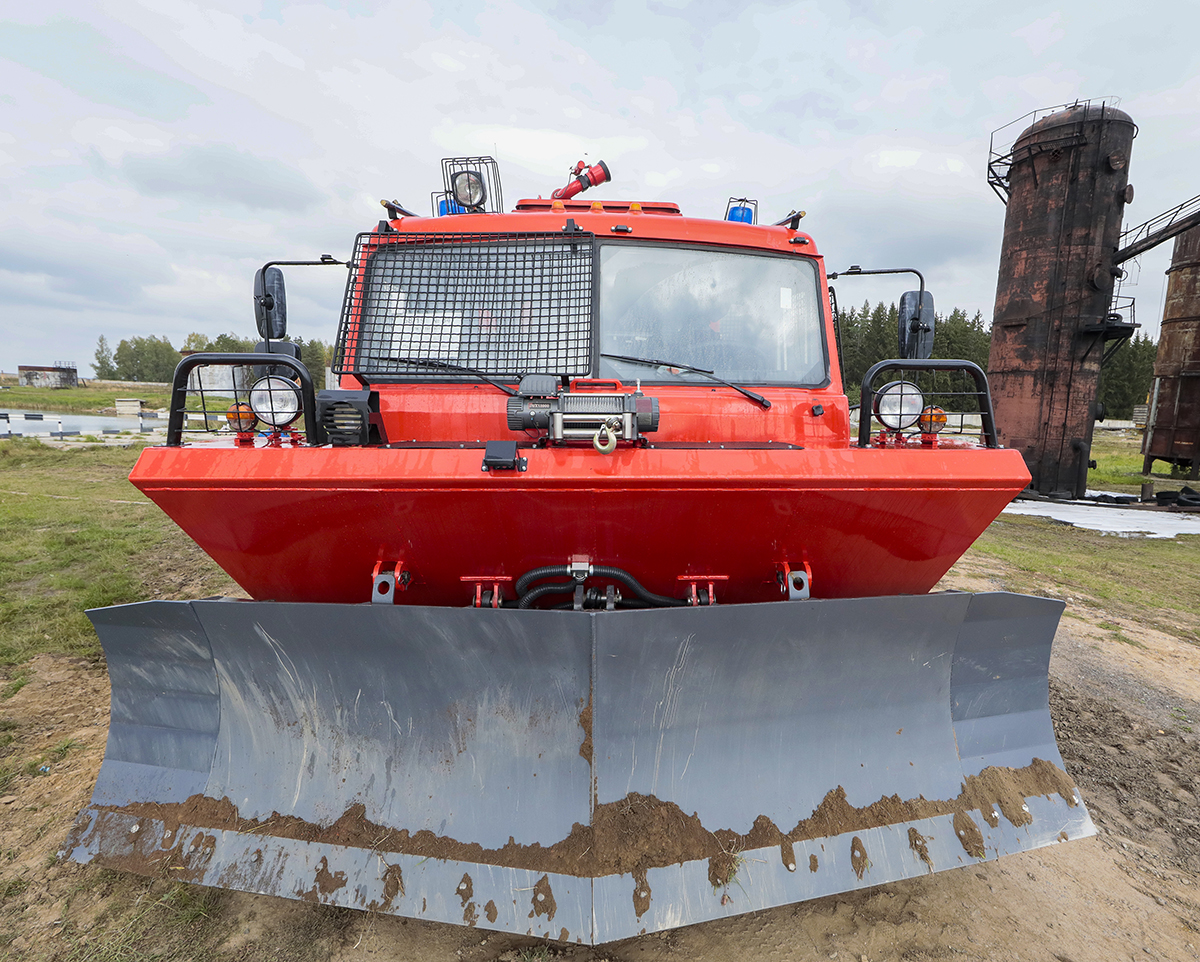 Surprisingly, the turning radius of this colossus is quite small. This is what the members of the working group note when the machine demonstrates its cross-country ability and plowing. Its front end is equipped with a large, hydraulically operated wedge blade. This powerful metal nose will easily cope with any thickets. Behind the complex, a powerful plow is provided to create mineralised firebreaks that will block the path of fire.
The attention of the Head of the Centre for Chemical and Radiation Protection of the Zubr Republican Special Purpose Detachment of the Emergencies Ministry Vasily Shalepin is riveted to the conditions in which the fighters will be. Both the cabin and the additional module for rescuers are airtight, equipped with a filter-ventilation unit that pumps purified air with excess pressure. Thanks to this radiation cannot reach firefighters. They do not need to go outside in places with heavy pollution, which the dosimeter will show: the control of water and foam communications as well as the pumping station is automated, so it can be controlled from the cabin. The view is provided by video cameras mounted around the perimeter of the car, and visibility is provided by a mast with a powerful searchlight that rises on the roof.
Summing up the results of acceptance tests, the members of the working group noted that the sample complies with the terms of reference and functional purpose, and simply leaves a very positive impression. 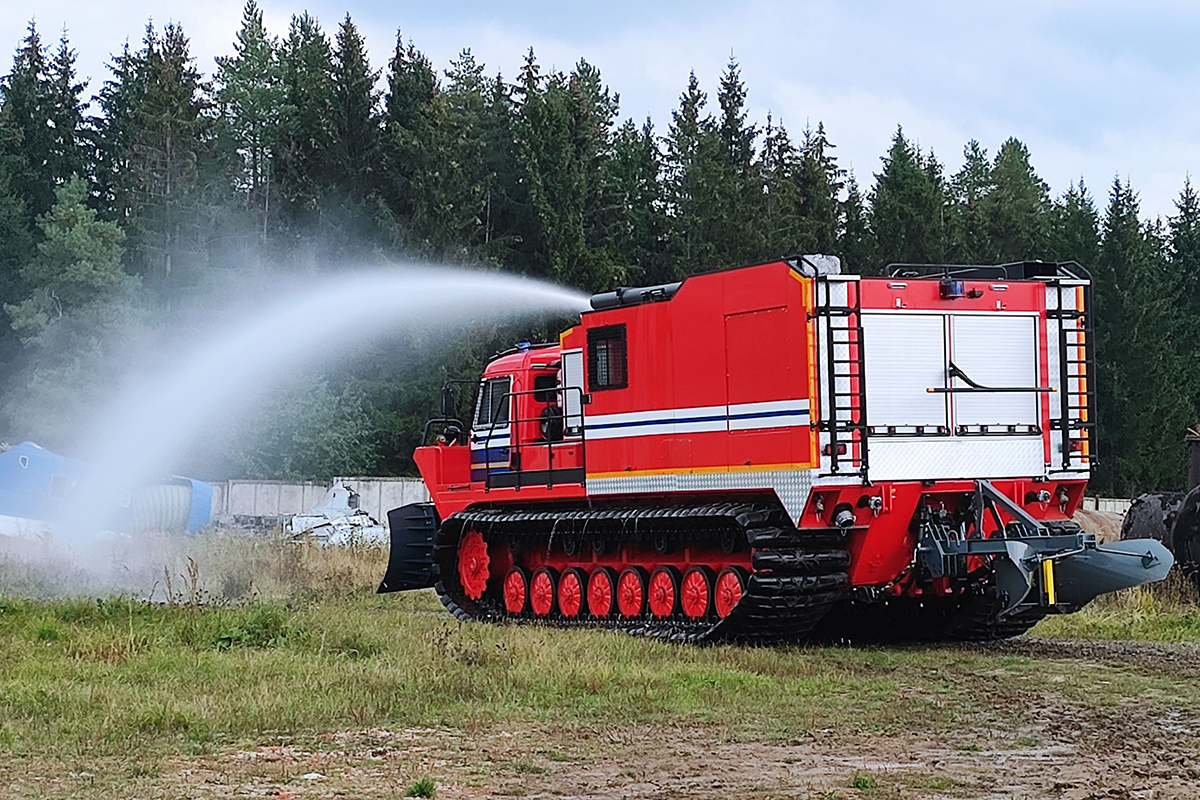 It remains to add that the unique complex for extinguishing forest fires exists today in a single copy in the world and is a Belarusian development. Its localisation within the framework of the Union State is almost one hundred percent. For example, the pride of the designers was the pumping station they created and implemented, which replaced similar units from Europe or America. The car uses a Belarusian-made MAZ-Weichai engine.
The cost of the fire complex is 40 million Russian rubles — this monetary unit is used in the Union budget. It is filled together: 35 percent of the funds are invested by Belarus and 65 percent by Russia. In the same proportion, the money is spent on the needs of eliminating the consequences of the Chernobyl accident in both countries.
By the end of the year, the machine will take up combat duty and will allow performing the most difficult work to eliminate fires in hard-to-reach places in areas with high levels of radioactive contamination, including swamps and peat bogs.