After a wreath-laying ceremony at the Mound of Glory, Aleksandr Lukashenko spoke with young people participating in the Memory Train project. One of the youngsters from Dagestan voiced a proposal to the presidents of the two countries to declare 2023 as the Year of Historical Memory in Belarus and Russia. 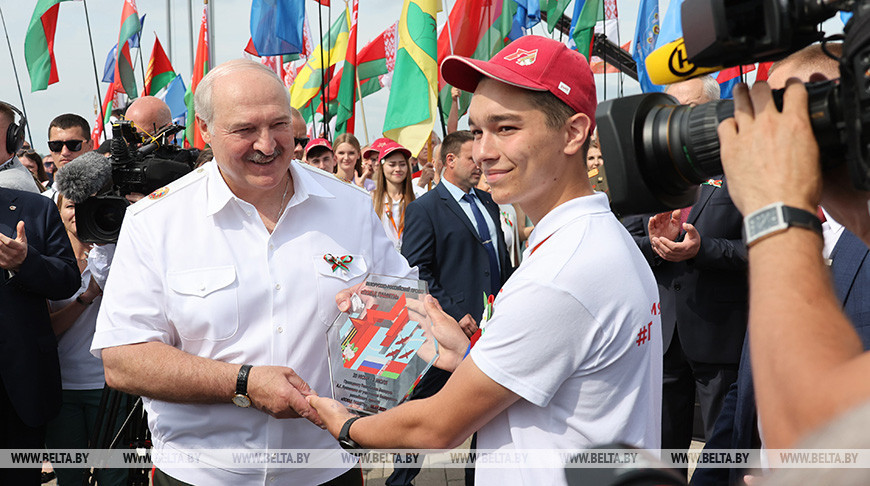 “The idea is very good. I promise that we will discuss it in the near future. Since you have voiced it (unless Russia has already made a decision with regard to the following year, as they also have such experience), I think it will be accepted. Thank you for this proposal!”

The project participants also thanked the President for the development of youth initiatives in the country, for the support provided to the Memory Train patriotic campaign and presented the Head of State with a photo album and the Memory Train symbol.

“Thank you very much! You are really great! I am glad that, after many years, Russians and Belarusians are finally together like this... Finally, in Russia they understood who their close friends are, as well as in Dagestan, Khanty-Mansiysk, the Far East, Magadan, Chukotka, Vladivostok, and Kaliningrad. Thank you very much!” said Aleksandr Lukashenko.

Moreover, the President supported the youth initiative to supplement the Mound of Glory complex with an alley of memorial signs bearing capsules of soil and descriptions of feats of arms of the cities awarded pennants ‘For Courage and Fortitude during the Great Patriotic War’.

“It’s very logical. This is a reasonable and good proposal, I think it can be accepted,” stressed Aleksandr Lukashenko.