In his Address to the Belarusian People and National Assembly, the President urged to look back and – prior to taking a decisive step towards new political horizons – give a fundamental assessment of what happened in August 2020 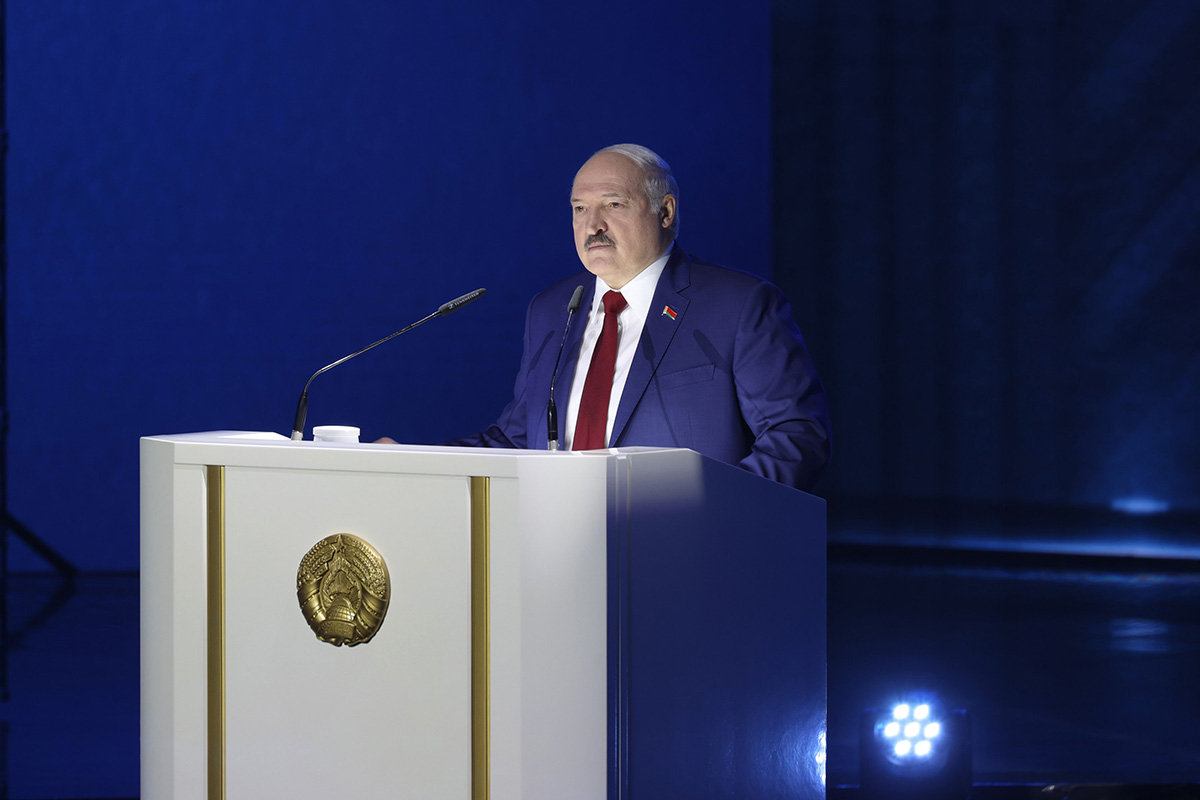 “Let us call a spade a spade. In August 2020, an attempt was made to permanently interrupt the evolution of the Belarusian nation, to cross out our development, to throw us back. Greedy, exceptionally cynical, immoral people, imbued with contempt for Belarus, wanted to come to power. We see this now. They aimed to eventually dissolve the country, bring it to its knees and subordinate it to external influence – exactly in the way our Ukraine is being methodically destroyed today,” the Head of State addressed those present.

Aleksandr Lukashenko emphasised that – when analysing the events of August 2020 – some experts assume that they were rooted in the internal reasons: discontent of society, system-wide mistakes, and so on. In this regard, the President proposed, “Let us scale the historical map up and take a close look at the periods before and after that. What will we see? For a long time, Belarus has been building up its own independent policy, being in the centre of Europe. We were open in every matter. We were borrowing from them everything that was acceptable to us – except only for our values and ideals. These have been and will remain sacrosanct. It is absolutely unacceptable to impose someone else's path on us!”

According to Aleksandr Lukashenko, free and sovereign Belarus did not fit into the plans of many geopolitical policy makers in the West. “Therefore, they were constantly trying to derail us through colour revolutions. Think back to 2006. Do you remember tents here? Do you remember how they soiled the centre of Minsk? I then saw a lot of such ‘enlightened’ people here who wondered where the President was and why he was not putting things in order. I then restored order within a morning. Think back to 2010. Do you remember an attack at the House of Government? We survived that – including overturned police cars and a massacre in the streets. This happened every electoral year. They made a mess of the city… The Belarusian people have been resolutely repelling all such onslaughts – to become stronger. The preparation for the 2020 rebellion, taking into account the failures of the past, was carried out much more seriously – proceeding from the mistakes made earlier. We definitely regard the events that took place then as a multi-stage and co-ordinated technology,” he explained.

According to the President, it was implemented simultaneously along several directions, “Ideological expansion was the first point. Acting by means of various educational programmes and seminars, the West was trying to impose so-called democratic values on our people. It also promised that Belarus would enjoy a pan-European idyll.”

“Financing was the second point,” continued Aleksandr Lukashenko. “It is already known for sure that more than $6bn was allocated to destruct Belarus. They really wanted to end us once and for all.”

The Head of State added, “Infrastructure was the third point. A network of sleeper cells was created all over the country. It included so-called non-governmental organisations, certain mass media, Telegram channels, and bloggers. Thousands of such anti-state structures were operational in the conditions of dictatorship, as they like to call us there. All those simulative environmentalists, human rights activists and pseudo-journalists tried to destroy the state. Openly speaking, we also failed to pay enough attention to that process. When I was setting a task, they were not always implemented – to be honest, I felt and saw it. I did not have enough time to monitor the execution of my orders since I was too immersed in the economy: industry, agriculture, the financial system. You understand this and saw what was happening in those days. Moreover, those people who tried to destroy our state did not work anywhere; they did not know how working persons lived. However, they lived quite well at the expense of western funds.”

The Head of State noted that transition to a soft political pressure was made on the eve of the elections, “Look back at how many various guests used to frequently visit us before the elections. They were assuring us of help and friendship. The United States even promised to provide us with 100 percent of oil when we had a conflict with the Russian Federation, do you remember? That was happening under a specious excuse to preserve independent Belarus. There were attempts to set the two fraternal peoples by the ears right on the eve of the elections.”

Aleksandr Lukashenko also recalled a provocation with the Wagner contractors which western special services tried to arrange through the Ukrainian forces – ‘to turn the Belarusian President against Russia during the election campaign once and for all’, “Time will come, and we will figure it out. After a failure, the West has crossed out all previously reached agreements, signed treaties and numerous promises. Information manipulation, calls for violence, training of militants and terrorists, imports of weapons and ammunition began. The latter is still ongoing. Finally, the 2020 August protests – far from being peaceful – were organised. They eventually transformed into criminal forms of a radical nature. This is still under way. Happily, Belarusians – as in the most difficult times of history – have demonstrated their political wisdom and foresight, determining their choice for the ages.”