It’s nice, whatever you say, to realise that in Belarus girls are not only the most beautiful, slender and graceful, but also talented, hardworking and diligent. The recent world championship, which ended in Japan, confirmed these maxims and added a couple more. Our excellent rhythmic gymnastics team returned home with a suitcase weighed down with medals (only the Russians won more), and the satisfaction of having had a brilliant season. They confidently expect that the coming year will be even better. 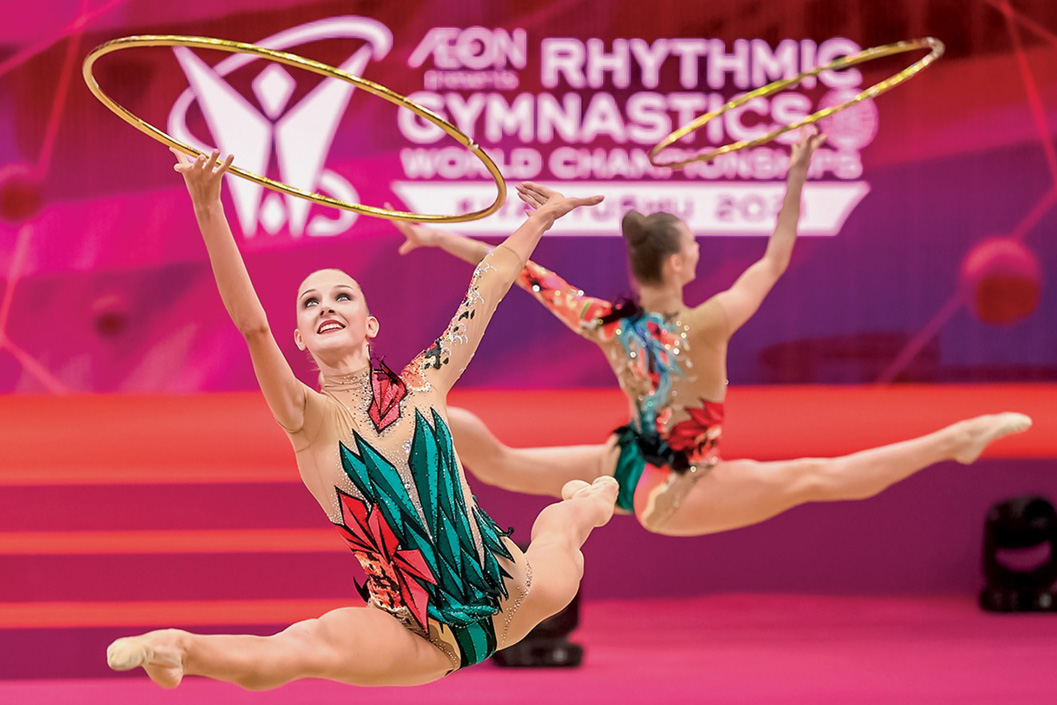 Extract of performances by Belarusian athletes in the group exercises
Photo: www.fig.net

Gold, two silver and two bronze awards in individual exercises, third place in the group all-around and in the team event: a total of seven medals — a catch that cannot be called modest. In all the personal programmes, the Belarusians climbed the pedestal and the result would have been even higher if the stability of the group members had not been let down; the girls managed to win medals in the exercises with the balls, as well as with hoops and clubs. It’s a shame not to have a full winning house but now it’s clear what needs to be worked on next and our coaches are excellent at working on mistakes! 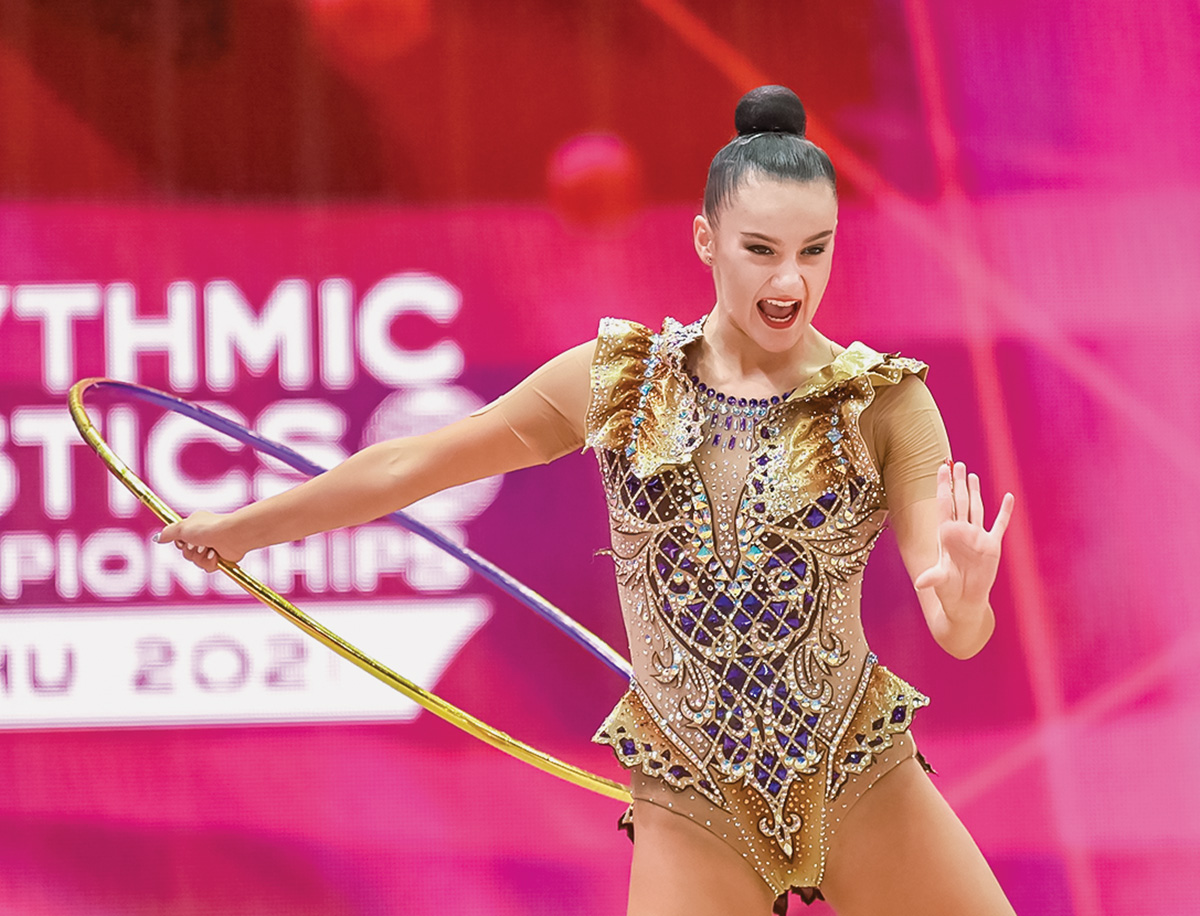 Alina Harnasko
Photo: www.info@fig-photos.com
Rhythmic gymnastics is a specific sport. It is for connoisseurs. This is a kind of sports opera with ballet, a theatrical performance in the ‘ultra’ category with such aerobatics that it will take your breath away. This kind of sport can be misunderstood, but it is impossible not to accept it as it caresses the eye, like any high art. The performers flourish at an unusually young age; champions, as a rule, manage to compress and fit their rich careers into two Olympic cycles, after which they leave the big carpet at an age when everything is just beginning in other sports. The Averina twins are now 23 years old, Yevgenia Kanaeva won her two Olympic golds at 18 and 22, Margarita Mamun — at 21, Alina Kabaeva was shining from 16 to 23... Alina Harnasko of Belarus turned 20 in August while Anastasiia Salos is now 19. Harnasko burst into the pool of elite gymnasts in a whirlwind this season, winning bronze in Tokyo 2020 and claiming four world championship awards: silver in the all-around, as well as gold, silver and bronze in individual events — the result is amazing! If injuries and disruptions are avoided, then by Paris-2024 Alina may well aim at the result of her personal trainer Marina Lobach, who won the 1988 Seoul Olympics in a stunning style, which has not yet been surpassed in Belarus.

But at the same time, Salos cannot be discounted in any case — she is a no less talented and hardworking girl than her teammate, although she has been temporarily moved to reserve positions. Do not forget that it was Salos who won the national championship in 2020 and was considered the number one in the team. So Nastya, no doubt, will take her own, and in the conditions of such a wonderful competition, the skill of the girls simply cannot but grow. 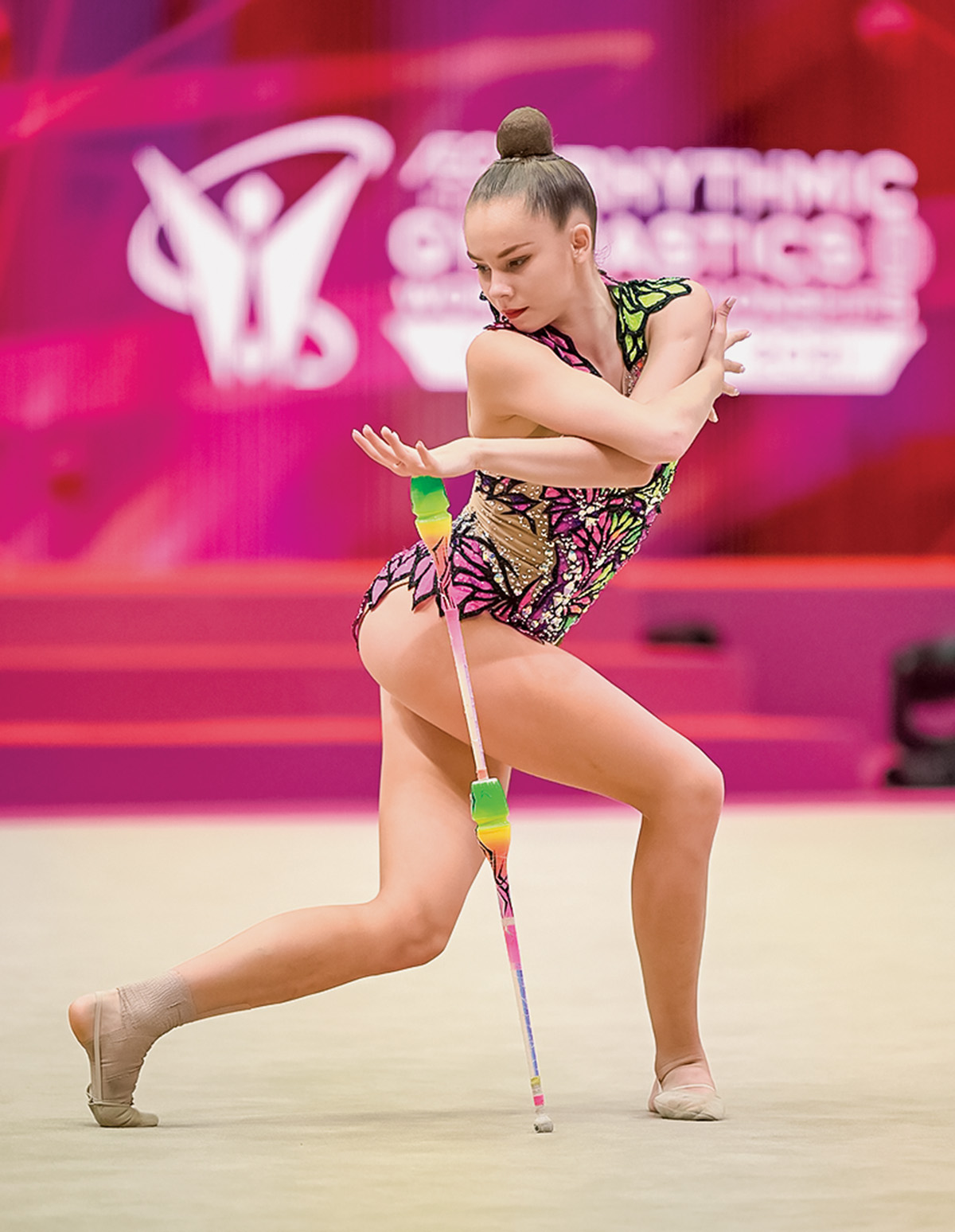 Anastasiia Salos
The success of Belarusian rhythmic gymnastics, which continues to maintain its reputation and remain a world proven brand for years (unlike the Ukrainians, for example, who have managed to all but destroy their outstanding school), is not accidental. Its basis is clearly and professionally structured work at all levels, from kids to professionals. A separate cohort, of course, is the top echelon, the professorial coaching school, where the maestros include Irina Leparskaya, Marina Lobach, Lyubov Cherkashina... And all of them are surprisingly well-integrated into the policy of state support for sports, without which it would be impossible to stay afloat and show such stable and high-quality results. An example that confirms better than any words that the scheme works like a clock is the Rhythmic Gymnastics Palace, which opened its doors three years ago, located in a picturesque district of Minsk. “We have been waiting for this for a very long time,” Irina Leparskaya said then. “I myself drew all this and have already seen it a hundred times in a dream. We entered here with positive thoughts and a good mood. I am very grateful to the President for his support, everything here is at the highest level. And everything is Belarusian, except for the carpets. We take good care of our homes and teach our children to do this. They understand and appreciate everything. There is no exaggeration in the fact that you can live here. This is our real home. At the same time, all children’s schools will remain in their places, we select only the best, most promising ones and we will wait for replenishment from schools every year. We look for talents and raise incredible sportsmen and women from them, we will do our best and a little more.”
As you can see, the words of the head coach emphasised the case. “Each of our girls has a dream of her own,” added Irina Yurievna. “And we live and work for the sake of every pupils’ dreams.” Alina Harnasko and Anastasiia Salos have already begun to fulfil their dreams. However, the halls and other premises of the Palace of Gymnastics are not empty, and work is in full swing here every day and competitors are rapidly growing behind the backs of the elite gymnasts. Darya Tkacheva, Anna Kamenshchikova, Aryna Krasnarutskaya... These and other girls, too, will soon be ready to really surprise. The main thing is to work, to believe and, of course, to dream.