The military-political situation around Belarus and measures for further response to it became the main topic of the meeting of the Commander-in-Chief, the President of the Republic of Belarus, with representatives of the country’s power bloc. The event was dedicated to the defence of Belarus and was planned beforehand. It is symbolic that it coincided with the beginning of a new training year in the Armed Forces. 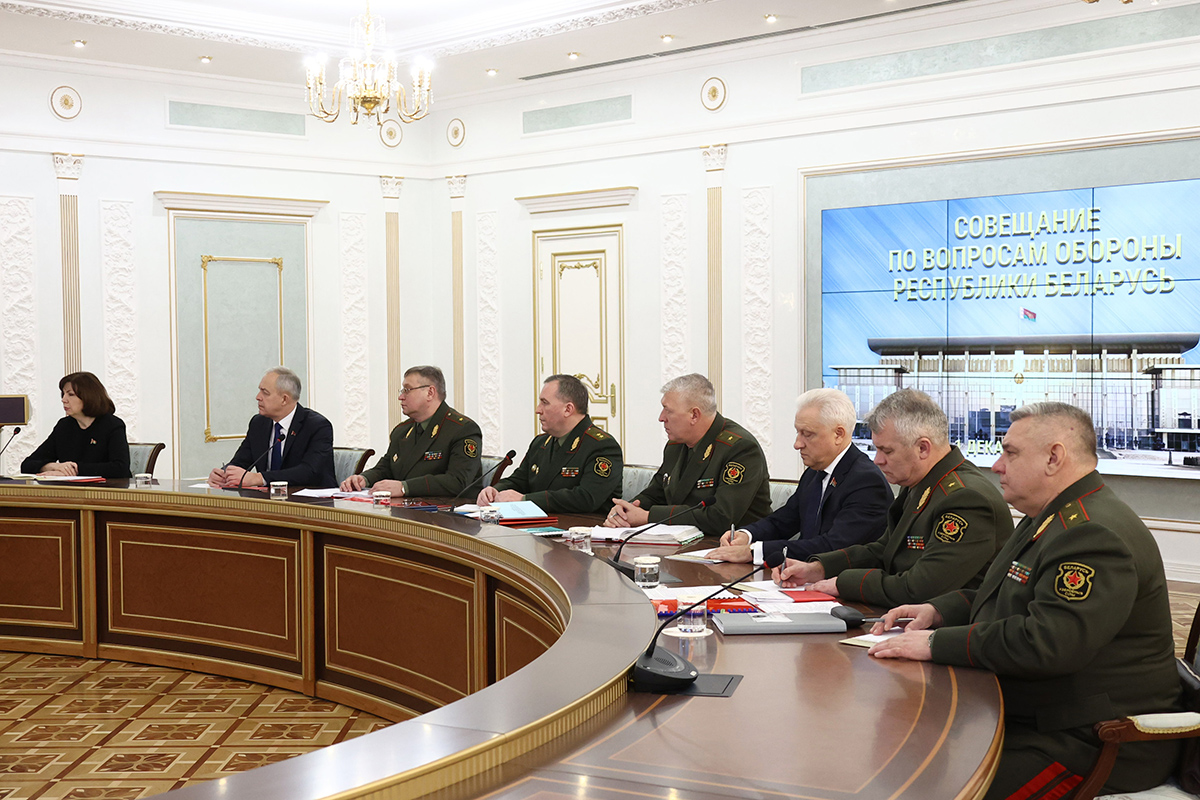 Aleksandr Lukashenko drew attention to the need to take into account the experience of modern military conflicts. The President emphasised,

“We must constantly monitor, see and by no means miss the signs that would indicate the direct preparation for aggression against our country. Today we need to take a look at what has already been done to protect the state, and to identify the direction in which we need to move further. I have always repeated, and I would like to say it again: lessons, lessons, and lessons. Our most important task is to draw lessons from what is happening along the perimeter of Belarus.”

According to the President, all law enforcement agencies have noted an increase in the number of provocations near our state border, “Ukraine is using any pretext to draw the troops of the NATO member states into the conflict. The recent missile incident in Poland testifies to the fact.”
The West is openly demonstrating its aggressive intentions today. This is also used by some representatives of the self-exiled opposition, who openly call for the seizure of power by force and the commission of terrorist attacks on the territory of Belarus. Aleksandr Lukashenko speaks directly about them, “Some of them are not just traitors, but extremists. There is no other name for them. They do not hesitate to call for strikes targeting the infrastructure of our country. They have even forgotten that their relatives live in Belarus.”
Amid these circumstances, Western states continue to build up the military potential of their armed forces, modernise infrastructure in the neighbouring countries, and increase the intensity of operational and combat training activities, the President said.
“All this leads to the aggravation of the already complicated military and political situation around our country and in the region in general. So far we have managed to restrain the possible enemy from using military force against Belarus. Nevertheless, we must constantly monitor, see and by no means miss the signs that would indicate the direct preparation for aggression against our country,” emphasised Aleksandr Lukashenko.
Defence Minister Viktor Khrenin noted during his report: in accordance with the instructions of the President, the ministry has identified, planned and implemented priority measures to prepare for repelling aggression. Since March, the country has been implementing measures aimed at increasing the readiness of the Armed Forces of the Republic of Belarus to respond to challenges and threats to military security.
In addition, the Head of State approved refined approaches to the development of the Armed Forces in seven main areas for the next five years in May, taking into account the current situation and an assessment of the experience of military operations in Ukraine. During the event, it was considered what has already been done to protect the state, in which direction to move further, what additional decisions are needed at the level of the President. Given the particular importance of answering these questions, the meeting was then held behind closed doors.
In an interview with journalists at the end of the event, Viktor Khrenin highlighted how much attention the President pays to the military security of the state amidst the developments around the country. Defence Minister noted that the situation around Belarus is escalating. At the same time, Viktor Khrenin specified, “I don’t want anyone to think that a war would start tomorrow. And the President emphasised that there are no direct preparations for a war. Seeing what our neighbours are doing, we, naturally, are obliged to respond to what is happening and prepare our Armed Forces, our state for defence, first of all. We are not going to threaten or attack anyone. We want to live independently on our territory, make decisions, respect our sovereignty, independence, and territorial integrity.”
Defence Minister also said that they discussed the implementation of previously adopted decisions and analysed the accumulated experience at the meeting, “We have presented a detailed report on what is being done. We have looked at it again in order to make sure that we have not made any mistakes. Indeed, we are well aware that if we now join an arms race, as some states are doing, we can create problems for our economy and cause some social problems. Therefore, the principle of reasonable sufficiency should be at the core of our efforts. And the Head of State emphasised that this should be the only criteria. There should not be any extravagance or overspending in any case. In this situation we must primarily rely on our own resources, on our capabilities to defend our country on our own.”
The journalists asked the head of the defence department how NATO and the EU countries consider Ukraine’s attempts to draw alliance members into the conflict.

“There is only one beneficiary in this story around our country and in world politics, and we are already seeing this. It’s only the United States. It is trying to weaken Russia, it is absorbing the European Union and already brought the Ukrainian economy to its knees. This is the main beneficiary today,” Viktor Khrenin noted.

As for provocations near the Belarusian border, the minister also sees them as an attempt to draw the country into the conflict, “We understand this and, of course, we will respond to these provocations. We reserve the right to response to them in the way we see fit… We are making significant changes to the plans and programmes of combat training of our servicemen.”