Parish of the Church of the Ascension of the Lord was organised in 1996 in the agricultural town of Zhdanovichi. There was no temple yet, but divine services were already held in the temporary premises of the former Krinitsa sanatorium medical building. At the beginning of the 21st century, it was decided to build a new church with the blessing of His Eminence Filaret, the first Patriarchal Exarch of All Belarus. The decoration is almost finished today. The correspondent learned about the ancient icons that helped raise funds for the construction, as well as about the extraordinary project of the church and its distant origins. 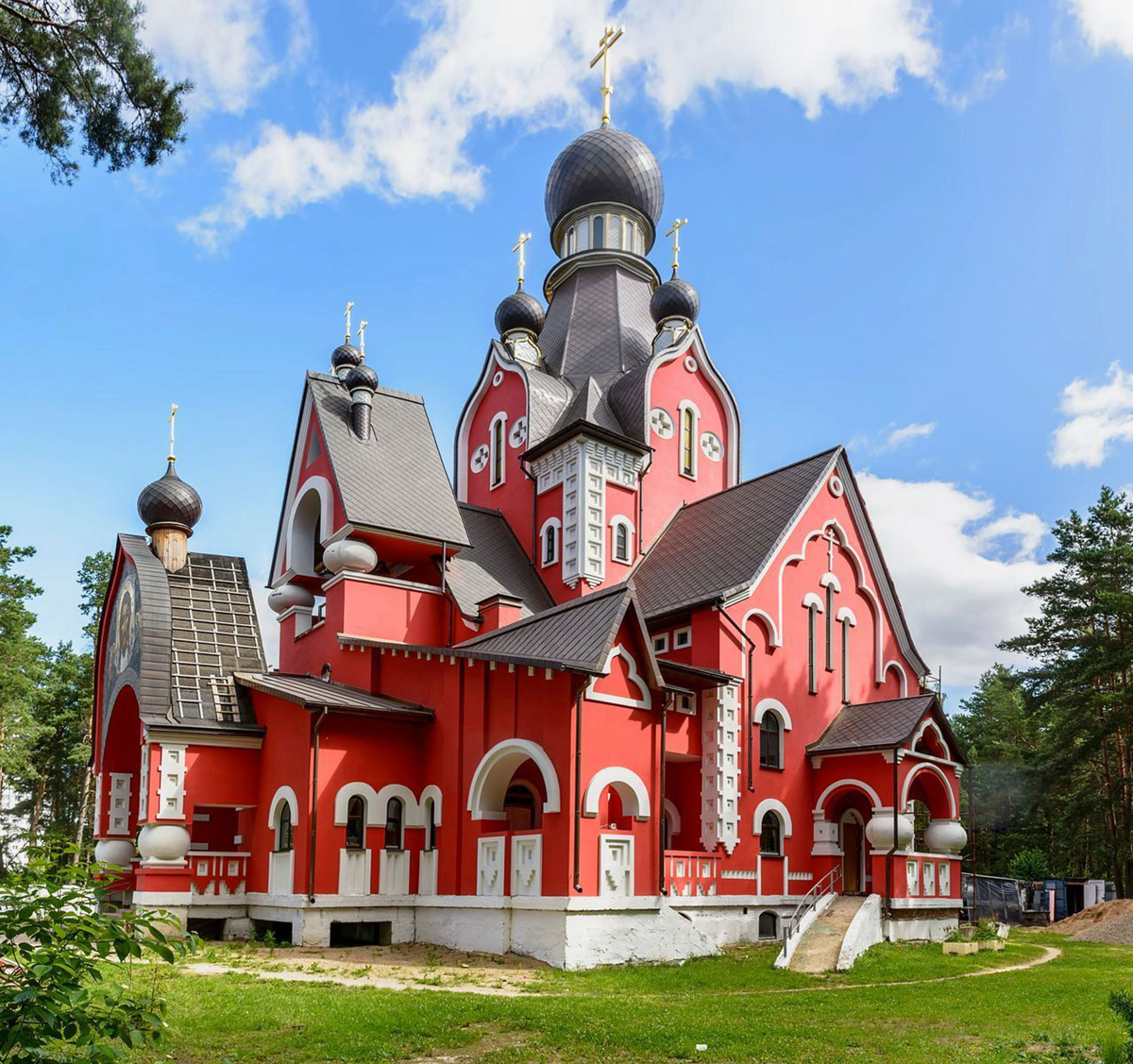 
With tears and prayers 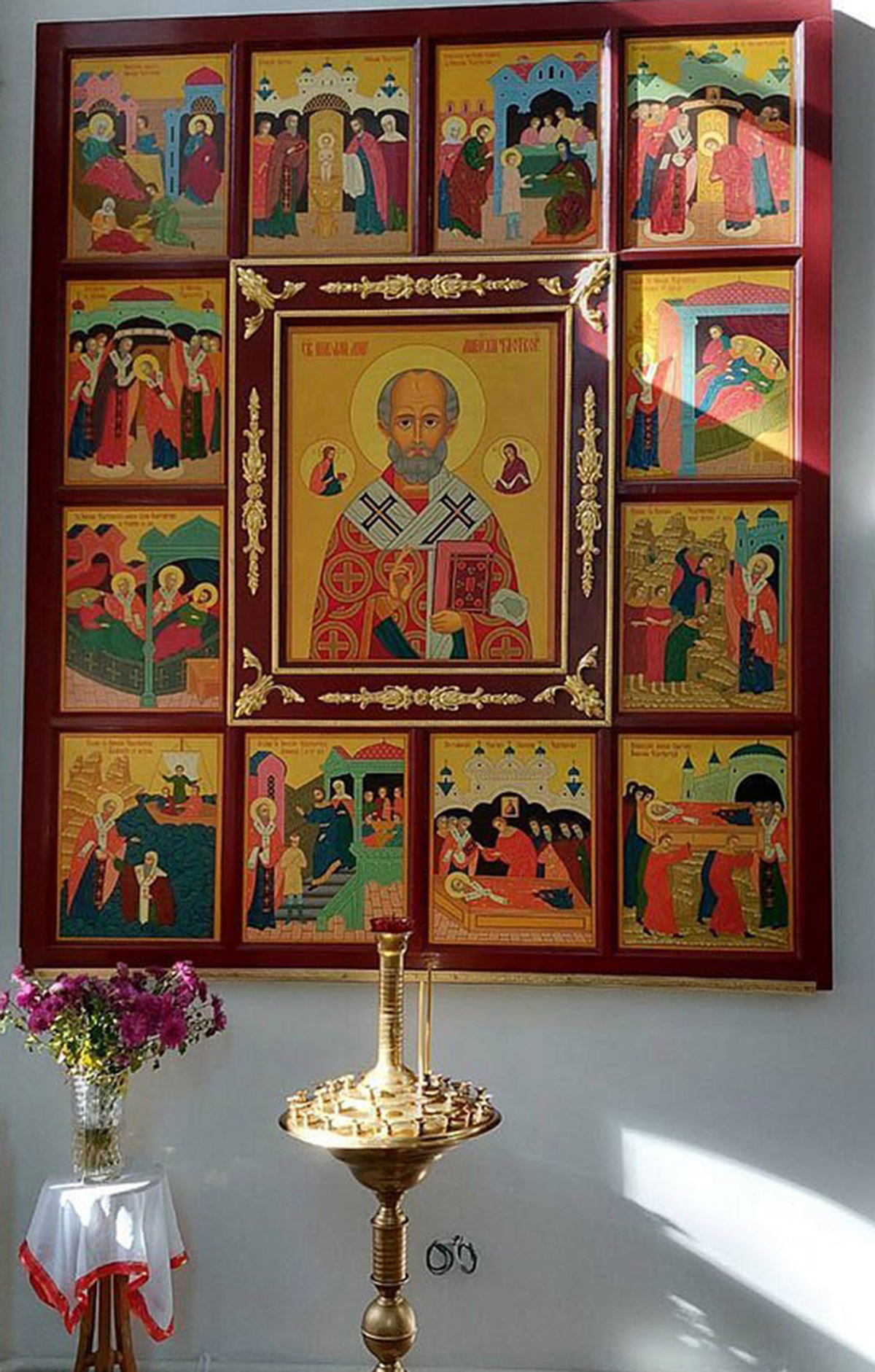 Photo: www.tripadvisor.com
“What church will you build?” asked Metropolitan Filaret, the first Patriarchal Exarch of All Belarus.
“A small one, I guess. We don’t have a penny,” replied parishioner Vladimir.
“Then you certainly need a big church,” promised His Eminence.
In 2005, the President of Belarus allocated a land plot in the village of Zhdanovichi, Minsk Region, by his Decree No. 144 for the construction of a new Church of the Ascension of the Lord.
An interesting fact was captured on the photograph. There wasn’t even a brick. A worship cross was erected on the site of the future church on that fine day. The faithful who installed it remember that the sky was clear as well as the air. However, one can see how the cross was enveloped in a cloud in the photo.
“As if the Holy Spirit came down and blessed the undertaking,” believes Vladimir, a parishioner who has been involved in the construction since the very beginning.
The believers moved to a new building when there was still no finished roof. But there was joy that the church was being built.
“It flowed from all corners, and we served and rejoiced. Sponsors donated, ordinary people. They built a temple with tears and prayer, and by the miracle of God. My husband used to say that the more you humble yourself, the better it turns out later,” recalls mother Nina, the widow of the former Father Superior Dmitry Vetoshkin.

On the way to the Minsk Sea, a steepled Church, red like an Easter egg, emerges out of the needles. The colour is symbolic, because the feast of the Ascension of the Lord is part of the Easter cycle.
A mosaic of the image of the Saviour above the entrance is an integral part of the temple. Expensive and complicated decoration was donated by the parishioner Andrei. The project is about to be completed. Masters almost finished the left side-chapel. They do their best to finish it before the patronal festival. A symmetrical cross is formed, when the sun hits the stained-glass windows under the dome. It is planned that the temple will be decorated with murals in the future. 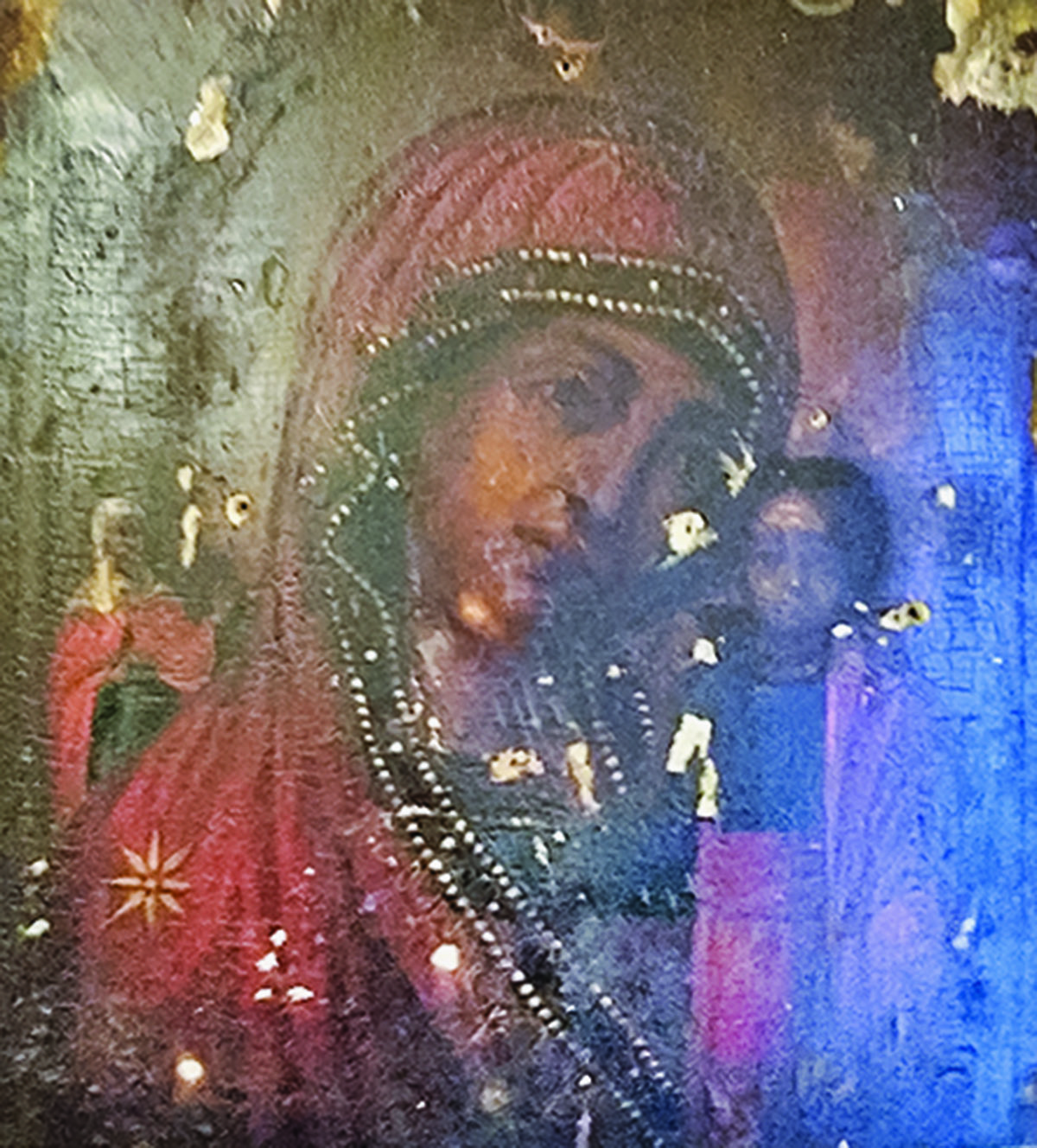 There isn’t another church like this in Belarus. However, the same church is located in the village of Jordanville, New York. It has the same colour — yellow and green, and is dedicated to the Trinity. In the 30s of the last century, it was built by a Grodno peasant, monk and priest Pyotr Nizhnik with funds from the found treasure.
“Patrons who helped in the construction suggested the idea. They visited the church of Pyotr Nizhnik,” tells the Father Superior of the Ascension of the Lord parish Aleksandr Gatsko.
In 2006, the parish was given ancient icons of the 17th-18th centuries confiscated from smugglers at the Brest customs.
Mother Nina demonstrates images tarnished with the time. Among the images are: Saint Seraphim of Sarov, Vladimir Mother of God, Saint George. The Our Lady of Kazan icon obviously endured the battles. It has traces of fragments or bayonets. Mother suggests that this image belonged to a family, “On the icon, Tatiana of Rome emerges out from behind the shoulder of Mary, mother of Jesus. A very rare case. Rich people ordered images of the Mother of God, Saint Nicholas and saints with the same names as those of the household to the family. Here, for example, is the cathedral icon of saints, which also seems to be one of those. They are sacred. It is felt that they made many miracles back then.”
One of these happened in front of the parishioner Vladimir. The parish participated in international spiritual and educational exhibitions and fairs with images. The holy images helped raise $100,000 at one of the expositions in Brest.
“At the same time, we began to carry out the ‘named brick’ campaign at the exhibitions of ancient icons, when a name is written on a brick for a symbolic amount, and then it is laid into the wall of a temple under construction. Moreover, one can donate for a nominal brick on one’s own behalf, for his or her relatives and friends (living and deceased). Thus, each donor became the direct builder of this temple. The Father Superior and parishioners of the Church of the Ascension of the Lord will always commemorate donors and benefactors, patrons and sponsors with gratitude in prayers,” recalls Vladimir.

In addition to regular local parishioners, the Church of the Ascension of the Lord is visited by guests from different parts of Belarus, Russia, the CIS countries, vacationers of the Krinitsa, Belorusochka, Lazurnyi, Praleska sanatoriums, as well as residents of the Republican Residential Care Facility for Veterans of the Great Patriotic War and Labour. 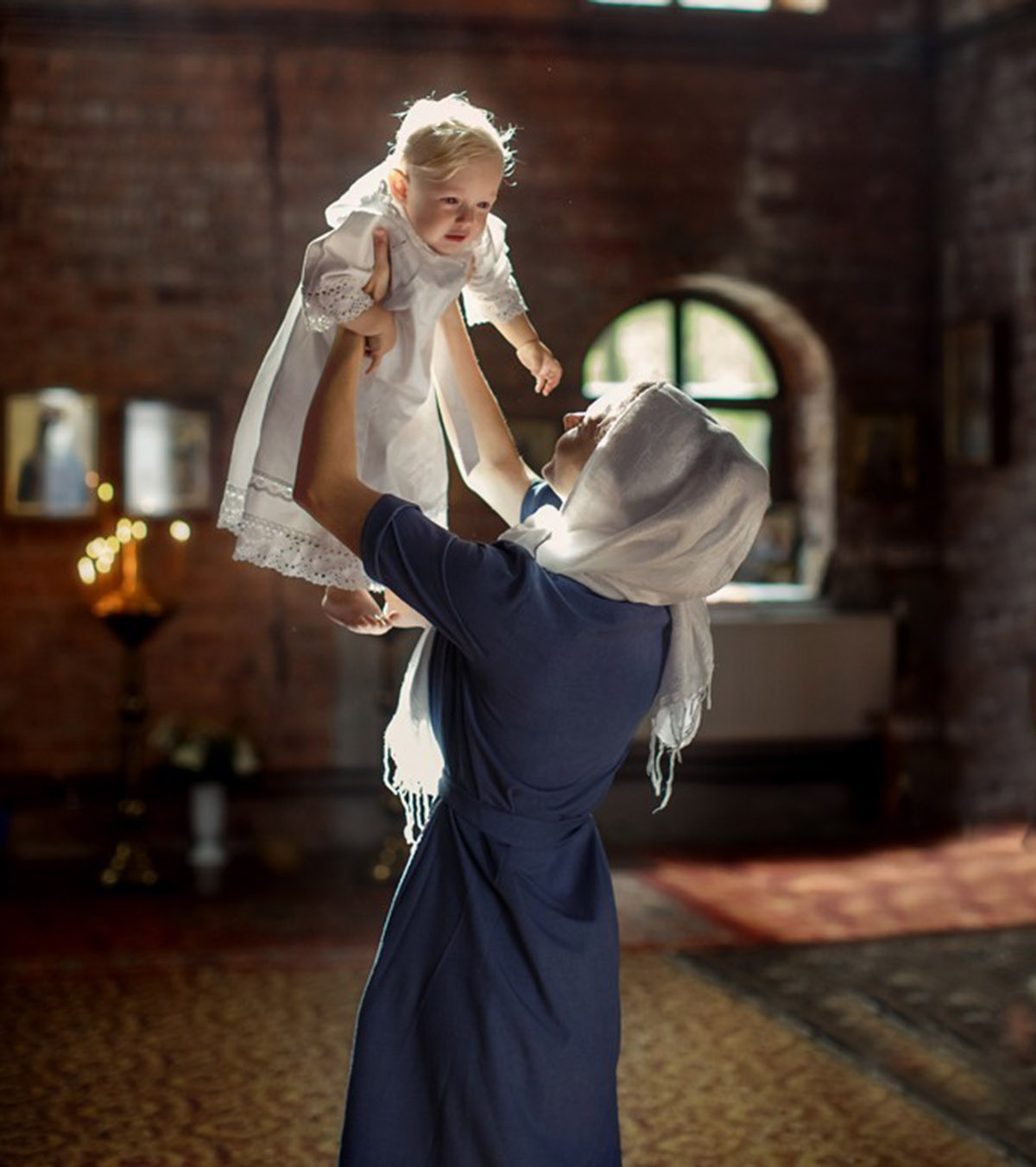 In 2004, some parishioners united in a sisterhood in honour of the holy righteous Juliana Olshanskaya, which collects voluntary donations for the construction of a new church, helps lonely, sick, elderly people, large families and the needy.
Previously, before the repair work, prayers with water blessing, spiritual conversations, sermons were held in the Belorusochka sanatorium for mother and child. There is also a prayer room. After the repair of the sanatorium, social service will resume in it. The Sacraments of Confession and Communion of veterans, spiritual conversations, and sermons were also held in the Republican Residential Care Facility for Veterans of the Great Patriotic War and Labour. The choir of the temple went to the residential care facility with concerts. The pandemic has changed a lot. However, the social work in the parish continues even today.
The church has a Sunday school. It has over 20 students. Vocals, drawing, Old and New Testaments are taught here. The priest gives talks about faith at the Solnechny sanatorium on Thursdays. More than 5,000 copies of books, audio and video products are in the church library fund, which is planned to be placed in the basement of the new church. A permanent exhibition of old images is also organised there.
“Why’s it going so slowly?” people asked mother Nina many times.
“How could we build quickly? Everything happens only with God’s help,” my interlocutor is sure.
A children’s playground was organised on the territory of the temple. It’s not just for churchgoers. The villagers come here as well. Father Superior Aleksandr believes that it will be possible to paint the temple and restore ancient icons not only with the help of God, but also by the efforts of people. The new church needs new parishioners, their participation, work and prayer.