Any absolutised statement is always perceived with a degree of scepticism: they say, well, don’t impose your opinion on us, we weren’t born yesterday, we understand the situation and are able to think on our own. However, there are exceptions in any situation. Aleksandr Medved is proof of this. Belarusian sport is rich in glorious victories and unique personalities, but even among them, Aleksandr Vasiliyevich is a full-fledged master, he is like a true bear in a big forest. The brightest. Outstanding. Unusual and noticeable person. The same absolute. And hardly anyone will argue with this statement. 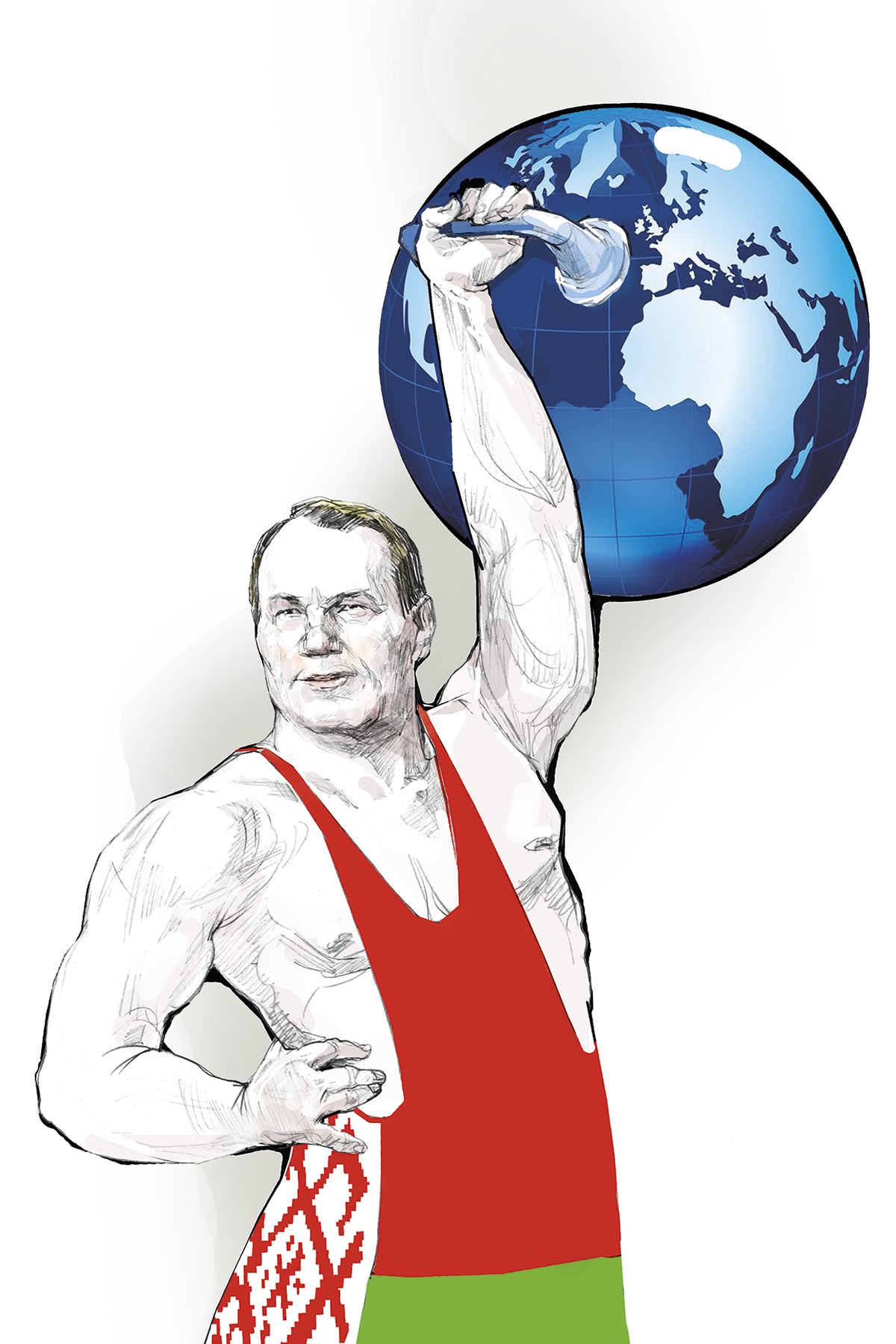 The Belarus Segodnya Publishing House cordially congratulates Aleksandr Medved on his jubilee.
We decided to present this friendly caricature as a gift to a respected athlete.

The point here is not only in endless titles, titles, victories and awards. Not even in the indisputable and unshakable authority that Aleksandr Medved enjoys in world sports (our outstanding wrestler is literally worshiped in the USA and Europe, and in Iran, Turkey and the Caucasus he is literally considered a celestial). His last name means bear in Russian. And Medved is epic. He is a living legend. There are so many stories, tales, true stories and tales regarding his name that it is impossible to treat this colossus only as an athlete. That would be wrong because he is a multifaceted, versatile and limitless figure.

In a way, Aleksandr Medved is our Hercules, the main and most beloved hero of the Belarusian Olympic pantheon.

Ten years ago, we met with him at least once a week — now we were preparing the All Life Is a Struggle several times reprinted book of memoirs. Memories poured out of him like an endless full-flowing river in a modest closet on the second floor of the third building of BSUIR, where Aleksandr Vasiliyevich headed the sports department for many years. More than once I had to be amazed: how could so many events, stories and incidents be related to just one life? How much strength and unbending will he have, what an iron character. During the conversation, Medved invariably treated guests with sweets and honey, and at parting he liked to pour a glass of cognac (he always had an excellent one — his friends brought it from Dagestan). He smiled, shook his hand, and every time this steely grip made me remember his words, “My powerful and tenacious hands are the merit of the ax, with which I was inseparable in childhood, and the thousands of mighty oak stumps that I split with them. More than once I mentally thanked those stumps and that ax when I grabbed my opponent on the carpet with a death grip, saw the surprised arches of his raised eyebrows, and also a helpless look under them. ‘That’s it, comrade, now you won’t go anywhere’ — my eyes smiled back and we both knew that I was right.”

A three-time Olympic champion, a multiple world champion is still in service today: he constantly visits the training camp of the national team in Staiki, prompts, tells, shares his experience. He teaches athletes despite his 85.

He never tires of emphasising that Mother Nature generously rewarded him with physical data, but without hard everyday work and self-torture in training he would never have become a true bear. Everyone who knows him or just read numerous interviews has a favourite story about Aleksandr Vasiliyevich. Someone likes to remember the roots of our hero: his grandmother, who wore boots of size 45 and was about two metres tall, and his grandfather — a powerful, stocky old man, a carpenter who made a 50-litre wooden tank, hung it on a huge shaft and carried water from a stream that flowed two kilometres from the house. There are several stories about Medved, they are so popular that they have become jokes. At the factory (where he got a job as a sixteen-year-old youth), he spoiled a dozen locksmith pliers, inadvertently breaking iron like foam plastic, unable to cope with the strength of his overworked brushes. Or the tank school in Uruchye and Lieutenant Ivan Kotsegub, who considered himself a master of combat, but then a skinny recruit scooped him up in a couple of seconds and stuck his head into the carpet. The defeated opponent received a great respect from the listeners of his story, when years later he told everyone that he fought bravely with a true bear. Especially when he specified that it was not with a brown and forest bear, but a champion. No wonder, because he often heard the ‘Are you a true Bear?’ question. Aleksandr Vasiliyevich always answered with his signature squint, “A true, but only without wool.” Well, who hasn’t heard the epic story about the 1968 Games in Mexico City? The Belarusian Bear knocked out his thumb so that it appeared in a completely strange position. Nonetheless, he refused medical help and set it in place himself with a crunch during a fight with the formidable German Wilfried Dietrich. Right there, right on the carpet. Everyone became moon-eyed, except for our champion. The bear, he is the bear — a predator for which rivals have always been prey.

It is very easy to talk about Aleksandr Medved, because his whole life is woven from sports exploits, adventures, myths and legends. At the same time, it is incredibly difficult to write about it: how can one be able to grab the main thing from all this fascinating diversity, without spilling the essence?

Personally, I see it in these words of a wise champion wrestler, “Every moment, every day is a separate life. Any fight on the wrestling mat contains a cosmos of experiences and hopes, and in its foundation there is still the sea of sweat and work. We often live life without actually noticing it, but here it is, take a closer look — and you will see, you will feel it. Don’t live tomorrow. Don’t live yesterday. Live here and now. Work hard, honestly and conscientiously. And remember, everyone can become a great champion, but in your own direction.”


Aleksandr Lukashenko congratulated the three-time Olympic champion in freestyle wrestling Aleksandr Medved on his 85th birthday
“You gave us unforgettable emotions with your bright and sparkling victories. As a coach, you made a significant contribution to the development of freestyle wrestling. Moreover, you confidently represented Belarus at international venues as a recognised sports legend and a well-known public figure,” congratulations says.
The Head of State noted that Aleksandr Medved, an outstanding athlete, respected mentor and true patriot, rightfully holds the most honourable place among the great champions of Belarus, from whom the youth takes an example.
The President wished the hero of the day health, optimism and good spirits.
According to the press service of the President of Belarus