The women’s beach soccer team of Belarus showed itself

Beach soccer is good and colourful in itself: a very exciting and dynamic sport. And when girls play, it also acquires a unique charm. It is impossible to take your eyes off what is happening! The national teams of Belarus and Russia played two friendly matches at the Olimpiysky National Beach Football Stadium in Minsk, giving the audience a sea of emotions and aesthetic pleasure.

Well, the heat is real! Even just sitting in the stands for an hour under the scorching sun these days is not the easiest thing to do. And it is still worse when you have to run on the sand! And not at a light trot, but at full power. And keep a proud posture at the same time, not forgetting the grace of forms, because girls always remain girls. Even when the battle is fierce.
The men’s beach soccer team of Belarus is known far beyond the borders of the country for its results: the guys managed to make some noise, seriously declaring themselves both in Europe and in the world. Under the guidance of Spanish coach Nicolas Alvarado, our team played brilliantly at the 2nd European Games in Minsk, and in November last year, it shone in the Euroleague, winning silver. A lot of attention is paid to the development of this sport in the country, the championship of Belarus is held, there are specialised arenas in Vitebsk, Mozyr, Borisov, Molodechno, Slonim, Kirovsk, Shchuchin... But until recently there were certain difficulties with the women’s direction in this sport. Even now we don’t have women’s beach soccer teams, but there is a team made up of representatives of big and mini-football. It looks, I must say, very colourful, the prospects, judging by the game in fights with the Russians, are very, very encouraging. 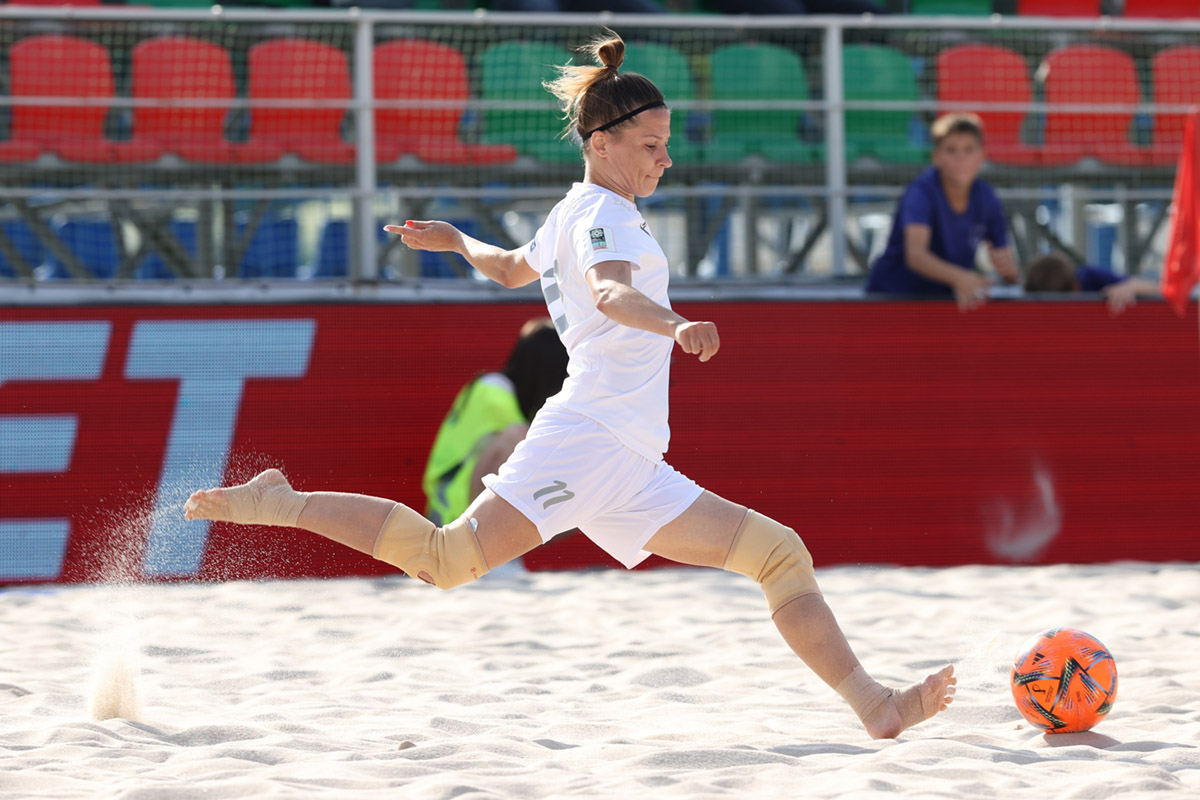 The Russian women’s team is the reigning European champion, it is rightfully considered one of the strongest teams in the world (it ranks second in the ranking of the best teams on the planet). They hold the national championship every year, and its level is also very high. Testing oneself in a battle with such a seasoned opponent is an interesting business, and extremely exciting. And Nicolas Alvarado, who boldly led the women’s team of Belarus, looked in this respect almost like Comrade Sukhov from the White Sun of the Desert movie, who, by the will of circumstances, decided to get involved in a severe battle with Abdullah’s gang. Of course, you remember that line-up: Zarina, Jamilya, Guzel, Said, Hafiz, Zuhra, Leyla, Zulfiya and Gulchatay. There are many more beauties in the ‘battalion’ of Alvarado, each has every chance of becoming the favourite football player of all Belarusian fans. 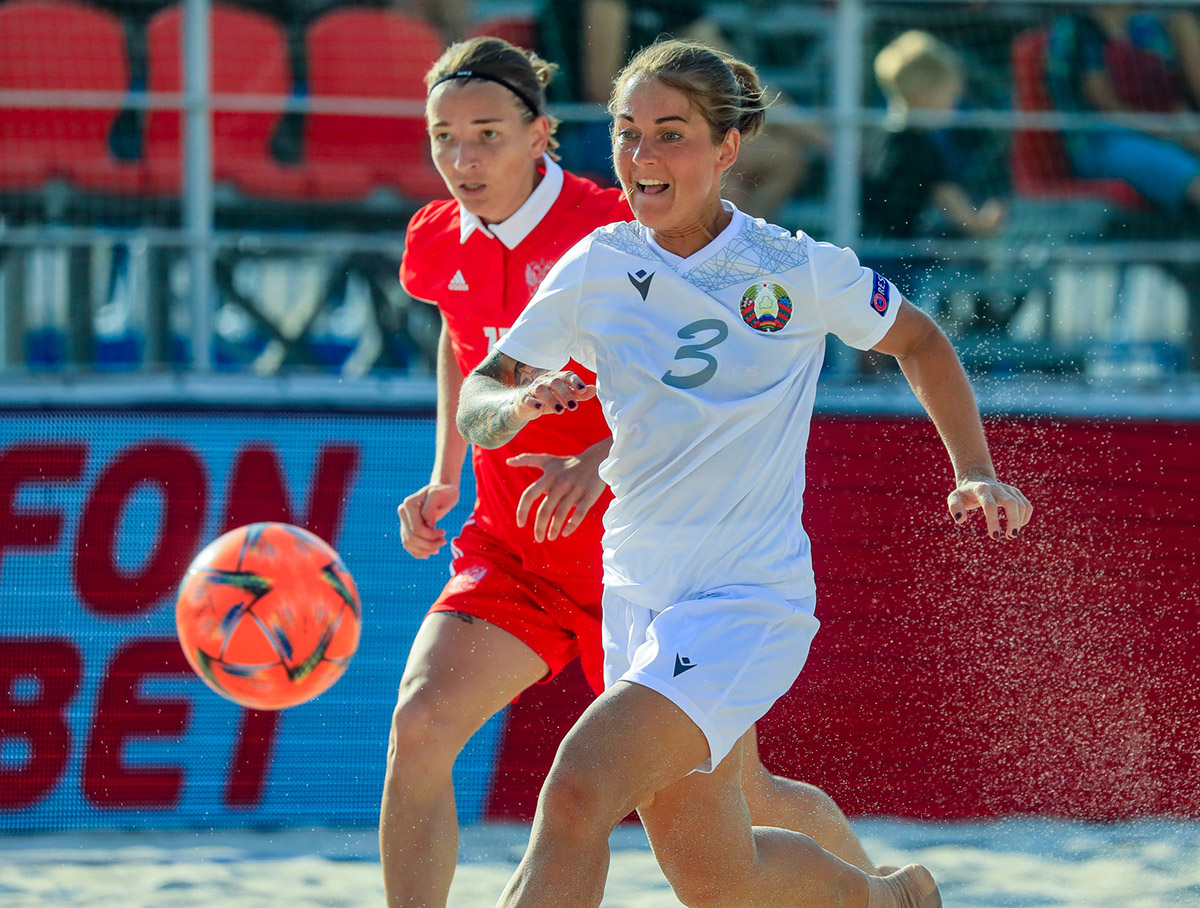 Of course, it’s too early for us to compete with the Russians. Anna Chernyakova alone is worth the whole team there. She is a real star of the world beach football, and Varvara Bychkova with her inimitable dribbling is the beach Lionel Messi! Nevertheless, the Belarusians fought as best they could, and certainly no one was ashamed of the game. Daria Zaiko played reliably at the goal, and Valeria Kharitonchik, a scorer who almost never leaves the field without a goal, performed the main part at the opponent’s goal. Valeria distinguished herself this time too, effectively hitting the gates of her rivals after a masterful pass by Yekaterina Chayuk. You can make a movie about Yekaterina’s path to big football. As a child, instead of a volleyball, she was mistakenly given a soccer ball for her birthday. The boys from the yard rejoiced most of all at such an incident. With them, Katya began to chase the ball, and she got so carried away that, to the horror of her parents, that she quit choreography classes, deciding to become a football player. Then there was a long and thorny road to a dream, for the sake of which the girl travelled every weekend by minibus from Rechitsa to Minsk (4 hours on the way) at her own expense to play a mini-football match (60 minutes) and return back (4 more hours). Luck and success love the persistent and stubborn: she was noticed, invited to a professional team. Today, Yekaterina Chayuk is the leader of the Minsk Slavyanka team and is mastering a new direction: beach soccer. Where, too, as we see, she plays a significant role. 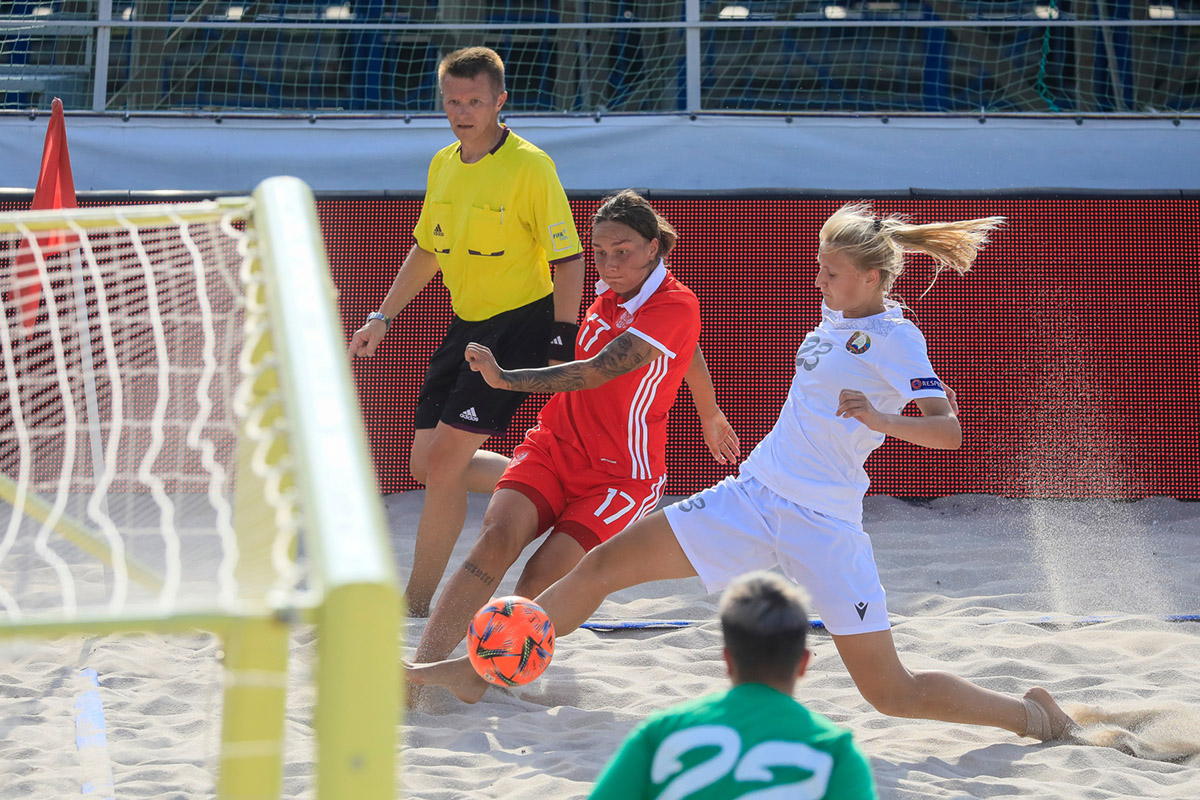 Christina Baygot travelled 130 kilometres four times a week for training (the distance from Shchuchin to Grodno is 67 km). The love of football overcame all difficulties. Her father, a master of sports in kayaking and canoeing, once became the champion of Belarus, her mother is also fond of sports, her brother Artyom plays for the Shchuchin club, one of the leading in our beach soccer. In addition to playing football, Christina also shoots it: her colourful photos can be found on many media.
Well, the most experienced in the team is Polina Shatilenia. She is the best football player of Belarus in 2018, was the captain of the women’s national team, won the Belarusian championship with Minsk, won the Cup and the Super Cup of Belarus, and played in the Russian championship.
There are many specific nuances in beach soccer, and therefore it is very difficult to immediately switch from grass or parquet to sand. However, even with the naked eye it is noticeable that the girls, under the strict guidance of Nicolas Alvarado, noticeably add in skill, and most importantly, they act with a twinkle and sincerely, with full dedication. In the match against the Russians, our team opened its face and showed itself from the prettiest side. I want to root for the girls. And there will definitely be success.