Will Belarus block YouTube and foreign social networks?  Who should be supported in the media field?  How will the media advertising market develop further?

These topics were discussed at a meeting with the President, dedicated to current issues of the media. It was about the tasks that must be solved today in the information sphere.

“A global information warfare is going on, and we became part of it against our will. No matter how difficult it is, you must not only keep the attention of the audience, educate, explain, support, but also think about your own development,” the Head of State said.

One of the topics of the meeting was a draft decree regulating issues of advertising in the media, which was submitted  for consideration to the Head of State. The draft decree had already been considered several times from various sides by the government and the Belarus President Administration. A domestic media measurement system has recently been launched in the country to ensure market transparency; a register of advertising distributors has been created. 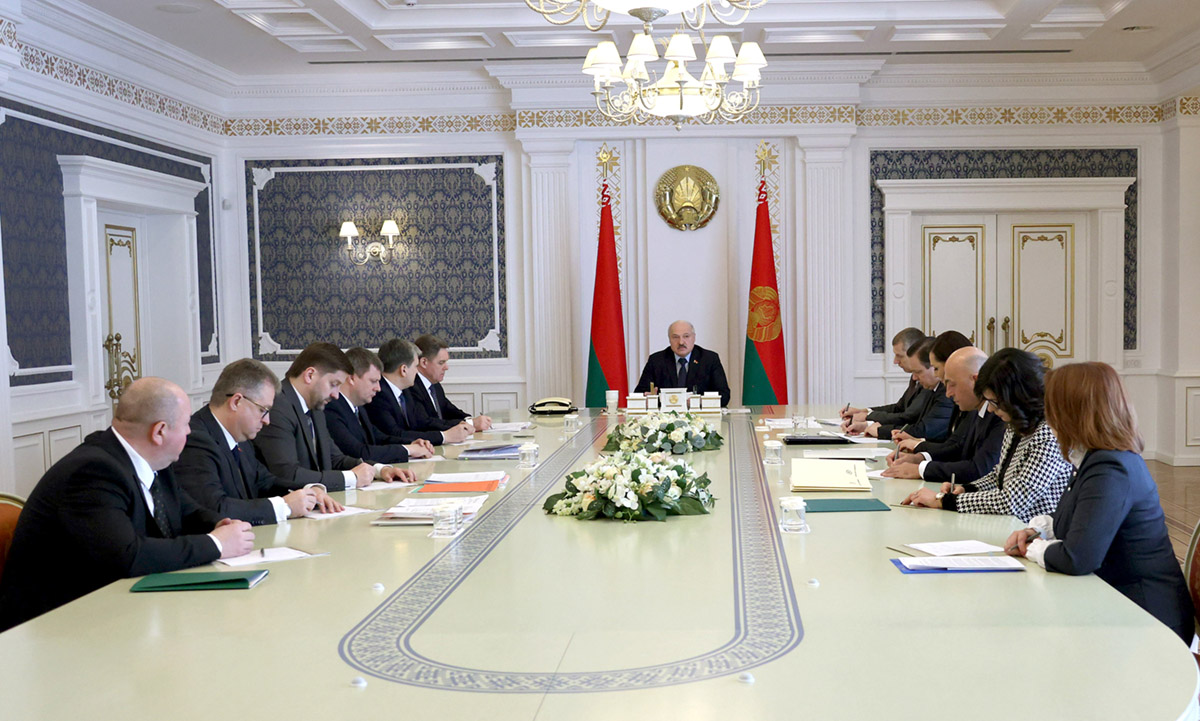 “The situation has changed dramatically, and not for the better. As a result of the current geopolitical conflict, Russia and Belarus were subjected to a new barrage of predatory sanctions,” the President emphasised.
Aleksandr Lukashenko noted that he got the feedback from ordinary people who criticise the presence of advertising in those outlets that previously opposed the state, “I will say directly: advertising should be on patriotic channels with pro-government positions that protect the state, that work to keep peace and order in our state. We have Pervy, ONT, STV and Mir channels, SB. Belarus Segodnya newspaper, as well as other newspapers and magazines… So advertising should be placed in these mass media rather than in some rabid outlets who sought to destroy the state and continue to do it successfully grinning from abroad.”
The President gave his take on propaganda activities of mass media at a meeting. The Head of State noted that propaganda is part and parcel of mass media and this should neither be denied nor feared, “Propaganda has always been and will be, but we need to propagate the best. We have enough of it… We just need to propagate not fake news and various rubbish. You see, we are in a unique situation: I do not want to offend other countries, but we are the only civilised country that looks decent.”
According to him, the state-run media in Belarus convey the truth without embellishing information,

“We have enough newsworthy events and facts to present honestly and reliably to the entire global community, not only to our public. Let them watch and envy. You see how roughly they are fighting against us. They are demonising both Moscow and Minsk in front of the rest of the world. Even Sharp and Goebbels have already been outdone.”

The President drew attention to the outpouring of the most brazen and wild lies on the internet, “All decency has been lost. No one cares about journalistic standards, professional responsibility anymore. This is a full-scale information warfare — for the minds of our people, for the future of children. We cannot lose this war. We are not supposed to lose it unless we make big mistakes.”
Aleksandr Lukashenko urged to work more with personnel and to develop human potential, “It is important, while keeping journalist teams, to look for new people — young, creative and, most importantly, patriotic. Thus we will ensure the continuity.”
At the meeting, the President spoke about the possibility of blocking YouTube and foreign social networks in the country.
“Of course, theoretically we could block major outlets such as YouTube, some social networks as Russia did it, or we could put up a ‘golden shield’ as in China. Anytime. Nevertheless, before we take a step, let’s weigh all pros and cons of what will come out of it. If what they are doing there is harmful or will be even more harmful in the future, then let’s take this decision. If it has not yet come to this, let’s wait and see. Let’s not rush,” the Head of State said.
The President pointed out that the self-exiled opposition and its followers are now pressuring citizens and trying to toy with their emotions by claiming that allegedly Belarus will go to war against Ukraine. They are trying to psychologically affect military personnel and particularly their families.
“I’ve told you one thousand and twenty times that we have no plans to fight in Ukraine. However, the topic is hot. Belarusians genetically abhor wars. Now they are trying to pick at it. We have to respond to it beautifully. Not only propaganda but also counterpropaganda was wisely talked about during the Soviet times. It is necessary to calmly respond to it but just not to make excuses,” the President stressed.
The Head of State noted that the self-exiled opposition is forming volunteer units for the war in Ukraine now.
“Then who is really fighting in Ukraine today?” the President asked.
According to Aleksandr Lukashenko, numerous reports have been published abroad on Belarus’ possible involvement into the hostilities in Ukraine. They are doing it for a reason: In this way, they are preparing the public for getting us dragged there. 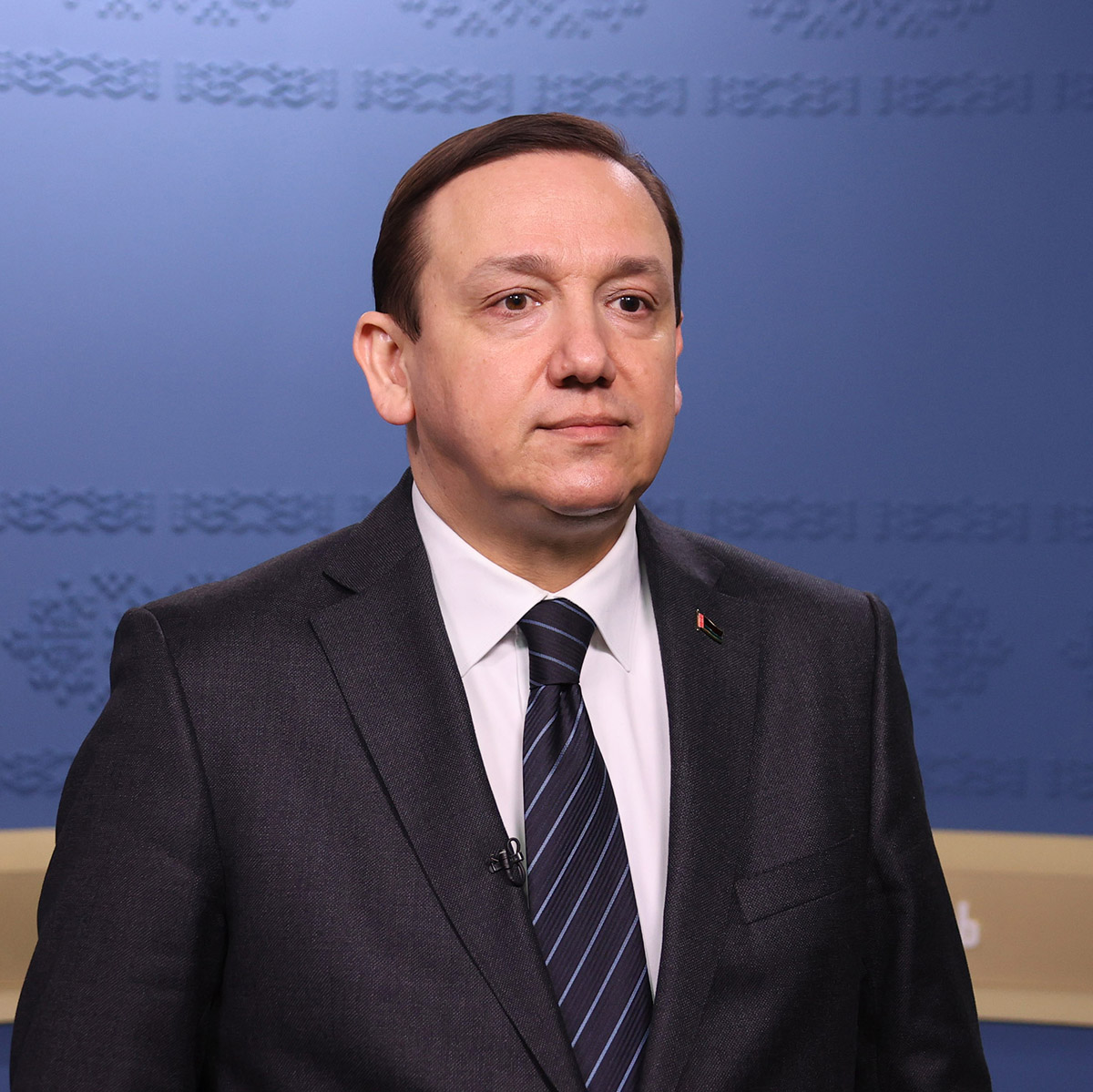 Information Minister Vladimir Pertsov on the priorities of work in the information field of the country:
• The first is to improve the quality of the information product, raising the professional level of journalists. Much has been already said on this topic, but there is still something to work on.
• The second is to ensure an increase of the share of domestically-produced television programmes. To date, the in-house content reaches 40.3 percent in the average volume of state TV channels. In the future, the target is set to achieve 50-70 percent of in-house TV products, but this depends on financial possibilities.
• The third is to promote and strengthen the state position in the Internet space, including the active development of social networks and messengers. According to social surveys, 63.2 percent of Belarusians receive information from Internet sources and 61.3 percent — from television. Every second person uses social networks.
• The fourth is to strengthen editorial offices of the regional media and to set up regional media holdings. This will enable to concentrate financial, technical, and human resources in the main editorial office, and will solve the problems of design and promotion of content in digital environments. This will result in the creation of a unified, efficient, manageable system of regional media. The work is already underway.
“Mass media outlets must fulfil the main task — to promptly convey truthful, objective information to residents of our country and abroad,” Vladimir Pertsov stressed.