Just forty years ago, people in Belarus talked about cedars with notes of genuine grief

Just forty years ago, people in Belarus talked about cedars with notes of genuine grief. After all, cedars did not grow here at all.

Till now, the Belarusian city of Vetka in the Gomel Region was famous in wide circles as the centre of Old Belief. However, during the last few decades, the district centre has developed another notable brand — the Belarusian capital of Siberian cedar. After all, here it is possible not only to see the only country’s mini-taiga, but also to harvest pine nuts. 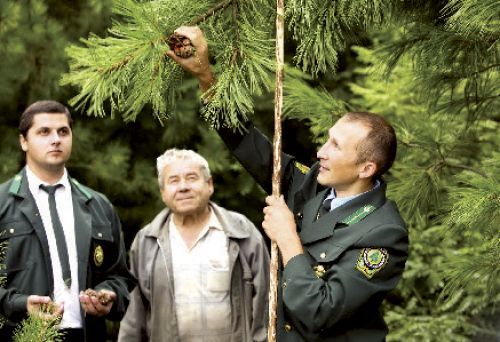 Just forty years ago, people in Belarus talked about cedars with notes of genuine grief. After all, cedars did not grow here at all. Even if it was possible to see a taiga pine among local flora, to see its cones-nuts was impossible, because in Belarus cedar does not bear fruit. But in the 1970s, Gennady Asanov, who was born in Siberia, decided to dispute this scientifically confirmed fact. At that time, he had left the Kemerovo Region where he worked as a miner and with his family grew his roots in the Gomel Region — the homeland of his wife.

I found the famous cedar-growing pensioner in a house in Yanka Kupala Street in Vetka. I saw cherries, apple-trees and grapes, but where were cedars? The owner trips down a path, pacifying his four-footed guard — the latter is bursting to go into action. However, before coming closer to the cedars, Gennady Vasilevich sits me at the table to drink tea and surrounds me with plates. Breaking my resistance, he persuades, “Try at least our new home-made honey and the cucumbers from our kitchen garden. It’s very tasty. All beekeepers eat honey only this way.”

I can only agree. I eat his cucumbers with honey, while my host slowly tells how it all started. Since he had read scientific facts about cedars which do not bear fruit in Belarus, he began to doubt it. Mr. Asanov found phone numbers of the Moscow State Forest University where cedar forests occupied 35 hectares. He called them and explained the essence of the internal dispute and asked them to send him planting stock. Soon he received a parcel with three kinds of cedar nuts: Siberian, Korean and shale procumbent cedar. He took them and went into his kitchen garden at once. He tells about that, “At that time I worked in the building enterprise in Marino village in the Dobrush District and I also lived there. I threw the seedlings into the ground on a personal plot of land and shoots soon appeared. This was in 1977. I began to notice that if nuts stick into the ground by rostel, then everything will be ok. At first, when they had not grown, it was necessary to remove any grass that was above them, because they spread their fan of needles then suddenly began to shrivel up — they were weak. But then, after five years, my cedars became stronger. In 1982, I went to Vetka foresters and told them. ‘I have seedlings — it is necessary to put them in a good place’. So they got enthusiastic about the idea and helped. me”

Thus, the taiga islet moved to the suburb of Pobuzhie village in the Vetka District. The cedar pine was surrounded by bushes on sandy ground, away from wild beasts and barbarism. Mr. Asanov regularly visited this place with a chopper in order to remove the unnecessary grass, so that it did not cover the cedars from the light. And when the trees grew roots in the new place, they didn`t need help anymore. The Chernobyl catastrophe happened at that time, but it did not prevent them from growing. Then, several years ago, a miracle happened — their first crop. Siberian Asanov worries even now, recollecting that time. “When I saw the cones, I breathed out ‘Well hello, fellow countrymen!’ After all, according to scientific data, cedars start to bear fruit 60-70 years after planting. While here, only 33 years had passed. I thought that I will not have time to see them, but it seems that they decided to thank me for my hope and hard work.”

I was late for harvesting this year and cones had been removed earlier than usual. However, I was interested why and asked some questions.

Do you wait until they fall down?

Gennady Vasilievich laughs loudly, handing over the next cucumber, saying that if you collect nuts in such a way, then you will have nothing.
The height is impressive. Our ‘young children’ are 17 metres in height, while in a taiga they can reach 40 metres. When the cone reaches the earth, almost nothing remains in it. When I was young, we tried to collect cones, climbing the trees. And then, on the branches we manually collected them, while some of them were carefully thrown down.

I look sad. I would not be able to climb a cedar, but the deputy director of the Vetka special forestry enterprise, Ivan Gorelikov, gives me news that is music to my ears. “Why climb? Nowadays we use a tower vehicle. We thought up a special device for collecting, it is like a grapnel.”

The crop is not big yet. Hardly more than two kilograms of nuts. All of them lead to the expansion of the Pobuzhie cedar grove, planting seedlings in the arboretum of forestry enterprise and the Stolbun school forestry. Gennady Vasilievich also keeps his own nursery. Changing his shoes into house slippers, he leads me into the secluded garden corner. There are two boxes, where there are tiny sprouts: small palms with hats of the former nuts.

In one box there is earth from the shop, while in another — from the bed where the cucumbers grow. They feel equally well.

However the main gain is indisputable: cedar nuts have gained Belarusian roots.