The noise of crowded stands, overflowing emotions and a desperate desire to win create an indescribable atmosphere at the matches of the Head of State squad in the Republican amateur competitions for the prizes of the President’s Sports Club. So the regular meeting with the Mogilev Region team was held at the Olympic Arena with a sold-out and a hail of abandoned pucks (7:2 in favour of the owners of the ice). The entourage did not let us down either: pop performers performed, the most active fans took part in competitions on the ice and received prizes, and according to the established tradition, the hockey players of the Belarus President’s Team thanked the audience for their support with a rain of soft toys, throwing dozens of cute plushies at the stands after the end of the game. 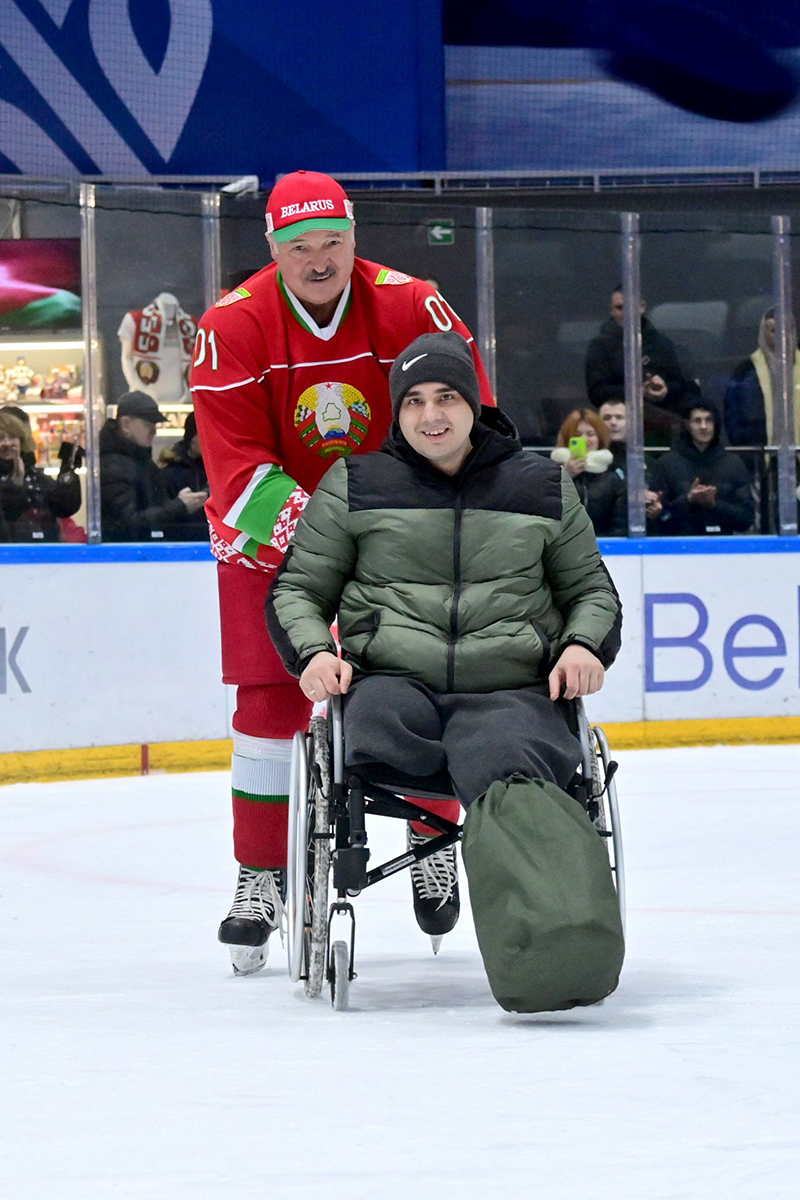 Aleksandr Lukashenko arranged a lap
of honour on the ice arena for a guy
from Donbass Pavel Prokhorenkov
Photo by BELTA
However, on this Saturday, a very extraordinary and touching event happened on the ice, which is still not tired of discussing, including outside of Belarus. Aleksandr Lukashenko took to the ice amid the thunder of unceasing applause from the public and helped a simple guy from Donbass Pavel Prokhorenkov, who was forced to be in a wheelchair after an operation, to make a lap of honour on the hockey rink. Five years ago, he decided to defend his homeland from Ukrainian aggression and, having received the approval of the girl, he left to fight. On April 30th last year, disaster struck: while performing another combat mission, Pavel blew himself up on a mine. He lost a leg. He almost lost his second one. Who knows how it would have ended if it were not for the doctors of the Minsk Regional Clinical Hospital, who performed the most difficult operation: the bones of the leg were collected like a mosaic. Doctor Alexander Kovalenko, who operated on Pavel, gives an optimistic forecast, “We expect almost complete recovery of the function of the operated limb. Then it will be possible to proceed with prosthetics of the amputated leg.” The doctor emphasised, “This is a unique case in my 24-year practice, but our department is called the Complicated Trauma Department for a reason. We deal with severe injuries after road accidents, various injuries, including mine-explosive ones. It seems to me that this time they were on top. The operation lasted all day — we had to perform a panarthrodesis of the ankle joint using fragments of his own bone as an autograft with fixation in the Ilizarov apparatus. This is a very unusual situation, like the injury itself. We had to make an effort to restore the patient’s self-confidence and hope for the future.”
While Pavel was undergoing treatment, his son Miroslav was born in Donetsk. Now the family, together with dad, is in Minsk, far from the bombings. The baby was christened in Minsk. And all the time they dream of becoming citizens of Belarus, which extended a helping hand to them and which they managed to love with all their hearts. An amazing story that once again makes us proud of our beautiful Motherland and its strong people with a very big and kind heart.