We saw how the ancient pottery is preserved in Polesie 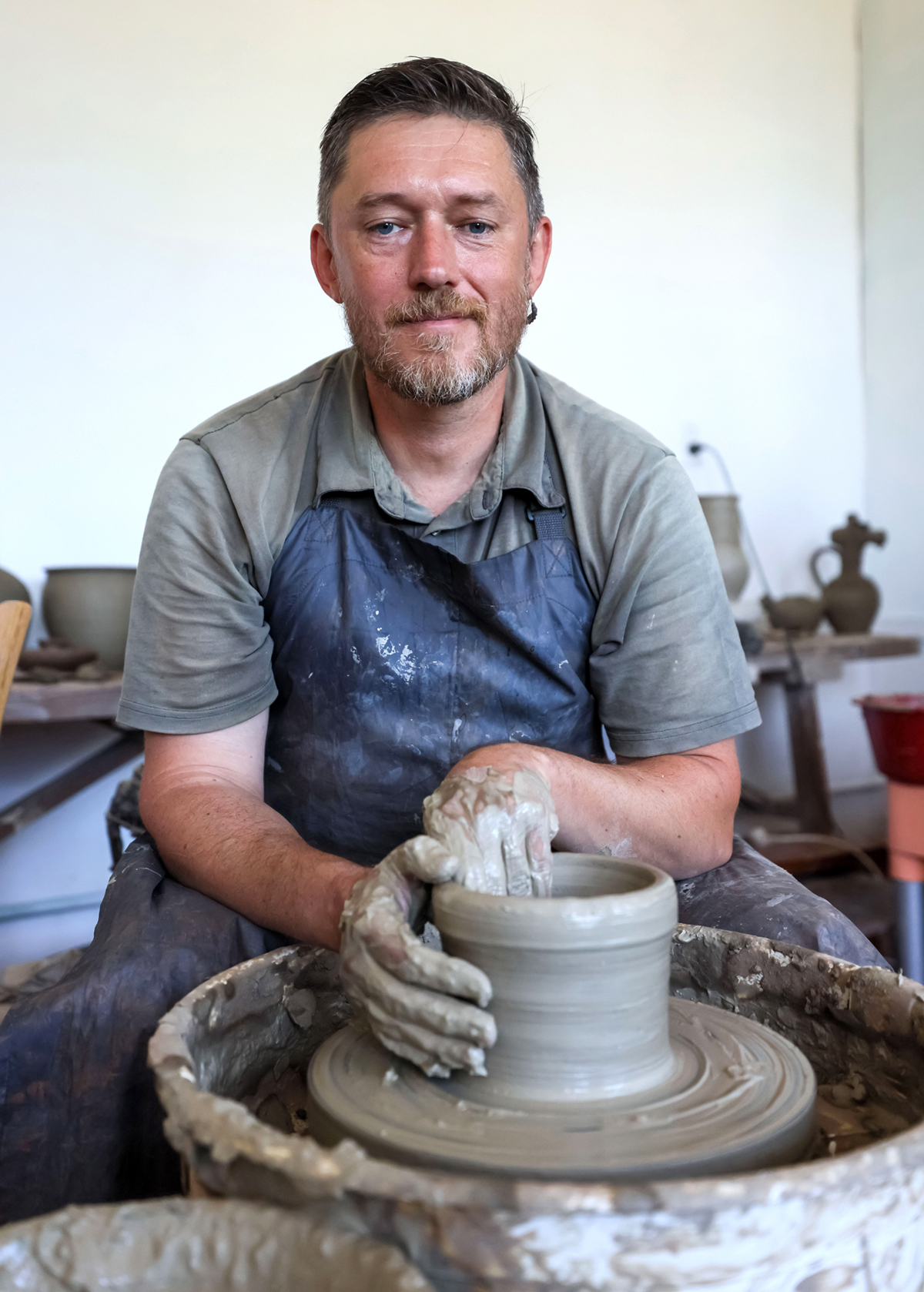 Potter Pavel Ermolenko
Zban, zlivach, semak, odinets, rynka... Each pot has its own purpose. A glechik — for milk, a banka — for wine. Polak, the largest in volume, is designed for a pood of grain. Just a litre — mamzelka, this is the smallest dishes from Gorodnaya used in everyday life… A plein-air of potters was held in one of the former capitals of pottery, the Polesie village of Gorodnaya in the Stolin Region, in which 24 craftsmen from Belarus and Russia took part. Gorodnaya has been known for its pottery since the 15th century. The local pots were sold in Vilna, Warsaw and Kyiv. In the past, the town had the Magdeburg rights and its own coat of arms, which depicts an elk with golden horns.
Pots from Gorodnaya are well recognisable. They are yellow with a greenish ‘poliva’, as the glaze is called here. And the handle, which is adjacent to the pot, forms a right angle with it. Other regions have its own technology of production.
“Clay from Gorodnaya is peculiar. It is low in iron, but contains a large amount of kaolin. The structure is strong, therefore it keeps the shape of the product and allows the craftsman to make thin walls. However, this clay is not polished as it contains a lot of sand,” Pavel Ermolenko, a ceramist from the Crimea, admits that it was interesting to work with a new material for him, he had never seen such clay before. Pavel and his wife Elena came to the Belarusian village Gorodnaya for the first time.
Tatyana Kalenkina from Orel and her daughter Maria came to Gorodnaya for the second time. At the plain-air, they molded compositions from the local clay, which they called the trees of life.
At the same time, Ivan Yakushenkov from Baranovichi and Vitaly Romanovsky from Pruzhany fantasised round about the Gorodnaya coat of arms. Ivan moulded elk from small to big, and Vitaly entrenched elks in the form of handles to the pot. 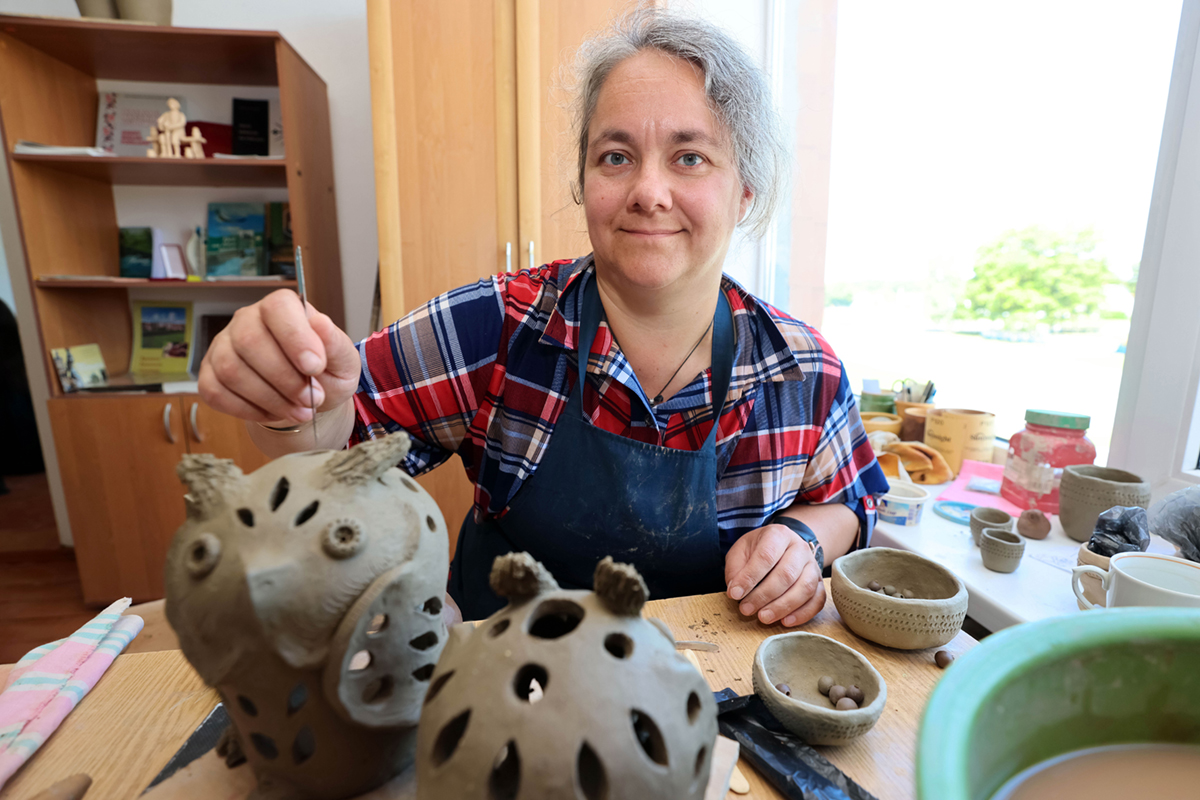 We caught Sergei Molchan, a Minsk resident, rolling a piece of clay… with a mop. In response to our amazement, Natalya Kabanova, Sergei’s wife, opened a small drawer and poured a bunch of little things on the table. Nails, nuts, screws and other things that we usually throw in the trash are successfully used by ceramists as the decoration and patterns for their products. 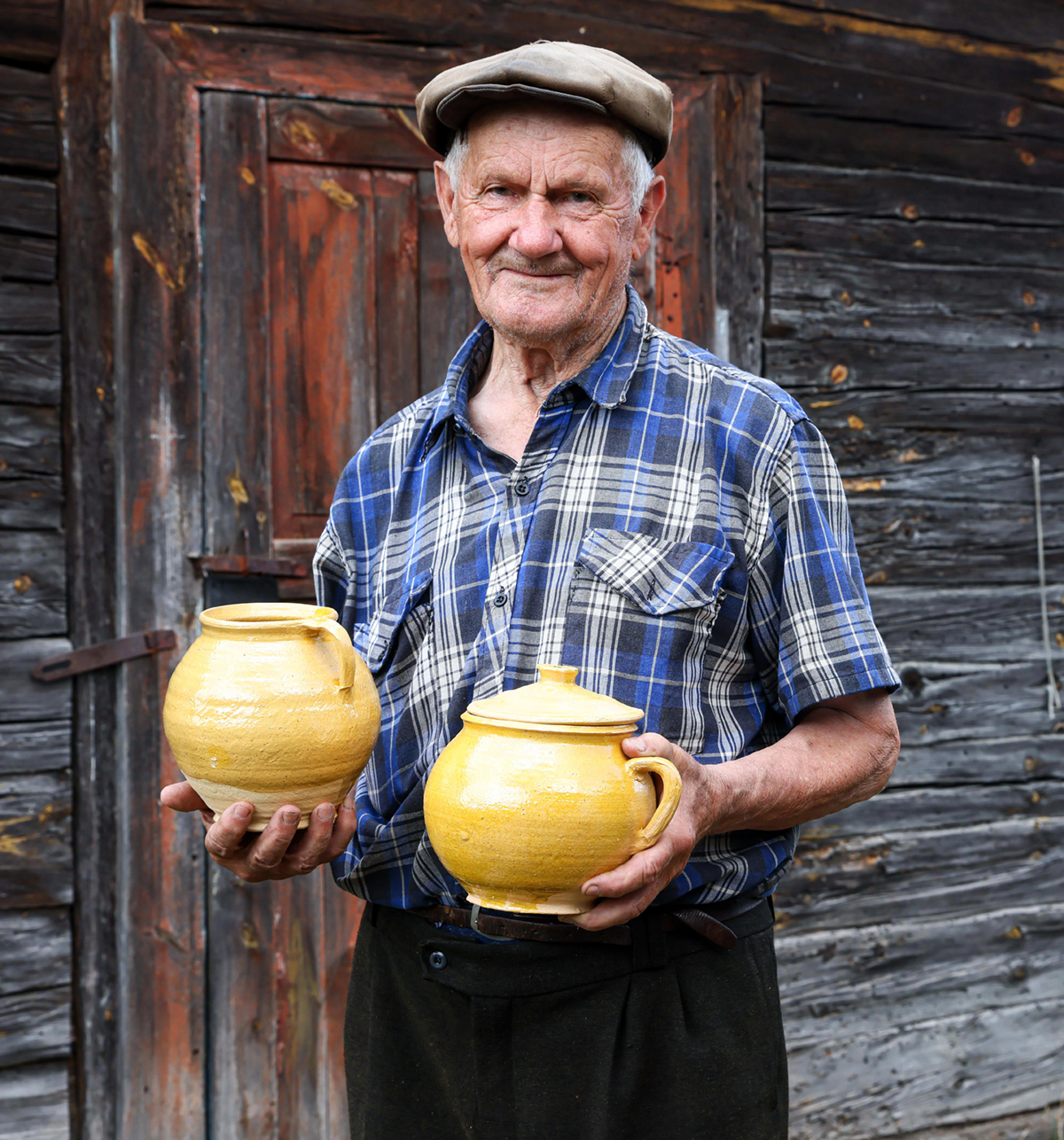 The oldest craftsman in the village Grigory Kovalko
Moose, ducklings, jugs, female figurines and other vessels dried up on the tables and window sills of the Gorodnaya pottery centre. The peculiarity of clay from Gorodnaya is that it dries for a long time, and in order for the product to pass this stage evenly, without cracking, the craftsmen wrap it with polyethylene on top. All work completed during the plein-air will remain in the centre.
“We ordered clay from Radoshkovichi, but the participants preferred clay from Gorodnaya,” explains head of the Gorodnaya pottery centre Vasily Kozachok. By the way, in 2022 he was awarded a special Presidential Prize for Spiritual Revival — for a significant personal contribution to the preservation of the traditions of pottery. He is a hereditary potter, he started his path at the age of 54, and recently joined the Union of Writers of Belarus, “For me, the pottery centre is like a child. Today we have 20 people involved, even high school students keep their eye in the potter’s wheel. We are very glad that some of our graduates take part in the plein-airs in Gorodnaya — these are brothers Ivan and Sergey Shelest. As they say, pottery is in their blood.”
At the beginning of the 20th century, more than 200 families were engaged in pottery in Gorodnaya, and about 500 families in the 1920-1930s. Now there are two old masters who are not letting go of the potter’s wheel — Grigory Kovalko and Makar Shelest.
Grigory Kovalko did not participate in the plein-air, but he made a lot of pots and jugs for the fair. We bought a few modest mamzelkas from him. Poured water into each — there is exactly a litre! Hand and eye still do not fail the 81-year-old master. We asked him to express his opinion whether the craft of ancestors will continue to live in Gorodnaya. 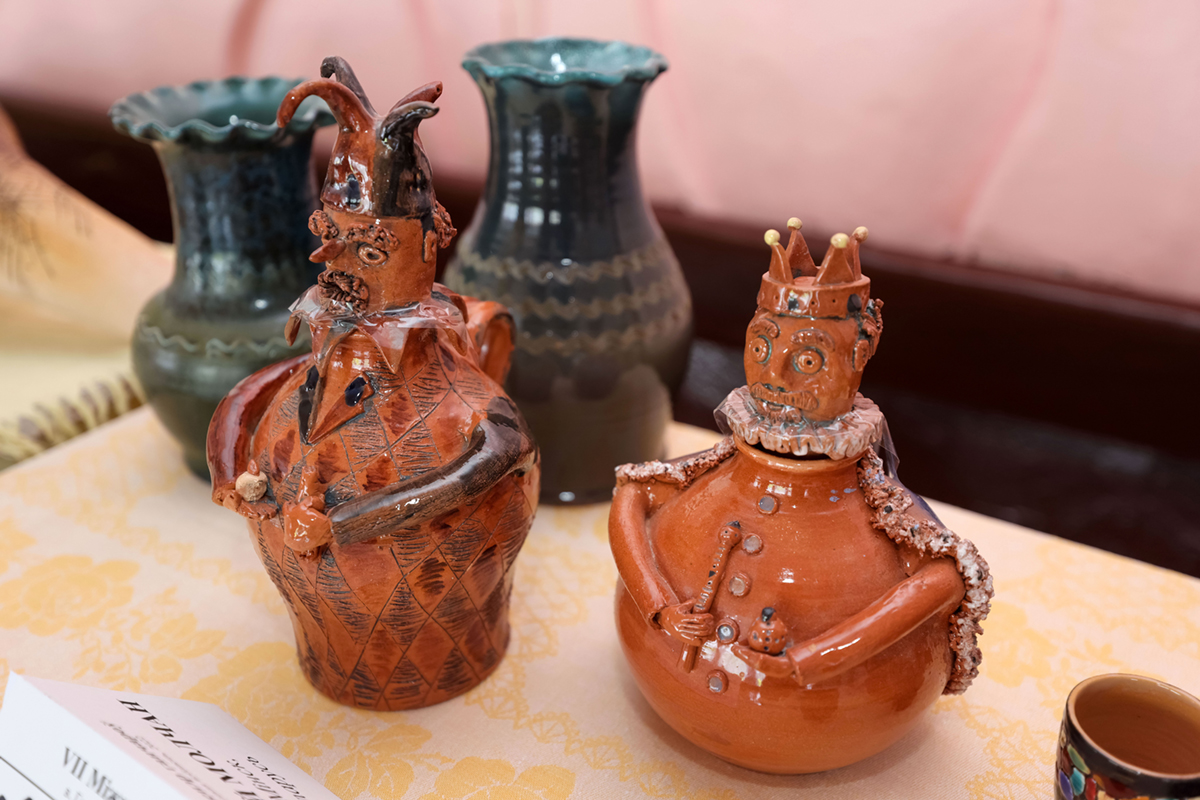 “Yes, indeed. There is so much crockery, but clay is just the best,” the hereditary potter tells us in his native Polesie dialect.
Vasily Kozachok is convinced that since Gorodnaya has managed to keep the devotion to the potter’s wheel up to the present, it will never disappear, “The state pays great attention to the preservation of traditional folk crafts. In each district, children learn something — pottery, weaving, embroidery, glass painting, belt weaving and straw weaving. Even if these skills do not become their lifework, the connection with their ancestors will not fade away. In principle, historical memory has never been lost in the villages, and now we have seen how important this is for preserving our identity.”

Of the 18 deposits of refractory clays discovered in Belarus, 10 are located in the Stolin Region. Some have been developed since the 12th century. There are unique deposits in the Stolin Region that make it possible to produce bricks with a frost resistance index of more than 100 cycles.