The heads of state had decided to arrange a full-scale bilateral meeting on the sidelines of a recent Collective Security Treaty Organisation summit in Moscow.
Vladimir Putin pointed out that the Russian economy is handling the sanctions rather well despite all the complications, “All the macroeconomic parameters indicate it. Certainly, everything is not simple. Everything that is going on requires the economic bloc of the government to pay close attention and exercise extra effort. On the whole, these efforts produce a positive effect. It is reflected by the level of trade turnover between our countries among other things.” 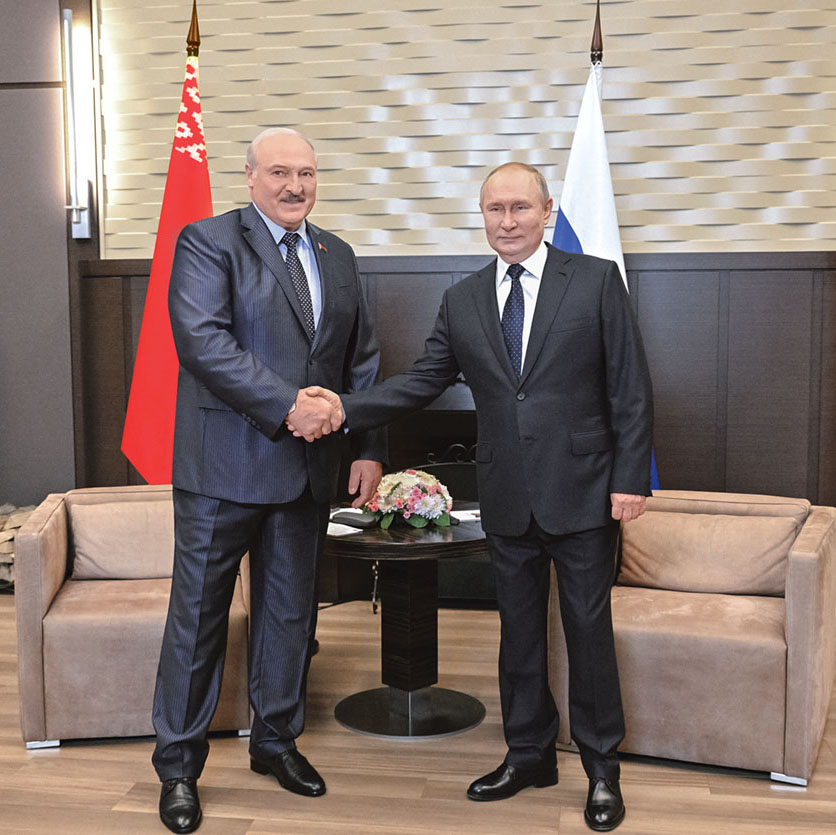 
Aleksandr Lukashenko stressed that the economy in Russia and the Union State is unexpectedly intensively strengthening amid sanctions pressure.

“It is very important (you once noted this) that the economy of Russia and in general of our union is not just strengthening. Take inflation, take unemployment. It turned out to be smaller. The unemployment rate is falling. This is good. Well, the ruble is strengthening at a frantic pace. Let’s not overdo it here. Thus, unexpected things happen. Well, they were unexpected for them, not for us. This is a time of opportunity. Without realising it they (the West) pushed us to work harder to improve our economy,” emphasised the Head of the Belarusian State.

The governments of Belarus and Russia, following the instructions of the heads of state, determined the main areas in import substitution and even made preliminary calculations of how much it would cost.
“It is little money. I will not say this sum publicly now, because it is still approximate. We will reach the main results in import substitution, first of all where we do have enough components and other products. Not to mention the security sector. As for security, we have already been doing a good job, producing what our joint army needs to accomplish tasks in this direction,” the Belarusian leader is sure.
Aleksandr Lukashenko ironically added,

“We can only thank them for giving us an impetus to our own development. We have a huge market, we have resources, technologies. They have obviously underestimated what is happening there. They lived reading only their mass media and got the inflation rate they have now… Although they say that Putin is to blame for that. They blame Putin for everything.”

The Russian leader pointed to the growth in bilateral trade. According to him, last year bilateral trade was record high and approached $38 billion level.
Vladimir Putin also highlighted that the transition to the national currency in settlements with partner states produced an appreciable result. At the same time, there is nothing new for Belarus and Russia in this regard, he noted, because the countries have been trading this way for a long time. Now the amount of settlements in Russian rubles is increasing.
“Of course, one of the key issues is... Everyone probably expects me to say energy — this is important, but co-operation in the manufacturing industry is above all. You have also repeatedly suggested taking additional steps in this direction,” said Vladimir Putin.
The head of the Russian state is also named co-coperation in the energy sector and agriculture as topics that are planned for discussion.
“We have plenty of avenues of joint work. We have something to talk about. Let alone future processes relating to the construction of the Union State of Belarus and Russia. As we’ve agreed, we will proceed with it calmly and without any rush. We will verify every step in order for such steps to make us stronger from within, from without, and make our political systems stronger. So that every step would enable conditions for their development,” said Vladimir Putin. He also stressed that every step relating to the construction of the Union State of Belarus and Russia should also create good, solid foundation for the economic development of both countries.
The President of Belarus noted, that there was a lot to discuss in the security sector, especially in connection with NATO concentrating its troops on the western borders.
Aleksandr Lukashenko explained, “There are some interesting things unexpectedly in Ukraine. You know it perfectly well. We and you should be worried about the steps they (politicians) are taking in order to dismember Ukraine. Furthermore, we are concerned by the fact they are ready — Poles, NATO countries — to come out, help grab Western Ukraine the way it was prior to 1939. We are concerned by it not only from the point of view of today’s security. Their strategy applies to Western Belarus, too. This is why we are on alert. As I’ve said, Ukrainians will have to ask us to prevent the separation of this western part and other parts from Ukraine. It is my stance but you know it precisely. We have plenty of problems here, too but those are not ours anymore. Those are their concerns that we will have to resolve. For instance, the incomprehensible behaviour of Poland President Duda in Kiev yesterday (Ed. note — President of Poland Andrzej Duda). By the way, he decides virtually nothing in Poland. He arranges these fakes.”
Aleksandr Lukashenko expressed confidence that Belarus and Russia would successfully solve all the emerging security problems.

“You are right about the security issues, I support you here. We have a lot of concerns. But we will be solving them. We are afraid of nothing. As they said in the old days, our cause is just and sooner or later we will win anyway,” concluded the Belarusian leader.