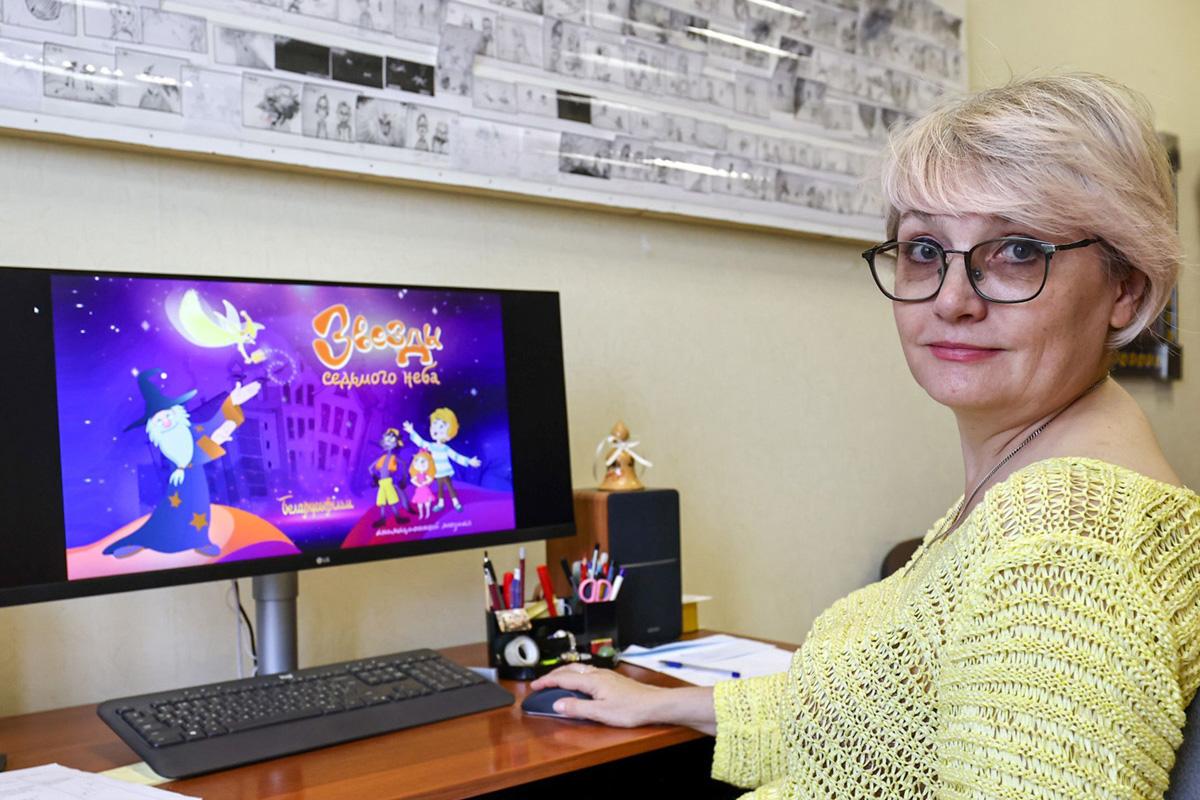 We grew up together with the characters from our favourite cartoons and had no idea of how these fictional friends come to life on the screen and what a great job is done to create them. It’s a true art to be able to immerse viewers into a film, to capture their hearts. This is exactly what a large team of experienced and creative specialists of Belarusfilm are engaged in; among them are screenwriters, animation artists and many others.

Specialists are now working on a full-length animated film: The Song of Sirin. It’s quite a complex format and, in the history of Belarusian animation, there is so far only one example of such a picture: The Stars of the Seventh Heaven. The latter was premiered this spring to many positive reviews.
Director of feature and animation films, Yelena Turova, has worked at Belarusfilm for 30 years and eagerly tells us about the new project, “The work is long-lasting; it will take four years. We’ll collaborate with a studio that works with the 3D technology. This is a kind of experiment for us, because we have not yet shot full-length 3D animated films.”
The preparatory stage will take about a year. Over this time, the team need to work out the characters, prepare snapshot drawings, animation and style sketches… In a word, much work lies ahead.
Creating an animated film, like any work of art, begins with an idea. Then a synopsis (animators use this word for a short linear presentation of the film script) is developed, the target audience and timing are outlined... 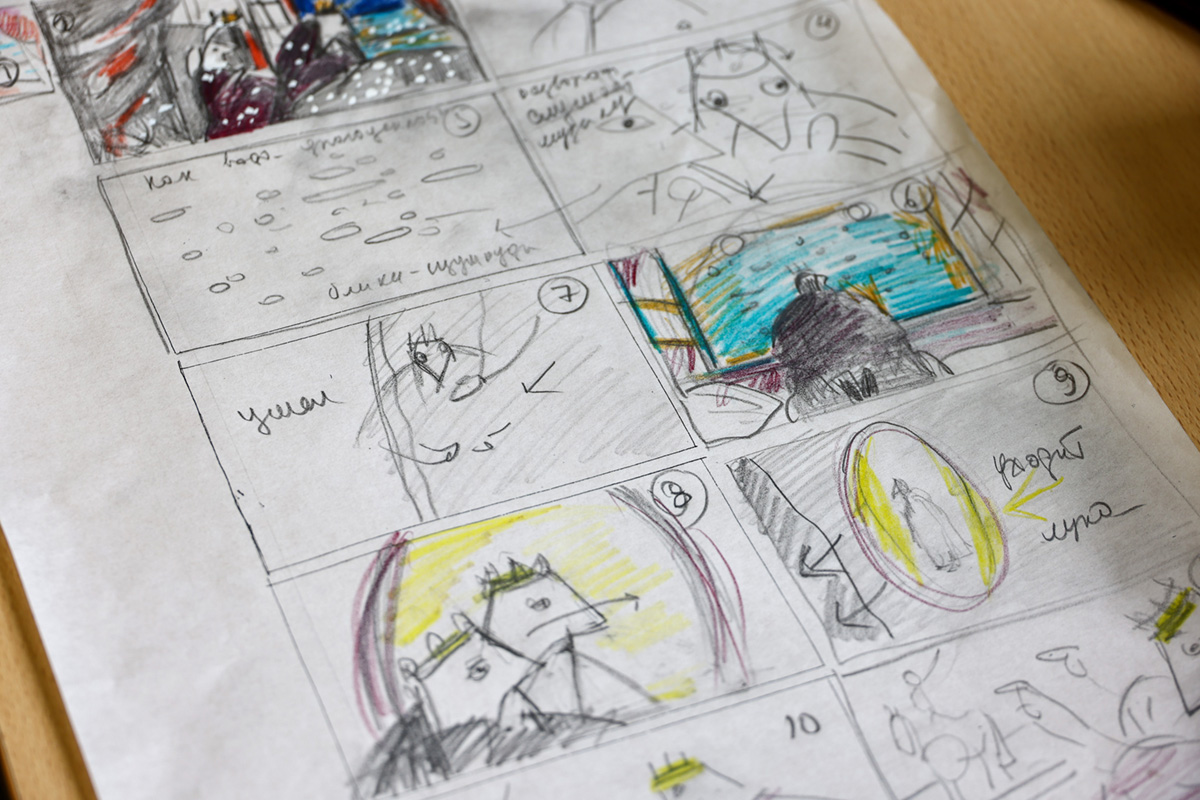 One cartoon second consists of 25 pictures

“Sometimes a well-known fairy-tale or legend is taken as a basis,” Ms. Turova explains. “The Stars of the Seventh Heaven, for example, is based on a book by Gennady Davydko, written for children so that they can make theatrical performances in kindergartens. We adapted the material as an animated film and a theatrical production is a different thing. Moreover, our film was musical and we had to compose a libretto based on the plot: part of the dialogues and scenes transformed into musical pieces. Therefore, when creating a script, it’s also important to take into account the genre in which the film will be created.”

We come into a room where a team of artists work. They join the process at the stage when the script is ready and face a truly important task: to create style sketches. Art director Daniil Zhyugzhda comments, “These give a clear idea of how the cartoon scenes will look and what style will be used. Based on them, everything will be drawn and characters are developed.” 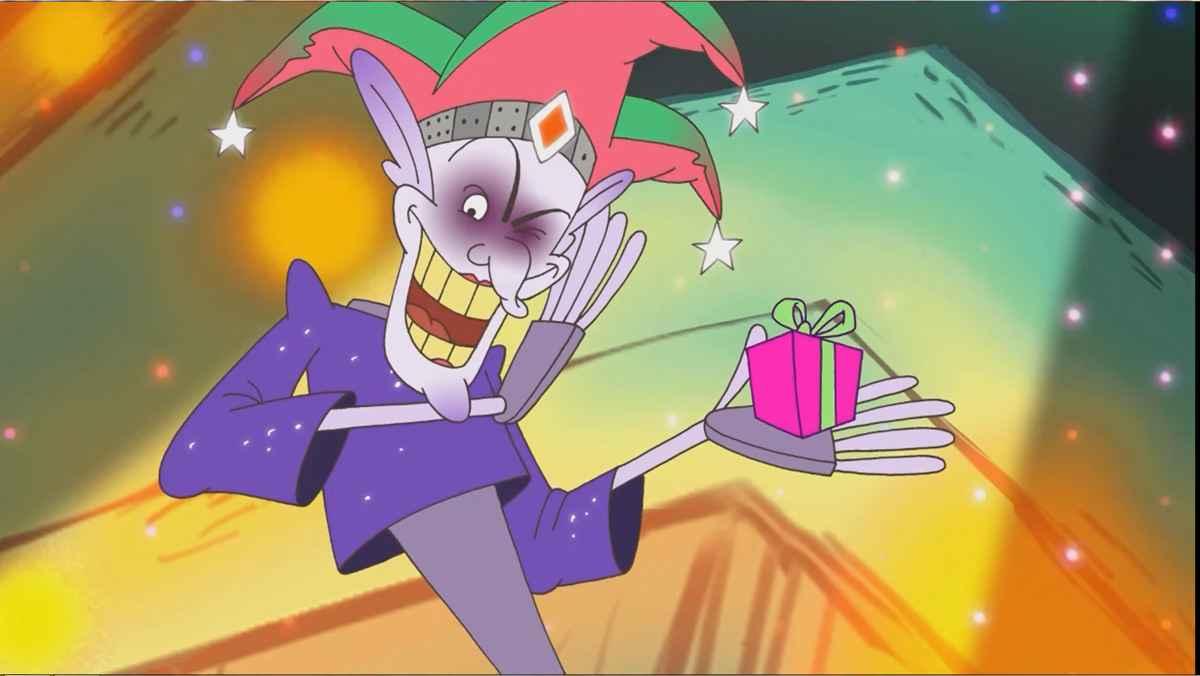 I notice many small pictures on the wall, arranged in rows. They remind me of comics in some way. This is a storyboard: the first visualisation of the project. Storyboard artists know exactly what each scene is about, how dynamically the action develops, what emotions the characters experience. From the storyboard of The Song of Sirin it’s possible to understand what the size of the film is, in which part of the shot the characters are located, where the edited pieces are cut, in which direction the participants of the events are moving… 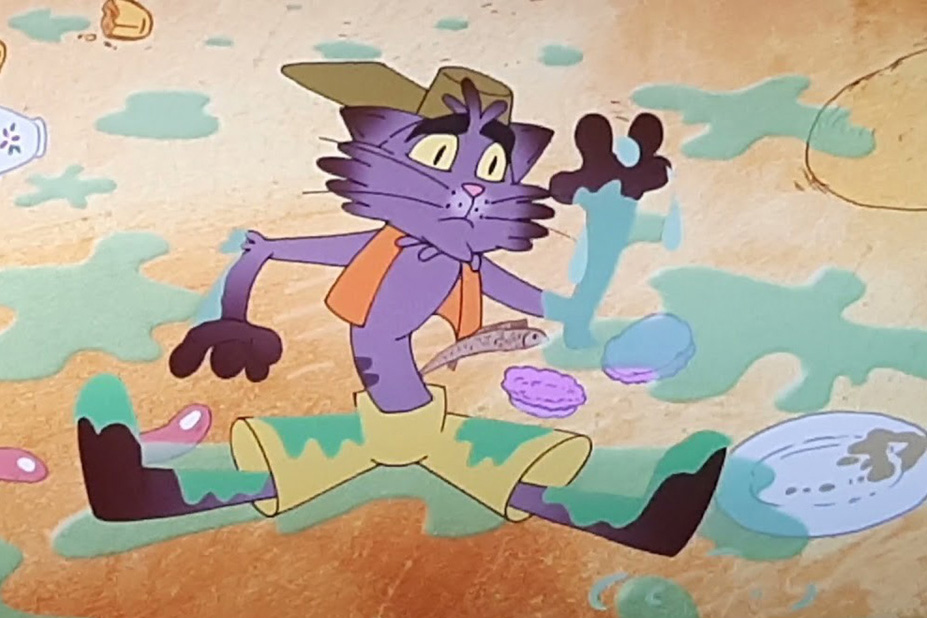 The next step is to scan all the images and collect them in the timeline in the desired sequence. At this stage, the audio part is added to the visual part: copies from the script are read and music is superimposed. The storyboard scenes collected in one video together with the draft sound form an animatic draft of the film. Then the team arranges group views to decide later on what works, what needs to be redone or removed. 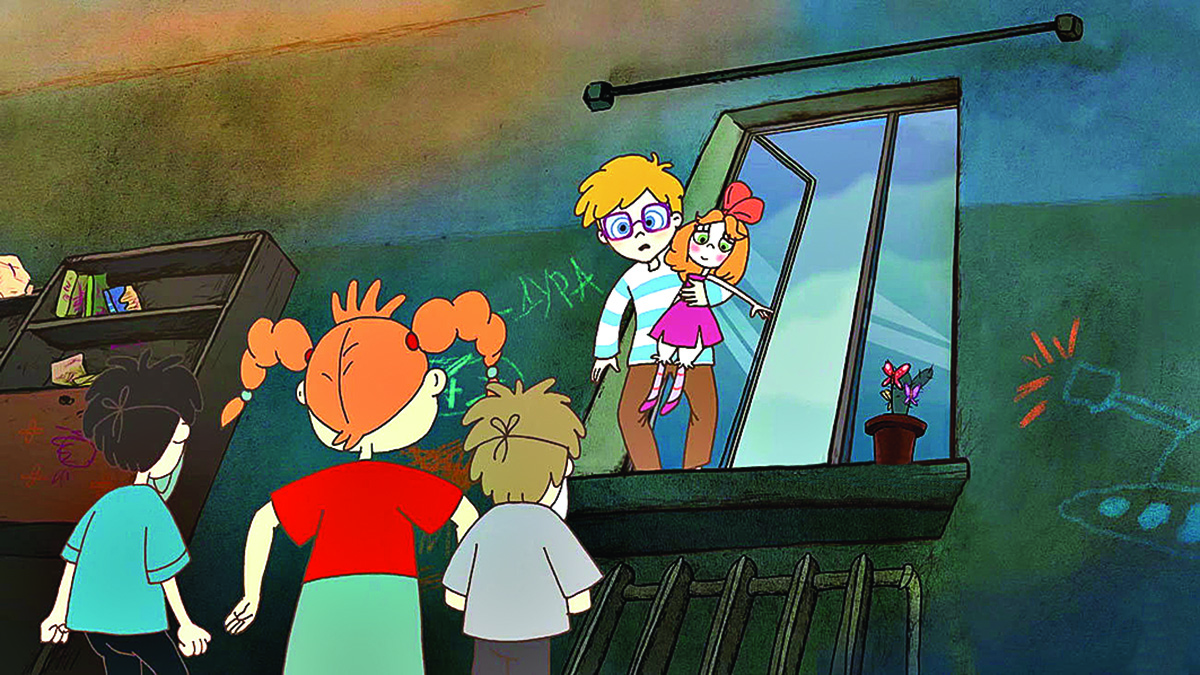 Shots from The Stars of the Seventh Heaven animated film


How characters are born

Character development is an extensive topic and each of them gets a kind of personal file, with information on its appearance, full-length and profile views, variations of extreme facial expressions (laughing, being surprised or scared).
“Locations are developed simultaneously,” adds Ms. Turova. “Every scene takes place somewhere — in a forest, a street, an apartment or some fantastic place… Everything needs to be thought through. That is, the team needs to build a scene so that the story develops on the screen as clearly as possible, every detail should help the perception of the film, and not conflict with it.”
It’s impossible to create a cartoon without animators, whose work actually combines two professions: an artist and an actor. They need not only play a film in their heads but also put it on screen so that the dynamics are felt and those who are engaged in technical assembly catch the rhythm. It’s top skills!
For a truly creative person, it’s not so important what a masterpiece is created from. It’s enough to simply turn to imagination and ingenuity. “You can make a cartoon out of anything, even from nails. The main thing is a good idea at the heart, catching at emotions,” the lady adds. “Modern audiences are now much spoiled and can hardly ever be surprised with technical effects. Everyone has seen everything. It is difficult to surpass Disney or DreamWorks, so you need to be interested in something else. We are betting on an idea.” 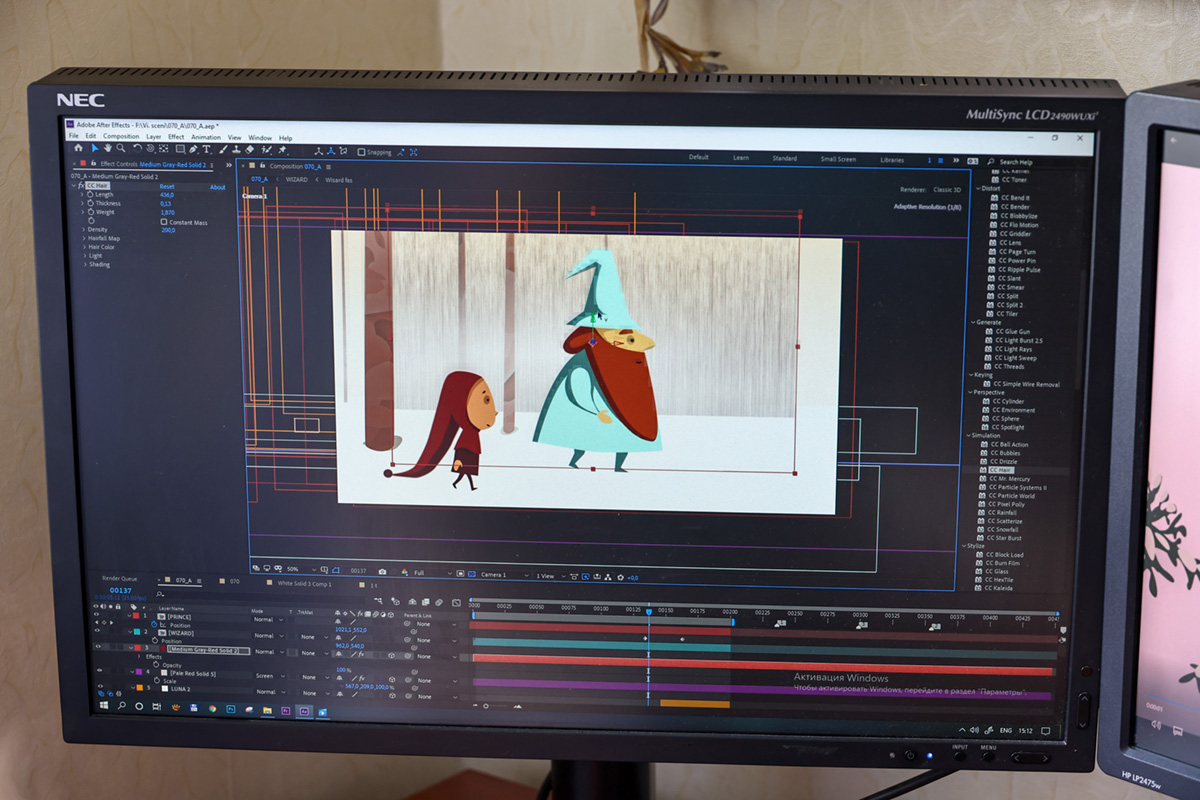 Finally, we move on to the stage that is most noticeable in the final product: movements and gestures. Each wave of the character’s hand needs dozens of shots which require the painstaking work of a whole team of artists. This is actually an answer to the question of why cartoons take so long to be made. A 10-13 minute film needs a year to complete. Look. One second of a cartoon has 25 pictures, so an average 70 minute film consists of about 100,000 pictures!

A soundtrack can either improve or spoil a video. Voices of the characters also matter. Sometimes animators immediately hear a specific actor in a character and ask them to read the text. In this case, the voice leads the character and helps develop it. This happened to actress Klara Rumyanova who voiced the Hare from Well, Wait! [Nu Pogodi!], Cheburashka, and the Baby Raccoon at the Soyuzmultfilm Sudio. All Soviet children knew her voice.
“Thanks to the voice, a minor character can become a favourite,” says Ms. Turova, adding, “For The Kinderville Ghost feature film based on Oscar Wilde’s story, we drew the image of a ghost cat — Amadeus. Dmitry Pustilnik, who voiced it, spent two hours to find the best intonation, though the character had only 20 sentences. As a result, the artiste made his speeches so masterfully that the animators followed the voice of Amadeus during their further work on the film. Another cat, from The Stars of the Seventh Heaven, spoke the voice of the singer, Theo. The musician’s remark about jelly turned out to be so successful that we even changed the mood of the character at that moment, letting a tear run down his cheek.”
Finally, the conversation turns to the future of cartoons and Ms. Turova admits: more realistic does not mean better. “The more realistic the character is, the less it is appreciated by the audience. Even if technologies continue to develop at the same quick pace, this doesn’t mean that craft cinema will sink into oblivion. Sometimes its strength relies on simplicity. Hand-made works — even with computer support — will always be highly valued as they are truly charming. Of course, computer cinema will also develop and, for example, the 5D technology has every chance of success. So far, it’s a kind of attraction in cinemas but — after all — the cinema was also nothing more than an attraction at one time,” says Ms. Turova.