The assessment was given by the presidents of Belarus and Russia on the results of many hours of negotiations in Moscow and the agreements reached. Aleksandr Lukashenko and Vladimir Putin agreed on all 28 integration programmes of the Union State. 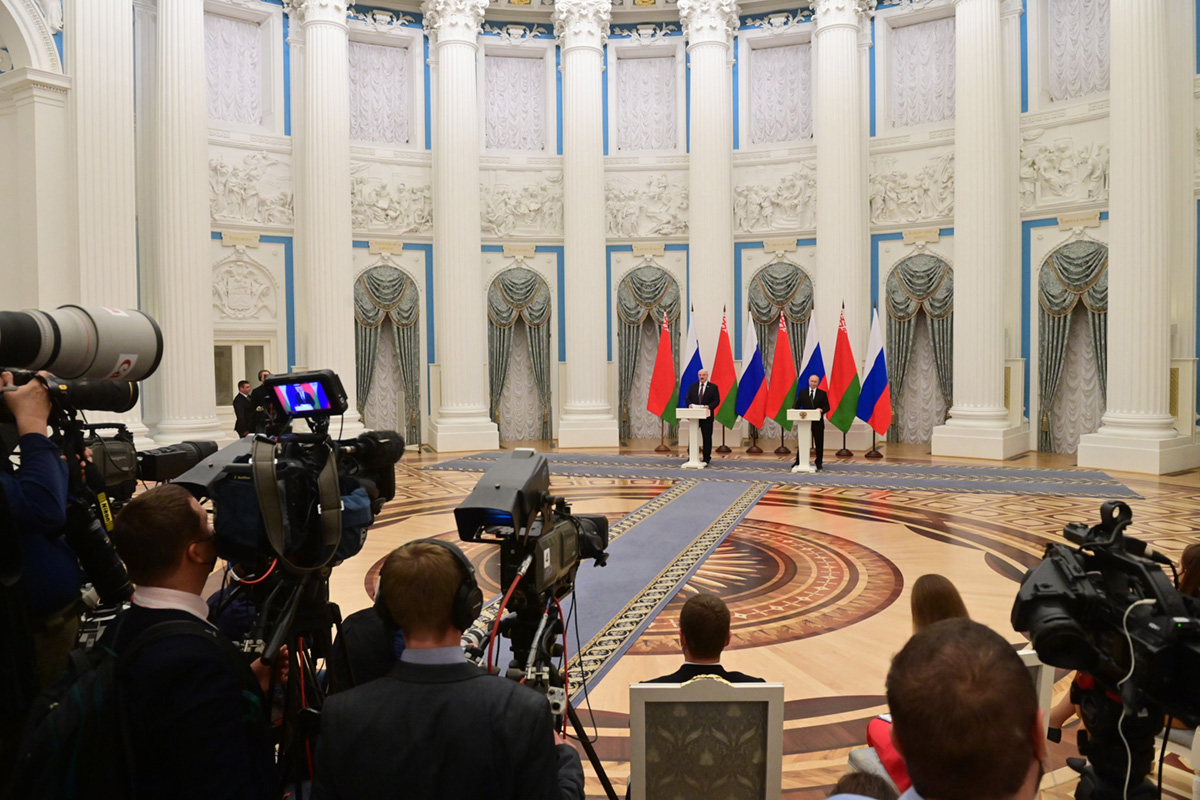 Over the past few years, Belarus and Russia have painstakingly worked on the Union State programmes to deepen integration. They were worked out at expert and government levels, with heads of the two states also discussing them during personal meetings.
During the final press conference for journalists, the President of Belarus called the negotiations held with his Russian counterpart honest, open and constructive, “Our governments have done a tremendous job. Vladimir Putin and I have made today all the fundamental decisions that concerned us... In order not to detail the contents of the documents reviewed (they will be made public, it’s not a secret), I will highlight the most important thing in them. These are equal rights for the economic entities of our countries. Those equal conditions various representatives of Belarus have talked about for many years, including me as the president. It is the underlying foundation. We are full partners,” noted Aleksandr Lukashenko.
The Head of State stressed that there should be fair competition for all companies in the markets of Belarus and Russia,

“It was for the sake of equality, profitable co-operation and fruitful interaction that the Belarusian-Russian integration was started. The mechanisms for the development of a single economic space are clearly spelled out in the Union State programmes: the formation of united sectoral markets, the implementation of a harmonised financial, tax, credit, pricing and trade policy.”

According to the President, the Union State programmes also include a solution to the problem of energy supplies to Belarus, an increase in the volume of transport services, financing of new investment projects, reaching common principles in implementing agricultural and industrial policies, and increasing the level of mutual social guarantees for citizens of the two countries.

‘We are only stronger together’
Aleksandr Lukashenko asked the critics of the Union State in Belarus: what is bad in the decisions made for Belarusians?
“I would like critics of our integration in Russia to tell me where they see a weight tied to the legs of the Russian Federation. There is nothing bad for the peoples of Belarus and Russia in these programmes and could not be. Everything was aimed at increasing the well-being of our peoples. And we must put an end to these conversations. Our integration is exclusively mutually beneficial,” underlined the Belarusian leader.
He noted that during the negotiations it was possible to reach mutual understanding in all main areas. Answering journalists’ questions,
Aleksandr Lukashenko noted,

“I will underline: life convincingly proves that everything we do is aimed at the benefit and specific needs of our people. I am absolutely convinced that deepening integration and building up multifaceted interaction is the most indicative and effective response to all our ill-wishers. We are only stronger together.”

During the talks, alongside deepening integration between the states, the presidents discussed in detail topical international problems, relations with neighbouring countries and associations. They dwelt in detail on the situation in the zones of instability, primarily in Afghanistan, from the point of view of threats to the security of the Union State. The Belarusian leader explained to the press,

“In this context, the primary importance is to ensure the comprehensive security of our countries and the CSTO as a whole. We will all together approve a unified position on this issue during the upcoming events in Dushanbe [CSTO and SCO summits]. Even we — being at the centre of Europe — far from the theatre of military operations, felt the consequences of the Afghan crisis. Look what is happening with the refugees on our borders, how the ‘progressive’ West is behaving, constantly rattling their weapons.”

According to the Head of State, the meeting also tackled issues of further normalisation of transport communications, as well as interaction in the field of microelectronics and in the construction sector.

Important agreements
Aleksandr Lukashenko and Vladimir Putin also answered journalists’ questions regarding the implementation of the provisions of the Union State agreement, the removal of various long-standing problems in bilateral co-operation, the migration crisis, the topic of air communication between the countries, prices for Russian energy resources supplied to Belarus, issues of credit support and the possibility of the emergence of a single currency of the Union State.
“We have agreed to conduct a common macroeconomic policy, harmonise monetary policy and integrate payment systems. We have also agreed to ensure information security, deepen collaboration in the customs and tax spheres: we are talking about the transparency of the customs value of goods and the definition of a transparent structure for the value of goods in the economy in general,” said Vladimir Putin.
At a meeting with journalists, it was noted that Russia is lifting all COVID restrictions on passenger air traffic with Belarus. The Russian leader explained that this topic was not touched upon directly at the talks. However, the commission of the Russian Government has recently made a corresponding decision.

The President of Russia noted that as a result of the negotiations, it was possible to develop mutually acceptable approaches to the gas issue. The Russian natural gas price for Belarus for 2022 will remain at the current year’s level. At the same time, by December 1st, 2023, a document will be signed on the creation of a unified gas market within the Union State. Moreover, it is envisaged to conclude an agreement on the unification of the oil and oil products markets, as well as an agreement on a single electricity market.

At the meeting with journalists, the presidents spoke about the single currency of the Union State. It’s too early for Belarus and Russia to switch to a single currency, believes the Head of the Belarusian State. However, he did not rule out that, in the future, the two countries may return to this issue.

“Look at their ‘democratic’ face: they shoot, catch migrants with dogs, organise them in groups and drive them across the border to us, shooting, thank God, over their heads. Although there are also deaths. They throw them to us across the border: ‘Take them away’... We honestly carried out our mission until they began to forcefully turn the situation in our country and attempt to overthrow the government.”

The President also added, “We will always do what we need to do as a reliable partner. If Europe wants these normal relations, please, we are ready to negotiate tomorrow.”
Aleksandr Lukashenko noted that during the construction of the Union State, Belarus and Russia have always focused on the European Union, but today this union is not the best example, “There are already a lot of tendencies leading to collapse. They already openly criticise each other. We do not want to repeat these mistakes.”
During the conversation with journalists,
Aleksandr Lukashenko spoke about speculation connected with the absorption of Belarus by Russia, “The President of Russia diplomatically didn’t mention speculations about mergers and takeovers and so on. I should say that the president of Russia and I did not succumb to this disease. If others did, we can heal them.”
At the same time, the Head of State noted that the leadership of both countries will take steps exclusively in the interests of their people. If Belarus and Russia need closer relations, this will be done instantly as soon as citizens’ requests are voiced.