Two major exhibitions of book illustrations by Valery Slauk opened in Minsk, which became beautiful elements in the celebration of the 75th anniversary of the artist

He always stood out from the rest. Valery Slauk is an artist who is equally appreciated by art historians, museum workers, journalists, and students. He is also considered to be our Belarusian Durer — one of the most famous domestic graphic artists, the creator and keeper of his own worlds, inhabited by hundreds of fantastic characters. More than one generation has grown up on Slauk’s book illustrations.
Two exhibitions were opened in Minsk at once by the anniversary of the artist. The first one was held at the Academia Exhibition Hall, where several dozen illustrations made by Valery Slauk from 2013 to 2022 were presented. The second operates in the National Library, where the audience is waiting for familiar and beloved masterpieces that cannot be confused with any other works.


Fairy tales for children and adults

Slauk has never been engaged in his own promotion, although his work is known and loved even by those who are very consumerist towards art. These are the bizarre book Incredible Adventures of Arbuzik and Bebeshka by Eduard Skobelev, which has been reprinted many times, Ivanhoe by Walter Scott, Amphibian Man by Alexander Belyaev, the Belarusian folk tale Pilipka — our little son — the unique style of the artist is quite easily recognisable in each of these works. 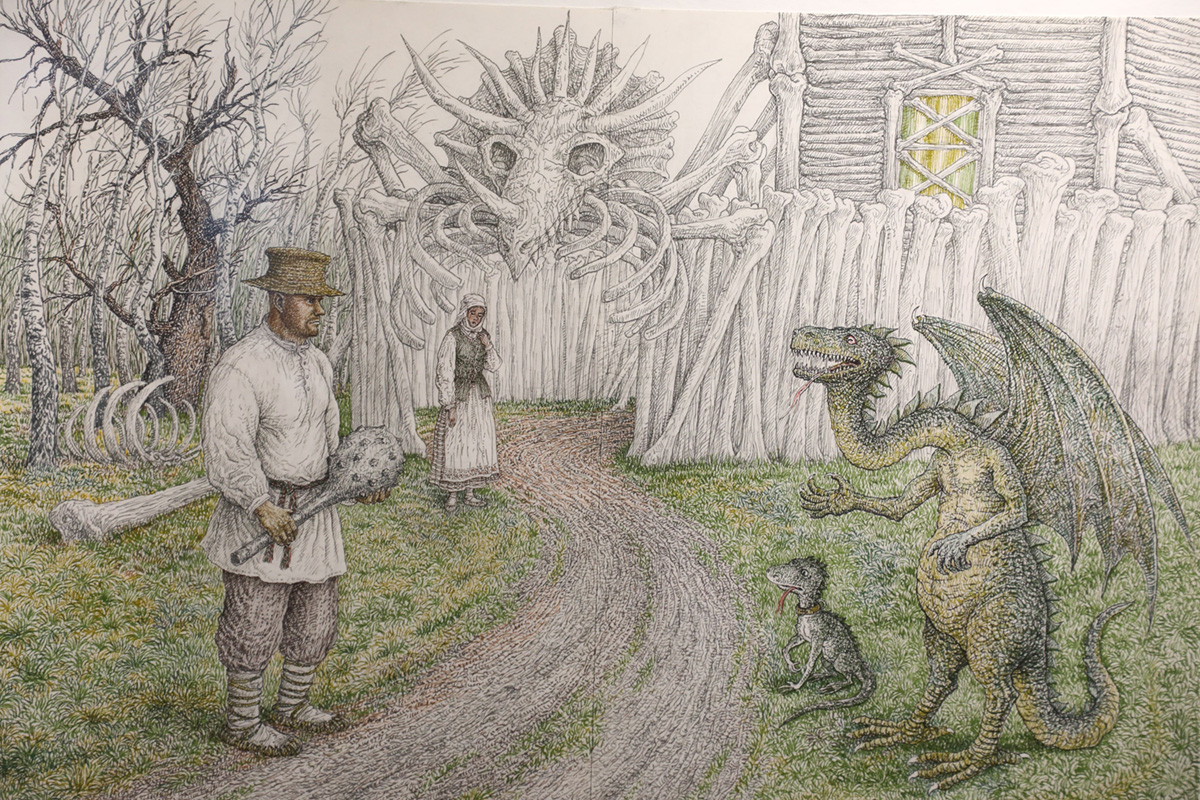 Belarusian (or, more broadly, Slavic) mythology occupies a special place in Valery Slauk’s book illustrations. He is extre­mely attentive to the literary source and translates words into a picture with almost cinematic accuracy.
Yeunik and Shatan, Valasey and Zlydzen, Azarnitsa and Vodyanitsa — Slauk surpasses any other illustrator in the stories about these magical characters.
In 2008, a Charouny sviet [Magic World in Belarusian] collection of Belarusian folklore was published in the Petrus Brovka Belarusian Encyclopedia Publishing House. The ethnographer Vladimir Vasilevich collected and Valery Slauk drew the most popular fabulous and mythological creatures that have been preserved in the spiritual culture of Belarusians and have come down to our days. The book soon became internationally recognised, and Valery Petrovich was proclaimed the best illustrator of  the year in Belaru­s. 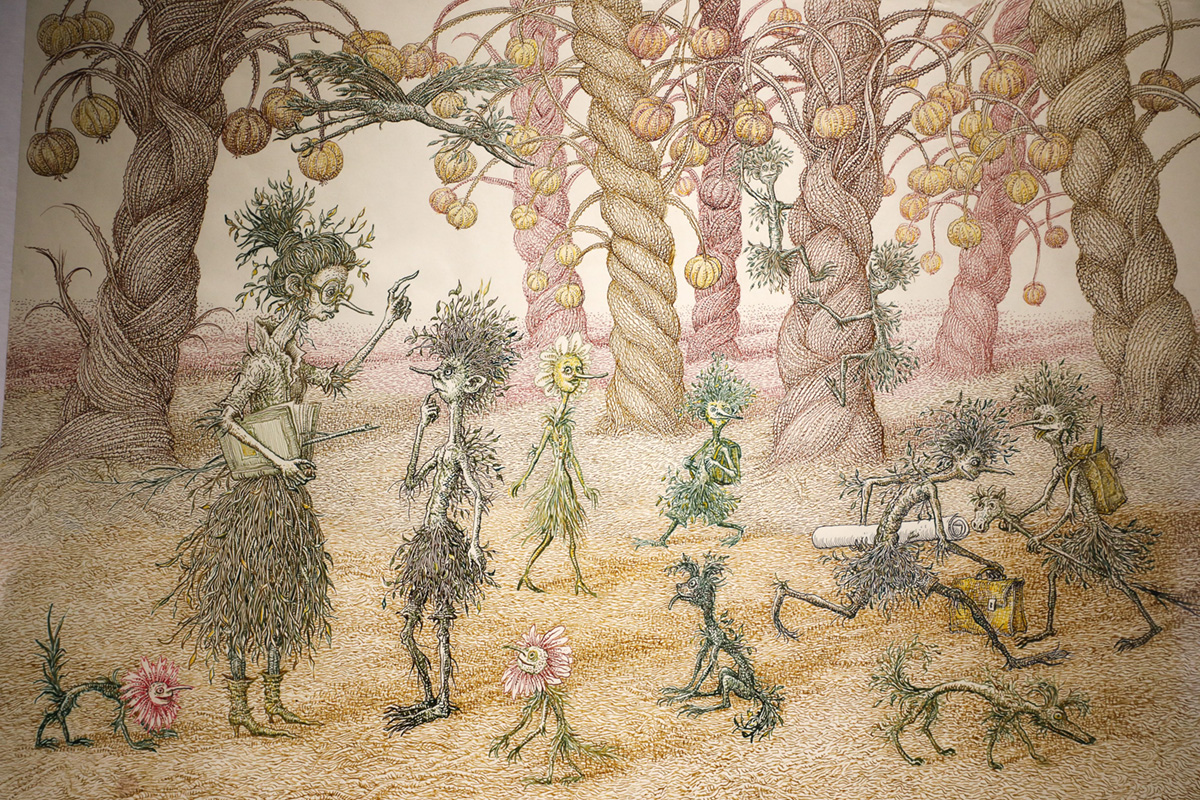 The last two series of works, by the way, are also connected with mythology. Valery Slauk made a graphic series for an excellent Belarusian-language novelty in 2020 — Viadzmar, jaki rabiusia vaukom [Witcher who turned into a wolf in Belarusian] collection of fairy tales and legends. And the other day he sent illustrations for an extraordinary edition of Belarusian folk tales to St. Petersburg, where they would be published by the Vita Nova publishing house. It is extremely expensive, aesthetic and ambitious idea. Actually, this idea reflects the sequence of the Slauk’s creative work.
“Sometimes people ask: ‘How do you come up with these characters?’ I do not know. I never thought about it. My head is arranged in such a way that at first I have some kind of image. Then I sit down and put it in order with a pencil. I don’t need to overthink, when the text is good. Although... I remember that in the Charouny svet collection there were six types of only one mermaid! And these are not just drowned women, like in Gogol’s works. There are forest ones, with snake tails (Vuzhalka), and with flipper legs (Azarnitsa)... There are even those that are overgrown with white fur for the winter! It is called Hajouka. It amuses me that this seems to come from peasant tales: they say, why is she walking naked in winter, let her wear a fur coat,” says the artist.
As a child, Valery Petrovich recalls, he was inspired by Grimms’ Fairy Tales — a large tome with illustrations by Gustave Doré. He also loved Gogol — Viy and Evenings on a Farm Near Dikanka, “I used to read a lot, and it was scary to stay at home alone. However, apparently, it develops the imagination. You will not become an artist without taking the text to your heart.” 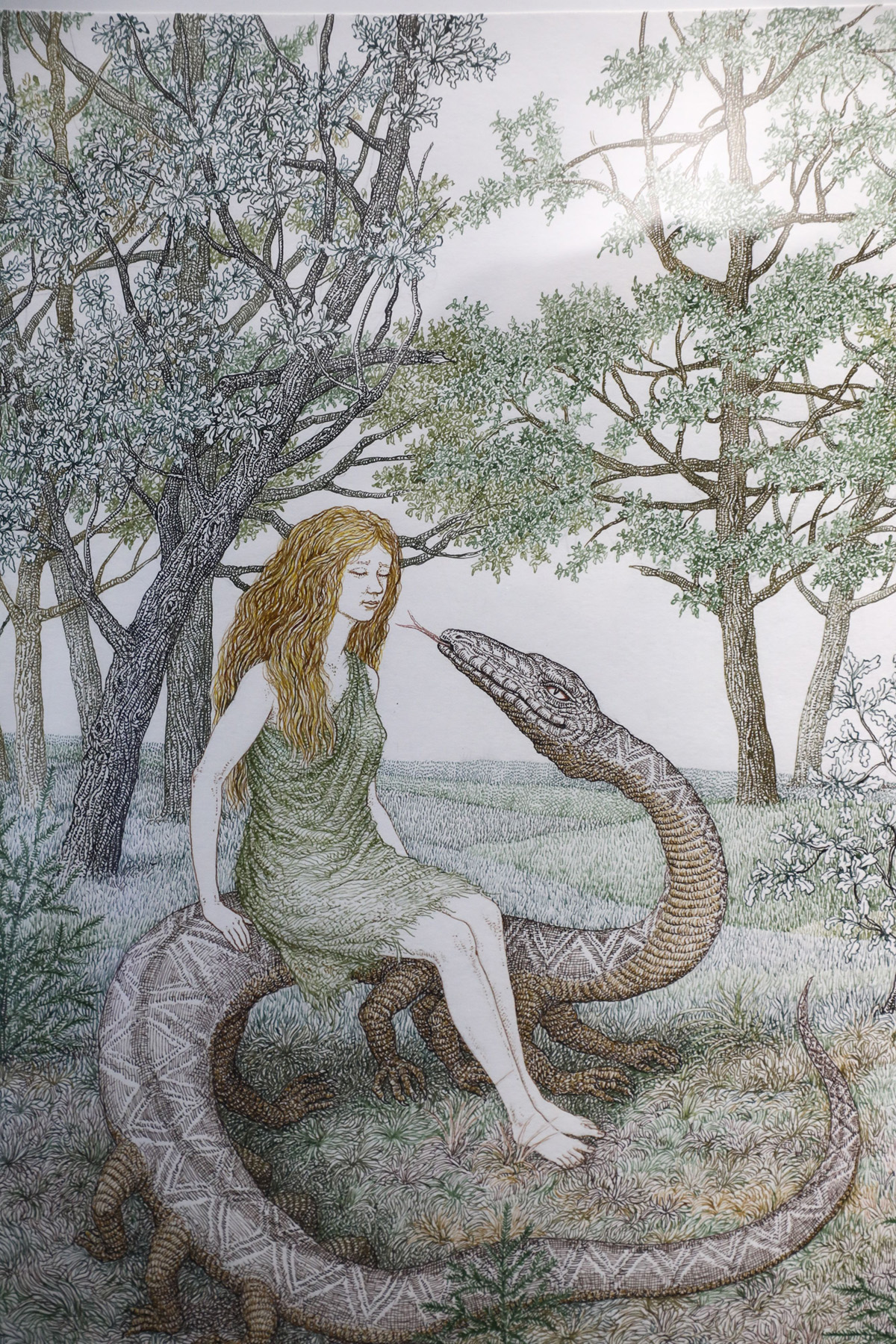 In the 1980s, Valery Slauk, who by that time had become a well-known artist himself, was greatly influenced by the illustrations of the Slovak graphic artist Albin Brunovsky, “These are absolutely incredible works. Moreover, I saw them live. My friend Kolya Seleshchuk [a well-known painter, graphic artist] bought the first car, and we went on a trip to the Baltics. We just accidentally got to the exhibition of Brunovsky, who made fantastic lithographs and etchings. He was the first in modern European art to reach such a level, which, it seems to me, is simply impossible to repeat. You look at this small ex-libris (slightly larger than a matchbox!), and there is the Tower of Babel, and there are 40 people on it... And all are carefully drawn. A little more, and it would have been beyond perception.”
The style of Slauk himself is also distinguished by almost jeweller craftsmanship. He began to hone his talent and seek perfection early — and never turned off this path.
“For several years I received a scholarship from the Union of Artists of the USSR and went to the Rest and Creativity Centre in Senezh. The so-called severe style was in fashion in those days — without unnecessary details, but expressively, in order to achieve the greatest impression with the least means. I arrived there and, as always, began to ‘knit’ something, as it was called then. The director could not stand it and said: ‘Well, why are you knitting this lace? You need to work like a man! Here’s a plot for you: women build BAM (Baikal–Amur Mainline), they carry rails. Paint them!’ But I don’t know how to do this, I like the details most of all. I am convinced: you have to draw for your pleasure,” explains the artist.
The works of Valery Slauk in book and easel graphic have been repeatedly recognised as the best examples of modern graphic art.
For many years Valery Petrovich has been teaching at the graphics department of the Belarusian State Academy of Arts. He does not look down on the youth — on the contrary, he sees in them those who will fill the artistic space after the retirement of the masters, “Nice guys! The only pity is that the guys are few. There are very talented girls, but not all of them decide to devote their career to graphics. I’m interested in young people. Recently they made stickers for Viber with my works. They asked me — ‘Do you mind?’. On the contrary, I say, it’s interesting. I don’t mind, let them use it.”