This is the second name of the Sharkovshchina District: it’s time to stock up on ‘anti-cold’ vitamin treats 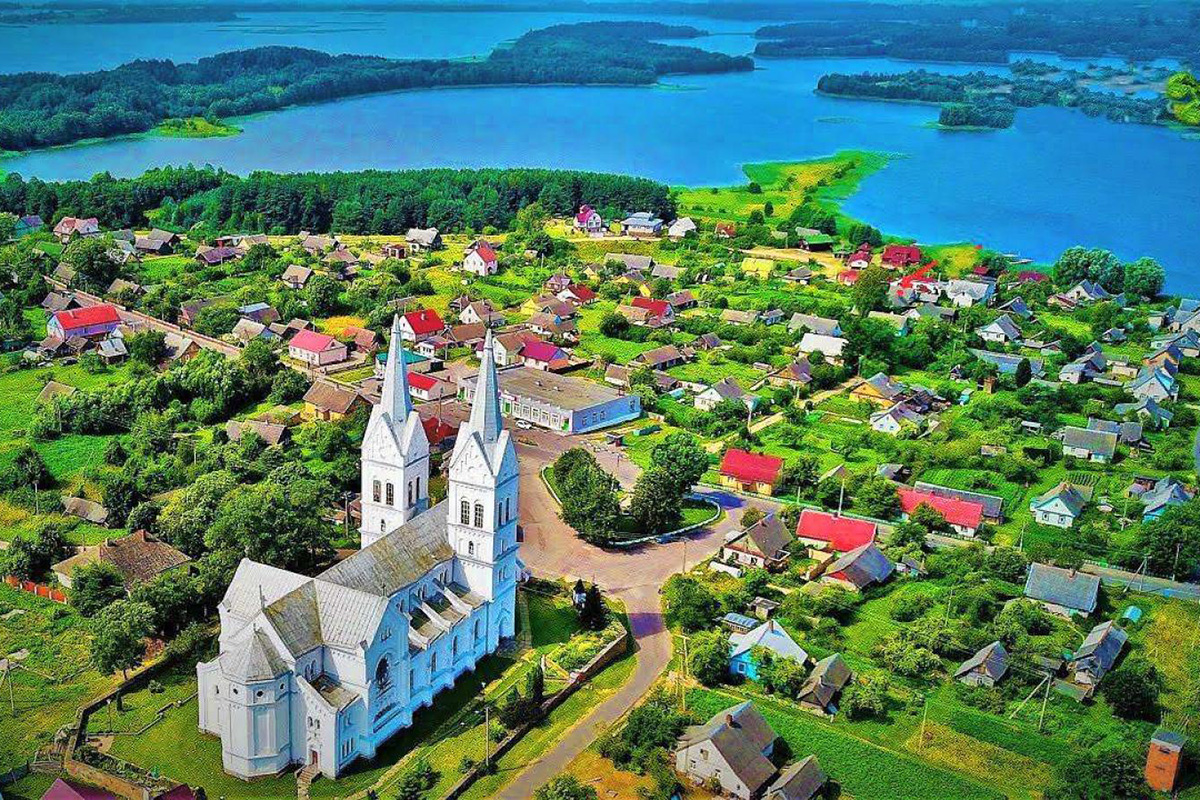 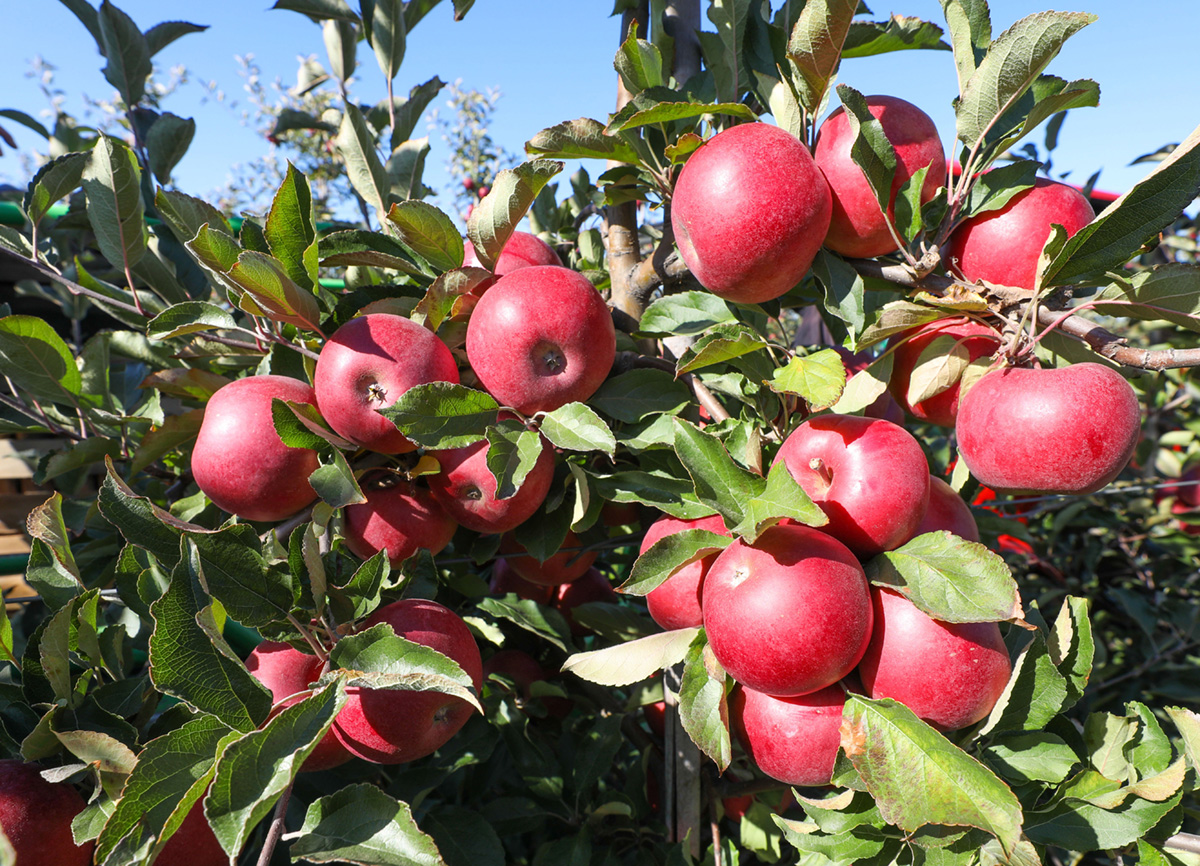 In the village of Alashki, there are apples for the most fastidious gourmet: from very sweet to sour, from green to rich raspberry. Moreover, they don’t care about severe winters: the fruit can be stored until almost next summer. The most popular variety, ‘Pamyat Sikory’ (Sikora’s Memory) is named after a local self-taught apple-breeder. Ivan Sikora bred about five hundred varieties of apple trees; during his lifetime he was called the ‘Belarusian Michurin’. The plantsman laid a garden in the village of Alashki before the reunification of Western and Eastern Belarus, saved during the war. The experiment was successful. Today, people from all over the Union State come to the small homeland of the famous agronomist for bulk buys of the fruit. This summer, guests from Smolensk visited the traditional apple fest. Against the background of autumn ARVI and coronavirus, the benefits of apples are undeniable. It’s all about their unique chemical composition. This amount of vitamins, minerals and other nutrients is not found in any other fruit. Local apples are rich in antioxidants that protect our body from aging and literally prolong youth. Moreover, they have strong anti-inflammatory effects and boost immunity.

In the agro-town Radyuki, Belarusian national cuisine is presented in all its glory. Old and varied, it doesn’t end with the popular draniki (potato pancakes). Skilful housewives managed to save unique recipes for unusual dishes from their mothers, grandmothers and great-grandmothers. At the local House of Culture, a club of Belarusian national cuisine — Grutsa — was established. It is named after a unique dish: fragrant pearl barley porridge with peas, seasoned with onions and crackling. 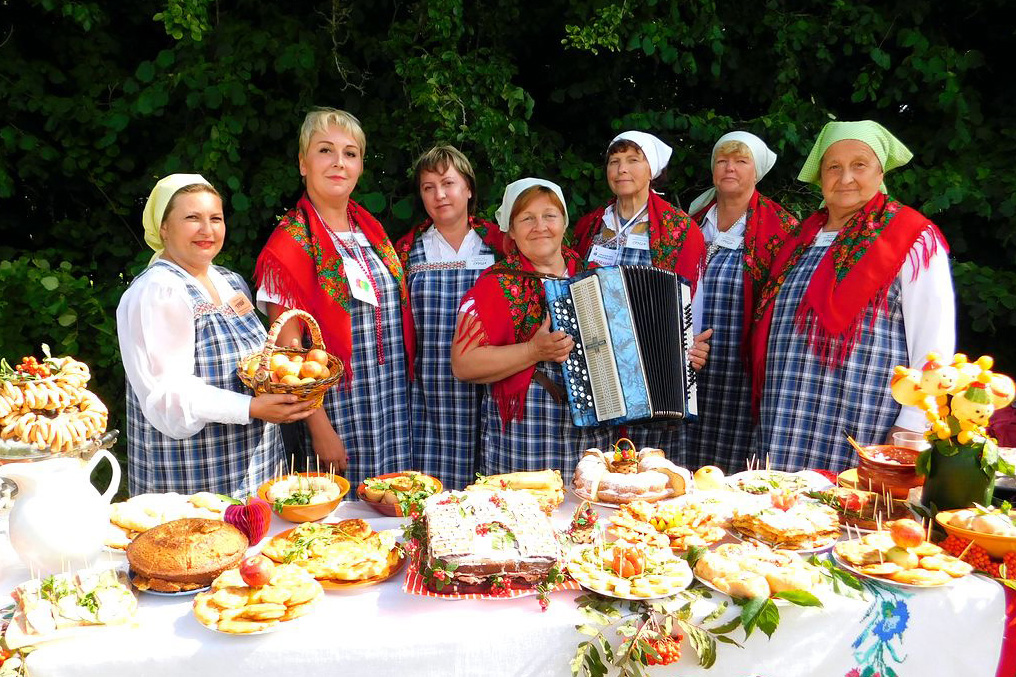 This dish, alongside oatmeal jelly, ham hocks and mushroom stew, was always held in high esteem by the Radyuki dwellers, especially at Christmas and Lent.
Today, sophisticated tourists need to be surprised not only with a delicious authentic dish, but also with an unusual presentation. Local hostesses will give a master class and skilfully show you how to cook on the stove, in the oven and ... on a wooden block. An uncomplicated device that looks like a primus is jokingly called ‘local know-how’ by the villagers. A couple of light cuts and the block — set on fire from the inside — is ready to work. The very process of cooking on it is a special kind of culinary art.


Listening to a clay song 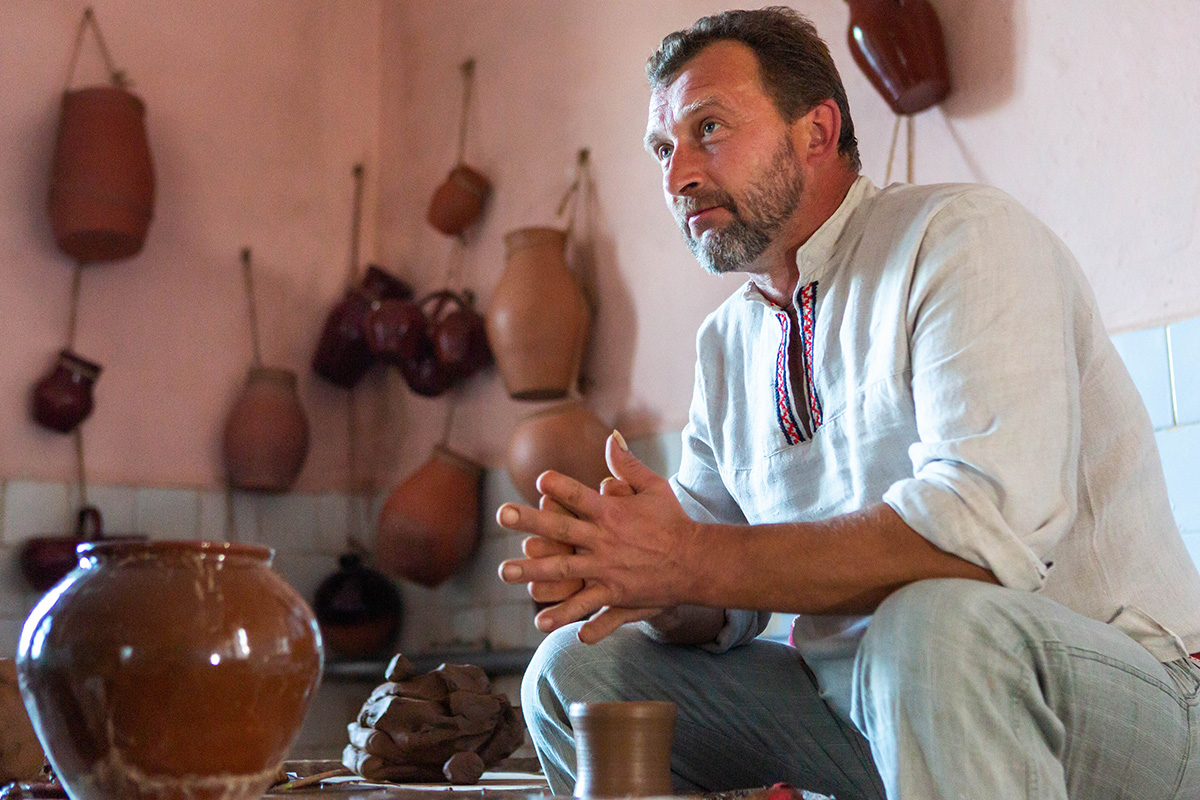 On the coat of arms of Sharkovshchina you will see an impregnable cogwheel tower made of red brick, similar to a chess rook. In these lands, clay is not just a natural treasure. According to one version, the clay gave its name to the town: after the rain, the clay soil spread, and in order to maintain balance and not sit in a puddle, passers-by had to shuffle (‘sharkat’ in Belarusian) their feet.
You can look at the variety of one of the most ancient Belarusian crafts in the House of the Potter — located in the village of Germanovichi. The local clay has a special colour: sunny and bright red. In skilful hands, a shapeless mass turns into clay pots, jugs, baking containers, floor and flower vases, mugs and candlesticks. In front of the public, masters sculpt their creations, spin them on a potter’s wheel, send soft clay to the oven and show their finished masterpieces. After firing in the oven, the jugs are bathed in milk. Ceramic treated in this exotic way becomes water-repellent, obtaining a beautiful dark shade.


Seeing the Gardens of Eden

Photo: www.citydog.by
In Germanovichi you will find the Art and Ethnographic Museum named after Yazep Drozdovich. One of the most mysterious artists of the 20th century transferred the visions that came to him in dreams onto canvas: amazing Saturians, the fiery sands of Mars and futuristic landscapes. The bold and mysterious experiments during the life of the master was not appreciated: people saw him as an eccentric and a fantasist. The unrecognised genius painted colourful flowers, bizarre birds, fire-maned lions in the Gardens of Eden on black canvases for a nominal fee. Naive works were not only a decoration, but also a kind of talisman; they were presented ‘for good luck’ and hung in the house at the most honourable place. Alas, with the development of industry, after factory carpets came into fashion, the painting tradition did not last long. Today, the largest collection of ‘malyavankas’ can be seen in the Germanovichi Museum.


Collecting ‘red gold’ in a basket 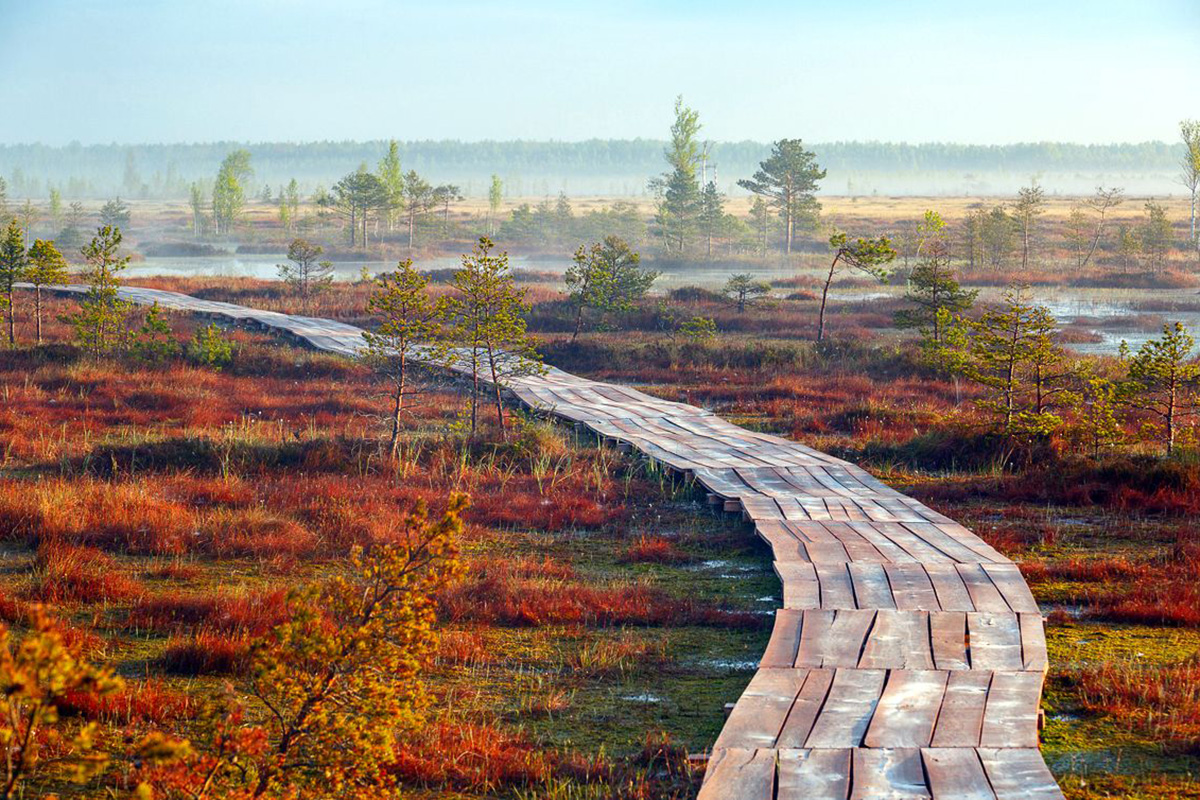 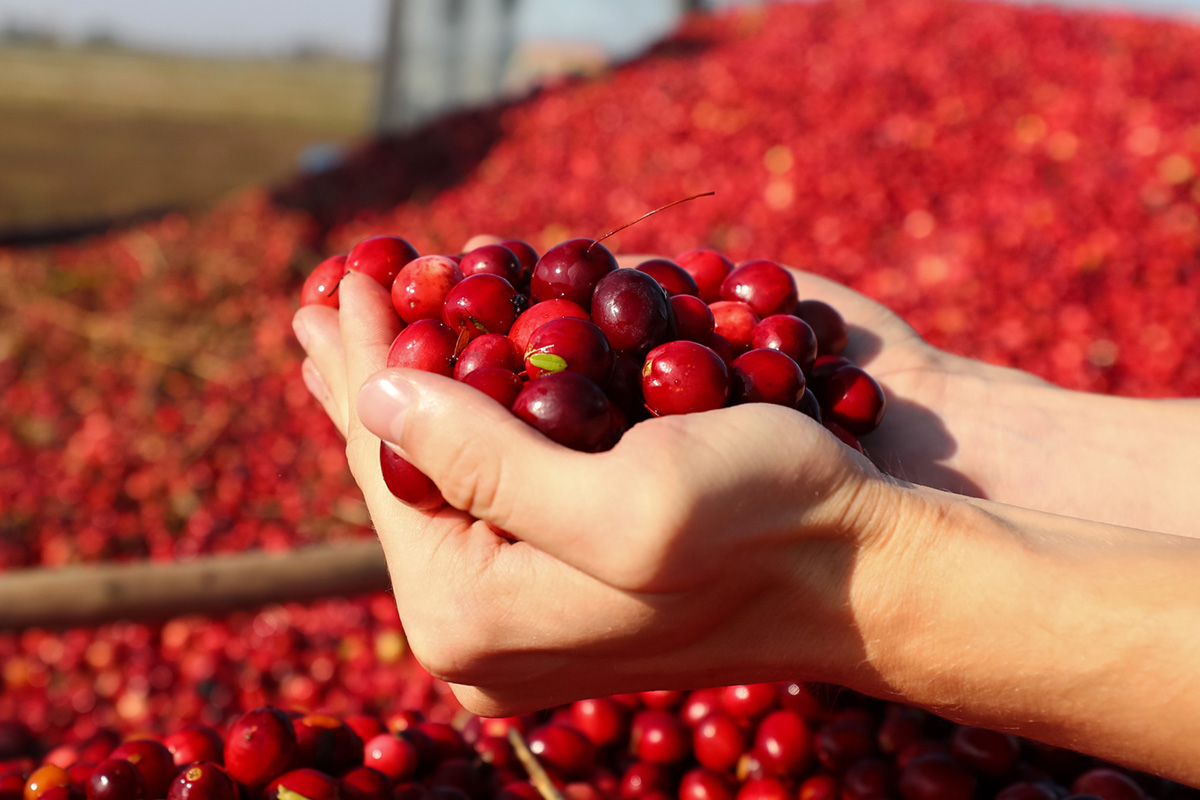 The area is also famous for the largest raised bog in Europe: Yelnya. The unique reserve is more than nine thousand years old. It is beautiful here at any time of the year, but especially in autumn. With the onset of the velvet season, the annoying mosquitoes disappear, and cranberries — the local ‘red gold’ — appear in the thickets of moss. It is believed that the ‘anti-cold’ berry tastes better after frost, but locals don’t wait for cold weather; they take a basket, put on Wellington boots and go out on a quiet hunt. Here you can also walk along the Ozeravki eco-path.
Birdwatching — the most popular area of ecological tourism — is actively developing in Yelnya. Just at this time, flocks of grey cranes soar over picturesque lakes with islets of bizarre shapes. The most successful tourists often see the nesting sites of the rare ptarmigan and the white-tailed eagle.