Representatives of nationalities living in Belarus invited guests to their farmsteads

You are always welcomed

Representatives of nationalities living in Belarus invited guests to their farmsteads

This striking holiday has already become a tradition, the calling card of Grodno. Every two years, representatives of all the numerous nationalities living in Belarus gather here at a unique All-Belarusian festival of national cultures. This year the ‘Grodno carnival’, as local residents call it, celebrated its 10th anniversary.

The Chairman of the Grodno Regional Executive Committee, Vladimir Kravtsov, opened the festival. “Today, representatives of 141 nationalities live in Belarus, including 92 in the Grodno Region. All of them have equal opportunities for the preservation of their own culture, national traditions and spiritual ideals. Many can get an education in their native language. Such people do not feel themselves as national minorities here.” 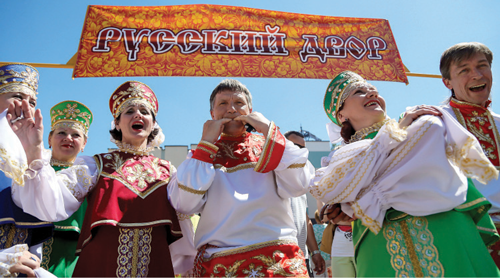 It is especially true, as far as it concerns Russians, and those nationalities, which in public consciousness are inseparably connected with Russia — Tatars, Bashkirs, Chuvashes and representatives of many other nationalities living in Russia. The Russian delegation at the festival is traditionally one of the most numerous, and it is no surprise, after all about one million Russians live in Belarus. And on the national farmsteads, with their pancakes and samovar, sincere songs and incendiary dancing there was no room to swing a cat all day long. It would seem, there was nothing exotic for the Belarusians, everything was native, even normal, but heart reaches out for congenial people. And here spectators already harmonise with Russian national songs performed by the Grodno vocal ensemble Garmoniya, the participant of all 10 festivals, and run out on the stage together with the folklore collective Ivitsa from Mogilev. National dances are so similar, songs and languages are so close that you feel like you’re visiting your relatives, where you are always welcomed and warmed.

Artistes very much tried to ‘inflame’ and show what they are capable of. Dancer, Natalia Kharkevich from Ivitsa did not hide her pleasure from that lively response of spectators on their performance. “Our collective is a frequent guest at festivals in Grodno. This time we again brought our best programme here, which we created in the city centre of culture of Mogilev.”

Guests of the festival were lavish with their applause and gave a standing ovation to artistes of the Brest national chorus Verbnitsa and the Ramonki ensemble. It is hard not to succumb to an atmosphere of general pleasure when you are entertained and treated with delicacies. Old Russian strong men, jingling with armour and smiling from the height of their huge growth, were willingly photographed with guests. It is easy to recollect common roots and that the ancient, ancestral home of the Slavs is on the Belarusian Pripyat river.

The present festival was notable not only for high jinks and plentiful meals, but many masters also showed their abilities in the field of various national crafts. On the Russian farmstead, for example, it was possible to learn the traditional Russian craft of willow-weaving. The master from Molodechno, Gennady Vnukov who is a teacher on willow-weaving, brought amazing souvenirs, and invited all interested people to try to make, for example, a vase from willow. Many people tried, but it was difficult to compete without practice and preparation with a master who has devoted 30 years to his favourite craft!

On the neighbouring farmsteads there were representatives of the Russian Caucasus — Dagestanians, Kabardinians and Balkars. Here it was possible to take in one’s hands a real cold weapon of the horsemen (Dzhigits) and even to receive your own photo in national costume and with the blade in hand. Ramazan Makhmudov showed an unusual exhibition Pride and Greatness of Country of Mountains. He brought daggers, knives, cavalry swords and sabres from Dagestan.

“There is my native land,” tells Ramazan. “While in Belarus I studied in agricultural academy, and for almost 20 years live in Vitebsk. Whenever possible I try to acquaint Belarusians with our ancient culture. As well as the cold weapon of masters of Dagestan, I also bring well-known Tabasaran carpets, jewellery, filigree, embossment, ceramics, copperware and many other things.”

It was impossible to get past the hospitable pavilion of the Tatars and Bashkirs. One did not know where to look as there were so many examples of masterly handwork. In the family of Romuald Yanchenko there are three national skilled craftsmen. “I am Belarusian Tatar,” tells the master who makes items from wood. “While my wife, Tamara, was born in Tatarstan.We have lived together for 45 years. We are here at the festival in Grodno for the second time. For a long time we have made wooden spoons, scoops, other souvenir production in single copies. Our daughter Inna helps us. She began with national straw works, and now she also knits and weaves. And she teaches children her art free of charge.”

In the meantime, in a tent with refreshments was a real feast! The careful mistress of the kitchen, Zaviya Salyakhova stood at the entrance and offered flavoured tea and chak-chak- farinaceous sweetmeats, favourite both among Tatars and Bashkirs. In Russia,chak-chak can be bought in almost any supermarket. Guests tried and enjoyed ochpochmak- potato with meat, qistibi porridge in a filter cake, and alsobekkyan — cheburek with cabbage stuffing.

In general, for connoisseurs of special dishes, the festival turned into a true holiday of gluttony. Chuvashes also treated people with their national dishes. Though Luisa Aleksandrova, one of heads of the international public association of Chuvashes Atal, refused to reveal the secrets of the preparation of their original dish — shorta–made from two stewed rams. However, all who tried it confirmed that it was a real delicacy!

Other farmsteads were no less hospitable: Azerbaijanis offered shish kebab, pilau and lavash, while those who like sweets were treated with shekerbura and rahatlakum. Estonians treated visitors with syir, a variety of cottage cheese, a favourite liqueur from Soviet times‘Old Tallinn’, Baltic sprat and rye bread. Ukrainians, Poles, Gipsies invited people in.

A carnival procession became the festival culmination. Bright, cheerful and well-dressed crowds of Belarusians, Russians, Armenians, Kazakhs, Venezuelans and even Italians and British who took part in the festival for the first time this year, came along to the streets of Grodno. Representatives of 35 nationalities arrived to Grodno. And 18 years ago, at the very first festival, there were just 11 of them.

The Consul General of the Russian Federation in Brest, Nikita Matkovsky shared his sincere delight with the holiday. “I have visited Grodno many times, but now the city impressed me even more. Take the dramatic procession on the central streets and areas, which gathered tens thousands of people! I saw smiles on their faces, felt unusual goodwill and warmth of the residents and guests of the city. Three days of a wonderful holiday flew by in a flash...”

And the most important and main date for Belarusians — the 70th anniversary of liberation from fascist aggressors — passed with festive activities. This theme sounded on each national farmstead. After all, victory in the Great Patriotic War was won together by all the people of the USSR. Shoulder to shoulder into attack went the Russians and Belarusians, Kazakhs and Ukrainians, the Armenians and the Georgians. The liberation of each city, each place was a common holiday. Probably, therefore, when on the main stage under the open evening sky the People’s Artiste of Russia Lev Leshchenko sang the well-known song Victory Day, everyone, thousands of spectators stood up as one.