Polesie Sea was once 1km deep

It seems incredible, since local stone covers the site, but Polesie Sea was once 1km deep, as Belaruskali geologists assure us

It seems incredible, since local stone covers the site, but Polesie Sea was once 1km deep, as Belaruskali geologists assure us. Our planet’s present appearance is quite different to that of millions of years ago. 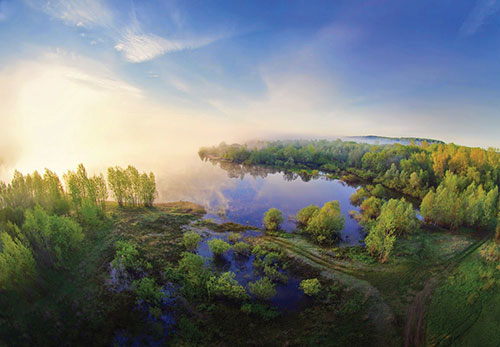 
Polesie was once completely underwater, as proven by rich deposits of potassium salt, stretching towards Ukraine, left behind from evaporated seawater.  Under favourable conditions, up to 5cm of salt can be deposited annually: in some places, the salt layer is over 100m wide and is found to 1km depth.

Two thousand years ago, Herodotus described these Belarusian places in his History: ‘After leaving this lake, the Gipanis River [as ancient Greeks called our Dnieper] is shallow and its fresh water is sweet for five days of sailing. Afterwards, it is bitter for four days — due to a bitter spring flowing into the river. This spring is so bitter that, although insignificant, it makes the Gipanis — a river rivalled by few in length — become bitter’.

In the early 19th century, famous researcher Eremich said, “Belarusian Polesie is probably the lowest part of the European continent. Several millennia ago, it was the deepest area of the diapered ocean but, even now, it is full of life: in spring, almost a third of its territory is covered by water.” Legends state that Polesie’s marshes conceal anchors and ship tools, and that salt water bleeds through some wells.


Pit shafts show multi-coloured veins, reflecting ‘tightly compressed millennia’, while Soligorsk miners produce potassium salt from a depth of 500m or more: the sea floor from 350-400m years ago, when rocks were formed and fish and molluscs reigned. No vertebrates existed at that time, with merostomes — resembling lobsters and scorpions — living in those ‘infant’ years; well-preserved 25cm-long remains have been discovered by workers at Mine 2, at a depth of 640m.

Yelena Isaeva, a Belaruskali specialist, tells us, “Belaruskali’s dressing plants grind down the fossilised remains of thousands of organisms, although observant minors sometimes spot a fossil while cutting, and manage to save it from becoming fertiliser.”

Miners have discovered four merostome fossils, although the remains of the first three fell to pieces under the influence of sun and light. The fourth was ‘luckier’, being covered with a protective layer of clue and spirit and now kept at Belaruskali’s Museum of Labour Glory, neighbouring the claw of another merostome, an ancient fern leaf and some other findings, which confirm that deep and vast Polesie Sea once covered the land.