Nadezhda Kucher, winner of the international opera singer competition at the BBC Cardiff Singer of the World, is ranked alongside those who have stood on the Olympic podium

Singers of the World

Nadezhda Kucher, winner of the international opera singer competition at the BBC Cardiff Singer of the World, is ranked alongside those who have stood on the Olympic podium. To the Olympic Games, however, an entire team is usually sent, whereas in this case, all the expectations are concentrated on one person. We spoke to Nadezhda in Minsk after her triumphant return home where she was looking forward to resting and meeting her relatives. Nadezhda, let’s talk about your victory in the competition Singer of the World, was this your very first attempt?

Two years ago, I sent an application, but only managed to reach the live auditions.

How difficult was the preparation for the competition?

The competition has the status of the best in the world, the most prestigious. It is possible to say that I was preparing for it from the very beginning of my musical education. All my creative life up to that point was preparation in some way for the competition in Cardiff. I had to show different styles, languages and emotions. I hope the programme will be enjoyed by the public, because it is not just a popular event in England, it’s a show for the whole world. I have never sung in front of so many cameras, it was only in the hotel where they did not film you. It was unpleasant for many guys but I tried not to notice it.

You graduated from the Minsk Musical College with a degree in musicology. How did it happen, that you started to sing?

In the 4th year we were to follow an optional course, we could choose any instrument or type of composition so I chose vocal training.

Did you have immediate success?

My first piece of good luck came at the end of the 4th year when I passed the academic examinations with other vocalists, I sang a small programme and I remember being noticed for it at the time. Having graduated from college, I went to work in the chorus of the opera theatre where I spent three years. After that, I entered the St. Petersburg Conservatory, where I studied under Tamara Novichenko. She is a legendary teacher and played a decisive role in my development as a singer.

And how did you become a soloist at the Perm Opera and Ballet Theatre? The Urals are a long way away.

The conductor Teodor Currentzis works there and I went to him not really to Perm. If he had been somewhere else I would’ve gone there to work with him.

Currentzis is a very well-known and talented conductor, but his character is not all sweetness?

Yes, but many of us have difficult aspects of our characters. To produce such a result is complex. I mostly work on Teodor’s projects and we have performed a great deal together! We recorded a track using the music of the French classicist Jean-Philippe Rameau, also ‘The Wedding’ by Stravinsky that will be released soon. I have sung ‘The Requiem’ by Brahms, the ‘Carmina Burana’ by Orff, the ‘Indian Queen,’ all projects on a grand scale that he has designed and conducted, they caused a stir both in Russia, and in Europe.

Do you like the style of work of Currentzis?

We have worked together for a long time, and I decided I needed something else. Teodor does not work in the bel canto tradition, while I always dreamt of it. He does not like French music, while I adore it. 
Do you have a favourite part something that is uniquely to you?

There are many favourite roles but I especially like Marfa in the ‘Tsar’s Bride’, because it was my first big role. My love of opera probably started with it: I was strongly impressed by it, even when I was still at college. When I began to sing, I wanted to sing Marfa. I already knew many entire operas by heart. When I entered the St. Petersburg Conservatory, I dreamt of singing the ‘Tsar’s Bride’ at the conservatory theatre, and when I was in the second year there, I made it.

A great deal! I will shortly sing ‘Lucia di Lammermoor’, in the next year or two, maybe even earlier, who knows? After the ‘Tsar’s Bride’ it was my second favourite opera.

Sometimes in Europe we see radical opera staging. What do you think about it? What is more important for you: classical or experimental approaches?

For me it is important that everything that goes on the stage is logical and practical. Even if you are naked on the stage, it should be justified from the point of view of stage direction. I am not eager to run out naked however, not at all. If a director is looking only for an outrageous performance, it will never be a success.

Do you have to practise much?

When I am preparing for a new role as I am at the moment, I try to practise it every day. I have a month to prepare for the part, which is more than enough. I can learn it in a week if I sit for days on end but I don’t like to do it this way. While I need to learn the material, in respect of vocal practice, if I have a chance to rest, then I keep silent. I was preparing for a month for the competition in Cardiff. The Minsk Musical College gave me a classroom three times a week, where I practised with the concertmaster. When I am at home I have a certain claustrophobia because it is small and the acoustics are not good, there are neighbours and I do not want to torment them! Working at home is always difficult for me, so they really helped by allowing me a room to work in.

Your ties with Belarus and Minsk are not broken then?

My mother, sisters and nephews live here. When I have free time I try to come to visit but it happens only about once a year. I miss Minsk very much, I feel good here.

Do you have a family or any personal plans?

I have a family and my plans do include children. My husband is a musician, beginning his conductor studies at the Moscow Conservatory.

What is in your tour suitcase?

Not much, because I do not like to carry heavy bags. A travel pillow, which I take on the plane, is essential, concert dresses, shoes and sheet music. The rest could be bought wherever I’m going.

Like a real traveller! After all, many people consider that life on stage is full of glamour.

Well, everything sparkles on the stage!

Nadezhda Kucher is a soprano opera singer. She was born in 1983 in Minsk. She graduated from the Minsk Musical College and entered the St. Petersburg State Conservatory under the tutelage of Mikael Glinka. She is a soloist of the Perm Opera and Ballet Theatre. Repeated winner of various vocal competitions and the winner of the BBC Cardiff Singer of the World international opera competition, where she represented Belarus. 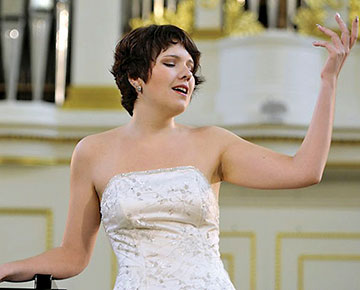