Grodno Region boasts a great many castles, churches and other sites attractive to tourists.

No secrets on nuclear power station

Grodno Region boasts a great many castles, churches and other sites attractive to tourists. Recently, it has also gained the Belarusian nuclear power station site as an ‘attraction’. 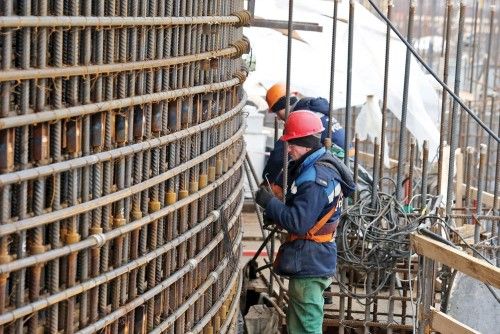 Though still under construction, many are curious to see it; this year alone, it was visited by about 1,300 youngsters — most spending time at the neighbouring sanatoria. Among guests were Russians, members of public organizations and journalists. Some travel agencies even specialize in organizing such tours. Meanwhile, workers at the station are glad to render assistance to visitors, displaying openness in all matters: a cornerstone of contractor Russian Rosatom’s philosophy.

Interest in the station may be due to the fact that, in a couple of years, the location will be subject to high security, becoming prohibited to the public. The grandiose nature of the site is obvious even from many kilometres outside the nearby city of Ostrovets, where the old crossroads has become a super-modern road interchange. One exit takes you to an asphalted road heading straight to the nuclear power station’s construction site: the only one of such a kind in Belarus. From above, the site is about one kilometre square, covered in foundation pits and roads, shops, hangars and storage platforms. The casings for the first and the second reactors are already in evidence.

Naturally, the level of safety at the site is of primary concern. The huge internal and external reactor shells inspire confidence, each treated to deter corrosion, as the Deputy Director General of the site, Andrey Barkun, explains. He tells us, “Site installation of protective covers considerably reduces building time and results in high quality work, since all efforts are then carried out under cover, in comfortable conditions. They need to be assembled as a single structure and under-poured with super-strong concrete. The internal cover is 120cm thick while the external is 80cm. This technology was well developed in the Soviet times and is being widely applied at Novovoronezhskaya nuclear power station, where the same VVER1200 reactors are being installed.”

On the construction site, workers are assembling a ‘straightjacket’ for the first nuclear reactor. It takes 5 minutes to reach the ‘lower ground level’, meaning that the surrounding territory needs to be raised later: by 20m by the end of this year, and 44m by the end of 2016. In the bowels of this steel and concrete well is the ‘melt trap’: a huge thick-walled ‘pan’ able to absorb melted nuclear fuel and other radioactive elements in case of emergency. International experts have praised it as a distinctive feature of the 2006 Russian nuclear power station (category 3+), possessing the fullest set of active and passive safety measures. Nearby are reinforcement bars for the second reactor. 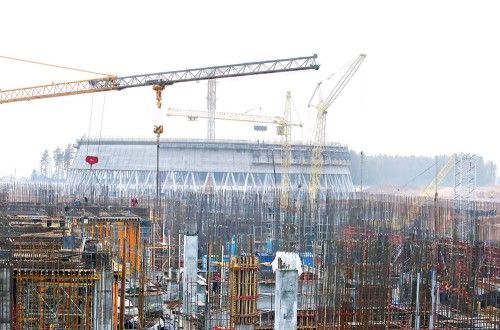 A Liebherr crawler-mounted crane (the largest in Belarus) is on site, able to lift 1,350 tonnes. In throwing back my head to look up at it, my hat fell off! Andrey Barkun tells me, “The height of the reactor casing will reach 76m; in all, it will be at least 90m.”

The complicated reactor design includes protective covers through which pass strong steel ropes, able to compress the massive ferro-concrete construction, to ensure its endurance; even in an emergency, the nuclear reactor cannot explode. Of course, we must trust the professionals, who have the greatest experience: a well-known French company is on site.

Two water-cooling towers are being constructed, each 167m tall: probably, the tallest constructions at the nuclear power station. It’s vital to be able to pass cooling water around the reactors, sourced from the nearby River Vilia, on which neighbouring Lithuania’s capital Vilnius stands. Mr. Barkun stresses that local residents will be safe, as Belarus’ Research Institute for Complex Use of Water Resources has investigated the matter.  He notes, “Water could be taken to cool eight reactors without damaging the river, and we will have only two. Besides, the station will have a closed cycle of water circulation, to reduce the volume of water required and prevent its return to the river. The forecast is for the first reactor to become operational within four years, and the second — by 2020: construction is on schedule or even ahead.”

Russian suppliers are providing equipment with a long cycle of manufacturing and about 20 percent has been already delivered to the construction site. Every month, 3,200 workers and qualified professionals carry out works costing $60 million: unique across  the whole Belarus!

Once operational, there will be 2,300 employees at the nuclear power station, trained in using the complicated equipment. The Deputy Chief Engineer, Vladimir Gorin, underlines, “We’ve already taken on almost 400 people to the staff of the future nuclear power station. Many have experience of working at nuclear power stations in Russia, Ukraine and Lithuania. Meanwhile, four leading Belarusian universities have developed training for nuclear experts. This year, we’ve employed 20 young graduates from corresponding departments, many of whom have spent time training at Russian nuclear power stations. We’ve also made arrangements for another 600 workers across 45 major specialities to train and retrain. We’ll benefit from youth, experience and knowledge.”

Mr. Gorin adds that two modern residential micro-districts are being constructed, to house those working at the future station in Ostrovets. Soon, the new school and kindergarten will receive their first children, and a new hypermarket is to open.